Protesters march on Nigerian parliament after army threatens to step in 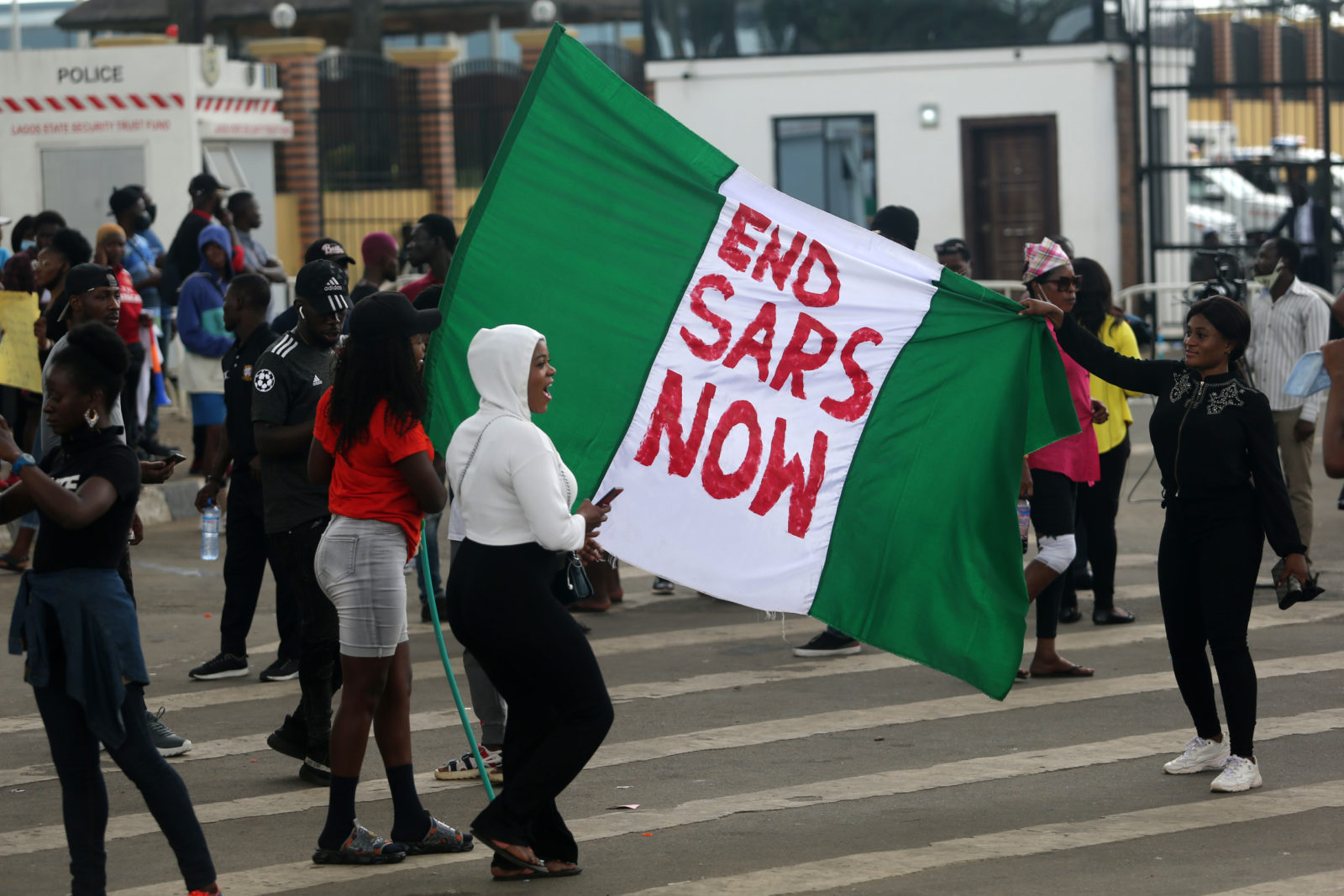 epa08748621 Protesters hold a Nigerian flag with an inscription during a protest against the Nigeria rogue police, otherwise know as Special Anti-Robbery Squad (SARS), in Ikeja district of Lagos, Nigeria, 15 October 2020. During the last week, the Nigerian federal government yielded to a call by the Nigerian youth calling for the disbandment of SARS, for its public harassments, innocent killings of citizens, and other unethical conducts. But an announcement of a new police squad--Special Weapons and Tactics (SWAT), by Nigeria's police chief has sparked a new wave of protests across Nigeria from the beginning of this week. Protesters say agitation against police brutality is only an entry point to address other social and political issues such as corruption, official ineptitude to public accountability, and government inefficiency. EPA-EFE/AKINTUNDE AKINLEYE

LAGOS/ABUJA, Oct 15 (Reuters) - Hundreds of protesters marched to the gates of Nigeria's parliament on Thursday, hours after the army said it was ready to step in and restore order after more than a week of demonstrations against police brutality.

The protest defied a ban on mass rallies in the capital Abuja that the government said was imposed earlier on Thursday to stop the spread of the coronavirus.

Video on social media appeared to show men coming out of a bus and chasing protesters, though Reuters could not verify the footage.

“We have suffered enough. We youths want to stand – no more brutality,” one demonstrator, Obinna Paul, said in another part of the city where crowds blocked a toll gate funnelling traffic to and from the main airport.

Lagos state governor Babajide Sanwo-Olu said on Twitter he condemned the attacks on peaceful protesters “by armed and unscrupulous elements trying to cause chaos”.

“The NA (Nigerian Army) is ready to fully support the civil authority in whatever capacity to maintain law and order and deal with any situation decisively,” it said.

Protesters have staged daily marches since Wednesday last week, calling for an overhaul of police forces.

Police had responded to the demonstrations with beatings, tear gas and gunfire, which human rights group Amnesty International said had killed at least 10 people. But the police agreed on Tuesday to stop using force against protesters.

In response to the protests, the head of Nigeria’s police force on Sunday dissolved the Special Anti-Robbery Squad (SARS), a unit that demonstrators have accused of beatings, killings and extortion.

Demonstrators have called for more meaningful reforms. Protesters say they fear a new unit, whose creation to “fill the gaps” left by SARS was announced on Tuesday, was just a rebranding of the squad.