By Centre for Analytics and Behavioural Change• 15 October 2020 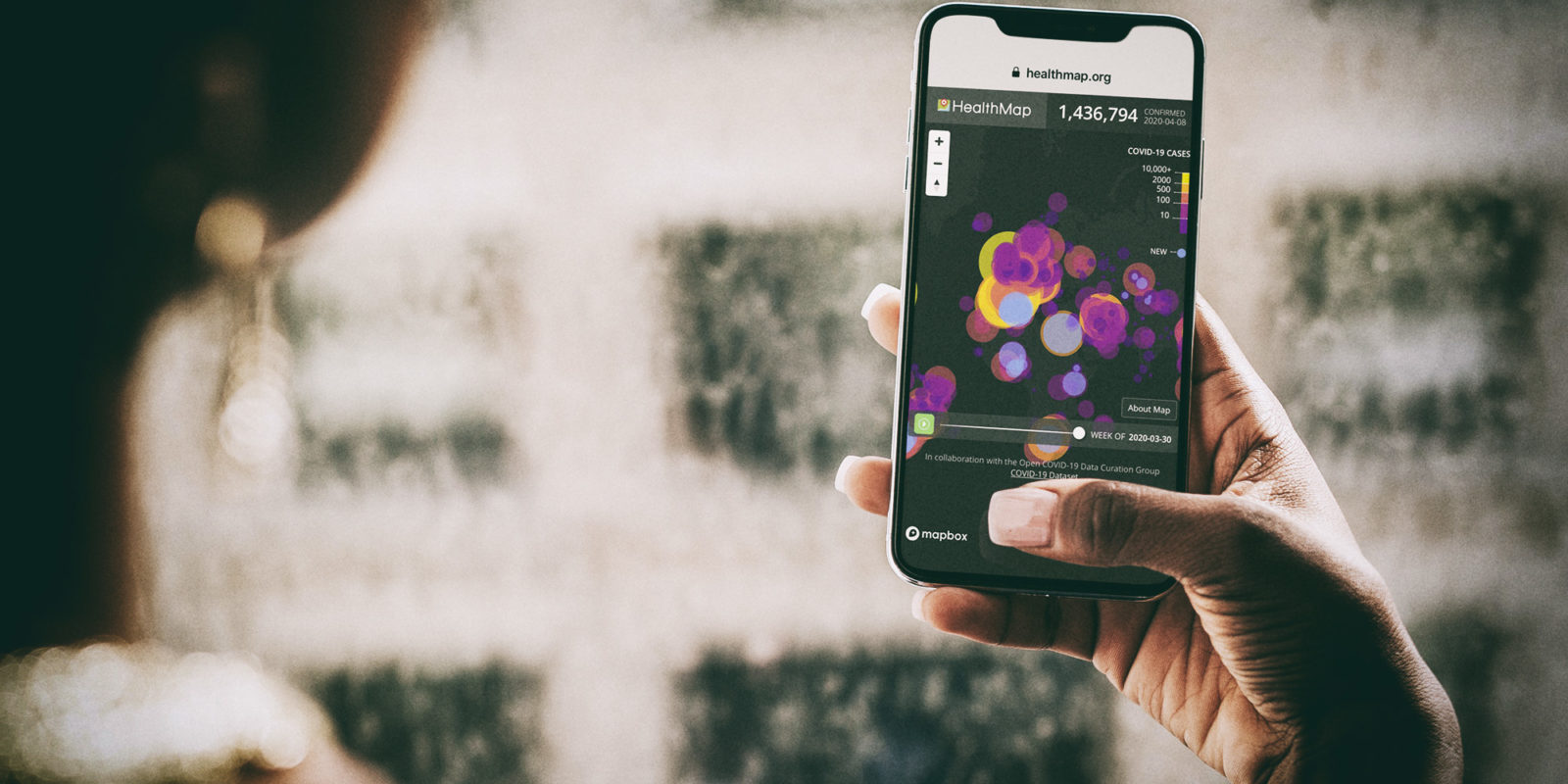 This is a summary of the trending, highest impact, and most active themes and their narratives related to social cohesion and division in South African public-domain social media conversations from 7 October to 14 October 2020.

A marked police vehicle turned upside down and burnt by an angry mob has turned the tables on the pattern of protest in South Africa.

The scene: the street outside the Senekal Magistrates Court where Sekwetje Mahlamba and Sekola Matlaletsa were appearing last week in connection with the murder of farm manager Brendin Horner.

The protesters: a group of armed white farmers campaigning against murders on farms and making allegations of corruption against local police.

The outcome: videos identifying the protesters toppling the parked police van and burning it set social media on fire for days. One angle showed police walking away from the scene. Nobody in the mob was arrested for destroying public property that day. Soon, Twitter account holders began comparing this hands-off police response to the handcuffs-on response to the #FeesMustFall movement.

(Andre Pienaar, a resident of Senekal, was arrested in the wake of the unrest and appeared in court on charges of public violence and attempted murder on Tuesday this week.)

Bonginkosi Khanyile, who was arrested and imprisoned for his involvement in the #feesmustfall protest, tweeted a video of the rampaging Senekal protesters and said: “Only for using a mere slingshot in a #FeesMustFall protest I got 6 months direct imprisonment and I am currently serving 3 years house arrest. White people storm inside the court of law & damage property. No arrest, no tear gas, no @SABCNews to call them hooligans. #FarmMurders”. This post was retweeted more than 1,800 times.

Later, @BeynonSammy tweeted: “Yet #KanyaCekeshe was arrested, convicted & sentenced for (allegedly) doing the same thing. In addition, he & thousands of others of (us) students were labeled ‘hooligans’ & ridiculed.” @_African_Breed_ responded: “Everyone knows how that would’ve played out had it been Africans burning police vehicles”.

@EFFSouthAfrica shared a video of crowds being dispersed at the #FeesMustFall protest, saying: “When the youth called for #FeesMustFall and the black artists appealed #VulaPresident they were met with police brutality. Today, the arrogance of white supremacists was met with no resistance.”

@TimesLIVE tweeted: “Police say they did not take action against a rampaging mob of farmers who stormed a court and torched a police vehicle in the Free State because the situation could have led to innocent people losing their lives.’’ Retweeting this post, @drtlaleng pointed out that this meant that the miners at Marikana, protesters at #FeesMustFall events, Andries Tatane and Collins Khoza did “Not qualify as innocent people losing their lives”. Her post was retweeted more than 1,700 times and received more than 2,000 likes. 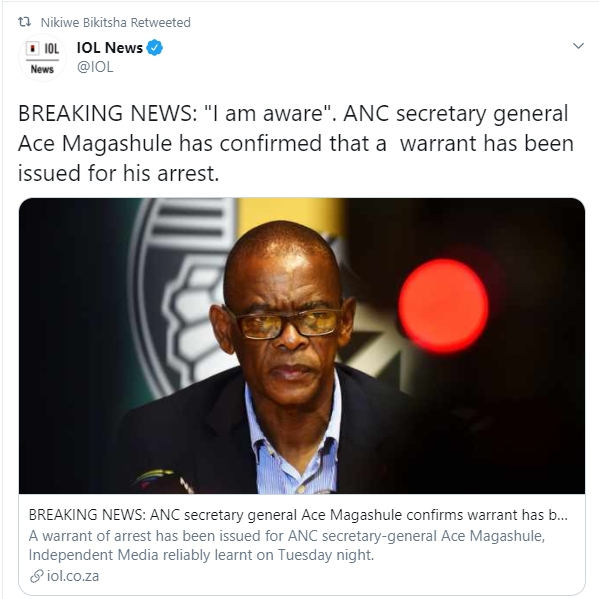 ANC Secretary-General Ace Magashule trended on social media after reports that the Hawks had their eyes on arresting him.

While@Vince_Monak claimed that this was a campaign tactic by the government, @RobertShivambu tweeted that the arrest made sense because of his alleged implication in the Estina Dairy Farm Corruption case.

Later that day, @FraudeWatchZA tweeted an official statement from the Directorate for Priority Crime Investigation (Hawks) distancing themselves from the earlier news reports.

But @Maps_pj was not convinced and claimed that this was not fake news — the Hawks were concealing information. Adding to the confusion, the secretary-general warned the Hawks that there was no need for a “media spectacle” if there were any criminal charges to be brought against him. Earlier this week @SABCNews tweeted that the NPA had received a letter from Ace Magashule’s lawyers “seeking guarantees that, should the prosecuting agency want to arrest him, he be informed and allowed to hand himself over”.

Confusion prevailed on social media, with @Sentletse claiming that the Hawks should arrest Ace Magashule as soon as possible and @Raszen questioning the grounds for his arrest.

In recent weeks, hashtags intended to bash foreign nationals have been spread widely on social media, often allowing xenophobia and hate speech to masquerade as nationalism.

One “bashtag” — #16OctoberCleanSA — has gained traction among proponents of the #PutSouthAfricansFirst movement. The hashtag started gaining traction on 25 September and began to peak on 9 October. The PSAF has presented a list of 10 demands, ranging from border security to the end of government assistance to foreigners.

The #16OctoberCleanSA was associated with several tweets blaming foreign nationals for the situation in South Africa. @Thabelo_PSAF also claimed that foreigners were responsible for farm killings in South Africa. This author was called out by@AfriLegacy and@Jill91341160 for exaggeration and bias in their posts against foreigners.

After 3 October the volume of #16OctoberCleanSA dropped from 1,396 mentions to 335. @Lerato_Pillay tweeted that Twitter had blocked the #16October CleanSA from the trend list, indicating that the people behind the uLerato Pillay account are measuring the metrics of the platform and using it to drive their xenophobic rhetoric. The fake persona, who was recently exposed as dismissed soldier Sifiso Gwala, called for social media users to make the hashtag trend again. The volume of mentions started rising again, peaking on 9 October with 1,899 mentions. 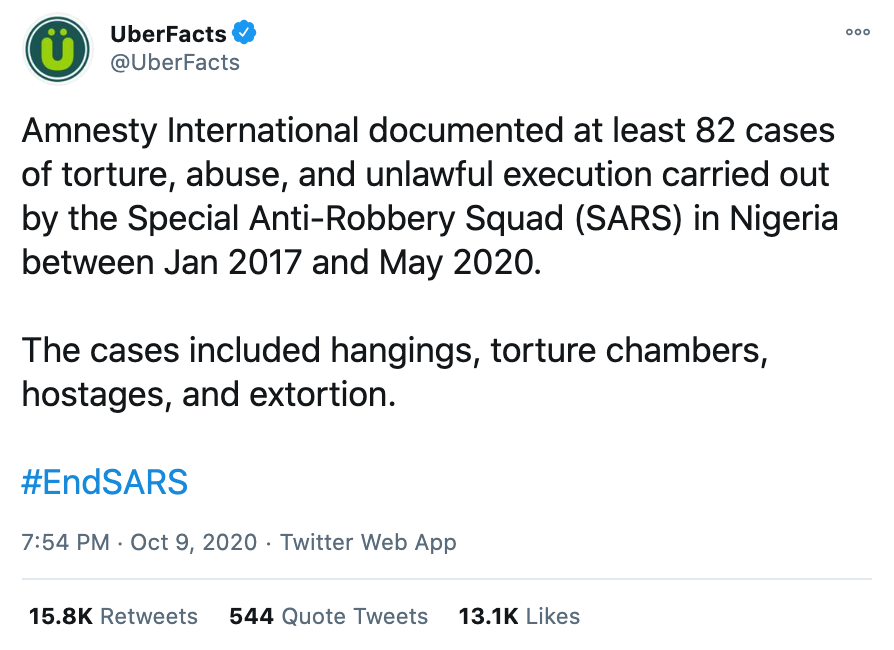 The protests against Nigeria’s Special Anti-Robbery Squad, commonly referred to as SARS, indicates the power of social media to forge social change.

The youth of Nigeria started the campaign using the hashtag #EndSARS, calling out the police brutality, violence and kidnapping by the Special Anti-Robbery Squad.

The social media campaign progressed into protest action with Nigerian citizens taking to the streets to call on the government to disband SARS.

Kingtaldee shared pictures of people who had lost their lives at the hands of SARS, saying: “If police brutality doesn’t mean nothing to you, take a look at these faces, they’re no longer with us. Their lives cut short by these men who are supposed to protect. They deserve justice, they deserve to live. We must #EndSarsNow for them. #EndSARS #EndSARSImmediately.”

Mobile applications like Siri were used to share locations if protesters felt endangered during the protests. Wanz tweeted: “Just created a Siri Shortcut that sends my location to a number of people. All I need to do is say “Hey Siri, End Sars” if I suspect I’m getting stopped by Sars. #EndSARS #EndSarsNow. #EndPoliceBrutality.’’

Last Sunday, after two days of protests, the Nigerian government announced the disbandment of SARS and the creation of the Special Weapons and Tactics Team.

The #EndSARS campaign gained international attention with celebrities across the world pledging their support for the people of Nigeria.

Solidarity protests were organised in Dublin, London and Germany. People in Uganda, Namibia and South Africa took to social media to show their support.

A strong antidote to the prevailing wave of xenophobic rhetoric came from South African politician Mmusi Maimane, who tweeted: “We are interconnected as brothers and sisters, as neighbors and as Africans. That’s is why #ZimbabweanLivesMatter , #EndSARS and #ShutItAllDownNamibia are important calls. The youth of Africa are speaking up and we must help them get their voices heard.” DM

The Centre for Analytics and Behavioural Change (CABC) is a non-profit organisation based at UCT’s Graduate School of Business and incubated by the Allan Gray Centre for Values-Based Leadership. It was established to track and counter mis- and disinformation, fake news and divisive and polarising rhetoric that is promulgated online to undermine social cohesion, democratic integrity and the stability of nation-states.