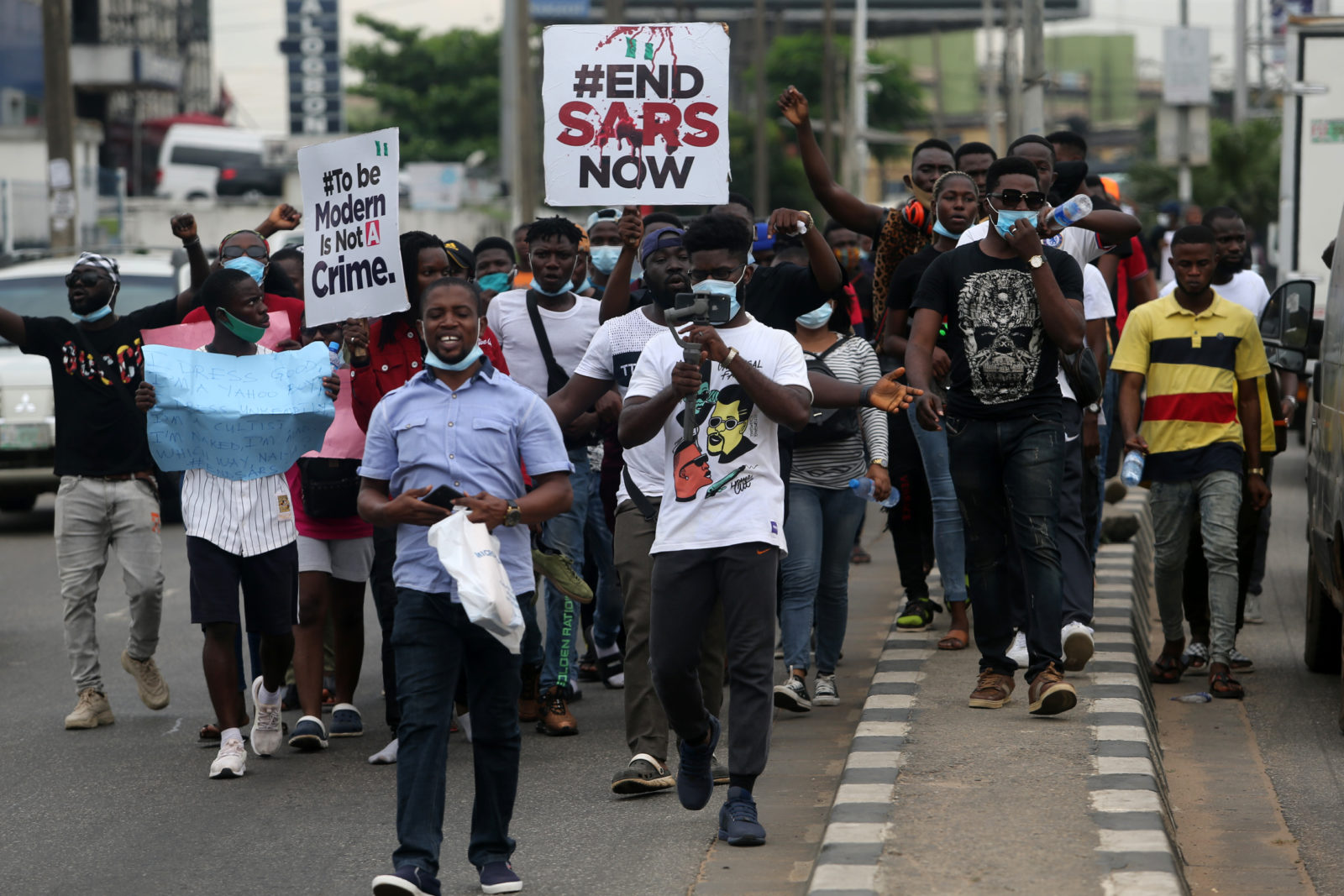 Protesters hold banners as they walk along a road during a protest against the Nigeria rogue police, otherwise know as Special Anti-Robbery Squad (SARS), in Ikeja district of Lagos, Nigeria, 09 October 2020. EPA-EFE/AKINTUNDE AKINLEYE

The #EndSARS (End Special Anti-Robbery Squad) protests in Nigeria are a call for massive reforms not only in the police institution but also the wider security sector that involves counter-terrorism.

If there is an African country that should understand the relationship between heavy-handed responses by law enforcement and the escalation of violence, it is Nigeria. The country is yet to grasp how extortion, torture and extrajudicial killings continue to produce a cycle of violence.

For decades, the police body responsible for protecting citizens from these acts has been the chief offender. This has sparked recent nationwide protests against a police-led Special Anti-Robbery Squad – more commonly known as SARS.

The protests are motivated by the need for accountable and responsible policing, as well as an overhaul of the security sector. Days of demonstrations led to an initial disbandment of SARS by the Inspector General of Police. Despite this, atrocities by the banned police unit have persisted and some citizens have lost their lives in the process.

Counter-terrorism in Nigeria suffers from the same problem that plagues policing. Extrajudicial killings of civilians with impunity by security forces are among the factors that have misguided the country into a decade-long counter-insurgency against Boko Haram.

The first leader of the group, Mohammed Yusuf, died in police custody. The brutal crackdown by the military that followed led to thousands of legal cases related to violent extremism which the criminal justice system is still struggling to process.

Despite disproportionate budgetary allocations to the security sector, counter-insurgency operations have had limited success. Analysts have consistently pointed to the role of conflict entrepreneurs as one explanation.

The #EndSARS protests come on the heels of similar incidents across the continent and globally, with agitations against police excesses. Institute for Security Studies (ISS) analysis of police abuses in South Africa during the Covid-19 lockdown and George Floyd’s death in the United States are sober reminders. Beyond police reform, these protests should also seek accountability for offending security agents implicated in illegal and criminal actions.

Nigeria’s President Muhammadu Buhari has in the past unjustifiably labelled the youth as lazy. The #EndSARS demonstration tells a different story. Young people are the frontliners of the ongoing campaign on social media and on the streets.

They demonstrate leadership in a way that challenges the mainstream vertical structure of power. Resourceful young medical practitioners, lawyers, freelance media startups and food vendors are offering free services to the protesters and injured. Voices of influence in the music and movie industries have amplified the demonstrations which have spread across several countries in Europe and North America.

The Buhari administration cannot afford to ignore citizens’ calls for accountability in the security sector. The courage to admit failure to ensure reform is as essential as the political will to take urgent steps. A press release on the dissolution of SARS by the Inspector General of Police is simply a cosmetic change.

Deep-seated structural problems in the security sector require an assertive intervention by Nigeria’s leaders. This is not the first time that reform has been attempted and in a sense, SARS is a virus that has adapted itself over the years.

Fortunately, a template exists to start the revamp – the Nigeria Police Act 2020. It is clear on human rights concerns, community police forums, the rule of law and oversight matters, among other guidelines. However, reform shouldn’t stop here. Structures should be set up to investigate illegal activities of SARS and other security entities, with a view to prosecuting individuals where necessary.

Security sector agencies should recognise that the #EndSARS campaign is not aimed at defending civilians only. The lives of thousands of police and military personnel have been lost fighting street crime in the cities, or in the forests of Sambisa in battles against Boko Haram. Security force personnel are also victims of a system that discredits them, and the campaign can serve their interests too. Using heavy-handed tactics against protesting civilians is counter-productive.

Nigerians, and particularly the youth, have been pushed to the edge. This explains why the prevailing character of the ongoing protests transcends ethno-religious boundaries. Citizens should persist with the demonstrations – the time is right and shouldn’t be wasted.

But they shouldn’t stop at the #EndSARS protests. Demands should include urgent government attention to armed banditry, and most importantly, the Boko Haram crisis. The nationwide campaign should be rearticulated to include all these concerns.

The current period is symbolic in more ways than one. October is the month when Nigeria commemorates independence from colonial rule. What better way to honour the rightful demands of citizens who have stood by the country despite 60 years of challenges? DM