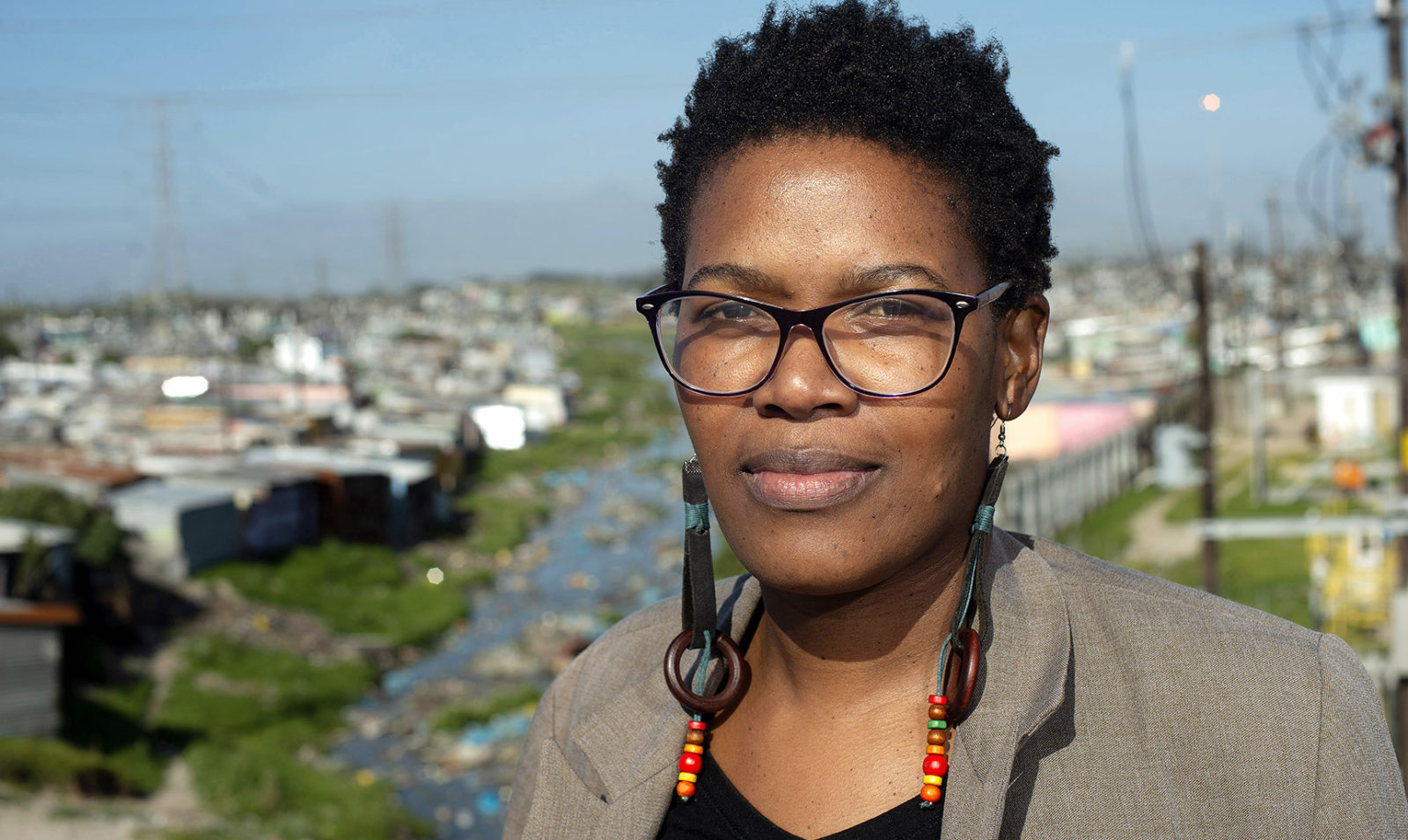 ‘People aren’t voiceless. It’s just that their voices aren’t listened to.’ The question of voice comes up several times in conversation with interim director of the Social Justice Coalition Mandisa Dyantyi. She says she has sometimes come up against resistance from men when she has asked whether, for a while, only the women be allowed to speak. She believes strongly that people know what they want and know how to articulate their needs. They just aren’t given enough spaces and opportunities in which to speak for themselves.

Mandisa Dyantyi, interim director of the Social Justice Coalition, speaks in a measured way that is at once thoughtful and open. Her warm tone is assured and even. So when she exclaims for the first time during a one-hour interview, the exclamation mark is almost as visible as an emoji on social media.

She’d just been asked to imagine what she would do in a world in which the problems of inequality and poverty did not exist, a utopia that would render her work null and void.

She laughs and says it again.

“I would sing! I’m not that good. I know my mom tried. She wanted all her children to be singers and the other four are amazing singers. I’m the black sheep of the family. But I can hold a note. So, in that world, where there is justice, I would get a voice trainer, get those vocal cords good and strong, and I would sing!”

There is little time for anything besides work and family, though. The past three years have been intense for the 36-year-old activist.

First, there was an unexpected nomination, a mere year after starting work at the SJC as a political education coordinator, to become the new deputy general secretary, then there was the birth of her twins in 2018.

Yet, when she connects to a Zoom meeting from her Kuils River, Cape Town home early on a weekday morning, there is no flurry or rush. The children are with her mother, who runs a day-care centre, and her husband is working in another room. If she has high stress levels — and it’s hard to imagine that her work is anything but emotionally and intellectually taxing — she is one of those for whom it doesn’t manifest outwardly in anxious tics, fast-talking or sudden, sharp pitches.

The SJC, a membership-based social movement made up of several branches across Cape Town, works to advance the constitutional right to life, dignity, equality, freedom and safety, particularly for people living in informal settlements. This work has brought the organisation into conflict with the City Of Cape Town, especially in the past few months, when homelessness has increased due to job losses that resulted from the lockdown.

The SJC’s stated mission is clear, however: research, education and advocacy. The organisation focuses on two main areas: sanitation, budgets and urban land in its local government programme, and policing and criminal justice in its safety and justice programme. Since people in townships are always drawing the short straw on services others take for granted, it is a given that the SJC will rub the powers-that-be up the wrong way.

So, when Dyantyi is asked what she does outside of work, she responds, after a pause, with, “Maybe there isn’t much ‘outside of work’. My husband does similar work, so every conversation ends up being about the situation of black people and we find ourselves thinking through strategies.”

Service and community are the ground in which Dyantyi’s feet are rooted. Her parents were both Pentecostal pastors.

The downside of having pastors for parents was the expectation to provide an example for other kids, “which is an unfair burden on a child”. The other downside was the prescribed ways of being a woman: quiet and submissive.

“I learnt to quiet down those parts of me that wanted to challenge and question until I was a teenager when I was really struggling to be the kind of girl I was expected to be. For the longest time I had been wondering why, if God is a loving God, who created me, He is so offended by the type of person I am that I need to shush myself for me to be acceptable.”

The upside of Dyantyi’s family circumstances was that her parents were very open-minded.

“So I could have these discussions with them in a very limited way because you don’t want to insult God or insult their faith.

“My mum, as much as she doesn’t have the language for it, is a feminist. She was the one person I knew who would always challenge the status quo, so I guess my questioning comes from her. My dad, on the other hand, is a god-loving man who is quiet and possibly the most patient person I know. So even if he disagrees with you, he is going to allow you the space to say your part and will disagree with you gracefully.

“They really are the best parents. That’s what strengthened me to speak up, because there was that sort of space at home.”

A consultative approach is a complex and demanding one, and while the world she hopes to leave behind for her children — a world in which she will have the time to sing — is still far off, she is undaunted. Her family of origin grounds her, her new role as a mother focuses her, and her unending spiritual questioning gives her direction.

When she was just about to start primary school, her parents moved from Johannesburg to Mfuleni, close to Khayelitsha. For a girl already bothered by the unfairness of gender roles, she suddenly found a new puzzle to consider: geographic inequality. She wouldn’t have had those words for it, but she observed the experience of it.

“I was always interested in how my neighbourhood looked compared to what it was like when we went to town. The moment you pass Langa and the airport, you begin to see a different world from the one you are used to, right? I always wondered why that was, but also, I think more importantly, I always wondered why I never felt like I belonged to the cleaner and more well-put-together side of the city.”

She spent most of her high school years in Queenstown, where her parents had been called to service.

“Like most kids growing up in townships or rural areas, you want to study and work hard so you can get out and build a better life for you and your family.”

A set number of careers was presented in high school as possibilities for economic liberation, and these required excellence in the sciences, mathematics and accountancy. The humanities, she said, were considered lesser subjects. She excelled at accountancy and had her heart set on becoming a chartered accountant, only to discover that her maths mark wasn’t good enough.

A bit of academic fumbling later — running out of money, not knowing about student grants — she ended up as a student of Public Administration at the University of the Western Cape. A series of strong, engaged and encouraging lecturers, like Dr Namhla Matshanda, Professor Cherrel Africa and Professor Joelien Pretorius, led her to discover an abiding love of politics, particularly because it connected the dots for her on the things that had been troubling her since childhood.

She went on to work for the defunct Institute for Democracy in South Africa (Idasa), the Open Society Foundation of South Africa, the Catholic Parliamentary Liaison Office and the Economic Justice Network.

“They were all doing amazing work. But I felt removed from what I really wanted to do, which was to work in the communities like mine, so when an opportunity came in 2016 at the SJC for an education coordinator, I applied.”

Not even a year later, she was asked whether she would accept nomination for the position of deputy general secretary for the organisation, and was thrust, a little helter-skelter, into the demands of a political position in a democratic organisation, as well as into leadership.

The SJC’s work is essentially in partnership with communities.

“If there is a problem, we ask people what they want to do. If there is flooding and people are sitting with water in their shacks, what is it that people with water in their shacks want to do, and how do we partner with them in achieving what they want? Sometimes we do not agree with what communities think the solution is and we will respectfully say that we can’t partner with them.

“The truth of the matter is that people are frustrated. They have been waiting and sitting in squalor for a long time. I stay in Kuils River now. To go to one of these new occupations and tell people with urgent needs to be patient, feels disingenuous because I’m going back to my comfortable home.

“So for me, it’s important to be humble and to be always willing to take leadership from people.

The question of voice comes up several times in conversation with Dyantyi. She says that she has sometimes come up against resistance from men when she has asked whether, for a while, only the women be allowed to speak. She believes strongly that people know what they want and know how to articulate their needs. They just aren’t given enough spaces and opportunities in which to speak for themselves.

A consultative approach is a complex and demanding one, and while the world she hopes to leave behind for her children — a world in which she will have the time to sing — is still far off, she is undaunted. Her family of origin grounds her, her new role as a mother focuses her, and her unending spiritual questioning gives her direction.

Her questions with and about God are not only philosophical, but political too.

“When I was young, I used to joke with my friends that the word “submission” offended me. Why would I work so hard to be the person I think I can be only to just submit all of that under a man. How can I understand god to be more than a man — a white man — sitting in heaven waiting for the day he’s going to charge us all for being terrible people.”

What gives her hope is the power of people coming together. What exhausts her is “just that we have to do this work”.