Farmers, stock thieves and the police: Battle lines are drawn in Free State 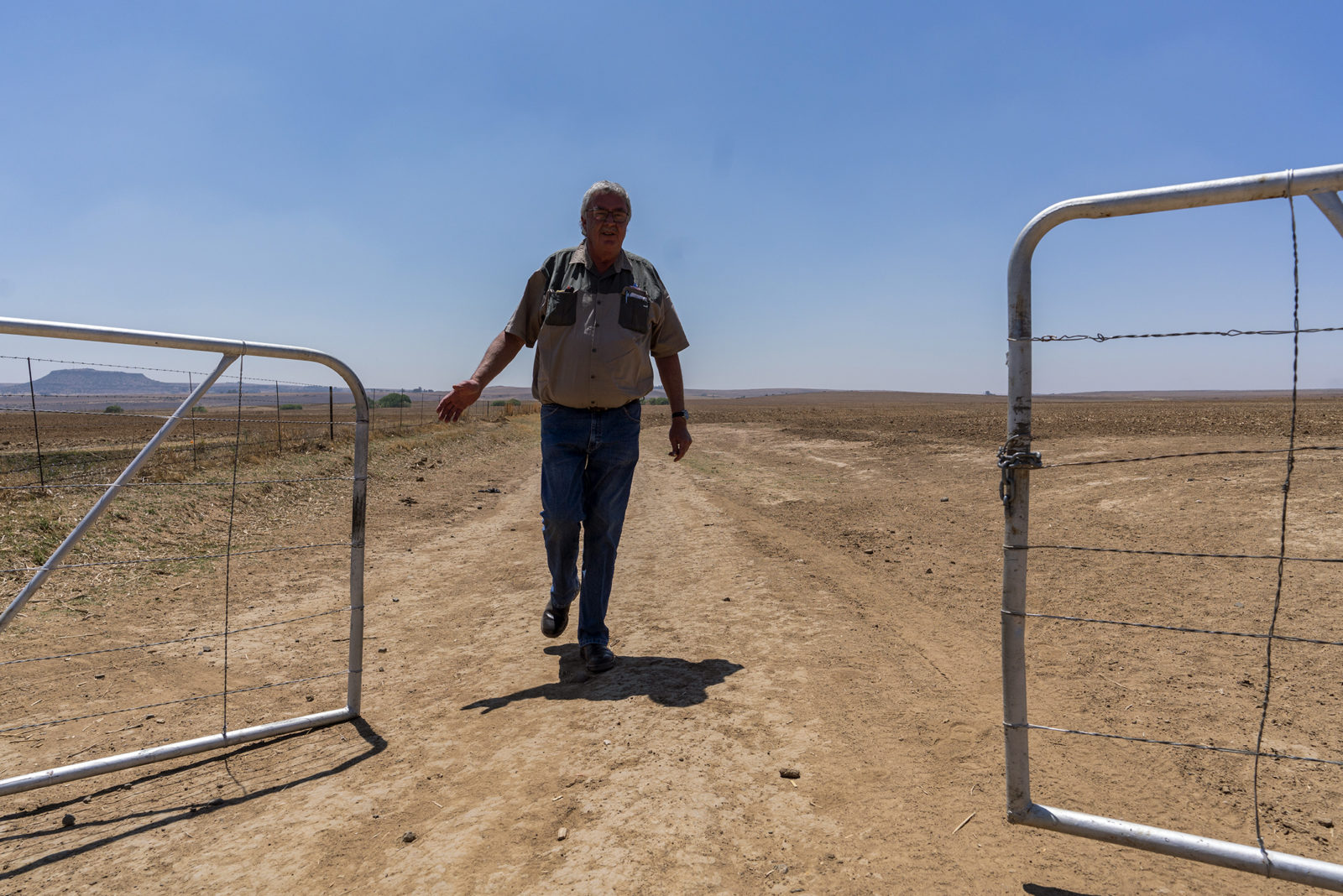 Brendin Horner’s employer and family spokesperson Gilly Scheepers at the scene where Horner’s body was found tied to a fence post. ‘We are human beings just as you guys, and at this stage we are having a tough time in South Africa,’ said Scheepers. (Photo: Shiraaz Mohamed)

The police are corrupt, say farmers on the receiving end of crime, which they insist is not race-driven. But for the many unemployed and desperate, theft is a way to survive.

“How much do you know about farming?” asked Gilly Scheepers, standing on the road between two fields on his Bloukruin Farm in Paul Roux, eastern Free State, before describing the murder of 21-year-old farm manager Brendin Horner.

Scheepers pointed to the dirt where he found trails of blood where he believes Horner was overpowered by stock thieves, stabbed, strangled and tied to a fence post with a nylon rope.

No one seems to know why Brendin Horner was so brutally murdered, but many claim to know the cause.

Farmers in the region believe it was the culmination of the police and justice system’s failure to act on stock theft in an area with high levels of unemployment, where stealing livestock has become a career for some, one with apparently few consequences.

The quiet towns of Paul Roux, Senekal and Bethlehem have made national news as Horner’s death and a subsequent protest by farmers, most of whom were white, turned violent, with politicians and church groups warning it could heighten racial tension.

The murder slots into unfounded claims of white farmers being targeted due to their race. The protest at the Senekal Magistrates’ Court last week, where the two men arrested for Horner’s murder appeared, has been portrayed by some as an example of white farmers having double standards and acting with impunity.

At the time of writing, groups such as the EFF, AfriForum and Institute of Race Relations were arriving in Senekal ahead of the suspects’ court appearance on Friday 9 October.

Both black and white farmers in the area dismissed race as an issue when it came to crime on the farms. They said theft was common and criminals often intimidated and sometimes assaulted farmers and farmworkers, but Horner’s murder was unprecedented in the area.

“Unfortunately, what’s happening now is that this whole court thing and Senekal is busy taking everybody’s eyes from the ball,” said Scheepers.

“The community must fight this thing [of crime]. It’s not a black and white thing.”

Fani Mashinini, a farm owner who two years ago narrowly escaped criminals on his farm, said: “I don’t think we should look at this as a black and white issue but pure criminality and brutality, because criminals see no colour.”

He was speaking outside the Mitz Agricultural Union Hall in Bethlehem, where Police Minister Bheki Cele and State Security Minister Ayanda Dlodlo met with farmers on Tuesday. Inside, rows of burly farmers sat in the church-like hall, a John Deere clock on the wall.

They said the police did not act on reports of stock theft and charges against suspects who were arrested rarely stuck. Farmers accuse the police of working with the thieves and they submitted a dossier to Cele, which he said he would have to have translated from Afrikaans, with specific allegations against SAPS members.

Farmers have established their own security groups, which are expected to work closely with the police under the Revised Rural Safety Strategy, but they say police often act against them when they apprehend suspects, confiscating their firearms for pointing them at the alleged thieves or accusing them of racism.

Cele promised to look into the allegations and return within 21 days to discuss concrete plans to address stock theft and alleged police corruption.

“Everybody’s angry. I mean, it’s been carrying on for how long? And it’s not only the white people that’s being killed, the black people that are killed – it’s just as bad,” said part-time farmer and Bethlehem Rural Safety Committee member Eduard Marais.

During the meeting, Cele chastised journalists and commentators who perpetuated the myth that the violence was part of an anti-white agenda. He called out farmer Jess de Klerk by name, saying he was sceptical about some of his comments but thankful he rebutted attempts at race-baiting in a recent interview.

“I’m away a lot and now you ask, is my wife and children safe at home? That is really worrisome,” said De Klerk, the chairperson of the Senekal Safety Association, after the meeting.

“You’re angered, frustrated because you feel like nobody is listening to us,” he added.

De Klerk described the stock thieves in the area as a highly organised syndicate who sometimes scouted for stock while hunting on farms with their dogs.

There are different theories about where the stolen stock is sold. Some people say it’s sold in nearby areas, head-by-head, or delivered to butcheries in areas as far away as Gauteng. Others say stolen livestock is herded across the Lesotho border.

Police arrested Sekwetje Mahlamba, 32, and Sekola Matlaletsa, 44, in the township in Paul Roux the day after Horner’s body was discovered. They were allegedly found with blood-stained clothes. One of the murder suspects, it’s unclear which, had previously been arrested 16 times and convicted four times, including for stock theft, while the other had been arrested twice.

A soccer stadium sits at the entrance to Fateng tse Ntsho and a cemetery spans the hill overlooking the township.

Johnny Maseko, a local politician who chaired the area’s community policing forum for 17 years, wasn’t surprised when he heard about Horner’s murder or the suspects who were arrested. He had been tracking them for years, trying to pin them for stock theft, but he claimed the local police were both incompetent and corrupt.

“The police, as things stand, they are parasites sucking our blood for free,” said Maseko.

He said the area’s economy “is depressed like any other township” with few opportunities for unskilled youth. Some got work on the farms or driving trucks “but others choose stock theft as a career because of this environment that allowed stock theft to thrive”.

Tsietso Radebe, who runs a mechanic business out of his home in Fateng tse Ntsho, with car parts hanging from the walls and ceiling of his garage, was worried crime in the area could heighten racial tension.

“Our children will consider racial tensions as a way of life. This cannot be right, we should be moving away from these things because they resonate with the legacy left behind by the apartheid regime,” he said.

A 61-year-old farm worker, who said he enjoyed good relations with his boss, said the recent crimes had exacerbated divisions. “White farmers and generally white people no longer respect black people because of the barbaric and senseless killings,” he said.

Church leaders held a prayer meeting at the Senekal Showgrounds this week, preaching in Afrikaans and Sesotho. They asked the 100 people there to pray for unity and against violence and division. Attendees said it was important for South Africans to unite behind a shared vision.

Nearby, a 23-year-old from Matwabeng, on the edge of Senekal, who did not want to be named, asked: “Did you hear about the farmer that was killed?

“I have been looking for a job since 2013. I have also tried to find a job in the farms but the boers always tell me that they already have enough people.

“In the same year, I together with four of my friends decided enough was enough and went to one of the farms with the intention to rob,” he explained.

He said he stole jewellery and other items and fled when he realised he had triggered the alarm.

“I know many guys from the township steal cattle, goats and sheep but that is risky because it can be daunting to drive the herd out of the farms,” he said.

“If things do not improve, I will be forced to go to the farms to steal copper if they refuse to give it to me when I ask them politely.”

According to annual crime statistics, recorded cases of stock theft in Free State declined between 2018/19 and 2019/20 by 6.9% to 3,785. This is in line with national statistics, which recorded an increase in the crime since 2015 but a decrease last year.

Back at the site of Horner’s murder, Scheepers, who appeared tired of the repeated media interviews, said the community desperately needed jobs and the dignity that employment offered. He employs 240 people but said he could employ more if the national minimum wage was lowered.

After a virtual meeting between farmers and Chief Justice Mogoeng Mogoeng this week, Scheepers sent him a text message calling for a reduction in the minimum wage so farmers could employ more people.

Scheepers said the meeting with the chief justice emphasised the importance of love. “I mean, we as Christians, the only thing that we have to see is love thy neighbour,” said the farmer.

While there’s no short-term resolution for the area’s economic troubles, many of the farmers believe Cele’s intervention will help combat crime in the area.

“It is unfortunate but maybe the loss of a young man’s life will bring peace and stability in the farming community in South Africa,” said Scheepers. DM168