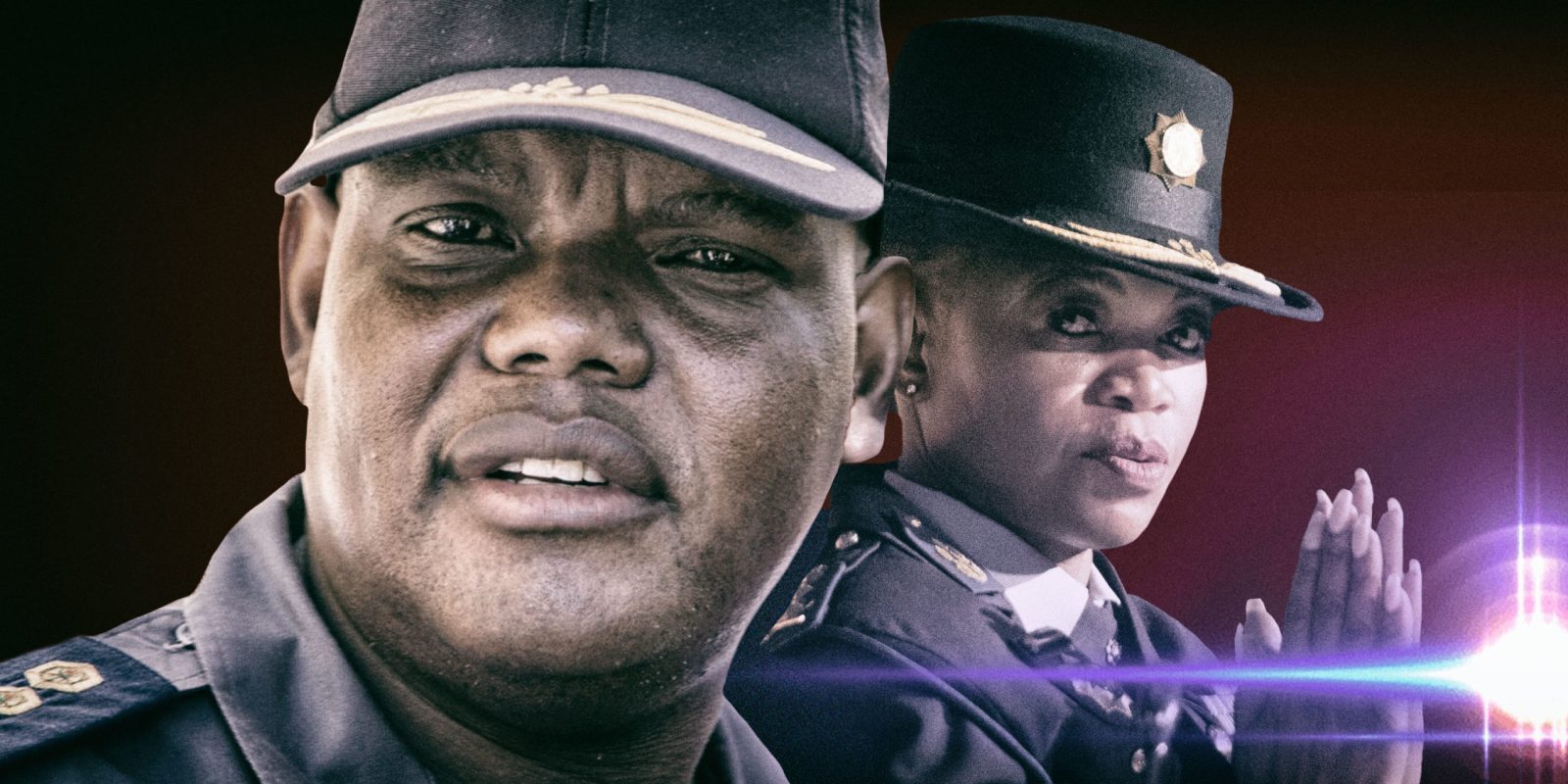 The 15 suspects have all appeared in the Specialised Commercial Crimes Court in Gauteng earlier this year and will face a whopping 390 counts of fraud and corruption amounting to about R200-million.

The indictment, signed by the National Prosecuting Authority’s (NPA’s) Investigative Directorate head Hermione Cronje, is meticulous, detailed and thorough. Those who have perused it have remarked on its quality. In other words, it is a watertight case.

In the mix of the top echelons of the SAPS who have been implicated in the massive fraud involving blue light tenders is Divisional Commissioner SAPS Supply Chain Management (SCM) and head of the SAPS Bid Adjudication Committee (BAC), Lieutenant-General Ramahlaphi Mokwena.

The 168-page charge sheet shows that soon after his appointment as acting National Commissioner on 14 October 2015, Phahlane set to work.

First, he withdrew a 24 March 2010 circular which required all bids above R500,000 be processed through the office of the National Commissioner.

Instead, Phahlane appointed Mokwena on 1 March 2016 to the BAC and empowered the committee to award contracts above the threshold value of R500,000.

At the end of that month, Phahlane appointed Mokwena as chairperson of the BAC.

Mokwena had been appointed on the recommendation of a panel “notwithstanding the fact that he scored third place behind two other candidates rated as better qualified by the panel”, reads the indictment.

On that panel were Phahlane, Mgwenya and Lieutenant-Generals Berning Ntlemeza, Stefan Schutte and Gary Kruser.

The setting the corrupt cops found themselves in at the time was ripe for the picking.

This all happened in the lacuna of the expiry in 2014 of an SAPS contract to procure emergency equipment for vehicles with no new contract in place.

However, the National Treasury had in place a “Transversal contract” for procurement of emergency warning equipment for emergency vehicles, including police vehicles, from 2015 to 2017, so it sort of covered a base or two.

The indictment sets out how the SAPS had attended all meetings hosted by the Treasury relating to specifications and the bid evaluation process in the procurement.

The Treasury had also hosted a separate meeting with SAPS in relation to Category 2 of the tender: Emergency Warning Lights (EWL).

At no stage, notes the indictment, did SAPS express any objections to the process or the suitability of these specifications.

Not only was Manthata’s business not discussed by the panel; he didn’t even apply for the tender.

Nonetheless, he was awarded it.

Here’s how the deal went down.

The SAPS, after receiving bids, decided that it did not want to participate in Category 2 and that “the wrong sample had been used for purposes of the tender”.

In August 2016, Phahlane signed a letter to the Chief Director: Transversal Contracting in the Treasury about the RT4-2015 tender.

The national commissioner said the SAPS was in the final stages of tweaking specifications and that it had, in fact, decided to establish its “own contract” for blue lights.

On the same day, the Chief Director: Transversal Contracting at the Treasury responded, granting SAPS permission to establish its own contract.

And so the feeding began.

Approval was based on reasons provided in the letters of Phahlane and Mokwena dated 12 August 2016 and 19 August 2016.

Prior to August 2016, SAPS had already attempted two procurement exercises that had failed.

In the 2016/2017 financial year, the Gauteng SAPS SCM had identified the need a to equip “all newly acquired motor vehicles with integrated warning lights and sirens and allocated an amount of R10-million for this purpose.”

The first request was issued in April 2016 and four responses were received for the initial request for proposals issued.

On 11 May 2016, Mokwena intervened in the first process, instructing that it be started afresh.

By the time the matter reached the BEC, it had decided that only Instrumentation for Traffic Law Enforcement was compliant.

“On 8 August 2016, Lieutenant-Colonel J Boonzaaier was contacted first by Lieutenant-General Mgwenya and then Lieutenant-General Phahlane who had both instructed him to meet with Manthata and to assist him in bidding for a portion and/or the complete SAPS National Emergency Blue Lights and Siren tender” reads the indictment.

Phahlane had requested Boonzaaier to contact Mokwena and Mgwenya and arrange a meeting which subsequently took place at the SAPS Academy Pretoria West on the same day (8 August 2016).

“Boonzaaier met Accused 13 [Manthata], Accused 11 [Judy Rose] and Accused 12 [Samantha Andrews] at Manthatha’s offices  to draw up specifications (for a specific part relating to high-performance vehicles) which would render Instrumentation for Traffic Law Enforcement  the only viable supplier.”

The tweaking took place over a few days as the specifications “were tailor-made to suit the blue lights imported by Accused 14 [Instrumentation for Traffic Law Enforcement].

“None of the persons involved in the compilation of the specifications were authorised by the PFMA to do so” the indictment states.

On 11 August 2016, an information note was addressed to Phahlane to request approval “to accept and utilise the specifications compiled at the premises of Accused 14 [ITLE] for purposes of inviting written price quotations for blue lights from suppliers”.

Phahlane approved the specification on 14 September.

The following month, on 7 October 2016, the Gauteng Provincial SCM issued its third request for quotations in which suppliers were asked to quote, based on “the manipulated specification for emergency warning equipment”, notes the indictment.

On 9 November 2016, the BEC convened to consider the quotations received despite objections from the three suppliers

Ramanjulum and Thomas Marima were members of the Bid Evaluation Committee (BEC) and its submission to the BAC was that Manthata’s quote be accepted.

The BAC, chaired by Mokewna, approved this despite objections.

Accused No 6 in the indictment, Major-General Ravichandran Pillay, National Head of SAPS Procurement, was a member of the BAC. He had been aware that there had been “serious objections to the process that had been followed, because he was told so in October 2016 by Capt. De Beer”.

Mokwena and Major-General Nombhuruza Napo, Deputy Provincial Commissioner of Gauteng, both knew “as they had met to discuss the objections, and decided to proceed anyway. When the quote was approved, no objections were raised.”

And so on 14 November the deal was signed and sealed.

No written service level agreement was concluded with the supplier by either the Gauteng SAPS or the SAPS at national level.

But it didn’t stop there.

The bringing to book of this high-profile cabal of officials who captured the country’s police service is a significant victory in rooting out the corrupt who have compromised the safety of every South African while they looted.

During March 2017 Lieutenant-General Deliwe de Lange, Provincial Commissioner of Gauteng SAPS, initiated communications with Manthata in relation to the procurement of emergency warning equipment for the 2017/2018 financial year. This she did after contacting Phahlane.
On 29 June 2017, an order for an amount of R39,896,189.94 was issued to  Manthata and his company by Gauteng SAPS on the instructions of De Lange and Napo.

De Lange and Napo were granted “procurement authorisation” by Mokwena and Ramanjalum without following the prescribed procurement processes.

In exchange for helping to loot the state, these top SAPS officials were paid in cash, in kind, through the use of “courtesy vehicles”, TV sets, bond payments and clothing.

Investigators traced cash deposits to the bank accounts of almost all of those SAPS members accused:

“Copies of the bank statements of Accused 2 [Mokwena], Accused 3 [Ramanjalum], Accused 4 [De Lange] and Accused 5 [Napo] reveal that each of them received cash into their bank accounts the source of which is not disclosed by them in their mandatory disclosure forms,” reads the indictment.

On 27 October 2016 Accused 7 [Phahlane] received payment of R27,500.00 for the purchase of clothes from Surtee Esquire (Pty) Ltd trading as Grays Clothing Store and payments totalling R230,800.00 made to Roberto Botticelli on his behalf.

They did this while Buthelezi had acted “in accordance with the prescripts of the law”.

Meanwhile, back in 2017, on 3 May, Phahlane as acting National Commissioner of the South African Police Service and its accounting officer, submitted the signed-off SAPS annual financial report to the Treasury and the Auditor-General as prescribed by the PFMA.

“He failed to disclose the irregular expenditure incurred in respect of payments to Accused 13 and/Accused 14,” reads the indictment.

And now, we are here.

In the dock with the SAPS budget having been shortchanged by millions by top cops in a position of trust and authority.

The bringing to book of this high-profile cabal of officials who captured the country’s police service is a significant victory in rooting out the corrupt who have compromised the safety of every South African while they looted.

The trial of the 15 is expected to start in November. DM