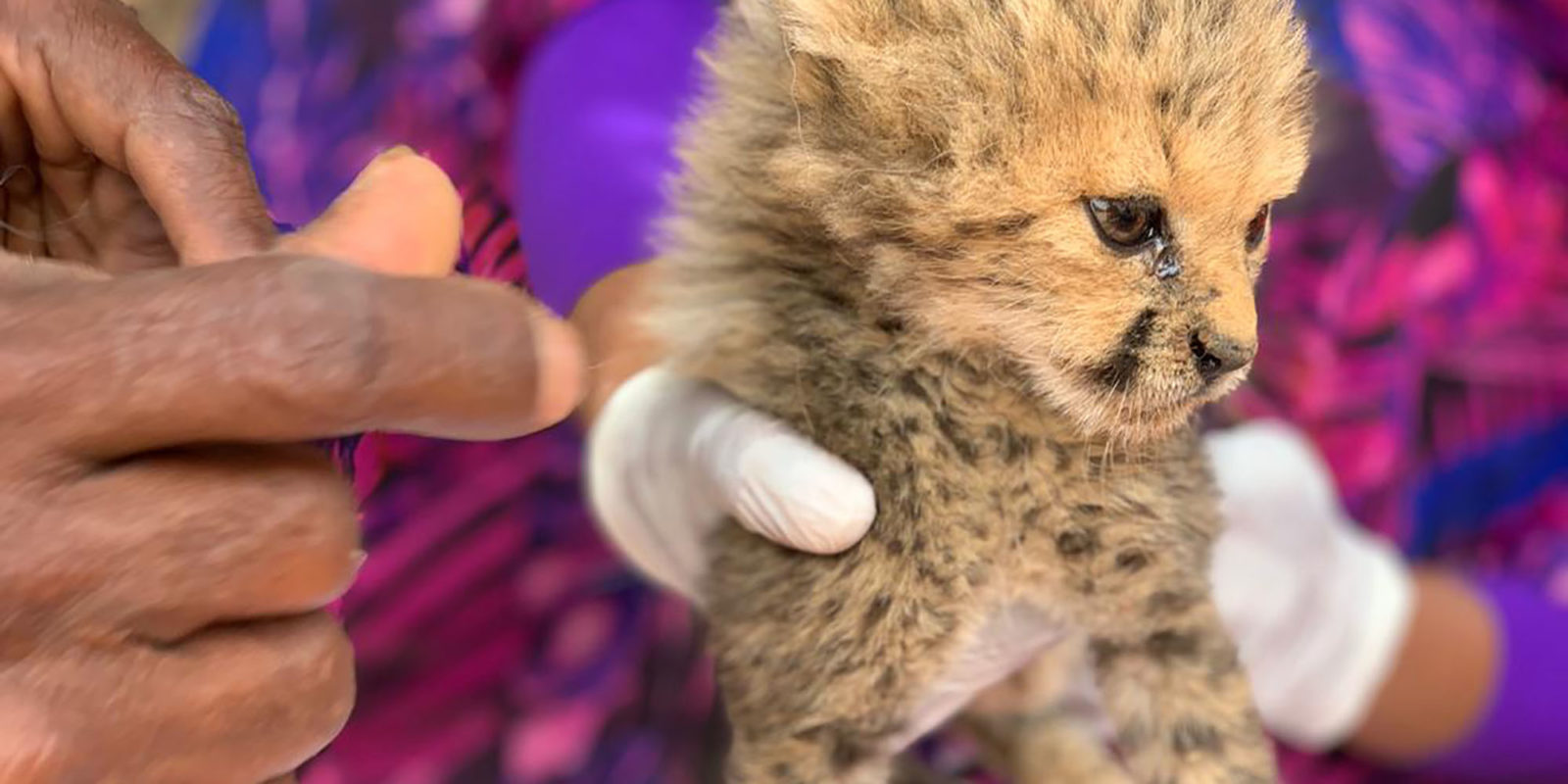 A cheetah cub receives care from representatives of Somaliland’s Ministry of Environment and Rural Development, in a village near Erigavo, Sanaag, in August 2020. According to reports, the cubs were being held by local farmers who surrendered them to the authorities, as the result of conflict with the mother cheetah near their livestock. (Photo: Twitter / Ministry of Environment and Rural Development)

A recent spate of cheetahs being seized in Somaliland has shown that the illicit demand for these animals remains strong. Cheetahs are highly prized as exotic pets in the Gulf states, and in supplying this market, traffickers have heavily impacted local cheetah populations in Africa, a situation compounded by the fact that many animals die en route.

In late July, two cheetah cubs were rescued from a 25-day ordeal at the hands of wildlife traffickers by the Awdal region police in Borama, a city in Somaliland not far from the Ethiopian border. Members of the local community helped look after the dehydrated and underweight cubs until the rescue team arrived. The cubs were then given care by Cheetah Conservation Fund (CCF) staff before being transported to a CCF safe house.

These cubs were part of a series of recent seizures of cheetahs in Somaliland. Through July and August, 20 cheetah cubs were rescued over five missions jointly conducted by the ministry of environment and rural development, the Selel regional administration and the Somaliland police, with support from the CCF and Torrid Analytics.

On 14 September, two cheetah cubs were seized in the Sool region in the south-east: the youngest was only two weeks old. In total, 25 cubs have been reported as seized or rescued in Somaliland so far this year.

Cheetah trafficking in Somaliland is not a new issue. Since 2010, when reporting became more consistent, there have been 193 rescued or surrendered cheetahs. Nearly a third of these occurred after the country ratified its Forestry and Wildlife Conservation Law in August 2018, which has reportedly led to increased awareness and better coordination between wildlife officials, police and the army.

Many of the cheetahs seized in Somaliland are believed to originate in Ethiopia, which shares an 800km border with the self-declared state. At least 25% of seized cheetahs in Somaliland have been found at or near the Ethiopian border – the two cubs intercepted near Borama in August, for example, were less than 15km from the border.

Cheetah cubs are mostly taken from the wild when the mother hides them to go hunting, either opportunistically by nomadic herders or by poachers. A cub can sell for between $200 and $300 in Somaliland, although prices vary greatly: an unhealthy cub can be bought for as little as $80, while a healthy, older cub can cost up to $1,000. The same cheetah can be sold for up to $15,000 in the Gulf states.

Mortality is high, as most cubs are removed from the wild at only two to eight weeks from birth and are subjected to maltreatment and poor nutrition in the hands of poachers and dealers, compounded with the rigours of the trip across the Gulf of Aden. While difficult to estimate, it is thought that more than 60% of cheetah cubs die before they reach the market to be sold.

Somaliland is vulnerable as a conduit for the illegal wildlife trade not only due to its proximity to the Arabian Peninsula’s wealthy consumer markets for exotic wildlife, but also due to the country’s rampant poverty, weak legal frameworks and a lack of environmental awareness.

Corruption also drives the cheetah trade. There are instances of illegally obtained cheetah cubs being sold back to smugglers by corrupt officials after a confiscation has been reported. That being said, Somaliland’s cheetah trade has been more extensively researched than other countries and regions of Somalia. Its relative importance as the main cheetah trafficking route into the Middle East might be in part connected to underreporting from other countries.

Across the Gulf of Aden

From Somaliland, cheetahs are transported by boat – hidden in hampers, crates or cardboard boxes – from the northern coastline across the Gulf of Aden to Yemen at an estimated rate of 300 cubs per year. The 140 nautical miles between the ports of Berbera in Somaliland and Aden in Yemen can be covered in just over seven hours at a dhow’s average speed of 20 knots.

Once in Yemen, cheetahs are reportedly transported by boat or road across the Saudi border to animal markets such as Al-Jazan or Al-Khouba, or delivered to Saudi traders, who will then offer them throughout the Gulf states to known buyers on ecommerce and social media platforms such as Instagram and Snapchat, or, more recently, through private chat groups.

Research carried out by CCF researchers found that at least 2,000 cheetahs had been advertised online between 2010 and 2019. Most were found on Instagram, with sellers offering cheetahs in Saudi Arabia, the UAE and Kuwait.

Delivery to the UAE, Qatar or Kuwait from Saudi Arabia can be made by road or air. An investigative report published by Le Figaro quoted an employee at the Kuwait airport who stated that:

“It is enough to mention that they are ‘cats’ on the box and to pay certain people I know. It is easy for me because I work there and I know who will take the money. I give them between KWD500 and KWD1000 ($1,600–$3,200 to allow illegal animals (through the country).”

There have also been isolated reports of cheetahs arriving in Oman from Yemen, as well as being transported from Oman into the UAE via the Hatta border crossing.

Cheetahs have long been popular household pets or hunting companions in the Gulf states, where they are viewed as status symbols. This popularity has been boosted in recent years by wealthy or famous individuals posing with their exotic pets on social media.

However, few cheetah owners know how to provide the proper care for these animals, with some social media posts advertising cheetahs that have been declawed – an extremely painful process for the animals.

Many pet cheetahs in the Gulf states do not live beyond the first year, and few live longer than five years, according to information collected by CCF.

Trade in wild cheetahs for commercial purposes is illegal in all the Gulf states, either through the states being party to the Convention on International Trade in Endangered Species (CITES) or through domestic legislation.

In December 2016, the UAE enacted a law banning the private possession of exotic and dangerous pets, although only one seizure (of four cheetahs) has been made since 2015, suggesting that the ban is seldom enforced.

In Kuwait, where no cheetahs have been seized in the past five years, the National Assembly approved a draft animal welfare law that penalises illegal trade or possession of predators in December 2015. In Qatar – where discussions continue over a law regulating the trade and ownership of dangerous animals – the ministry of municipality and environment announced the arrest of an Arab national in July 2016 for trading in cheetahs.

Under CITES regulations, however, captive-bred cheetahs can be traded commercially by registered facilities. The CITES trade database reports that 16 “captive-bred” cheetahs were exported into Armenia from Bahrain and the UAE between 2009 and 2015.

However, the probability that cheetahs in the Gulf (both those kept as pets and those exported) are truly bred in captivity or traded in compliance with national laws or CITES regulations is low.

First, only two such registered breeding facilities exist worldwide – both are in South Africa.

Second, cheetahs do not breed well in captivity. Based on information from the International Cheetah Studbook, a voluntary register of captive cheetahs worldwide, the first report of captive-bred cheetahs in the Gulf states was in 1994. Since then, six facilities have reported a total of 304 cheetah births in captivity, with a 31% mortality rate for cubs under six months.

No births have been reported by these facilities since 2016.

The issue of the illegal cheetah trade has been on the CITES agenda since 2013, when it commissioned a study that led to decisions and recommendations aimed at reducing demand and encouraging international collaboration. However, the 18th Conference of the Parties (CoP), held in August 2019, voted to delete these decisions based on a report from the standing committee to the secretariat.

The report concluded that the illegal cheetah trade was limited, based on official seizure reports from nine countries that cited 32 specimens (13 live, 19 parts or products) between 2015 and mid-2018. Based on this, the CoP agreed that matters related to the illegal cheetah trade could be addressed by a Big Cat Task Force, jointly run by CITES and the Convention for Migratory Species, which is currently in the process of being implemented.

However, Kenya and Ethiopia – two cheetah-range countries – argued that the numbers reported by CITES “underestimate the full extent of the trade, since they only include confiscated animals appearing in official records and omit data from many countries, including key primary source countries for trafficked cheetah”. They cited information showing 393 cheetah specimens (274 live animals and 119 parts), including the 32 seized specimens reported to CITES, during the same period.

The countries’ joint statement – submitted to the CITES CoP – went on to add: “Given the perilous state of [East African] cheetah populations that are the source of illegal trade, any ongoing trade in wild cheetah is alarming.”

The recent spate of seizures in Somaliland seems to confirm those fears. The illegal trade in wild cheetahs appears to be continuing apace, with potentially grave consequences for East African cheetah populations. DM