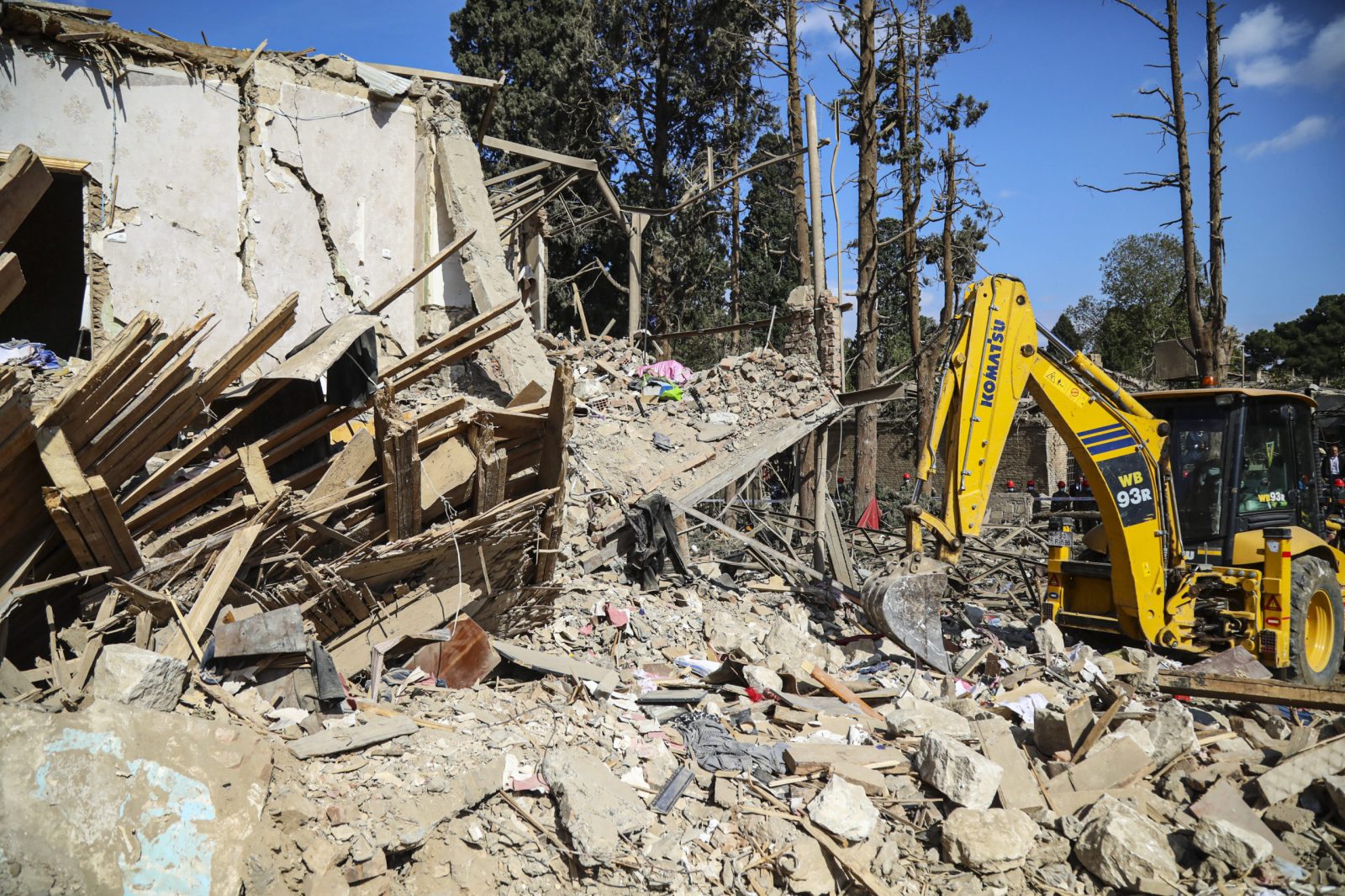 epa08735902 Azerbaijan rescuers work on the devastated houses allegedly damaged by recent shelling in Ganja, Azerbaijan, 11 October 2020. Foreign Ministers of the Republic of Azerbaijan and the Republic of Armenia, with the mediation of the Russian Federation in Moscow, reached an agreement on compliance with the humanitarian ceasefire from 12:00 on 10 October 2020. Armed clashes erupted on 27 September 2020 in the simmering territorial conflict between Azerbaijan and Armenia over the Nagorno-Karabakh territory along the contact line of the self-proclaimed Nagorno-Karabakh Republic (also known as Artsakh). EPA-EFE/AZIZ KARIMOV

BAKU/YEREVAN, Oct 12 (Reuters) - Azerbaijan and ethnic Armenian forces accused each other on Monday of launching new attacks in and around Nagorno-Karabakh, increasing strains on a two-day old humanitarian ceasefire intended to end heavy fighting over the mountain enclave.

Russia, which brokered the ceasefire, appealed for both sides to respect it and Luxembourg reiterated European Union calls for Turkey, an ally of Azerbaijan, to do more to secure an end to hostilities that have killed hundreds of people.

The fighting, the deadliest over Nagorno-Karabakh in over 25 years, is being watched closely abroad partly because of the proximity of the fighting to Azeri gas and oil pipelines and the risk of regional powers Turkey and Russia being dragged in.

Both Ankara and Moscow are under growing pressure to use their influence in the region to end the fighting.

The humanitarian ceasefire is meant to allow ethnic Armenian forces and Azerbaijan to swap prisoners and bodies of people killed in two weeks of fighting over Nagorno-Karabakh, which is internationally recognised as part of Azerbaijan but governed and populated by ethnic Armenians.

But the ceasefire has frayed quickly. Azerbaijan said on Sunday it launched airstrikes against an Armenian regiment, following what it said was an Armenian rocket attack on an apartment building. Armenia denied carrying out such an attack. {nL8N2H105C].

On Monday, Azerbaijan’s defence ministry said Armenian forces had tried to attack its positions around the Aghdere-Aghdam and Fizuli-Jabrail regions, and were shelling territories in the Goranboy, Terter and Aghdam regions inside Azerbaijan.

Nagorno-Karabakh said its forces had inflicted losses on Azeri forces and that large-scale military operations were continuing in the Hadrut area of the mountain enclave.

Reuters could not independently verify the reports.

Kremlin spokesman Dmitry Peskov said Russia, which has a defence pact with Armenia, was monitoring the events and asked Azeri and ethnic Armenian forces to respect the ceasefire.

Accusing Azerbaijan of ceasefire violations, Mnatsakanyan said: “We want the ceasefire, we want verification mechanisms on the ground, which will indicate the perpetrator, which will demonstrate the party, which is not faithful to this ceasefire.”

Speaking before a meeting of EU foreign ministers in Berlin, Luxembourg’s foreign minister, Jean Asselborn, urged Turkey to do more to end the latest flare-up of the decades-old conflict.

“Turkey has not called for a truce yet, and I believe they are completely wrong with this position,” Asselborn said.

“I think the message from Luxembourg will be a call on Turkey, a NATO member, to help arrange a ceasefire quickly.”

Azeri President Ilham Aliyev repeated calls for Turkey, which has voiced strong support for Azerbaijan since the fighting began, to be involved in peacemaking. Mediation has for years been led by France, Russia and the United States.

“Even if many Western countries do not want to accept it, Turkey’s word is big, it’s fully independent,” he said.

The renewed fighting is the worst since a 1994 ceasefire ended a war over Nagorno-Karabakh that killed at least 30,000.

Azerbaijan said 41 Azeri civilians had been killed and 207 wounded in the fighting since Sept. 27. Azerbaijan has not disclosed information about military casualties.

Nagorno-Karabakh has said 429 of its servicemen and more than 20 civilians have been killed in the fighting.