POPULISM, THE NEXT GENERATION 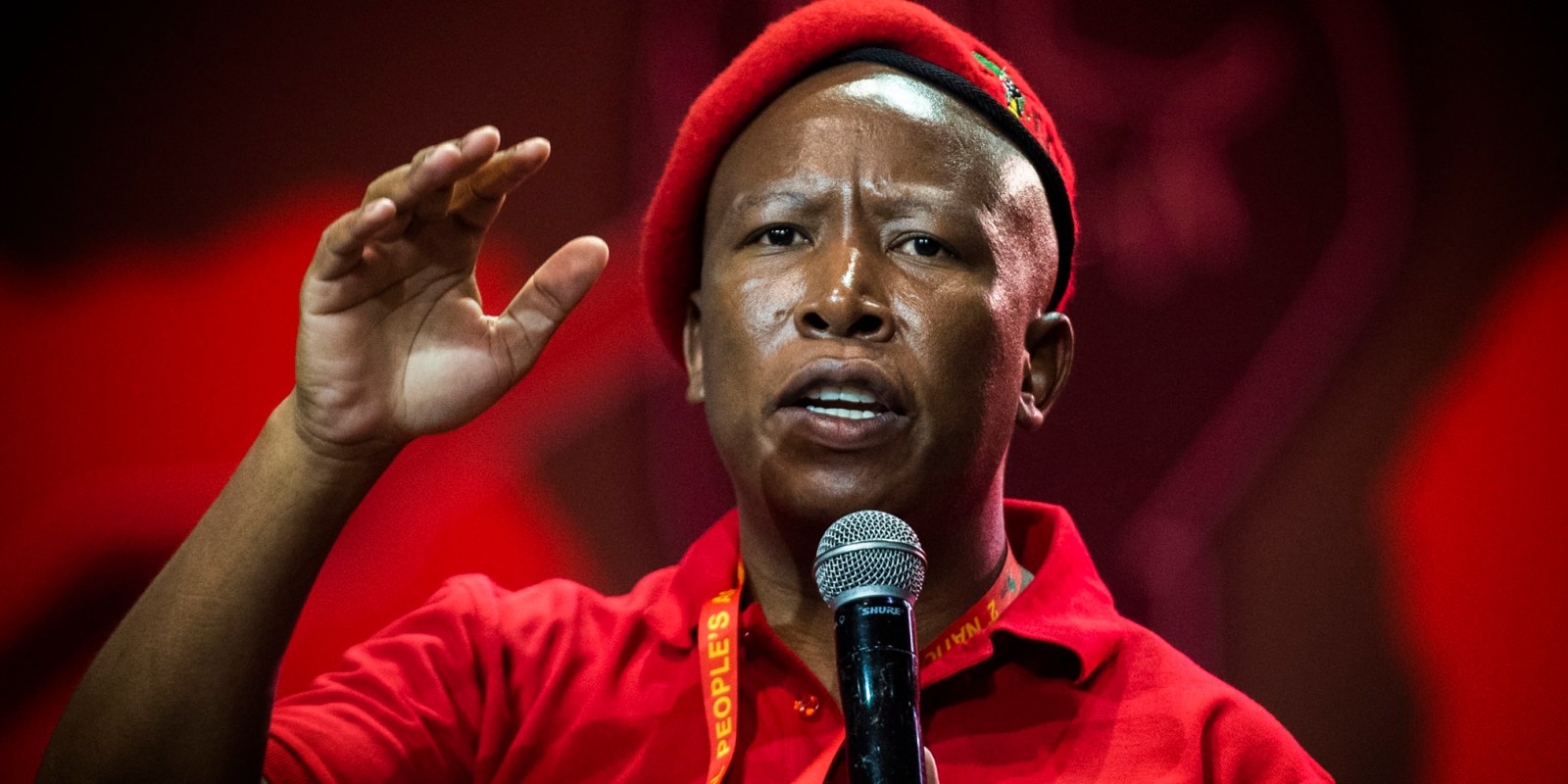 Amid simmering tension over a farm murder in Senekal, the DA has laid criminal charges against EFF leaders for tweets that could constitute incitement to violence. But as usual, when it comes to social media, there are few clean hands.

On 7 October, in response to footage of protesting farmers in Senekal, EFF leader Julius Malema tweeted: “Since the government of @CyrilRamaphosa is extremely scared to respond decisively, we are on our own. Next appearance, all ground forces and peace loving South Africans will be in attendance, in defence of our democracy and property. Magwala a chechele morago [Cowards move to the back]! Fighters attack!”

In response to Malema’s tweet, EFF MP Nazier Paulsen posted a picture of a machine gun with the words: “Get ready!”

Malema’s remarks were made in the context of video showing irate farmers seemingly storming the court’s holding cells in Senekal following the murder of 21-year-old farm manager Brendin Horner. In the course of the protests, a police van was destroyed and shots fired.

There were immediate complaints on social media that if black protesters had behaved in a similarly volatile fashion, police would have responded in a far more heavy-handed way. Malema’s tweet appeared to be a call to followers to attend the next court appearance of the men accused of Horner’s murder — ostensibly to defend “democracy and property”.

But his final two lines — “Cowards move to the back! Fighters attack!” — have led many to conclude that what Malema was really invoking was violence, which appears to be what Paulsen was responding to.

Fuelling the fire is the fact that a few days later, Malema posted a photograph of a machine gun. The context of this tweet was less clear, as the gun in question had a numbered tag affixed to it and Malema captioned the picture with a confused-looking emoji. Some have speculated that this post was unrelated to the Senekal commentary and may have been related to evidence in the case — now postponed to January 2021 — in which Malema is accused of illegally discharging a firearm at an EFF rally in 2018.

Now the DA has taken action against these “social media posts that incite violence”, in the words of a statement by DA chief whip Natasha Mazzone.

On Monday, the DA laid criminal charges at the Cape Town central police station against both Malema and Paulsen with regard to the tweets, which Mazzone says amount to a “reckless attempt by the EFF leadership to further violence” at an already precarious time.

Added Mazzone: “We have already seen numerous posts over the weekend of EFF followers posting pictures of guns and firing shots in videos in support of Malema’s utterances.”

The DA wants Malema and Paulsen to be prosecuted for incitement to violence, which Nelson Mandela University head of public law Professor Joanna Botha explained to Daily Maverick is both a common law crime and a statutory crime.

“There is no law in South Africa at present that explicitly criminalises hate speech. Instead, you have to fit the conduct into an existing crime: usually either crimen injuria or incitement,” Botha said. 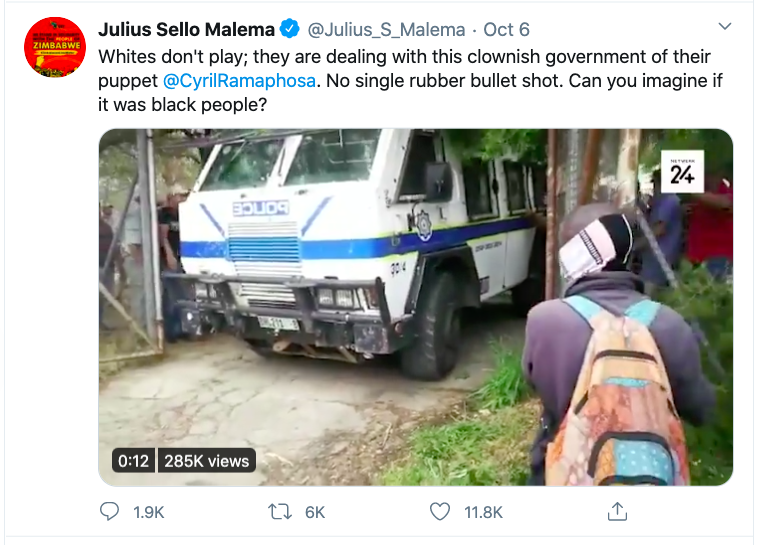 Incitement takes place when someone intentionally seeks to influence the mind of another to the commission of a crime — which does not have to actually take place.

Considering the tweets of Malema and Paulsen, Botha said:

“The EFF is very well aware of the requirements of incitement, and skirts very dangerously close to what is and isn’t criminal behaviour.”

The EFF has rejected the DA’s claim that its leaders are inciting violence, pointing to the first part of Malema’s tweet as evidence that his call was “to defend the Constitution, our judiciary and state property from those who think they are above the law”.

But Botha says that in Malema’s case, the problematic aspects of his tweets would be the lines:

“Cowards move to the back! Fighters attack!”

Botha said that incitement to violence can be quite difficult to prove, but that a court would likely have to look at the wider context of the tweets. Malema’s profile as a prominent person would also be taken into account.

“This is particularly dangerous [behaviour] for someone who is the leader of a political party,” Botha added.

To defend the EFF leaders, supporters on social media have produced another example of a tweet which they say contains similar hints of violence, and yet was never prosecuted.

In December 2018, AfriForum’s Ernst Roets posted to Twitter a video of himself firing a souped-up Glock with the caption: “Target practice.” 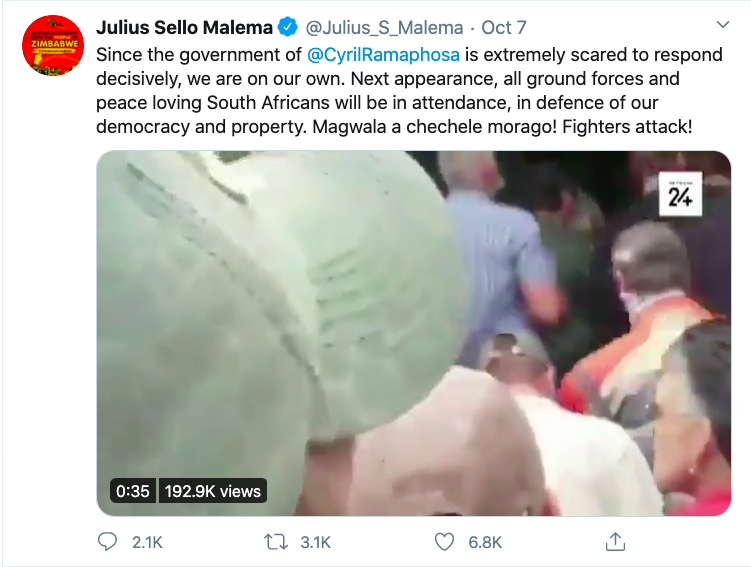 Roets’ tweet was posted shortly after Parliament had voted to amend the Constitution to allow land expropriation without compensation — meaning that Roets’ post can be viewed as a dog-whistle reference to impending violence as well.

In response to Roets’ tweet, DA leader John Steenhuisen — at that point the party’s chief whip — tweeted: “Nice one, Ernst!”

After receiving criticism at the time, Steenhuisen responded to detractors: “Sorry to disappoint you, but I am on record as fully supporting private firearm ownership in South Africa and encourage lawful gun owners to practise regularly at designated firing ranges.”

The DA is not relying solely on the police in holding EFF leaders to account for reckless tweeting. The party has also asked Parliament to investigate Malema and Paulsen for violating their oaths of office as MPs.

In the past, the party has complained about the apathy of the South African Human Rights Commission (SAHRC) in investigating social media utterances “glorifying farm murders”.

The SAHRC clarified in August that it would investigate a number of such posts, stating:

“The commission views the incitement or call for violence directed against persons on the basis of their race or any other prohibited basis as listed in the Constitution and the Promotion of Equality and Prevention of Unfair Discrimination Act, 2000 (PEPUDA), in an extremely serious light and is investigating the matter.” DM