Bafana blush on and off the pitch 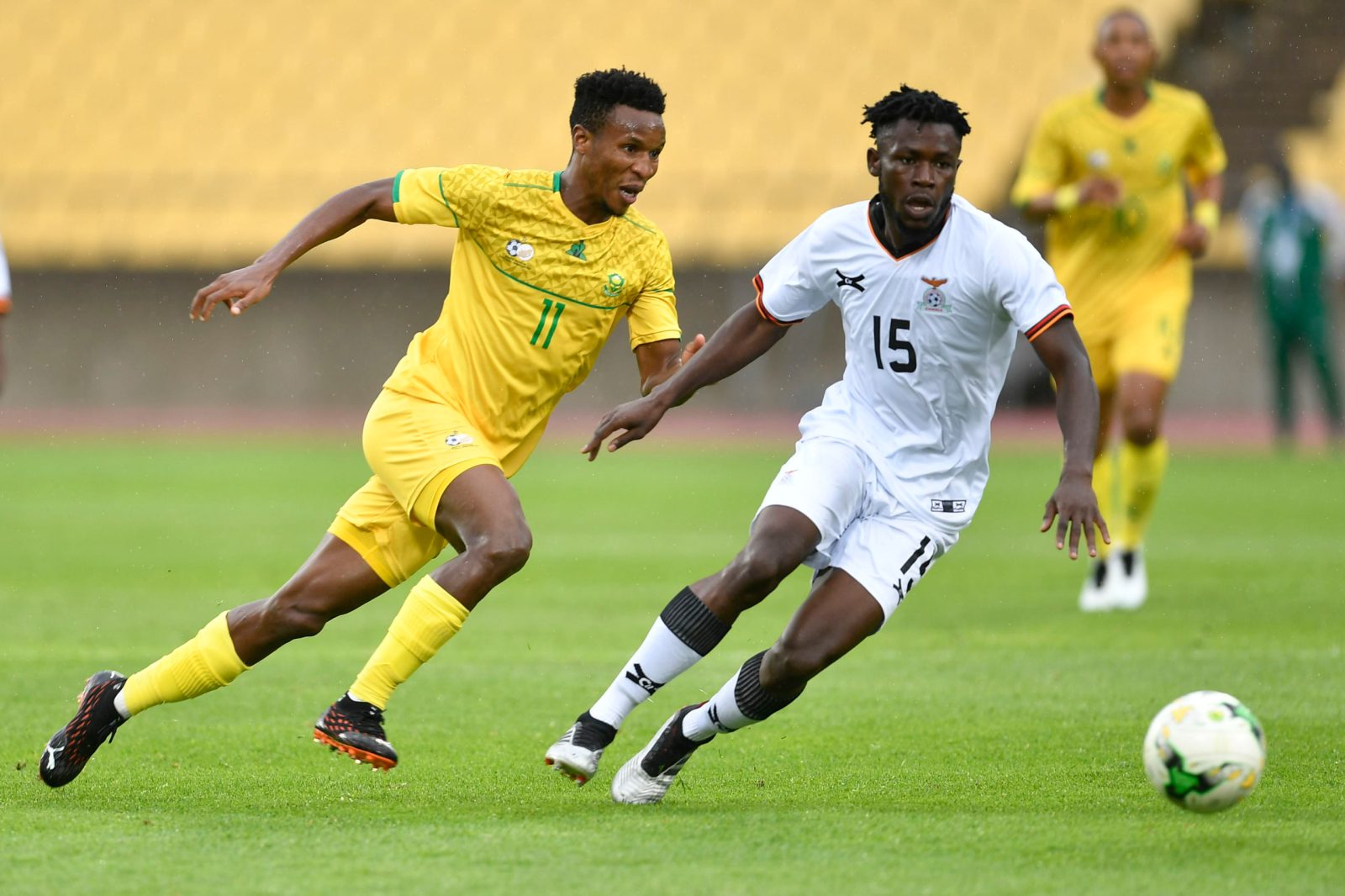 Themba Zwane of South Africa and Kelvin Kapumbu of Zambia battle for posession during the International friendly at Royal Bafokeng Stadium on 11 October 2020 in Rustenburg. (Photo: Lefty Shivambu/Gallo Images)

South Africa’s return to international football after almost a year of inaction due to Covid-19 was less than ideal as they failed to win either of their two games – drawing one and losing the other.

It was a farcical Sunday afternoon for Bafana Bafana both on and off the field. On the field, Molefi Ntseki’s men were beaten 2-1 by Zambia in their final friendly match for this Fifa international window.

Kelvin Kampamba and Chaniza Zulu dealt the blow in the last 12 minutes of the game, after Bafana had taken the lead in the 66th minute. This followed their one-all draw with neighbouring Namibia on Thursday.

“We have ourselves to blame. We struggled since the first whistle to play our normal game and I think that gave them the confidence to play their football; we just couldn’t get into the game,” said Keegan Dolly, the scorer of Bafana’s solitary goal in the loss.

Off the field of play, they were also left embarrassed as the technical team came out sporting Nike rain jackets — the national side’s recently replaced sponsor.

Last week the South African Football Association (Safa) announced that they were now in a partnership with French apparel company, Le Coq Sportif, as kit sponsor.

And whereas the players wore their Le Coq Sportif gear on the pitch, Ntseki and some of his support staff could be seen wearing Nike rain jackets as it poured down at the Royal Bafokeng stadium – with the Nike symbols covered up with black patches.

To say the mishap was a royal embarrassment would be an understatement, and Safa president Danny Jordaan conceded that fact after the game.

“That’s clearly an administration issue and must be resolved; you cannot at international level. And I think it’s a mindset that when it’s a friendly match and a training match, everything goes down. And we must step it up,” said Jordaan.

The president also stated that though the two games were a chance for the team to stretch its legs after an extended break from international football, they expected better results than the draw and loss.

Contrary to that, prior to the games, the Bafana coach had spoken about not being too perturbed by results in the two matches, stating that he would judge the success or failure on how the players executed instructions and combined.

“For me, I am not interested in the results,” Ntseki told the media. “I am more interested in our team; how they gel and how they understand each other.

The next assignment for Ntseki and his men is a doubleheader against islanders Sao Tome as part of the qualification for the Africa Cup of Nations (Afcon), which is scheduled for January 2022.

Ntseki does know, though, that similarly poor results against the side currently at the basement of Group C will all but spell the end of their qualification hopes. With their final matches against Ghana and a tricky Sudan side, only the collection of the maximum six points on offer against Sao Tome will do. At worst, they can only afford to draw one and win the other.

“We are trying very hard to get to the top of the log, where we are playing, in our Afcon qualifiers. And part of the questions will be, is the team ready, are the players ready going into the next Fifa week?” Ntseki said after the match.

“We have answered those questions, even though I’ve got too many questions (that need answering), and some of them can only be addressed when we report for camp for the next game.”

That next game is in a month, the first of the crucial fixtures against Sao Tome. It’ll take place on 13 November at the FNB Stadium, with the reverse fixture taking place three days later.

This past week was not all gloom and doom for Ntseki, however. Before the games, he had said he was trying to blood some new faces in order to create a larger database for the national team.

And under-23 sensation Luther Singh was one of the players who impressed. He started in the draw against Namibia, and was the goal scorer for Bafana on the day. Not only that, but he combined impressively with Mamelodi Sundowns striker Kermit Erasmus throughout the game.

In the loss against Zambia, Sundowns defender Motjeka Madisha was continuously the difference between the Zambians scoring or not. He displayed some outstanding last-ditch defending to deny Milutin Sredojević’s men, until he couldn’t anymore.

Ntseki will at least look to microscopic positives such as those when making the case that the games were not a complete waste. One thing is for sure though: performances have to improve if South Africa is to be one of the countries at Afcon Cameroon in 2022. DM