For the residents of Rietbron hard lockdown made life e...

For the residents of Rietbron hard lockdown made life even harder 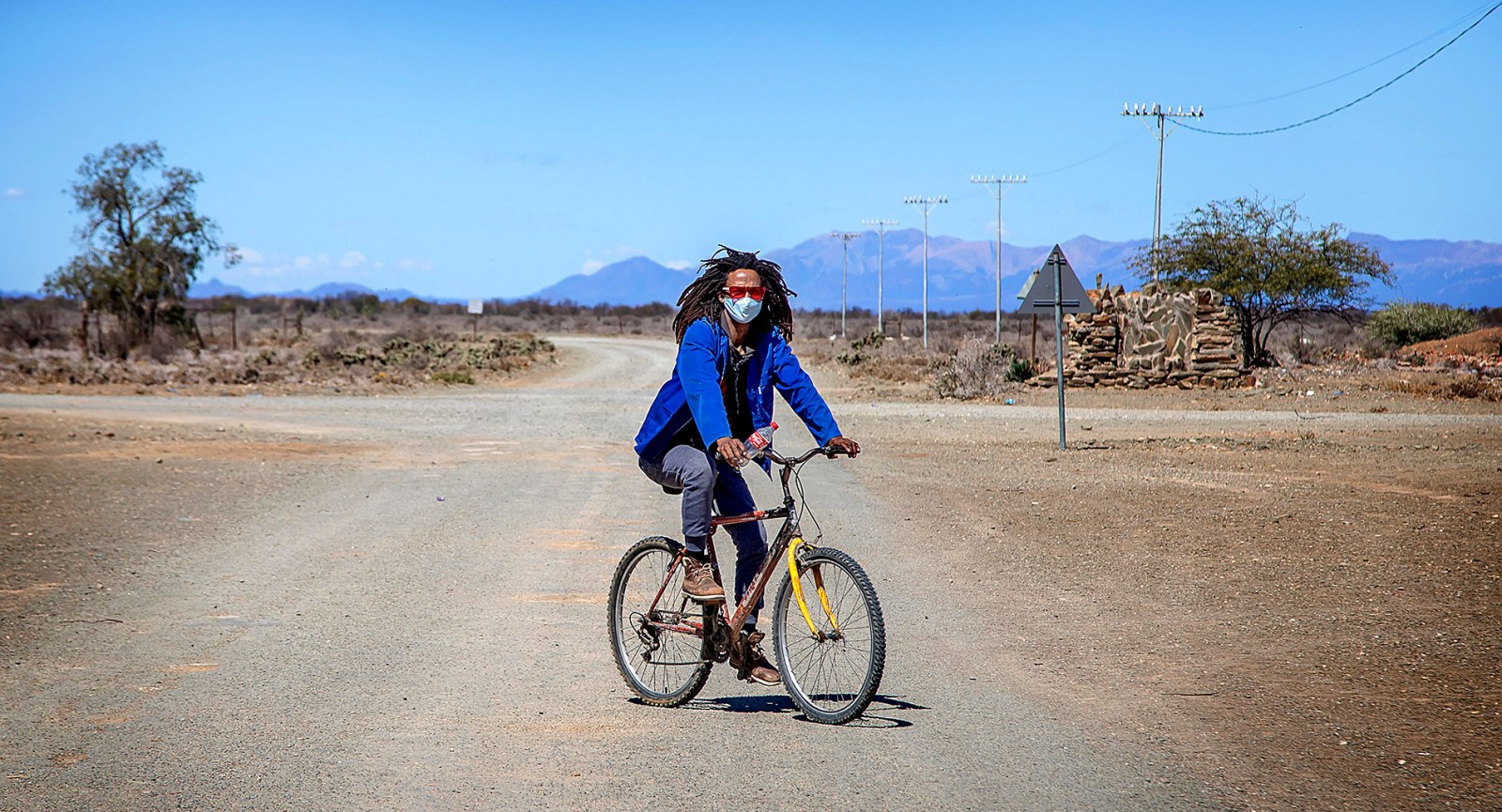 Ryno Wagenaar was sent from Oudtshoorn to live with his grandmother in Rietbron and has not been able to leave. (Photo: Donna van der Watt)

Just when the people of the Karoo hamlet of Rietbron thought life couldn’t get much harder, the lockdown was imposed, blocking their access to social grants.

For residents of the small drought-stricken Karoo town of Rietbron, the months of hard lockdown made their lives dramatically worse — they could not cross the provincial border to collect social grants and buy food in the nearest major town.

“Hope is not something we know,” says Cornelia Booysen, 59, as she comes to collect a food parcel for her family.  “We take life as it comes.” Until the lockdown rules were eased, she and her neighbours in the Eastern Cape hamlet could not get to Beaufort West in the Western Cape, where they normally collect their grants. Two dirt roads connect Rietbron, population 1,184, to the outside world. One is dotted with huge mountain tortoises, some dead, the other with springbok and sheep.

At noon in early summer, temperatures hover close to 40°C.  At least 100 adults, their children and some friends are waiting for food parcels. Mothers cover their children’s heads with blankets and clothing to protect them from the heat.

Wheelbarrows, donated by a farmer for an agriculture project, are used to carry their food parcels home. Some of the elderly call relatives to leave their jobs and come and push the wheelbarrows for them.

The Department of Social Development identified Rietbron in 2014 as one of two poverty-stricken wards in the Cacadu District that would be included in Project Mikondzo, a programme to try to alleviate such problems as malnutrition, violence against women and child-headed households.

But Rietbron residents say nothing has really changed in the past six years.

Corene Conradie from Gift of the Givers says that in Rietbron and towns like it the Covid lockdown had made hunger worse when residents who had gone to the cities had lost their jobs and returned home.

“For many families that is a double tragedy,” she says. “It means there are extra mouths to feed and nobody to send money home anymore. The families we are helping in Rietbron did not receive any assistance during lockdown.”

Gift of the Givers founder Imtiaz Sooliman says one plea dominated the organisation’s toll-free lines during the lockdown:  “Where can we get food, we are starving, we are hungry.”

“The reality stares you in the eye,” he says. “You can’t assist everyone, just as in any major disaster. But each person who is richly endowed, or even with moderate means, can do something. This is a time to give till it hurts.”

Rietbron resident Jeanine Sauls asks: “Where must people get money to leave?  If they leave they never come back again.”

Connie Schoeman, a social worker from the nearby town of Willowmore who helps out in Rietbron, says the need is great. “We identified 100 families who received no grants and no other assistance during lockdown for urgent food aid,” she says.

The government clinic provides about 25 children with food.

“One of our biggest problems is the number of teenagers who fall pregnant,” says Schoeman. “They do not have identity documents themselves so they are unable to register their babies’ birth. For them to get an identity document they must go to the home affairs in Graaff-Reinet and the officials require them to bring their moms with them.

“Often the moms are the only ones who work and they can’t give up a day’s work. The taxi fare is high. It will cost each of them R150 to go to Graaff-Reinet.”

Schoeman says a home affairs official came to Rietbron a few weeks ago but he said he was only there to help learners in Grade 12 apply for identity cards so they can write exams. “But he couldn’t connect to the internet so he left again,” she says.

“Often the grandmother would buy nappies for the children but by the middle of the month the clinic reports that there are many more cases of nappy rash.”

Schoeman says alcohol abuse is a major problem. “The community was given water tanks as there is no drinking water left in Rietbron. But they sold many of them for two papsakke [cheap wine that comes in a plastic bag] and some for R50. Some are working for the expanded public works programme.

“There are some projects here to get pig farming and other types of agriculture underway.”

Schoeman notes the struggle many grant recipients had when the provincial border was closed. “People pay R150 for a man to go to Beaufort West to draw their pensions and grants, but he couldn’t go because the borders were closed,” she says. “We are afraid that those grants might have been cancelled.”

She says the incidence of gender-based violence in Rietbron is very high for such a small town.

“We like to watch television,” local resident Jeanine Sarons says. “I also sometimes work. We have a programme where we are paid to pick up rubbish. But some days we watch Sewende Laan twice.

“Otherwise we live on our all pay [social grant]. People here will help each other. If we get a food parcel we share with those who did not.”

Charlene Miggels, 24, says she hopes the street-cleaning programme, an expanded public works project, will start again soon. “I tried to make a garden but we had a terrible drought here for the last five years. We struggle for water.” She says few people in Rietbron were aware of the R350 social relief of distress grant. “I don’t think anybody here got it. Nobody knew what to do.”

Booysen says she has done housework since she was a little girl. “But then I got ill so now I can’t work anymore. We send a man to go draw our pension in Beaufort West. He first draws R150 for himself. Then he brings the rest.”

Transport costs are high with taxis asking R180 to go to Beaufort West and R100 to go to Willowmore. Rietbron doesn’t have a bank or a South African Social Security Agency paypoint.

“We have a few small shops,” says Booysen. “They help us. We can buy on the book [credit] if we don’t have money. I haven’t received my grant because the man couldn’t go to Beaufort West but I hope he will go soon.”

Ryno Wagenaar, 30, is one of the few residents to have secured a job since the lockdown was partially lifted. “I got a job on a farm. I am happy,” he says.

Wagenaar was sent to Rietbron when he was a boy to stay with his grandmother. “I haven’t been able to leave.”

Johannes Jaftha, who drives the rubbish truck, stops to ask if there is food for his animals. He and a few other young men have started a small farm but the drought is making it hard. “I just need something,” he says. “We need some food for our animals too.”

A Gift of the Givers geohydrologist, “Oom” Gideon Groenewald, says Rietbron is an example of how climate change is impacting small towns and communities. “The town was originally founded because there was water. Now the water is drying up.  We are hitting that 220-year cycle where water becomes very scarce,” he says. DM168