Flying during Corona to launch the new Caravelle 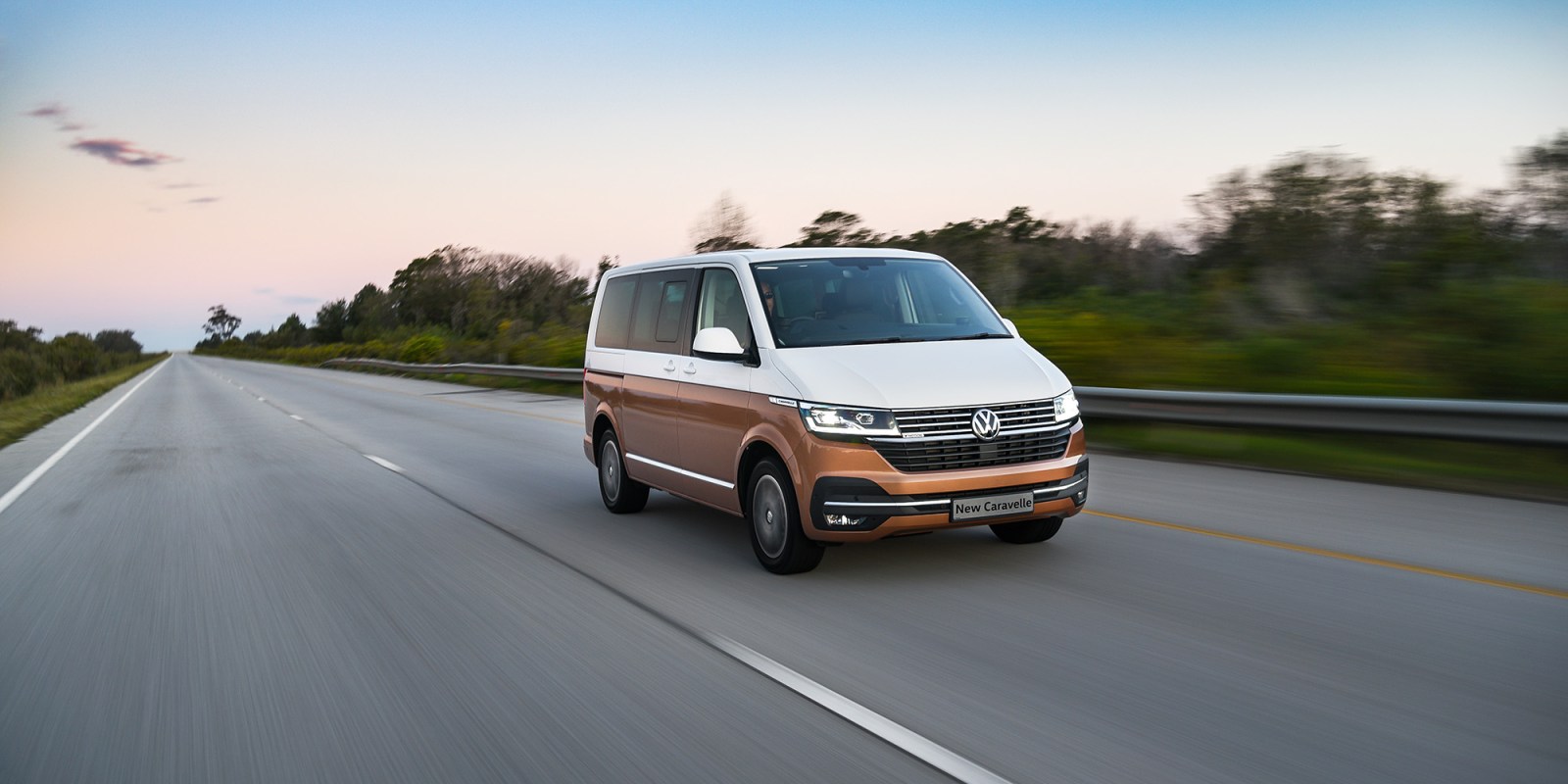 With airlines dropping out of the sky like flies, the new VW Caravelle T6.1 offers a seriously good alternative for long-distance travelling.

Local car manufacturers have been cautious in getting motoring media back on planes to attend launches the way we used to before Covid-19. Pre-lockdown I regularly found myself zipping through check-in, four times a week. So the bets were on who would be the first to break the eight-month out-of-town launch embargo. When Volkswagen, South Africa’s top-selling passenger car manufacturer, stepped out of the virus haze with an invite to launch the new VW Caravelle T6.1 in the Eastern Cape, I eagerly accepted.

Arriving at Cape Town International at 5.30am last week was a surreal experience. The once-bustling airport had a decidedly dystopian feel as I waited in a physically distanced queue to enter the airport building, masked and armed with my Covid health regulation form. At 35.3 degrees, my temperature allowed me to move through “sanitisation” on to “form verification”. Then I was herded to check-in. Compared to pre-Covid early morning check-in queues, which often snaked through the whole departure hall, last week a smattering of brave masked warriors moved silently through metal detectors.

The boarding gate screens were testimony to the state of the battered local aviation industry. No Kulula, no BA, no SAA.

Comair, house to Kulula and local British Airways, was placed in business rescue in May 2020 with more than R9-million of “unused reservations” owed to passengers. It was no surprise to see the absence of SAA on last week’s boarding schedule after administrators took control of the airline in December 2019, a result of almost a decade of financial losses.

South African Airways has become a highly emotive national issue with a rescue price tag of R10.4-billion At the time of writing this, debate on whether to extend a lifeline to the beleaguered airline continues to rage. While Public Enterprises Minister Pravin Gordhan is firing on all cylinders to resuscitate the money pit, Finance Minister Tito Mboweni is dead set against any further bailouts as funds are clearly needed elsewhere in an attempt to resuscitate the economy.

I was booked to Port Elizabeth on Airlink (formerly SAA Airlink) which strategically separated from SAA in early 2020 and is now flying a number of routes formerly operated by the national carrier. (Jeez, you’d be forgiven if you thought this article is on the state of the local aviation industry, rather than a motoring review.)

Now on to things more celebratory.

This year is the 70th birthday of the iconic Transporter which first went into production in 1950. Since then, more than 13 million variants have left the production line, garnering the accolade of “the longest constant production run of any commercial vehicle in history”.

The brainchild of Dutch importer Pon Bon, the first Transporter used the engine and gearbox from the VW Beetle and was launched as a panel van, a passenger van (otherwise known as a kombi) and an eight-seater bus. A year later, VW added the multi-window Samba to the range which became known as the “splittie” due to its distinctive two-piece windscreen design. By 1967, when it was time to introduce the T2, 1.9 million T1s had been sold and it had become an icon of the 60s flower power movement, often referred to as the “hippie bus”.

Between 1967 and 1979, the redesigned T2 sold another million units, dropping the split-screen for improved visibility, while a sliding door was introduced as standard. The third generation, between 1979 and 1992, saw the T3 garner a total redesign, becoming longer and more spacious while retaining the rear engine of its predecessors. It was during this Transporter era that the Caravelle and California gained popularity. By 1985, the Transporter was sold in 180 different markets and by 1986, six million Transporters had been sold. Between 1990 and 2003, the T4 revolutionised its predecessors with a front-engine, front-wheel drive and drivetrain layout. A choice of two-wheel bases was introduced, barn doors at the rear, and sliding doors on both sides. The Transporter range ballooned to include the Panel Van, the Kombi, the Double Cab, the Pickup, the Caravelle, the Multivan and the California.

Between 2003 and 2015, VW offered some serious innovation in the T5, developing the idea of the Transporter being compatible with both pleasure and work. Available in petrol and diesel, front-wheel and all-wheel drive, with more than 100 variants to choose from, the T5 became one of the most versatile vehicles in an increasingly competitive segment, selling more than 1.65 million units.

By 2015 it was time to launch the even snazzier T6, with a host of innovative driver assistance systems. Internationally, the updated T6.1 range was announced last year, but by early 2020, Corona had all but put the brakes on the global vehicle market. The extensive T6.1 range will now be available in SA from January 2021.

Last week I got to test drive the updated T6.1 Caravelle in the scenic Eastern Cape, underpinned by an impressive 2.0-litre BiTurbo diesel engine, offering 146kW of power and 450Nm of torque. At first glance, the exterior of the new Caravelle does not look that different from its predecessor, but on closer inspection, the revised radiator grille, with a new bumper and front and rear LEDs, give it a refreshed edge. Additionally, there’s a whole palette of new colours on offer, including a choice of seven new “retro” two-tone combos.

Inside is where the T6.1 has had significant upgrades. There’s a new 10.25-inch virtual display, with the cabin almost resembling an aeroplane cockpit. Dubbed the Discover Pro Media system, it’s intuitive, with a high- definition screen and graphics. Like most new vehicles these days, it’s compatible with Android Auto, Apple CarPlay and Bluetooth. I particularly liked the self-charging slot which juices up your phone without messy charging cables. Front Napa leather seats are heated, there is dual climate control and both passenger and driver have moveable armrests.

There is also a bunch of upgraded driver-assist systems including Hill Start and Descent Assist, Tyre Pressure Loss Indicator, Lane Assist, Cruise Control, Park Assist and Automatic Post-Collision Braking – which thankfully kicked into gear when a large baboon unexpectedly jumped in front of our vehicle.

For those who are intending to tow extra cargo, the all-new Trailer Assist, in tandem with the reverse camera, helps to reverse in a straight line over relatively long distances. (Trailer-reversing can often be confusing because one has to turn the steering left for the trailer to go right and vice versa.)

Our journey entailed long stretches of tar road as well as some lengthy tracts on gravel. With the support of 4MOTION, which delivers power to all four wheels, this large “bus” was surefooted on both surfaces and able to impressively navigate the curves and bends of the many mountain passes along our route.

Supported by VW’s 7-speed DSG gearbox, the drive was smooth with almost no road or wind noise. On gravel, the Caravelle behaved beautifully until we hit some badly corrugated rutted dirt road in Addo. In fairness, I’m convinced most vehicles trying to traverse that stretch would have rattled like demented banshees. Deflating tyre pressure would definitely have facilitated a smoother ride.

I particularly liked the feel of the all-new electromechanical power steering which has replaced the hydraulic system found in previous generations of Transporters. It enables more agile and direct steering, giving the driver more control which also helps to reduce fuel consumption.

After two days of driving, I walked away impressed. The Caravelle ticks a lot of boxes – from being an elegant shuttle that can be turned into a boardroom on the go, to a large taxi, a sports bus or a spacious family vehicle. If any more airline companies go down, we may all be travelling by way of Caravelles in future. DM