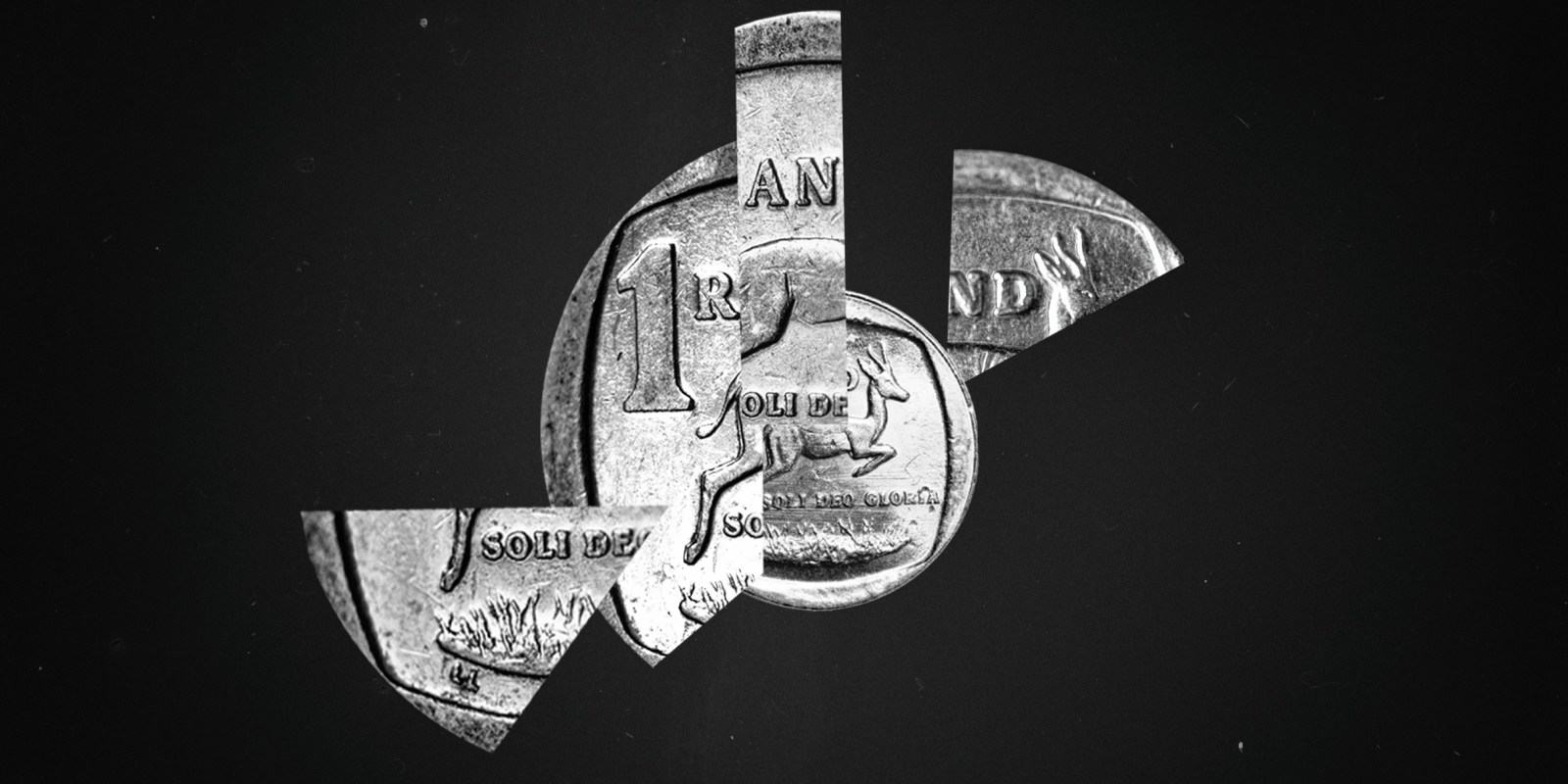 The details remain vague, but a draft of the cabinet-approved economic recovery plan obtained by Business Maverick focuses on structural reforms including the unbundling of state-run power utility Eskom. Much of the “wish list” includes goals that the ANC-led government has long aspired to but never achieved.

President Cyril Ramaphosa is expected to unveil the final draft plan on Thursday 15 October. The draft, dated 7 October, is entitled the “South African Economic Reconstruction and Recovery Plan” – a new acronym (ERRP) following a trail blazed by GEAR and RDP and the like. The “recovery” part clearly refers to the aftermath of the economic wreckage wrought by the Covid-19 pandemic. But it is also about recovering from the ruins of years of ANC policy folly, shoddy governance and State Capture.

“Non-implementation of the economic reconstruction and recovery plan could lead to loss of economic capacity, including collapse of the supply capacity, consumer and business confidence, the labour market and increased vulnerability of the poor. The overall plan aims to mitigate these risks,” the document says. 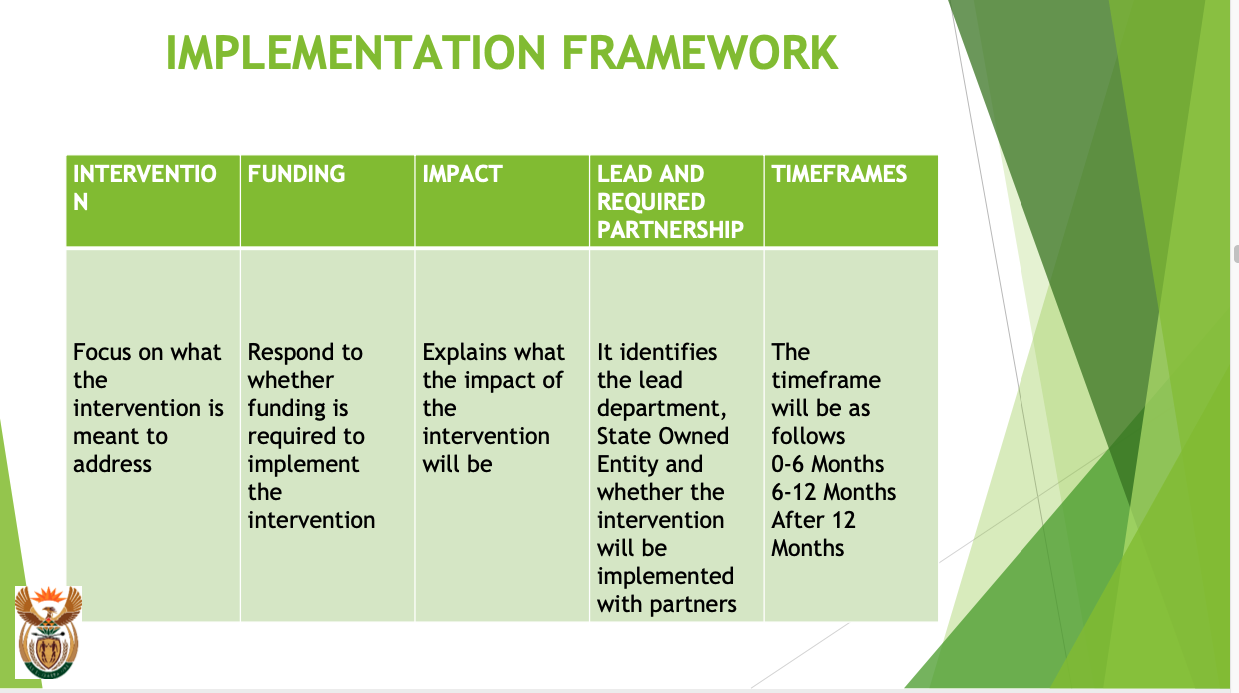 Economic capacity has already been lost, consumer and business confidence have already been shredded, unemployment is rife, and the poor are more vulnerable than ever. This is largely because of non-implementation of previous plans, among other things. Reversing these trends now is what is critical, and a “final action plan” is still being finalised, according to the document. The purpose of the plan is to “provide for economic interventions that lift the country’s overall economic performance by delivering South Africa to the generation of inclusive growth.”

“Inclusive growth” is one of those fuzzy buzzwords that mean delivering the benefits of growth to the poor and marginalised. But South Africa’s economy will probably not grow back to its 2019 levels until the end of 2022, so there is no real growth on the immediate horizon, let alone the “inclusive” kind. 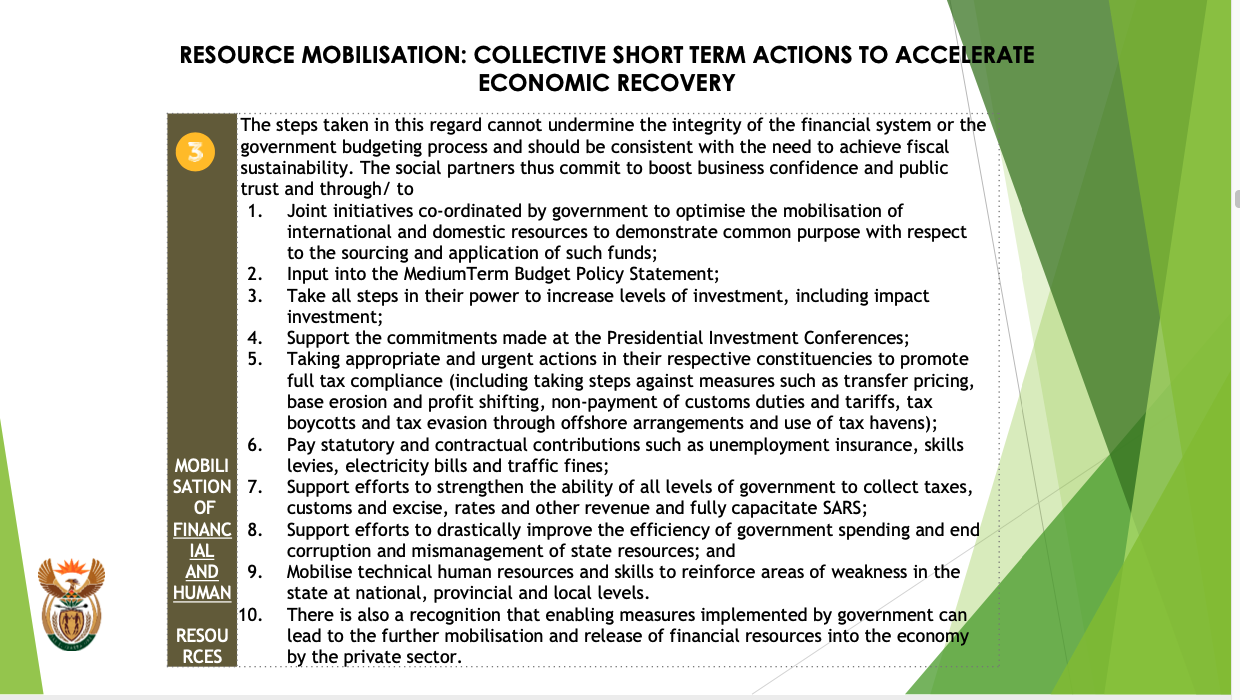 The plan also aims to: “Break the cycle of low economic performance, weakness in production and poor labour market outcomes by using infrastructure, localisation, re-industrialisation as levers to stimulate economic activity and to raise the standard of living in marginalised communities.”

“Re-industrialisation” has been a feature of ANC policy thinking for years and has long been a dream of the command-style economists at the Department of Trade and Industry. Industrialisation sadly requires a reliable power supply, so until that comes right, it is simply not going to happen. On that front, the plan broadly hits the right notes. 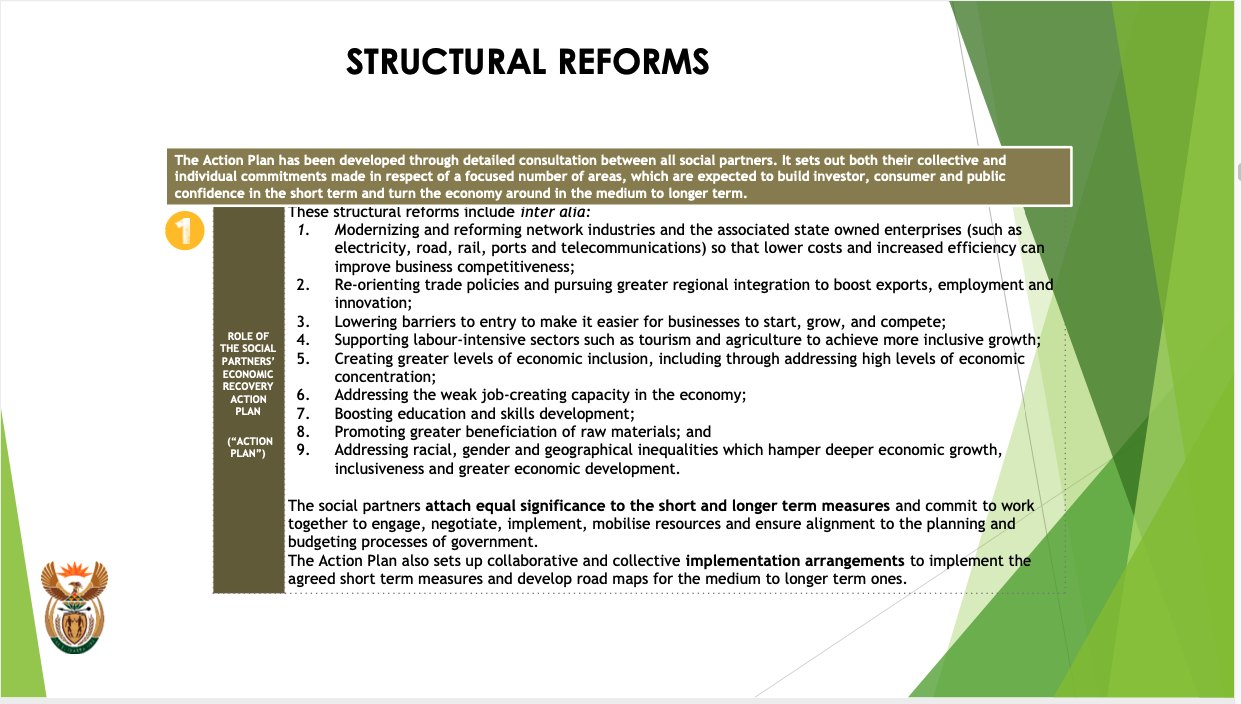 Under the heading “Ensuring energy security”, Phase 1 speaks of “enabling generation for own use,” while Phase 2 is focused on the “Separation and unbundling of Eskom and (the) implementation of the IRP to ensure diversification of resources”. So in the face of stiff union resistance, the government remains committed to the unbundling of the Goliath that is Eskom. This will see Eskom split into three nimbler units – power transmission, generation and distribution – that should provide opportunities for the private sector to supply the grid. 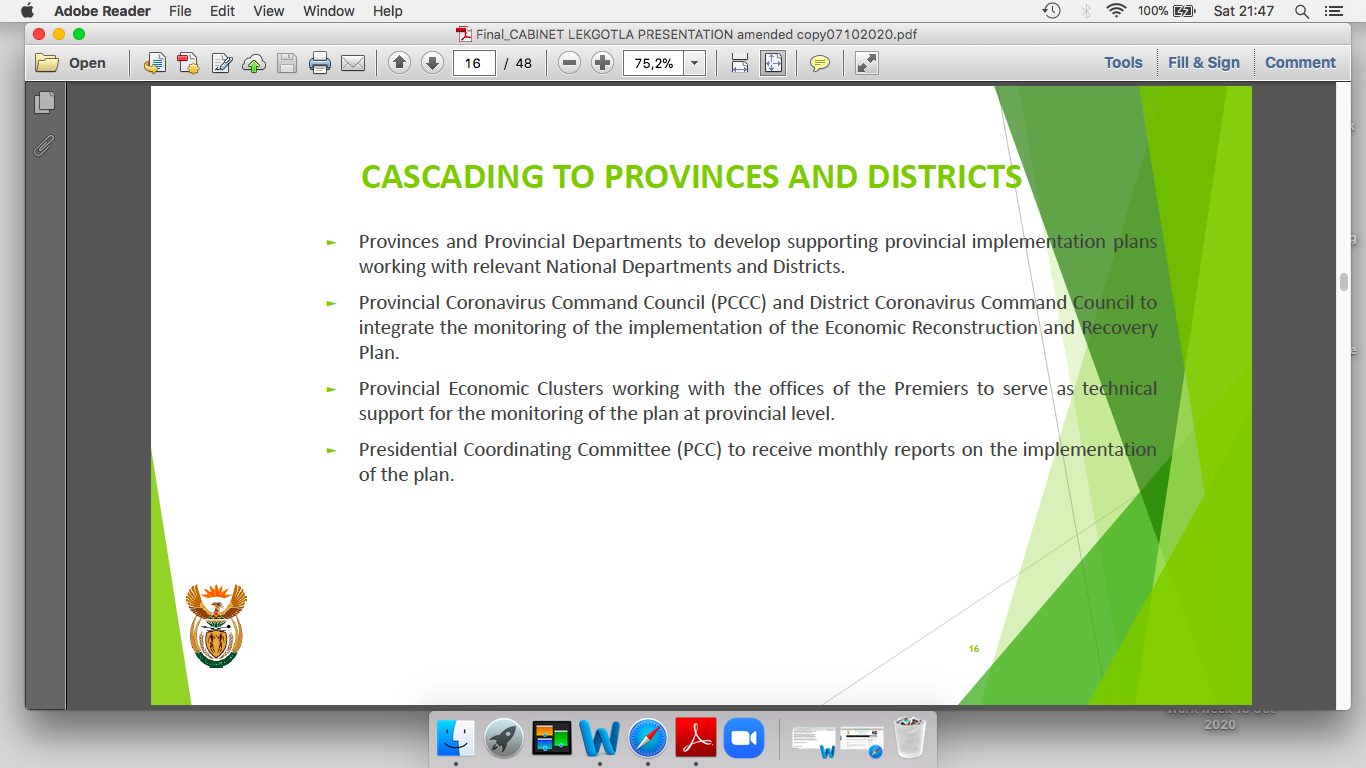 Then there are also grandiose dreams, to which the plan gives some credence. “Phase 3” refers to “Gas-to-liquids” but also preparations for the “Nuclear Build Programme” which the Treasury can ill afford at the moment. A “Mass Public Employment Programme” focused on infrastructure is also in the offing, which in many cases would mean paying lots of people low wages for doing unskilled grunt work filling in pot-holes and that kind of thing. This is hardly a new concept and it remains unclear where the money is coming from with debt levels set to soar.

The plan does differ in one crucial respect from its predecessors: it has a big “implementation” section, which includes a column on the financing required, the implementation time period, and the institutions responsible. The new focus on implementation is clearly a reaction to concerns about poor government implementation in the past, and perhaps also an oversupply of plans and an undersupply of deeds. 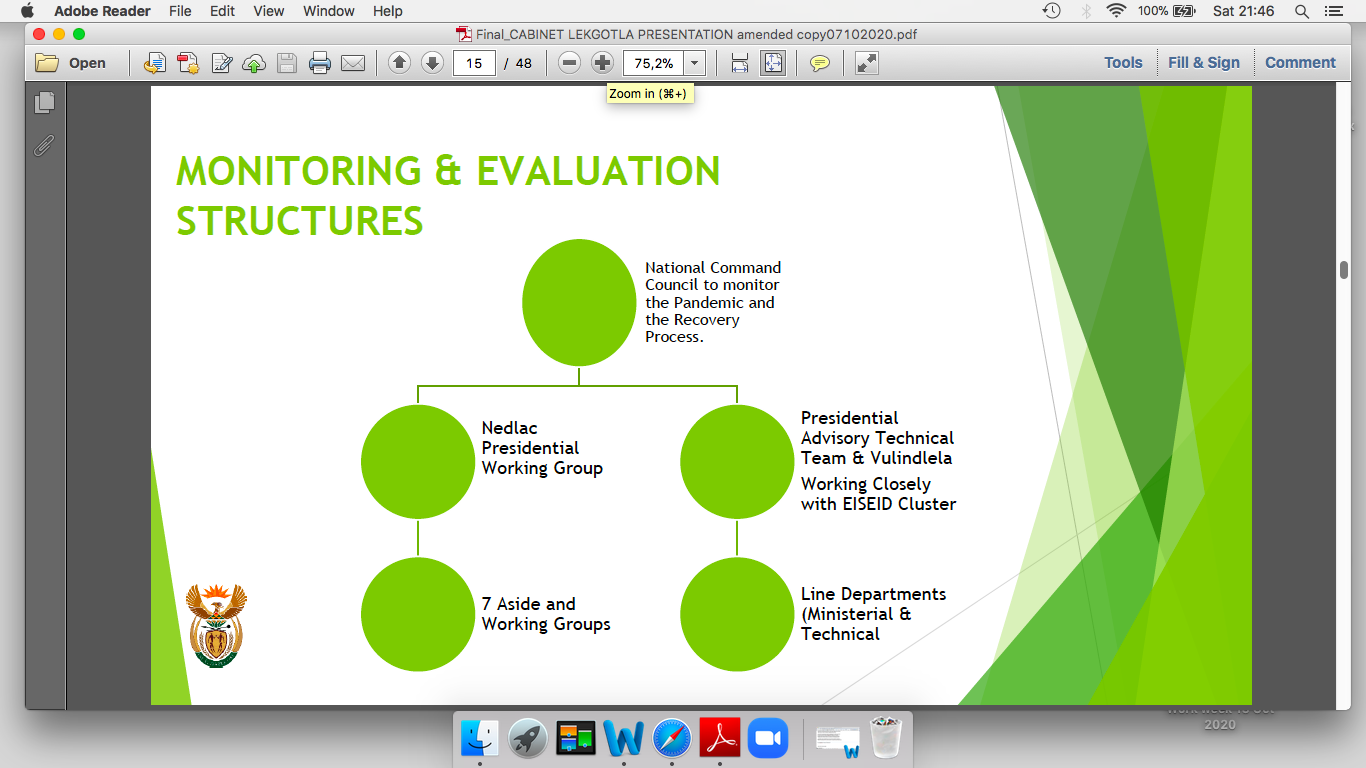 Nothing illustrates this better than the release of additional digital spectrum, which once again is included in the document after dragging on for more than a decade and being the responsibility of an astounding 11 different ministers.

“We see markets deeply sceptical of this plan …” Intellidex economist Peter Attard Montalto said about the draft in a note to clients.

“All the correct ideas are on the table” but the government is distracted and the draft looks like “a hodgepodge of ideas with no central agenda. Implementation credibility is all that matters.”

The plan does not seem on the surface to offer very much to the Radical Economic Transformation faction of the ANC, although there is a nod at regionalisation, and black economic empowerment does as usual get featured.

However, neither does the plan give business much to work with either, outside of infrastructure development and the restructuring of state-owned enterprises, only mentioning “confidence-boosting measures” in passing.

On tax, there is mention of expanding the Tax Employment Incentive, as well as a “review of VAT progressivity focusing on food security and vulnerable households” and tax relief for people and businesses in trouble. Likewise, the green economy does get a not, but mainly concerning waste recycling rather than the larger issue of power generation.

Overall, the plan reflects a State which is called on to do a lot in a situation of crisis but which, in truth, doesn’t have the capacity to implement much at all. Trying to solve that contradiction will be the core issue facing President Ramaphosa when he addresses parliament on Thursday 15 October.

The draft is available here. BM/DM