Slim likelihood of Boks playing in the Rugby Championship 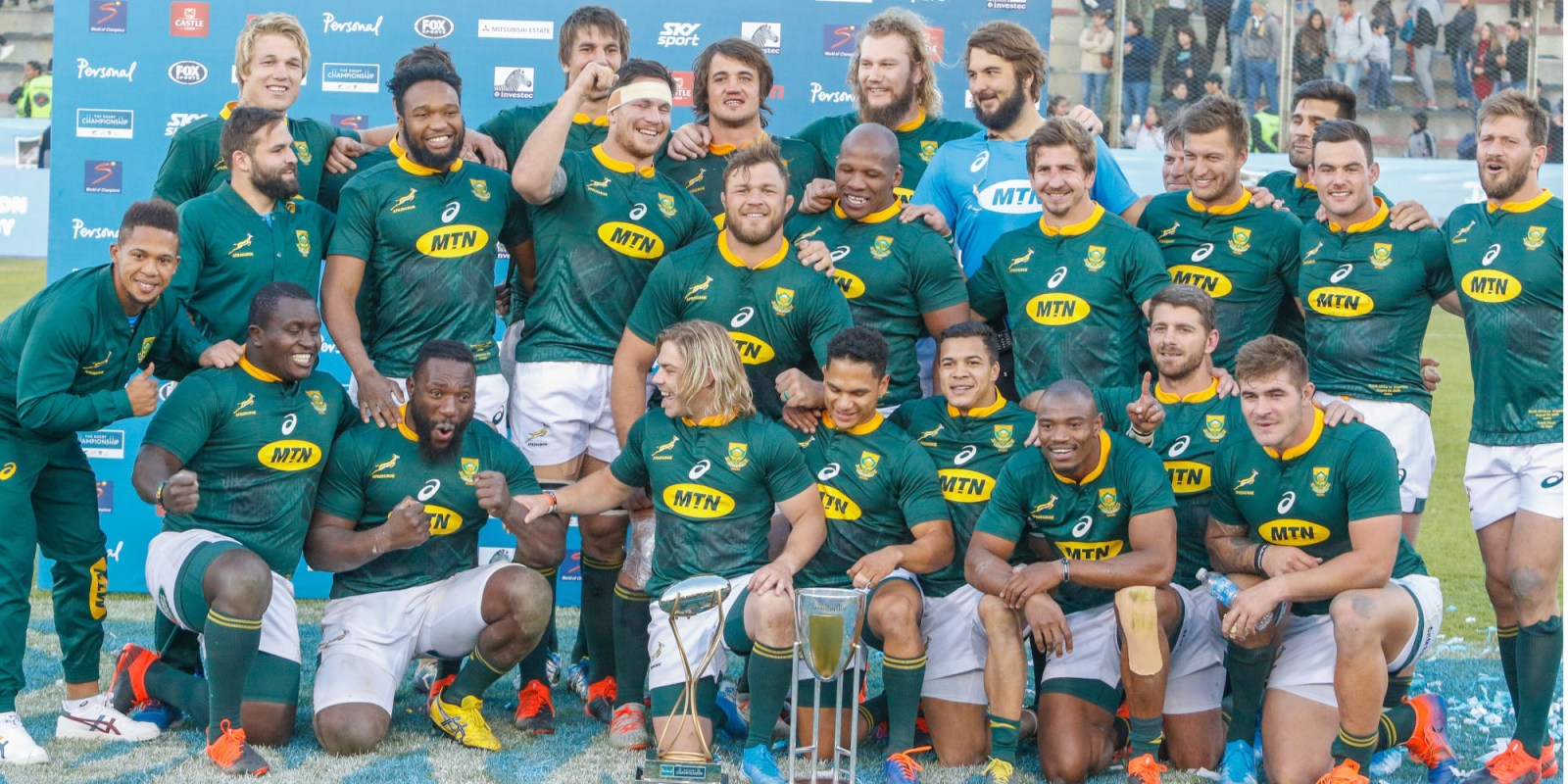 South African Springboks players celebrate their victory over the Pumas of Argentina after the Rugby Championship 2019 match between Argentina and South Africa at the Ernesto Martearena stadium, in Salta, Argentina, 10 August 2019. EPA-EFE/Jan Touzeau

Buried in the 683 words of a statement issued by South Africa, New Zealand, Australia and Argentina Rugby (Sanzaar) on Thursday announcing the 12-match 2020 Rugby Championship schedule was one line that probably said most about the situation.

“South Africa’s participation remains to be confirmed as the decision is dependent on several factors outside the control of Sanzaar.”

It’s becoming increasingly clear that the 2019 Rugby Championship and World Cup winners have almost run out of time to fly to Australia for the competition.

The government only gazetted new Level 1 travel regulations on 7 October. The Boks are now allowed to travel to countries with a moderate Covid-19 threat. Australia is low risk.

But the Boks face the problem of pulling together a squad in time to have any meaningful preparation, especially under quarantine conditions.

“Besides the current regulation, other factors we have to deal with would be around the isolation period that we have to go into when we get to Australia,” Bok coach Jacques Nienaber said recently.

“We have been on calls weekly. The isolation period is not going to be as strict as in New Zealand, but the details around it, like what recovery facilities and what modalities we can use, haven’t been spelled out yet. We are waiting for Australia’s government to give us guidelines in terms of what we can do when we actually get there.

“The last thing is about the availability of our overseas-based players. Currently, World Rugby’s Regulation 9 allows us to call up players in the window. But there has been a big pushback from the English clubs. That would be problematic for us as we would get those players a bit later. That has a massive influence on the isolation period.”

The Test window, which is regulated by umbrella body World Rugby, sets aside certain weeks for international matches to be played. But it doesn’t allow for enough Covid-19 quarantine protocols, which could add up to four weeks to the schedule on their side of competition.

Under World Rugby’s adjusted plan, in the northern hemisphere, the Six Nations will be completed between 24 and 31 October. There will be one rest week followed by four Test weekends, finishing on 6 December.

In the southern hemisphere a condensed version of the Rugby Championship has been scheduled for 7 November to 12 December.

But that’s only for Test weeks. For Springbok players who are based in the northern hemisphere, they would need to be released earlier because of the health and safety guidelines around Covid-19. It would require an extra two weeks away at least for Bok players who need 14 days quarantine in Australia. This scenario is not covered in the temporary regulations.

For a Test to be played on 7 November (the Test week is therefore 1-7 November), the Boks would need to start their quarantine on 17 October.

National director of rugby Rassie Erasmus said there had been progress in negotiations with French clubs, but English clubs could still be problematic if the Boks were to play.

“The English clubs will be in their semifinals and final and we haven’t got a clear answer over when their players will be available,” Erasmus said. “The French clubs are aligned with us.

“You have to arrive in Australia at the same time and it will be a massive squad because you have to be there for eight weeks.

“Quarantine alone is two weeks. You would have to take four looseheads, tightheads and hookers. If you have an injury in any of those key positions, the player who comes in [as a replacement] has to go into quarantine for two weeks. So, you simply have to take a massive squad.

“That makes it problematic – not that we can’t overcome it – if the overseas-based players only arrive two weeks after us because of the Premiership final. Then when we start playing Argentina in the first two weeks, they will still be in quarantine and will be without high-performance support such as doctors or physios. They will physically stay on their own.”

Player welfare and reputational damage are also factors SA Rugby is wrestling with while balancing that against appeasing sponsors if they choose not to go, as well as the loss of broadcast revenue.

Fortunately, on the last point, there was a new Covid-19-related collective agreement. SA Rugby will still earn a fee, even if the Rugby Championship goes ahead without the Boks.

When the planning was being done for new dates for the tournament, none of the Sanzaar members knew with certainty where they would be on the Covid-19 timeline. So it was decided that they would all share in the broadcast income even if one member could not participate.

The players’ mental welfare is also a massive consideration because the tour to Australia will mean eight weeks away, the first two of which will be in a hard-lockdown quarantine environment. That would be on top of South Africa’s restrictive lockdown over the past six months, which has already exacted a heavy mental and physical toll on players.

“Because South Africa was in a really hard lockdown, we have to get five to six games into the players before it is safe for them from an injury perspective,” Erasmus said.

“These players will be away from home for so long, and living in a bubble. And then when they return from Australia, they will have to quarantine again,” he added.

“The players who have close to 400 or 500 minutes of game time – which we need to be competitive and safe – are those that are based overseas. But even the players with the most minutes will have a little over 400 when we leave. Internally we are working out how we get the boys to the right level.” DM168