Peak of the Week 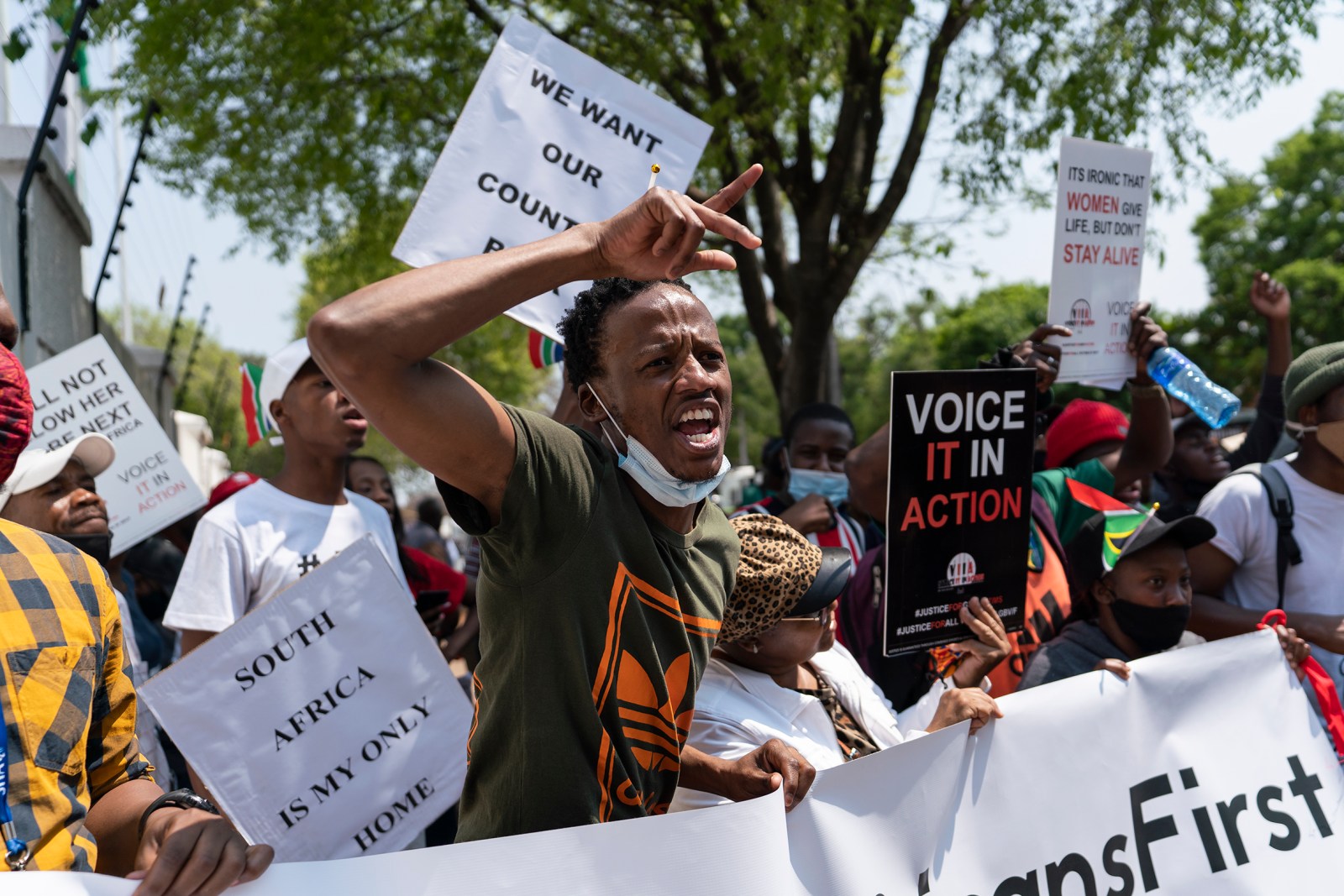 The group of protestors outside the Nigerian Embassy at recent march. Photo / Shiraaz Mohamed

This is a summary of the trending, highest impact, and most active themes and their narratives related to social cohesion and division in South African public-domain social media conversations between 1 October and 8 October 2020

As xenophobic sentiment and incitement to violence escalates significantly on social media, some accounts are being used to play a duplicitous game.

This is allowing protagonists in the #PutSouthAfricansFirst movement to preach peace in public but promote violence privately.

In the past three weeks, the #PutSouthAfricansFirst movement has been widely criticised in the media for fuelling xenophobic rhetoric, despite denials from some activists in the movement who claim they are being patriotic.

First, media reports detailed how a network of about 80 social media accounts were manipulating conversations to spread xenophobic sentiments. A Twitter account named uLerato Pillay was central to the network.

Then it was revealed that the person posing as uLerato Pillay was actually Sifiso Gwala, a former member of the SANDF who had been dismissed after serving in the DRC.

This past Sunday @PutSACitizens1 (a Twitter account claiming to be a “civil rights organisation for patriotic South Africans”) released this open letter to all media houses, criticising media coverage of the #PutSouthAfricansFirst movement.

The letter stated: “#PutSouthAfricansFirst is not a hostile movement, we are peaceful and none violent, we are a civil organisation based on the principles of patriotism our aim is to defend our country…” This post received nearly 200 retweets and 264 likes.

But statements made by central members of the #PutSouthAfricansFirst movement have often bordered on the verge of hate speech or stopped just short of inciting violence. Language linked to violence or hate speech towards foreign nationals was mentioned at least 6,400 times in South African social media conversations over the past three weeks.

Recently, the talk has become more aggressive and threatening. After @DIRCO_ZA shared a message of African unity by the Minister of International Relations and Cooperation, Naledi Pandor, @Motheo2009 responded with this comment: “Minister Pandor, Nigerians are involved in criminal activities in SA, they sell drugs, counterfeit goods, kidnappings and human trafficking. When are you deporting them using our law, before we take the law into our hands. #NigeriansMustGo #VoetsekNigerians #PutSouthAfricansFirst.”

@D007Lady (whose Twitter name is Adolf Hitler) tweeted: “Nigerians must (expletive) go home” in response to a video of a woman having an altercation with a man who had followed her home – with no indication whatsoever that the man was Nigerian.

Later, @MarioKhumalo put out this post: “…Let’s clean our country in order for us to have a way forward without anyone from outside sharing our space. #PutSouthAfricansFirst”. This tweet generated nearly 100 retweets and 221 likes.

As the aggression of tweets increased, the #PutSouthAfricansFirst movement began using the term “cleanse” extensively. The #23septembercleansa march was poorly attended but another has been scheduled using the #16octobercleansa hashtag. This hashtag has been used in 6,300 tweets from late September.

@MarioKhumalo also shared a post that referred to foreign nationals as “peasants”, among other names. The tweet read, “Our country is being turned into a drug lab, a haven for human trafficking, murderers, foreign criminals and foreign peasants. Yet, we have a parliament. What a joke! We need LAW & ORDER! #PutSouthAfricaFirst.” This was retweeted 65 times and liked over 100 times. 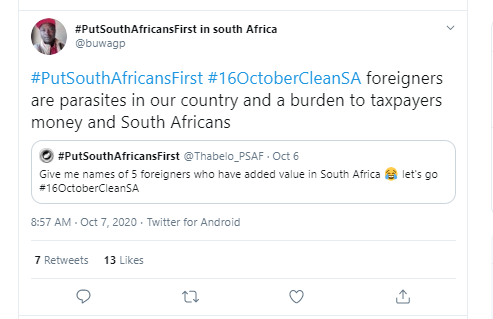 Another vocal #PutSouthAfricansFirst supporter, @buwapg, shared a tweet  referring to foreigners as “parasites in our country and a burden to taxpayers money and South Africans”.

Almost all of the central accounts in this network are careful not to make direct links between the movement and obvious hate speech or incitement to violence.

But, as the heat was turned up, devious tactics came into play.

This post, which did not trend, claimed: “Human trafficking runs in the blood of Nigerians.” The user did not include hashtags or directly link the PSAF movement on this tweet. However, this account (@Motheo2009) is highly active in promoting the movement. It has used the #putsouthafricansfirst hashtag and its various permutations in 1,621 tweets. This account has also been steadily publishing content related to the hashtag since the first day #putsouthafricansfirst was used.

Many social media users are now spreading dangerous xenophobic rhetoric based on unfounded claims. Accompanied by a photo of an unidentified woman’s injured limbs, @kemodidi’s tweet reads: “Human trafficking is real, Nigerians are traumatizing us. Clean Sunnyside, hillbrow and restore borders.”  This post received a great deal of attention, with 4,700 likes and nearly 3,000 retweets.

Incitement to violence by another user affiliated to the movement is also clear in this comment, responding to a post by Julius Malema. @SANEEDSAWALL tweeted: “we will attack those foreigners and the companies employing them”, before making a call to “Atrack [sic] South Africans Attack”. The user did not directly link the #putsouthafricansfirst movement to this comment. But a closer look confirms the affiliation with the movement: until this week, 105 tweets containing the hashtag had been posted by this account.

Other accounts involved with the movement are explicitly calling for the extermination of foreigners.  This tweet by @BrooXola reads: “The only way to get rid of these Nigerians is to assassinate them silently. We about to do drive-by shootings at their favorite spots.Pretrol[sic] bomb etc.They must be eliminated.” This tweet, which did not trend, is clear incitement to violence. Another post by the same user praises Lerato Pillay and states: “Nigerians must be shot.”

The language used by these accounts – who are known supporters of the #putsouthafricansfirst movement and its agenda – is inconsistent with the movement’s media release that describes itself as non-hostile, non-violent and peaceful. 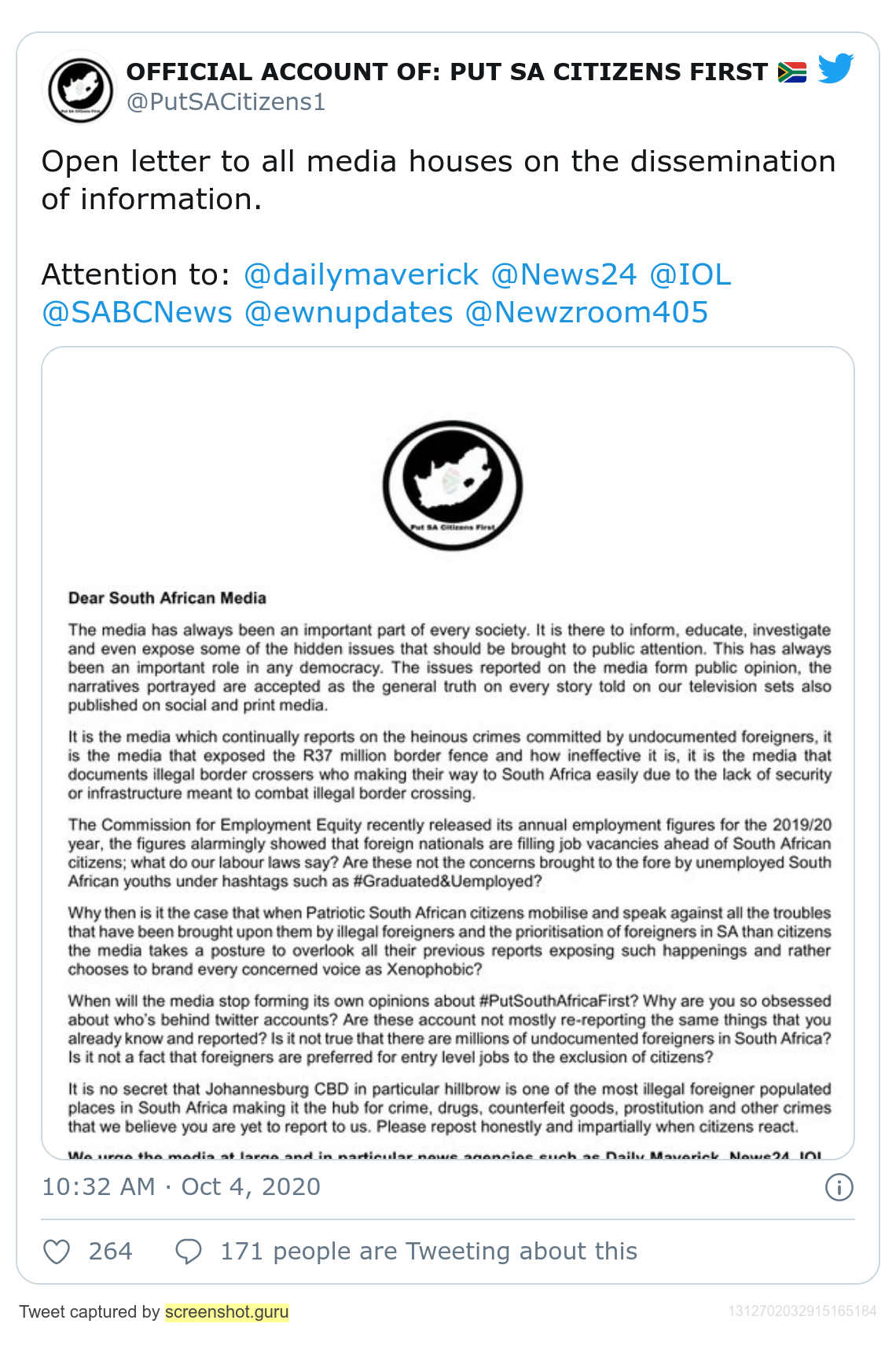 While the movement’s official communications publicly decry confrontation, its members are provoking it.

This double-talking tactic has allowed the movement to promote overtly xenophobic and hateful sentiment, while avoiding prosecution for promoting hate speech or inciting violence.

This is resulting in a growing volume of increasingly hateful and violent content being posted on social media as the narrative spreads into mainstream South African culture.

Legal experts have confirmed that many of the xenophobic tweets being publicly distributed on social media clearly amount to hate speech and incitement to violence, which are both criminal offences.

Whether South Africa’s law enforcement agencies, or the #putsouthafricansfirst movement itself, take action against the perpetrators of these crimes remains to be seen. DM