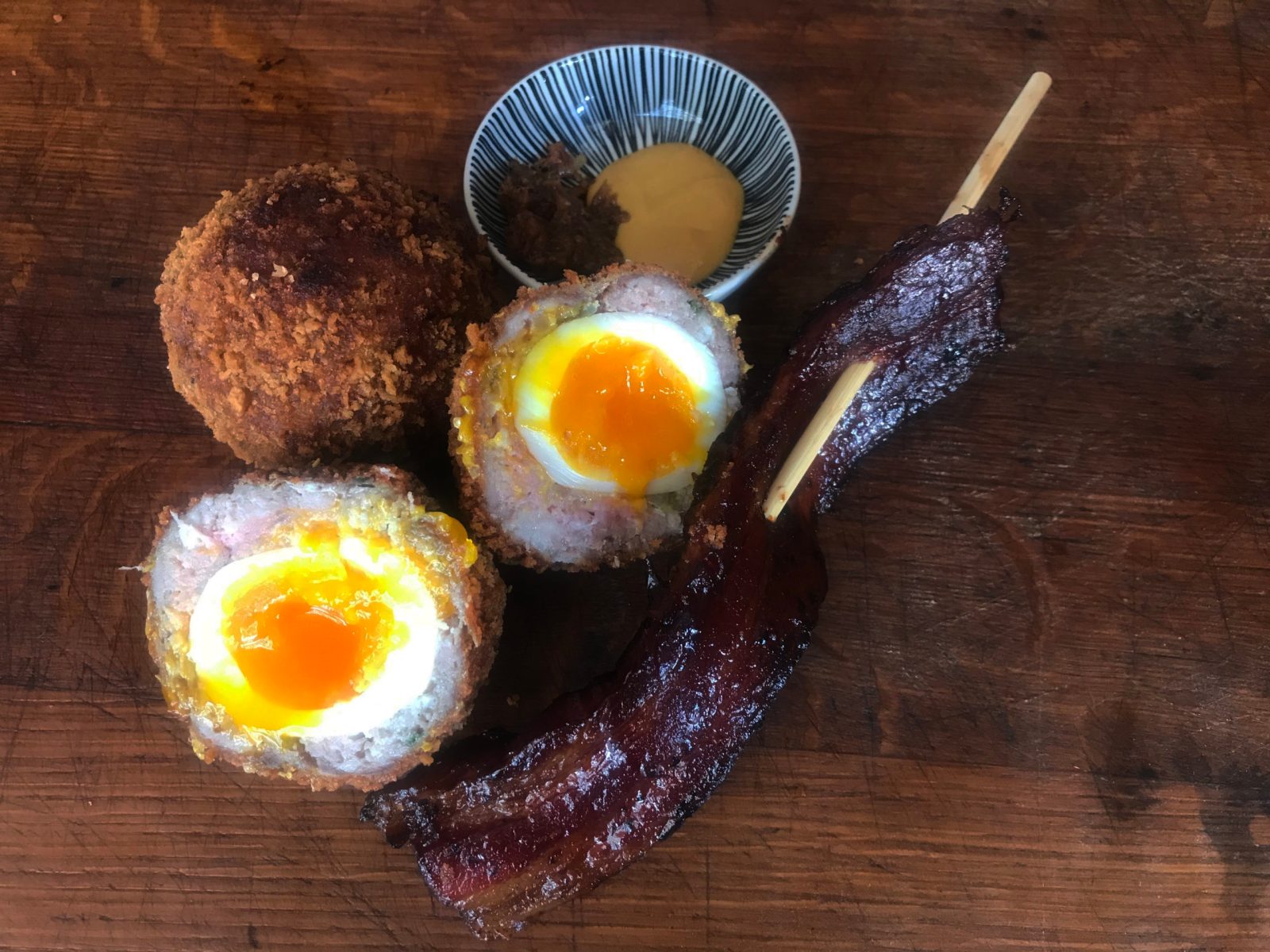 If you’d go to great lengths for a Scotch egg or an English-style pork pie, read on.

A few Saturdays ago I placed an order for six Scotch eggs and drove 130km from Cape Town to Hermanus to collect them. We were pretty hungry on arrival, and it made a perfect outdoor breakfast with a perky cortado. I love Scotch eggs and struggle to find them, but these were a revelation – inside the savoury, herby sausage-meat covering, the yolks were still soft.

Sue and Mike Preece routinely sell out of Scotch eggs within hours at their Saturday stall at the Hermanus Country Market, next to the cricket grounds. A friend had introduced us to these breakfast beauties during a weekend stay, when the market reopened after lockdown. It was like eating egg, sausage and toast, all in one bite.

“I have people tell me my Scotch eggs are the best in the world. Part of the reason they’re good is the proper extra-large eggs I buy,” explains Sue Preece. “I personally drive through the mud to get to the farmer’s wife for eggs, on the other side of our village. I fetch my eggs on a Thursday morning, they get boiled on Friday morning, and they’re in the meat casing by Friday lunchtime.”

But then the clincher: “I get up at 4am on a Saturday to fry the Scotch eggs before the market.” This is a woman who cares.

Preece’s Scotch eggs are encased in a Lincolnshire sausage mixture that has herbs and a few of her own additions. It’s a fine mince to stick around the egg, and also to the crumbing. “The egg has to hold its firmness overnight and not crack when I cook it. I fry them at 4am because the crispness you get from a Scotch egg isn’t going to last.” She personally peels boiled-to-wobbly eggs, not entrusting this delicate job to her kitchen staff. “It sounds silly but it’s that key to the final product.” She also goes to great lengths for just the right crumb base (I’m sworn to secrecy on those details) and is picky about her non-foaming oil supplier for deep frying.

In the low season, Preece makes 30 to 50 Scotch eggs, but she increases capacity to 120 per market day when it’s busy. “Over the years you find your best method for frying and other things. Everything about making it is through years of experience in my kitchen. I boil 40 eggs at a time for seven minutes, but maybe others will find the timing different.”

The couple live on Sanity Farm, near Wolvengat. It’s on a road halfway between Elim and Die Dam, and 17km from Pearly Beach. They used to farm lavender until 2007, and now have olive trees and press olives for farmers in the area. But their main income is from the sausage kitchen. It’s a separate semi-industrial set-up on the farm, with a mincer, sausage filling and mixing machine, where the curing and processing happens.

Front of the queue

Scotch eggs are not all that Preece makes. On the last market visit, I was introduced to delightful pork pies. The free-range pork for Scotch eggs, pork pies and sausages is sourced from a butcher located 25km from Wolvengat. A traditional pork pie in England is served cold or at room temperature. The most famous originated in Melton Mowbray, a town in Leicestershire. “I would fight to get to the front of the queue for a pucker Melton Mowbray porky,” said Nigel Cattermole, a Brit who’s worked in the local South African wine trade, when I asked around. “With Colman’s English mustard of course, not forgetting a pint of Marston’s Pedigree.”

Traditional recipes use a hot pork stock poured through a hole in the top of the pie, after baking. It’s designed to set around the shrunken meat when cool, filling the gap between meat and pastry.

“A pork pie customer is a bit of an addict. They are normally of British heritage,” says Preece, all matter-of-fact. She found a handwritten recipe for hot water pastry for her pork pie miniatures. It was inside husband Michael’s grandmother’s Mrs Beeton’s Book of Household Management from the 1920s. His family is originally from Lincolnshire. “Everything I do uses the forgotten skills of cooking,” says Preece.

This busy cook uses a Nigel Slater pastry recipe for her bigger 2.5kg pork pie, with jelly surrounding the meat. I didn’t taste that version. Her mini pies have bacon and her own spice preferences worked into the handwritten recipe. “I found the recipe only worked for the small pies because it had so much lard in it. I make my own pork fat for lard and let it set overnight,” she explains. “I would never be able to sell the pies at a good price if I was buying lard; it would be more expensive than butter!”

The Sanity Farm Kitchen mini pie mix of lard, flour, salt and boiling water forms a “gooey wedge” of hot water pastry. “A pork pie is a hand-raised pie manipulated with your fingers in the tin – you don’t use a rolling pin, except for the lid,” says Preece.  I love the pastry flakiness, enveloping a moist, coarse-ground, herbed sausage-like filling of shoulder, leg, belly and smoky bacon.

“The meat juices bubble out through the top of the lid during baking. I’d like to have jelly in the mini pies but it’s a technical thing. My customers have got used to the fact that the flavour in the meat takes away the necessity of having the jelly,” adds Preece. She’s right. The pork pie miniatures are moist and flavourful enough.

It’s why repeat customers order pork pies year in and out. “I’ve even had people fly in at the little landing strip on Heidehof farm from Arniston, Michael standing there with pork pies and sausages, waiting for them.” But it’s Scotch eggs that break records. “They’ve really taken off. I was selling to a farm stall in the Hemel en Aarde, but the owner said: Do you know I make no profit on these? I eat them all!” Turns out, he discovered his staff couldn’t resist the eggs either, so with a heavy heart, he stopped listing them.

Richard Bosman also makes miniature pork pies, for sale at the Oranjezicht City Farm Market in Cape Town, at weekends. The Bosman pork pie I tried had a blob of jelly under the lid. The meat filling had a fine texture and organ flavour. “When you make the traditional stock with the pig’s head and trotters, it’s the stock that oozes into the meat to give it that organ-y taste. Sometimes the jelly disappears from the sides that way during cooking,” said Bosman, when I queried the technique.

“We make nose-to-tail products at my factory, from cured meats to prosciutto. We end up with a lot of lard fat from the pig, which we can’t easily use. The traditional English Melton Mowbray pie pastry is made using pork lard, so I started making them to use up my lard,” he added.

A Richard Bosman pie has a fine minced pork shoulder filling with onion, garlic, parsley and bacon offcuts, encased in a Eureka Mills cake flour, pork lard and hot water pastry. His factory sells about 30 pies a week. “It’s something people from England relate to, it’s not for somebody who thinks pies have to be hot.” True words.

Back at the Hermanus Country Market, my husband went to find more English mustard, and returned with a fat wedge of hot bacon belly on a stick. It was grilled by Mike Preece, glazed with homemade barbeque sauce, and offered on the house. When somebody phones ahead to order six Scotch eggs, and also takes pork pies, they get noticed. DM/TGIFood