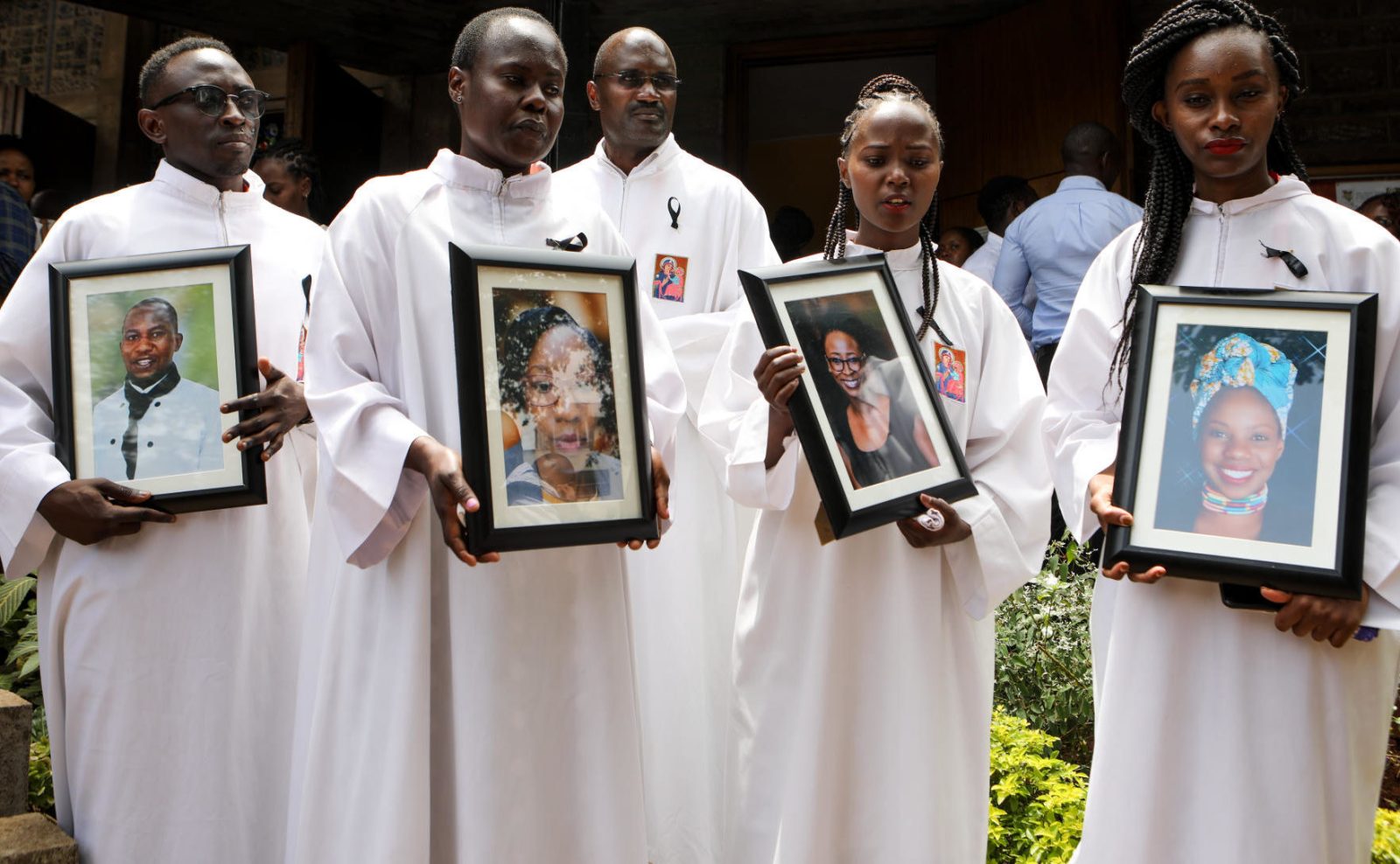 DusitD2 hotel staffs hold six portraits of their colleagues who died in an attack that killed 21 people within the compound that houses the hotel during a memorial service held in their honor at the Consolata Shrine in Nairobi, Kenya, 23 January 2019. AEPA-EFE/Daniel Irungu

Why have deployments of anti-terrorism police and community-police partnerships failed to stop recruitment by al-Shabaab?

Violent extremism is taking hold in Kenya’s Isiolo County, positioning the vast area as the centre of youth radicalisation in the country. In Isiolo, the problem has been brewing for several years, prompting the deployment in 2016 of the Anti-Terrorism Police Unit (ATPU).

Two known terror operatives who participated in some of Kenya’s worst attacks had links to the counties of Isiolo and Mandera in the north. Abdirahman Abdullahi, the son of a local chief in Mandera, participated in the attack at Garissa University. And Salim Gichunge, one of the slain dusitD2 hotel attackers and its alleged mastermind, was from Isiolo County. According to media reports, over 200 Isiolo youth have joined the violent extremist group al-Shabaab in Somalia since 2013.

Guyo Haro, a contract researcher based in Isiolo, says that despite the county’s long distance from the Somali border, al-Shabaab has found fertile ground to radicalise and recruit young people. This he attributes to Isiolo’s strategic location outside what is generally perceived as the radicalisation zone, away from the violent extremism hotspots of Nairobi, and the coastal and north eastern regions of the country.

Abdia Mohamud, Isiolo Peace Link Executive Director, told ISS Today that social media had been used by extremists to draw unsuspecting youth into terrorism. DusitD2 attacker Gichunge is said to have been radicalised while working at a cyber café in Isiolo.

She says the growing youthful population and increasing use of drugs in Isiolo have made the job of extremists easier, as drug dens are used to recruit and radicalise targets. There is also a lack of a counter-narrative against violent extremism in the online media, Mohamud says. With Covid-19 forcing learning institutions online, residents fear that school-going children will be even more exposed to social media and the risk of radicalisation.

Government concerns with the trend led to additional deployments of anti-terrorism police to Isiolo in June 2020. However, this deployment doesn’t seem to respond to concerns around online radicalisation and recruitment of youth into violent extremism. This may explain why the show of force, and the existence of community-police partnerships against violent extremism, has failed to stop recruitment by al-Shabaab in Isiolo.

Another reason is the failure of the county government to implement the action plan against violent extremism drawn up in 2018. As proposed in the plan, each sector of the population must feel involved in the fight against youth radicalisation and terrorism. And specific programmes should address the challenges faced by all segments of the community.

Police corruption is also a factor. Some officials in Kenya’s security agencies are involved in corruption that has turned anti-terrorism activities into a booming enterprise. Residents told ISS Today that some police construe many crimes, especially those committed by the youth, as being linked to radicalisation – whether or not this is the case. Police then demand bribes for the release of those they arrest.

In this way, residents say, these police officers allegedly use the anti-terror narrative as an avenue to enrich themselves. This strains relations between locals and police making it easier for al-Shabaab to recruit young people who are increasingly disaffected with security forces. There are reported cases of youths who left al-Shabaab and returned to Isiolo from Somalia, only to rejoin the group after experiencing persistent police harassment.

There is very little partnership between religious leaders, mainstream media and local radio stations to provide a counter-narrative, discussions or statements – such as ‘Islam means peace’ – that could neutralise the messages used by extremists to recruit. In Isiolo, partnerships of this sort to prevent radicalisation are insufficient, according to Mohamud.

Similarly, civil society organisations working in Isiolo have limited programming aimed at tackling violent extremism. Mohamud points to a lack of capacity and resources to cover the vast county that measures 25 336 km2.

In the face of these challenges, the county government should prioritise the implementation of the Isiolo County Action Plan on Prevention and Countering Violent Extremism. It may take time to show results though, and in the interim, the focus should be on the components aimed at building local civil society capacity to counter radicalisation.

The national police needs to combat corruption within its ranks. Relations between the community and police also need to improve, but this is unlikely to happen while police corruption prevails. Better relations will facilitate information sharing and help reduce police harassment of young people.

Social media is popular among the youth and could be used by government, civil society organisations and religious bodies to develop counter-narratives to violent extremism. Al-Shabaab currently has the upper hand, and to reverse this, strategies are needed to detect, prevent and address online recruitment.

The mainstream media should also include programming with anti-radicalisation content. The media and civil society organisations could form a formidable alliance against youth radicalisation. Research on what is making Isiolo and other counties in Kenya such as Kwale, Mandera and Wajir attractive to extremist groups would also be useful. DM