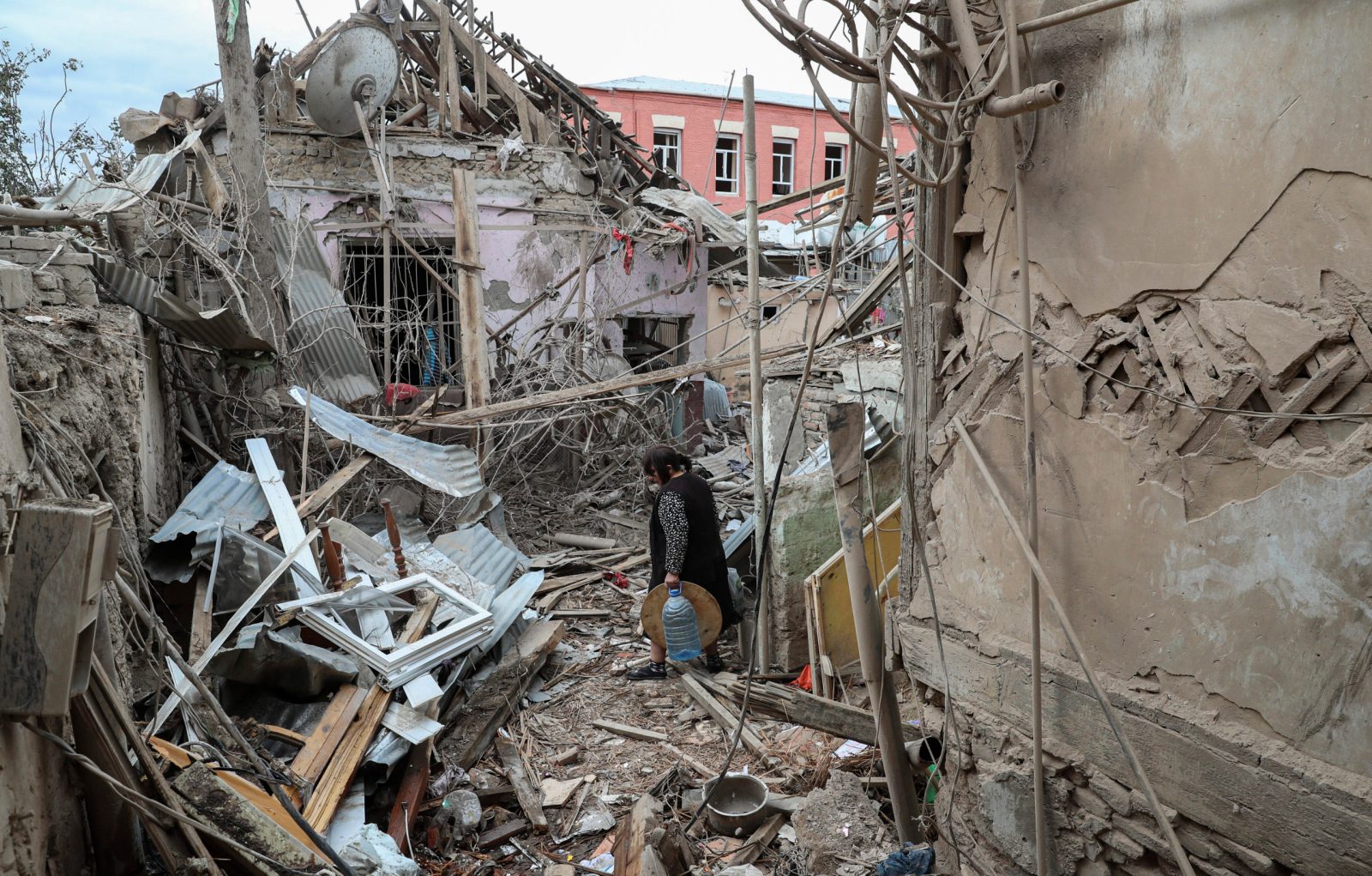 epaselect epa08724886 A woman walks in her house allegedly damaged by an alleged recent shelling in the downtown of Ganja in Agdam region in Nagorno Karabakh, 06 October 2020. Armed clashes erupted on 27 September 2020 in the simmering territorial conflict between Azerbaijan and Armenia over the Nagorno-Karabakh territory along the contact line of the self-proclaimed Nagorno-Karabakh Republic (also known as Artsakh). EPA-EFE/AZIZ KARIMOV

YEREVAN/BAKU/GENEVA, Oct 8 (Reuters) - Azerbaijan and ethnic Armenians fought new clashes on Thursday before talks at which the United States, France and Russia will discuss how to secure a ceasefire and avert a wider war in the South Caucasus.

The talks mark the start of a concerted drive by the three powers to halt fighting that flared on Sept. 27, increasing concerns about the security of pipelines in Azerbaijan that carry natural gas and oil to Europe.

Washington, Paris and Moscow are co-chairs of the Organization for Security and Co-operation in Europe’s (OSCE) Minsk Group that has led mediation in decades of conflict over the mountain enclave of Nagorno-Karabakh.

Under international law, Nagorno-Karabakh belongs to Azerbaijan but it is populated and governed by ethnic Armenians, who broke away in a 1991-94 war that killed about 30,000.

“The position of the United States has been clear and has not changed: both sides must cease hostilities immediately and work with the Minsk Group Co-Chairs to return to substantive negotiations as soon as possible,” a U.S. spokesman in Geneva said.

Hours before the talks were due to start, Azerbaijan said the city of Ganja, deep inside the former Soviet republic, had been shelled by Armenian forces.

One civilian had been killed in Azerbaijan’s Goranboy region and other villages and towns were fired on by ethnic Armenian forces, it said.

Azeri authorities say 30 civilians have been killed and 143 wounded since Sept. 27 but have not disclosed information about military casualties.

Nagorno-Karabakh said its main administrative centre, Stepanakert, had been shelled and that 30 servicemen had been killed, taking its military death toll to 350 since Sept. 27. It says 19 civilians have also been killed and many wounded.

Following the latest reports of fighting, Armenia said it had dismissed the head of its National Security Service in a presidential decree. It gave no reason.

FEARS OF A WIDER WAR

The fighting has raised international concern that Turkey, a close ally of Azerbaijan, and Russia, which has a defence pact with Armenia, could be sucked into the conflict.

The warring sides have ignored repeated ceasefire calls and the Azeri and Armenian leaders have been at odds over their conditions for halting fighting.

Azeri President Ilham Aliyev’s main demand is for Armenia to set a timetable for a withdrawal from Nagorno-Karabakh and surrounding Azeri territories, and wants Turkey involved in peacemaking.

He told Euronews in an interview that Bayramov’s attendance at the Geneva talks “shows who wants negotiations.”

Azerbaijan’s foreign ministry dismissed calls for a unilateral ceasefire which it said “maintain the status quo based on occupation.”

Armenia has ruled out a withdrawal from territory it considers historic homelands. It has also accused Turkey of military involvement in the conflict and says it has sent in mercenaries, allegations denied by Ankara.

“Our position has been and remains that the Karabakh issue cannot be solved through violence,” Armenian Prime Minister Nikol Pashinyan told Euronews.

Turkish President Tayyip Erdogan, who has accused the Minsk Group of neglecting the crisis for decades, said in comments published on Thursday that Ankara would continue to support “our Azerbaijani brothers with all our resources.”

“I renew my call for the international community to … take steps to end Armenia’s occupation of Azeri lands,” he told Qatar’s The Peninsula newspaper.

(Additional reporting by Tuvan Gumrukcu in Ankara and by Anton Kolodyazhnyy in Moscow, Writing by Margarita Antidze and Timothy Heritage, Editing by Raissa Kasolowsky)