Hannelie Coetzee: When art, science and action come together 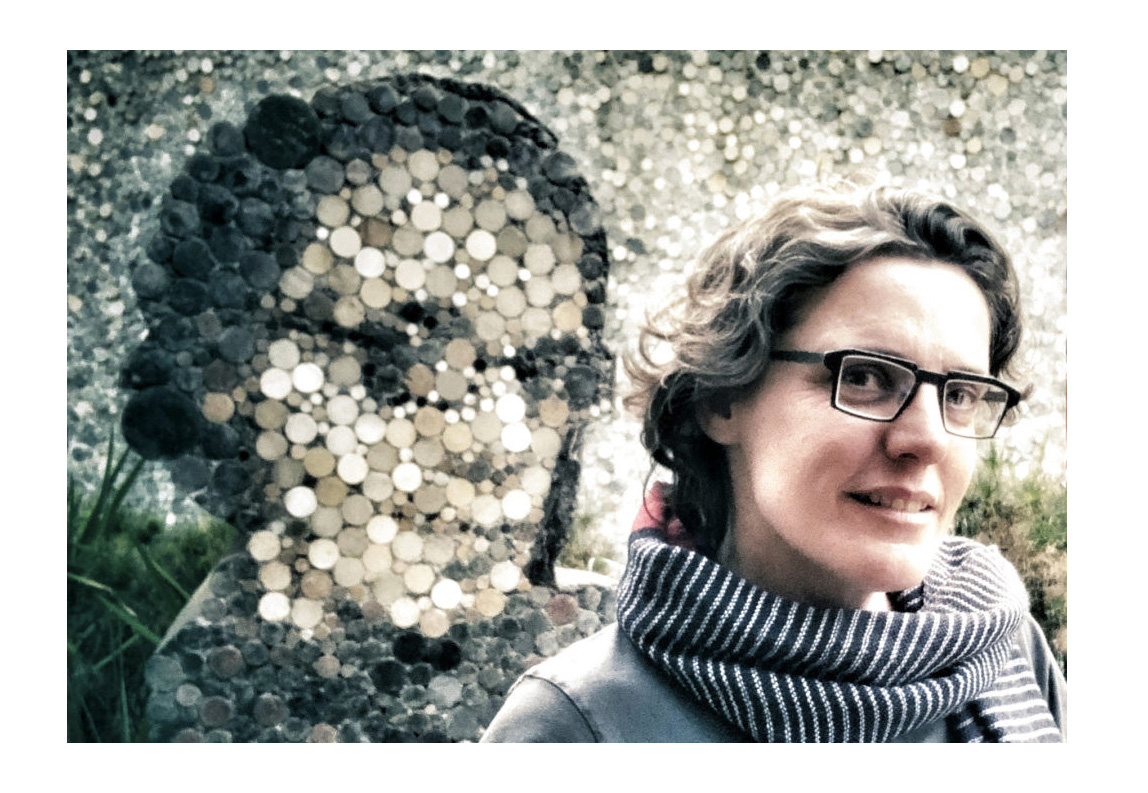 Artist Hannelie Coetzee stands in front of a work depicting her. It tells of a journey of reflection, transformation and the things that come into focus. (Photo by DuPreez Strauss)

The South African visual artist has always been about seeing things differently, listening more and digging – literally and metaphorically.

The first Joburg rains arrived in a deep rumble and deluge. Lead skies, full of watery promise, add to the making of Hannelie Coetzee’s “happy place”, she says. The life of water – also how it runs dead or dries to nothing — is a liquid thread that has dominated the ecological artist’s work. But it’s less a theme and more an underpinning of ecoconsciousness, sustainability and a growing urgency in her artistic message. Art as intervention, provocation and proactive solution is part of the work she has been compelled to create in adapting to life on a planet under pressure.

“I know that 100 metres from here the channel is running full right now,” she says from a rain-soaked Victoria Yards, in Lorentzville, which is where her studio is based. The channel is one of the concrete arteries of the Jukskei River – a key Joburg water source that’s also a casualty of pollution. And because it’s forced behind concrete, it stays out of sight and out of mind.

But not if Coetzee can help it. Coetzee has a myriad ideas and projects planned for the river. Inside these channels and stormwater pipes she sees where and how they intersect with sewer pipes and detritus of all kinds. This is the undercity, “a reverse world” as Coetzee describes it.

Video: Finding the eye of the Jukskei River

She’s been exploring and researching the clues from what is discarded by people and incorporating these into her work – both her art and the MSc that she’s been invited to do at Wits. It’s also given her new ideas for interventions through the NPO Water For The Future that she’s founded with two like-minded water activists Romy Stander and Paul McKenzie.

Knowing where the water comes from, where it goes and what it carries is understanding waste, consumption and value in a divided city that is nevertheless bound by dependence of a finite natural resource.

“We are conditioned to think of waste as stinky and gross, but we are missing out on looking for solutions and possibilities,” she says.

Coetzee has always been about seeing things differently, listening more and digging – literally and metaphorically. Many of her works over the past decade are public art pieces and land art works across Joburg.

“I would dig and dig and beyond the concrete would be the ecology. And some people who walked by every day while I worked would eventually start talking to me and telling me their stories and I would share some of mine,” she says.

It made Joburg, in all its complexities and collision points, her muse. City life a teacher – mostly of lessons she’s needed to unlearn. Lessons of not fitting in but having a role to play, of family heritage and hushed histories that she can claim but also set down, so she can walk away lighter.

“I know I’ve been on the wrong side growing up under a Nationalist government and I’ve had to find my own clarity through understanding manipulation and suppression. I’ve understood how hard it is for people to change, but if we don’t adapt, we don’t evolve – we die,” she says.

This multilayered story of transformation, reflection adapting, resilience and also the cycles of all things is emphasised in her works. The close-up view of her Muse II, Wild Walls (2020) in Sandton is an array of plants growing in her “Wild Tiles”, smart-designed mini ecosystems that form a vertical garden for succulents. Zooming out the water-wise plants become pixels forming a face, the muse, and becomes one of her signature pixelation art pieces.

You may miss it though at first glance. It’s Coetzee’s intention that even at huge scale there should be a personal revelation, a surprise discovery maybe. Her work isn’t shouty in a city that can be loud with visual bombardment.

She says it makes one of her “most in focus” works the 10-storey mural in Braamfontein titled Ndzundza/Nzunza (2018). The image is of a woman in a Ndebele headdress. It’s made in dots of plates – they’re seconds, plates that didn’t make the commercial grade but are joined together to become another pixelated Joburg public art treasure.

“It’s always about waste, offcuts, upcycling and reusing things,” she says of the materials for her art. Sometimes it’s about things that don’t last at all – the ephemeral nature of public art, also of life itself in an age of a climate crisis, is deliberately unsentimental. For Eland and Benko and Locust and Grasshopper, which were large-scale controlled burns in 2015 and 2017, they lasted for minutes as performances. She collaborated with scientist Sally Archibald to explore the role of fire in nature for the performance burns. The conversations though have endured to shift the relationship between science and art, between the artist and her public, and even within herself as artist and activist.

Coetzee’s other recent project has been creating ecotree seats. These multifunctional public art pieces are essentially rain-harvesting devices. They’re built as public seating but divert rainwater from the kerbside run-off. They trap solid waste that would otherwise clog up stormwater drains and feed water to a tree that grows to give shade and shelter.

These ecoseats she designed with the input of scientists, engineers and also children, who helped her mosaic the first seats she put up at Victoria Yards. She knows that inviting people to just sit down changes their idea of space and belonging, and that perceived no-go zones in the city can feel safer.

Coetzee says actions and making ideas real are the antidote to thinking that nothing shifts and nothing gets better.

She says this even while acknowledging that a year of Covid has been hell, especially for the creative industries. It’s been about surviving lean in lockdown but also confronting all that bubbles to the surface in a time of uncertainty and scarcity.

“I don’t mind ruffling feathers sometimes though,” she says of forging ahead nevertheless. Her science community, even her art community, needs challenging sometimes, she says. As for the city’s bureaucrats, she’s “happy to piss them off” if it gets them out of their boxed-in ways of thinking.

“I’m used to being the rebel in the room, but I do it because I think we need more people to see that there are possibilities and that they can be part of building a healthier environment,” she says.

Sometimes though Coetzee just surrenders to her hammock at home; there may be a glass of wine and some conversation with her wife, Réney Warrington, or a binge night of good movies.

It’s the recharging she needs to get back to her art and her agenda. It is because the tipping point of the climate crisis looms. The scientist in her knows it, the artist in her craves the creative disruption and the activist in her can’t look away. DM/MC/ML

Coetzee will be hosting a ticketed walkabout on 31 October 2020.