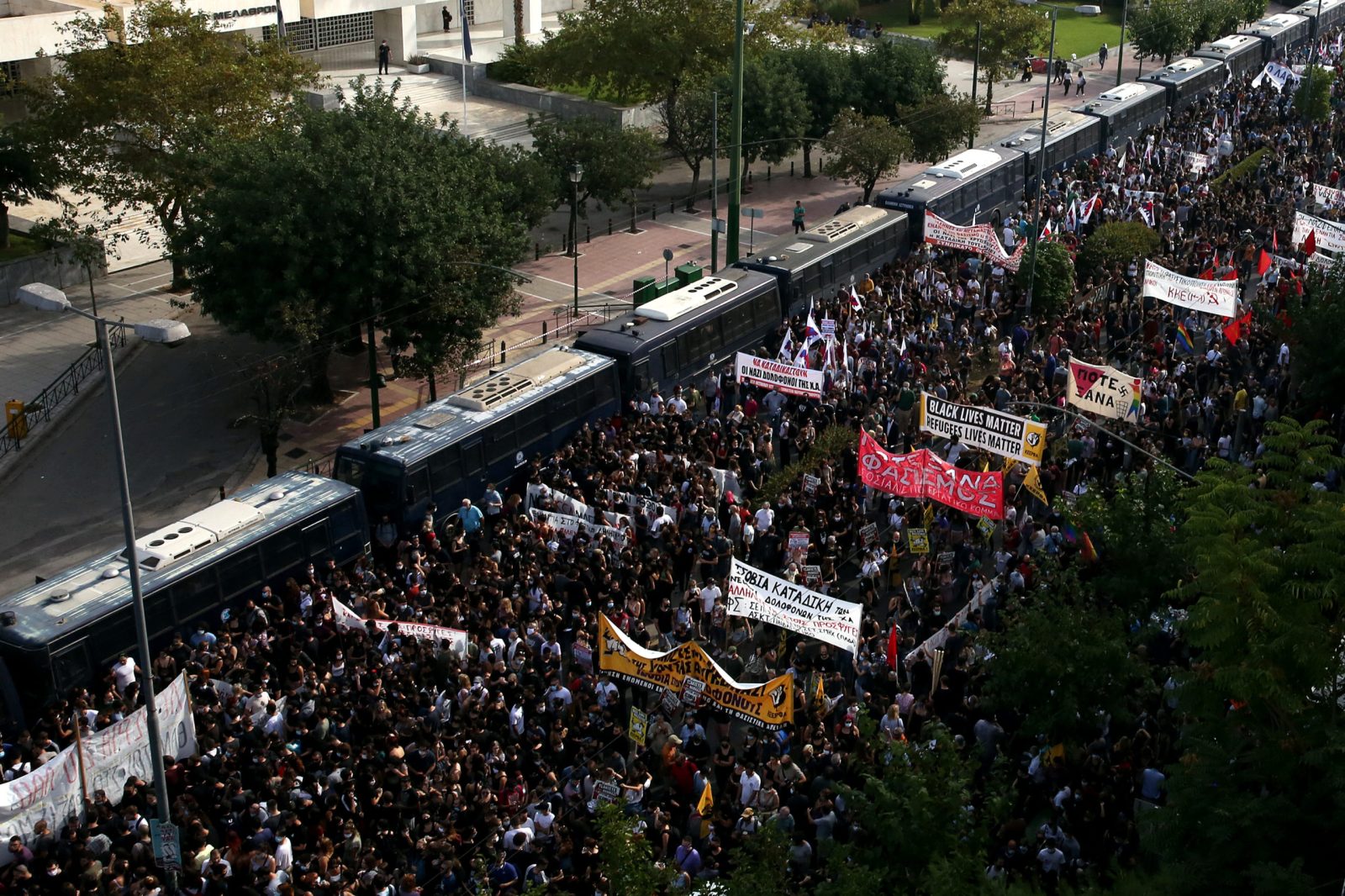 epa08725790 People gather outside Athens' courthouse, as they wait for the verdict of the trial of the ultra-right party Golden Dawn (Chrysi Avgi), in Athens , Greece, 07 October 2020. The verdict in the trial of the ultra-right party Golden Dawn - a trial unprecedented on a global scale in recent history - is due to be announced by an Athens Criminal Appeals Court. With its ruling, the court is called on to decide whether the accused are guilty or not guilty of forming a criminal organisation and to provide an answer to an issue of critical legal and social importance, which will have a profound impact on the present and future, regarding a political party that was elected to the Greek and European parliaments in three separate elections. Based on the charges, Golden Dawn was a criminal organisation that had the legal form of a party and enjoyed enhanced constitutional protection as a result. EPA-EFE/ORESTIS PANAGIOTOU

ATHENS, Oct 7 (Reuters) - A Greek court on Wednesday declared far-right party Golden Dawn a criminal group, effectively banning a radical organisation that was once the third-largest party in the country.

The courtroom cheered, as did thousands who gathered outside the Athens appeals court. But the mood on the streets turned sour when isolated groups of self-styled anarchists threw petrol bombs at police, who responded with tear gas and water cannon.

Golden Dawn was catapulted from obscurity to infamy in the space of a few years, attracting supporters with a xenophobic rhetoric at the height of Greece’s debilitating debt crisis.

But it started to unravel in September 2013, when a party supporter was arrested for the killing of Pavlos Fyssas, a musician and rapper aligned to the political left.

Golden Dawn members, including its leader Nikos Mihaloliakos, were rounded up and authorities launched an inquiry into whether the group was a criminal organisation in parallel to the probe into Fyssas’s death. The trial started in 2015.

Before the court ruled that the party leadership was running a criminal group, the court found Golden Dawn supporter Yiorgos Roupakias guilty of Fyssas’s murder.

Fyssas’s black-clad mother Magda, who has not missed a day since the trial started, burst into tears at the verdict ruling Golden Dawn criminal. “Pavlos you did it,” she said, according to Greek media.

The Golden Dawn members, including Mihaloliakos, were not present in court on Wednesday.

They were arrested in 2013, the first time that elected politicians had been detained in Greece since a military coup in 1967, and released after their pre-trial detention period expired.

Prosecutors had charged 65 people, including 18 former Golden Dawn lawmakers, with being members of a criminal group. Their trial started in April 2015. At the time, the party said it was the victim of a politically motivated witch-hunt.

Dozens of others on trial, party members and alleged associates, face convictions on charges that range from murder to perjury, linked to a spate of violent attacks on immigrants and left-wing activists.

Wednesday’s verdict sets the stage for the high-profile case to proceed with the court looking into sentencing for the murder of Fyssas and other violent attacks.

“We must send a message to the younger generations, a message against fascism,” said 69-year-old Sophia. “It’s our duty to democracy to be here today, to show we are standing up against such criminal actions.”

“The accusations against the leaders and members of Golden Dawn, including the murder of Pavlos Fyssas, expose a fissure that exists not just within Greece but across Europe and beyond,” said Nils Muiznieks, Europe director at Amnesty. (Additional reporting by Angeliki Kountatou; Writing by Michele Kambas and George Georgiopoulos, editing by Emelia Sithole-Matarise and Giles Elgood)