Ahmed Seedat: The sneaker reseller plotting a Fourth In... 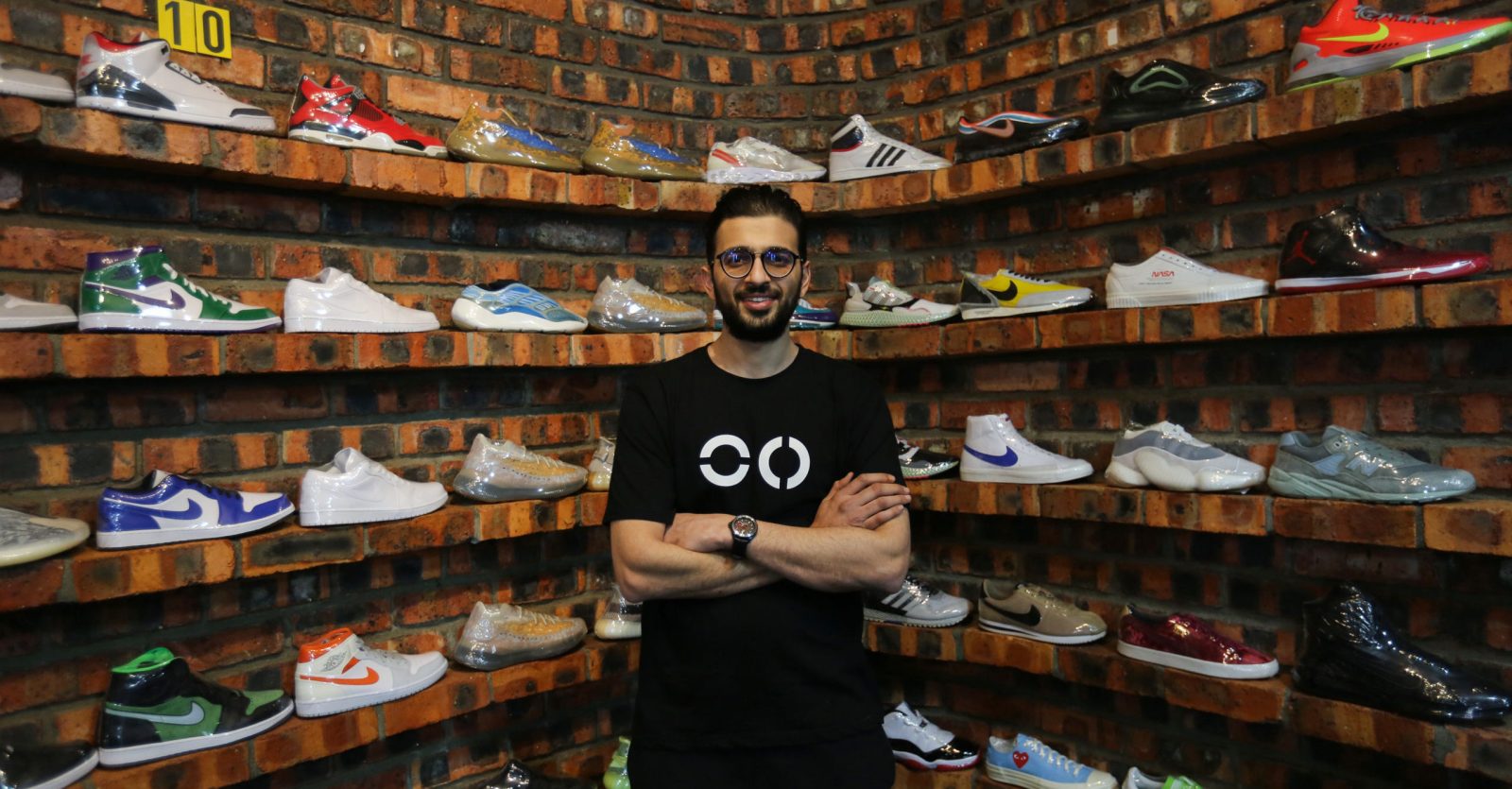 Ahmed Seedat poses with some of his exclusive sneakers at the Cape Town branch store of his store called Court Order. The store also offers a sneaker laundry service and has branches in Cape Town and Johannesburg. Daily Maverick. 19.09.2020. Picture: SHELLEY CHRISTIANS

As the sneaker resale business grows into a projected $30-billion behemoth by 2030, collectable kicks have become one of the world’s most popular alternative asset classes. Sneakers are arguably the coolest investment vehicle on the planet — and third-generation sneaker salesperson Ahmed Seedat is all in.

Ahmed Seedat was eight years old when he sold his first pair of sneakers. He was 10 when he flogged a discounted pair of size six kicks to a customer with size seven feet. Fast-forward nearly two decades and the 27-year-old entrepreneur now owns a popular sneaker resale chain called Court Order, filled with hundreds of the world’s most sought after high-end kicks, their prices averaging R3,000 a pair.

But Court Order doesn’t define itself as a retail store – it’s a 4IR-ready e-commerce marketplace. Its brick-and-mortar presence in Cape Town and Johannesburg, along with its focus on sneakers, is temporary but strategic. “We’re doing this to create geographic reach,” and brand awareness, Seedat tells Daily Maverick.

“Court Order is a consignment model, so we don’t own any of the stock,” Seedat continues. Essentially, collectors with sneakers to sell (most of which have never been worn) entrust them to Court Order, which displays them on the shelves in return for a commission when a sale is made. A hypermodern pawn shop, if you will. “What this does is limit our risk. We don’t have to buy or hold any product,” says Seedat. “But, that said, we have to secure the product.”

That lesson was learnt the hard way. In November 2018, within days of opening the Johannesburg branch of Court Order, Seedat’s staff and his brother-in-law and co-manager, Ahmed Akoo, were tied up at gunpoint by armed thieves, who stole hundreds of pairs of shoes that didn’t belong to the store.

The heist was too organised to be opportunistic, and it mirrored the modus operandi of a spate of other sneaker store robberies in Johannesburg around the same time. Still, unfamiliar with the specifics of Seedat’s business model, his insurance company found the appropriate loopholes and left him with most of the liability. He took out loans to pay back every last one of the consignors in order to maintain his credibility as a reseller.

“This business is my life,” says Seedat.

“This company is an offshoot of a business that my grandfather started in the 1980s, and that’s part of what keeps me at it. This is an identity for me,” he adds. “We used this to set a precedent for the trustworthiness of the company.”

Although it nearly crippled the fledgling business, the incident wasn’t the first or even the second violent robbery Seedat has experienced in his more than two decades of selling sporting goods in South Africa. He refuses to allow it to taint the legacy of a long-standing family retail obsession he so carefully safeguards.

“It’s about keeping going, because technology, scale, big data – all of that will be better than the criminals soon. We just need to band together,” Seedat says.

While Jack Lemkus in Cape Town holds the title of South Africa’s oldest sporting goods store, Seedat’s General Dealer in Hartswater in the Northern Cape was one of the first to be established by black people, selling to black people.

It all began with Seedat’s grandfather, Dawood, who established Seedat’s Cycle Store in Newcastle, before moving on from the burgeoning business.

In the late 1980s, when Seedat’s father, Mehmood, returned from India with a degree in dentistry, he moved his parents and young family to one of the only places in South Africa he could work as a black professional – the “Bantustan” of Bophuthatswana.

While establishing his practice at a hospital in Taung, he also set up a tuckshop for his mother and father to run. It quickly became two trestle tables at a flea market selling leather goods, then a store in the white farming town of Hartswater and, after just three years, a 500m2 general dealer on the main road, with customers from across the Northern Cape and beyond.

“I grew up in that business,” says Seedat.

“It really set the tone to be this little kid from this place in the world that nobody cared about… I developed a voice in my head to keep me company and to talk to about things,” Seedat says.

That voice – which Seedat nowadays calls his gut – and the three-generation legacy of against-all-odds success in retail, are the sounding board and driving force behind Seedat’s growing success and his ambition to crack the e-commerce space as a digital general dealer, with the sneaker consignment model at its core.

In spite of the lingering effects of the robbery, compounded at first by Covid-19 and the resulting lockdown, Court Order has seen a remarkable turnaround.

It mirrors an unexpected turn of events for the industry as a whole: while most markets are reeling from the effects of 2020’s myriad challenges, the sneaker resale industry has never performed better.

Court Order’s American competitor, StockX, reported its biggest selling months ever in May and June, while Los Angeles-based streetwear giant GOAT has just raised $100-million to extend its e-commerce business, bringing its valuation to a dizzying $1.75-billion.

“There are few things out there that people care about more than sneakers, so we’ve got a commodity that people love,” says Seedat.

“That’s given us a playground to roll out a version 1.0 and a 2.0, so we can move on to the boring stuff which makes money.

“So this foray into sneakers has been fantastic,” he says. “I’ve learnt a lot, it’s made a man out of me. As an entrepreneur, adversity removes a level of complacency.

“The corner that adversity forced me into has given me some of my best work,” says Seedat. “It’s allowed me to see things that I didn’t see before.” DM168

What’s the image on your phone’s home screen?

The original wallpaper – it’s not a problem that needs solving.

I would buy a hungry person a meal. Or two.

I’m lucky to not have an answer to that. However, the worst piece of advice that I didn’t take: Don’t get into family business, it never works and will end badly. It was the best decision I could’ve ever made.

The thing you wish you’d learnt earlier in your life?

I wish I’d learnt the virtue and value of patience earlier in my life.

Three books that have changed your life.