South Africa is one of the few economies where workers... 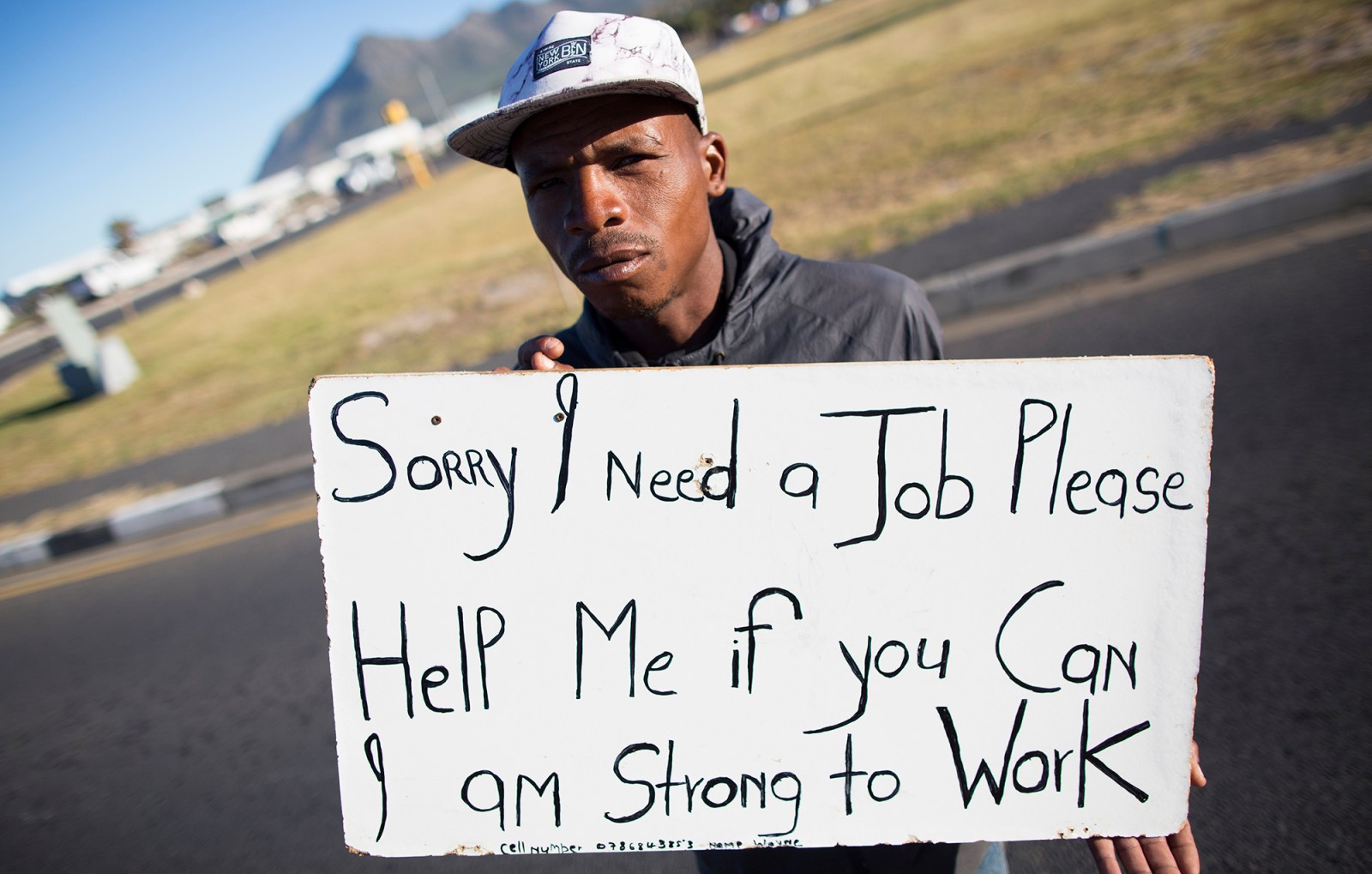 An unemployed man holds a self-made advertising board for jobs. (Photo: EPA/NIC BOTHMA)

Unemployment has been the temperature gauge of how long it may take to get back to prepandemic economic levels. Latest statistics show that there is still a long, hard slog ahead.

Unemployment tallies have been closely watched because they are viewed as the most visible record of the economic damage wrought by the Covid-19 pandemic and economic measures to contain it over the past nine months. The latest figures are not painting a pretty picture.

In the US, which has a far more flexible labour market than South Africa, jobless data improved quickly and markedly earlier on in the crisis, but has since vacillated and the last set of employment data ahead of the November 3 elections are viewed as a cause for concern. 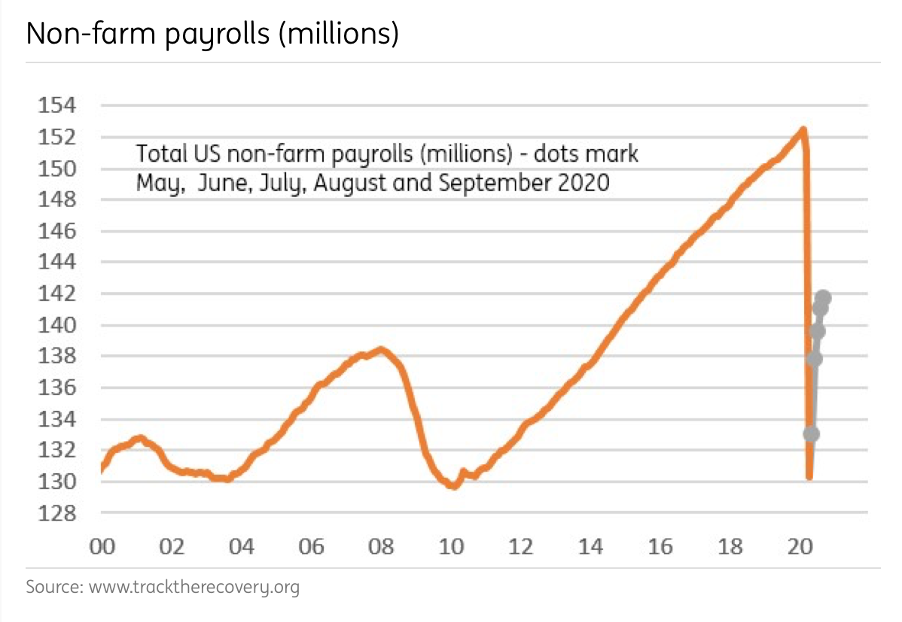 Says ING: “While there has been a net upward revision of 145k to the previous two months of data, it doesn’t change the narrative of stalling momentum in the jobs market. In addition to a growth picking up momentum, the much-anticipated fiscal stimulus is seen as critical to improving labour market conditions in the US.”

ING concurs, saying: “While employment continues to grow, the pace of gains is slowing while government jobs are being lost. It underlines the argument for additional fiscal support.”

The bank adds that the US is “a long, long way from full employment” and warns that the challenges posed by Covid-19 will be felt for many more months, with election tensions further weighing on investor and macroeconomic sentiment. 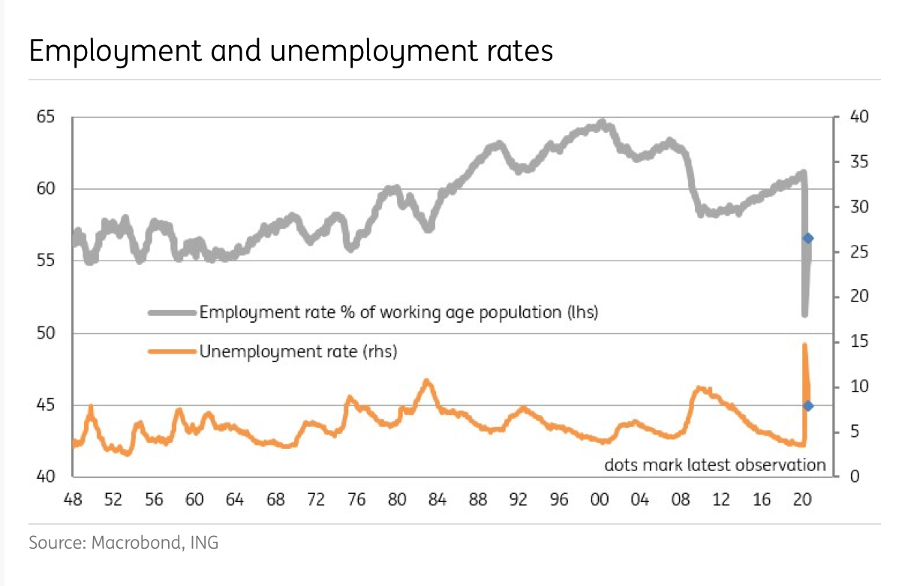 Equity investors adopted an optimistic view of the likelihood of the stimulus package coming to fruition at the start of the last quarter. The initial sell-off triggered by the news that Trump had tested positive for Covid-19 quickly turned around earlier this week when he went back to the White House, and focus again turned to the likelihood of the passing of fiscal stimulus. ING says expectations are focused on a fiscal package coming into play at the start of 2021 — two months after the election.

Domestically, the evidence of how badly hit South Africa has been on the employment front is just coming to light, with the release of second-quarter employment data last week, which at first glance was confusing.

In South Africa, last week’s employment data, which showed an inexplicable decline in the unemployment rate, caused much consternation. However, as the Bureau for Economic Research pointed out this week, the expanded 43.3% unemployment rate, which includes those who are able and willing to work but who were not looking for work during the lockdown, is the more appropriate measure during the pandemic. This measure of unemployment contrasts with the 23.3% headline rate.

The impact of the virus on employed individuals was also evident in the 20% who were not paid during the second quarter and another 20% whose pay was reduced. Thus Covid-19 has also posed other challenges to those who understandably are considered lucky to have been employed at all through the crisis.

It is likely to take some time and will require considerable growth to reach prepandemic employment levels, which were already a problem in South Africa. Until then, however, it will take patience and resilience.

Recent research conducted by the ADP Research Institute gives valuable insight into what has determined resilience in the face of the Covid-19 challenges and what workplace changes have been a result from the pandemic as well as which will remain permanent features of the landscape.

For its Workplace Resilience Study, the organisation surveyed some 25,000 adults from 25 countries, including South Africa. The samples were chosen to reflect the demographics of the workforce in these countries, while the institute defined workplace resilience as “the capacity of an individual to withstand, bounce back from, and work through, challenging circumstances or events at work”.

The survey arrived at some surprise findings that were contrary to the theses put forward by the author of the report, Head of People and Performance Research Marcus Buckingham. For instance, the most resilient workforces were expected to be found in countries that had responded most effectively to the epidemic. However, the reverse proved to be true. Countries like Brazil, India and the US, which have been least effective in managing the spread of the virus, had more resilient populations.

The research found that the two primary drivers of resilience were: exposure to people who had suffered from Covid-19 and those who had experienced tangible changes in their lives as a result of Covid-19. 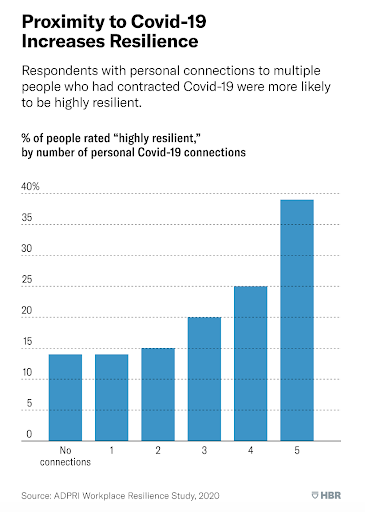 Their findings showed that people who had been exposed to members of their family, work teams or wider circle who had Covid-19 were 3.9 times more likely to be resilient, as per the graph. Buckingham felt that the results strongly suggested that individuals discover their resilience “only when they are forced to meet unavoidable suffering full in the face”.

He explains: “It’s when we face that reality, and see ourselves and how we respond to it, that we find the basis for resilience. The real is almost always less scary than the imagined, and the reality of the disease helps you with knowing what you’re capable of, which is strengthening.”

When it came to people who had experienced changes in their working conditions, there was a direct correlation between the number of changes and the degree of resilience of these workers. Changes included shifting to sheltered, in place conditions, working remotely, changes in work hours, layoffs or furloughs and increased use of technology.

Says Buckingham: “What was surprising was that some people had experienced more than five of these changes. Those that did were not only more convinced that these changes would be permanent, but they were also 13 times more likely to be highly resilient.”

The author concludes that the more changes an employee had to absorb, the more resilient they were, as shown in the graph. 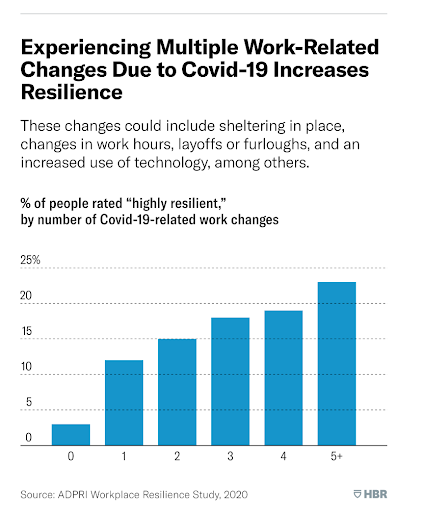 What significance do these findings have for employers?

Buckingham says leaders should not downplay the reality of challenges in the workplace and should instead be direct about the real-world changes that their workers will have to make in life.

“Show us in practice what our ‘new normal’ is and why, and then trust us to figure out how to live happily and healthily inside this new normal.”

These changes highlight how different the “new normal” is likely to be than the old normal.

The more we understand what it might look like, and what workers will require — other than employment at the very least — the more likely the new normal will be an improvement on the past. BM/DM