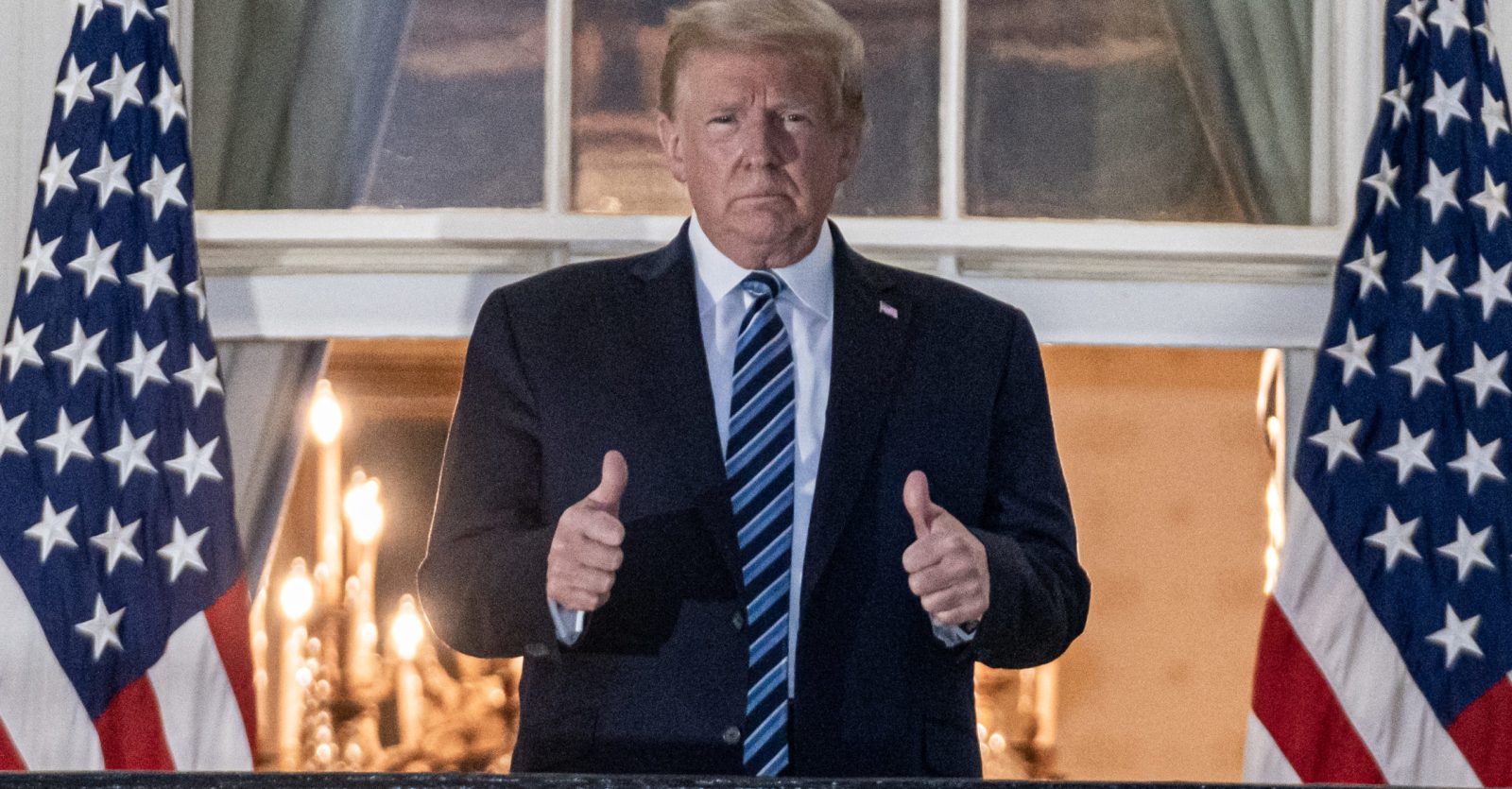 US President Donald Trump returned to the White House on Monday 5 October, amid questions about his treatment and health. A doctor on Trump’s medical team said the president had been given remdesivir as part of his treatment.

Arriving by helicopter at the White House, President Trump walked across the lawn and up the steps to the upper level of the residence, where he stopped for a photo op. Taking off his mask to wave, he gave a thumbs up and saluted Marine One as it departed.

Trump received three doses of remdesivir while being treated at the Walter Reed Medical Centre. Dr Brian Garibaldi told journalists that Trump would receive five doses in total – a fourth before leaving the hospital and a fifth and final one on Tuesday 6 October, at the White House. Garibaldi said the president would continue to be treated with dexamethasone.

News of the steroid treatment was greeted with concern by other medical experts. Trump’s doctors said they had administered the dexamethasone after his oxygen levels dropped. One of the concerns around the treatment is that it suppresses the immune system and can cause side effects like headaches, aggression, anxiety and irregular heartbeat.

Referred to by some American media as the “patient-in-chief”, news of Trump’s intention to leave the hospital was broken by the patient himself, via Twitter.  Early on Monday he tweeted that he would be leaving the hospital at 18:30, and that he felt “better than I did 20 years ago”.

I will be leaving the great Walter Reed Medical Center today at 6:30 P.M. Feeling really good! Don’t be afraid of Covid. Don’t let it dominate your life. We have developed, under the Trump Administration, some really great drugs & knowledge. I feel better than I did 20 years ago!

Trump was admitted to Walter Reed on Friday 2 October after it emerged that both he and the First Lady had contracted Covid-19. Three days later, following his tweet that he was leaving the hospital, concerns were raised about him returning to a White House that was still finding new Covid-19 cases.

And while Trump said in his tweet, “Don’t be afraid of Covid”, his doctor, Sean Conley said the president would be monitored very carefully at the White House and that Trump may not be entirely out of the woods yet.

Trump’s determination to put Covid-19 behind him comes as the country faces a daily increase in new coronavirus cases. The global count stands at just over 35 million cases, with the US accounting for around seven and a half million of those. America has a death toll of just over 210,000 and latest reports indicate that numbers of positive cases are rising in over half a dozen states.

On Sunday 4 October, CNN reported that only three states were reporting a decline in cases for last week. From September 29 to 3 October, the US averaged 46,500 new cases daily.

At the weekend, New York mayor Bill de Blasio proposed closing businesses in nine New York neighbourhoods after hotspots emerged just over a week ago. This saw the unhappy coincidence of numbers in New York City rising just as restaurants were slated to begin 25% indoor dining.

On Monday 5 October, New York governor Chris Cuomo said rather than shut down non-essential businesses, state police would issue fines to people who do not wear masks.

Many of the New York City hotspots have large Jewish Orthodox populations – like Borough Park, Sheepshead Bay and Bensonhurst in southern Brooklyn  – and Cuomo is scheduled to meet with Orthodox Jewish leaders on Tuesday 6 September. The governor has said he will close down synagogues if they do not strictly adhere to physical distancing regulations.

Cuomo also ordered the closure of schools in hotspot areas, meaning that some 100 public NYC schools would close on Tuesday 6 October. DM

An Wentzel is night editor, specialist reporter for Daily Maverick, she went to the USA to visit family as the pandemic struck and is currently marooned in the land of the ‘free’.