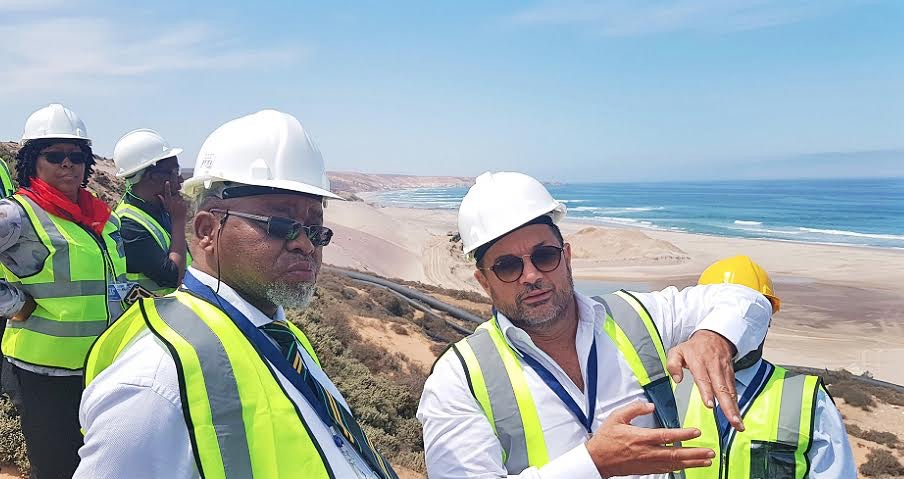 Minister of Mineral and Energy Resources Gwede Mantashe and Australian mining boss Mark Caruso during the minister’s visit to the Trombone mineral sands mine on the West Coast in February 2019. (Photo: John Yeld)

Mark Caruso, the chief executive of an Australian-based mining company, faces criminal charges of assault and burglary in Australia. He has now stepped down as chairman of Mineral Commodities, the parent company of two South African ventures.

Perth-based Caruso has temporarily relinquished his position of executive chairman of the board of mining company Mineral Commodities Ltd (commonly referred to as MRC) while he defends himself against the charges, but has retained his position as chief executive.

This was announced by the Australian Securities Exchange-listed company on 2 October.

MRC is the parent company of two South African mining subsidiaries: Mineral Sand Resources (MSR) that produces heavy minerals from West Coast beaches at its Tormin mine near Lutzville, and Transworld that has been attempting to develop a titanium mine at Xolobeni on Pondoland’s Wild Coast for more than a decade.

According to the Australian justice department’s on-line court portal, Caruso is due to face three charges – two of common assault and one of aggravated home burglary – in the Mandurah courthouse on 13 October. Mandurah is a coastal city in Western Australia, some 72km south of the state capital Perth. Caruso has not yet entered a plea in respect of the three charges.

Caruso is due back in the same court on 5 November in connection with a separate charge of “without lawful excuse trespassing on a place”. He has entered a plea of not guilty to this charge.

In a statement on Friday, MRC said that the charges stemmed from “an alleged incident which occurred whilst Mr Caruso was assisting a friend in enforcing an abandonment order and a subsequent property seizure and delivery order at that friend’s premises”.

According to an Australian law website, “abandonment” in the context of law is the relinquishment of a legal claim or interest, with the intention of never reclaiming it.

MRC’s statement continued: “Mr Caruso has advised the company that he considered himself to be acting with lawful authority and in accordance with all relevant laws and that accordingly, the charges will be vigorously defended. Mr Caruso has retained an eminent Senior Counsel to act.

“Mr Caruso has elected to step down as a director of the Company whilst he defends the charges. Mr Caruso will continue in his role as chief executive officer during this period as the Board has confidence that he will continue to perform his duties in the best interests of the Company.”

The story was picked up by the Australian media after MRC’s statement on Friday, but they did not reveal any details about the incident(s) that gave rise to the charges.

In a piece published on Sunday, Financial Review columnist Myriam Robin wrote that the share price of MRC had “not moved a jolt” in response to the news of Caruso’s stepping down as executive chairman. “Just as well, given Caruso is exposed to some 79 million shares in the mineral sands miner, worth $25.3-million [about R300-million] at Friday’s share price,” she wrote.

According to Australian daily news service Mining News, MRC is valued at about A$145-million (about R1.7-billion).

A screen-grab of criminal charges being brought against Mark Caruso, from the Australian justice department’s on-line court portal.

The news about Caruso’s troubles with the Australian criminal justice system comes just days after the first shots were fired in what promises to be a major legal battle between South African environmentalists on one side, and Caruso’s company and the South African government on the other, over a massive expansion of Tormin’s mining operations along the West Coast.

The controversy centres on approvals to MSR to hugely expand its mining activities in terms of its existing limited mining right at Tormin, rather than having to apply for full new mining rights.

If this expanded mining goes ahead, a huge section of the West Coast consisting of some 120km between the Olifants River estuary in the south and Hondeklipbaai in the north will be effectively off limits to the public and many of its beaches will be mined, without full new and updated environmental and social impact assessments.

On 11 September, MSR announced that it was starting with mining activities for this proposed expansion, approval for which had been controversially granted by the South African mining and environment departments.

Ten days later, the Centre for Environmental Rights (CER) lodged the first of a number of legal challenges against MSR’s expansion plans.

CER attorney Zahra Omar said MSR’s attorneys had notified them that the mining company was opposing their challenge.

“We are now considering bringing an urgent interdict over the next two weeks in order to stop MSR from continuing its mining activities for the expansion. We are in the process of contacting potential co-applicants for this interdict, including those who can speak to the irreparable harm that may be caused to the environment should these mining activities be allowed to continue,” Omar said.

Two of the CER’s former attorneys are among six local defendants fighting three defamation cases with total damages claims of R14.25-million being brought by Caruso in his personal capacity, and by MRC, MSR, and MRC’s BEE partner Zamile Qunya. DM