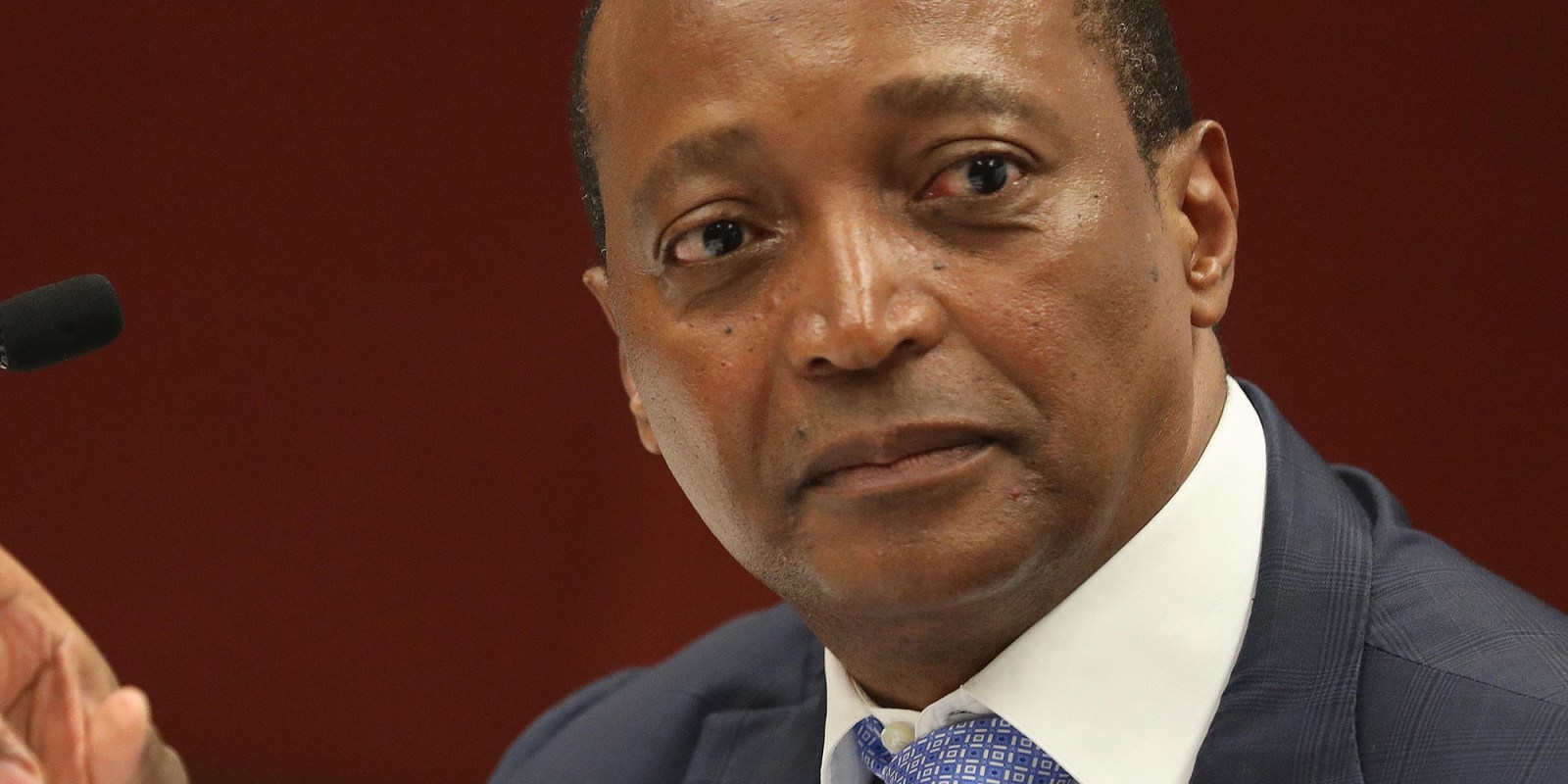 Patrice Motsepe. Before its listing, ARC was 100% owned by Motsepe’s Ubuntu-Botho Investments, which was founded in 2003 as Sanlam’s BEE partner. (Photo: Gallo Images / Sowetan / Thulani Mbele)

ARC seemed a bit puzzled by the pushback from investors, as the basis for calculating the fee hasn’t changed since inception.

Nobody likes fees, particularly those galling management fees that whittle away at investments. But seldom has SA seen the level of outrage that greeted African Rainbow Capital (ARC) Investments’ announcement of a R750-million rights issue last month – a good portion of which was aimed at settling outstanding fees owed to the managers of its investment fund.

While the black-empowered investment group backtracked spectacularly following the outcry, it still highlighted the magnitude of the fees and the lack of value delivered to shareholders since it listed three years ago. The fee will still be paid – from internal cash resources – while the proceeds from the rights issue will now be used to shore up capital, fund existing investments and any new opportunities that crop up. Really, that’s just a juggling act.

A bit of background: ARC was created in 2015 and listed with much fanfare two years later due to the top-notch pedigree of its leadership. Apart from the empowerment credentials of billionaire founder Patrice Motsepe, the company is led by former Sanlam CEO Johan van Zyl and Johan van der Merwe, who previously headed Sanlam Investment Management. Before its listing, it was 100% owned by Motsepe’s Ubuntu-Botho Investments, which was founded in 2003 as Sanlam’s BEE partner.

It listed at R8.50, a level based on the value of its investment portfolio as determined by its directors. The management fees of 1.75% a year plus 16% performance participation are calculated off that. ARC Investments’ medium- to long-term objective is to grow its intrinsic net asset value (INAV) by at least 16% per annum, net of fees. While it grew by just 2.1% to R9.54 in the year to end-June, ARC says that was indicative of and aligned to market performance in the current economic environment.

Still, INAV grew while its share price continued to dwindle. Over the same period it fell by a third and has continued to decline since then.

Almost exactly three years after its listing, ARC announced the rights issue at R2.75 per share.  While it came with the usual – although small – discount to the prevailing share price, it was  68% below the 2017 listing price. In the meantime, the management fee is still calculated on its net asset value (NAV).

ARC seemed a bit puzzled by the pushback from investors as the basis for calculating the fee hasn’t changed since inception. That’s partly why fund managers including 36ONE Asset Management’s Cy Jacobs and Alpha Asset Management’s Keith McLachlan didn’t invest in ARC upfront. The other reason was the valuations of the underlying businesses, which Jacobs says weren’t realistic.

McLachlan says while he and many others pointed out how ridiculous the fee was, others chose to overlook this and still invested.

“Three years later and ARC’s share price is about a quarter of what it listed at, yet its ManCo [management company] fee has risen over this period as its director-valued NAV has risen,” McLachlan says. “In this scenario, it is hard to argue that value has been created for anyone except the insiders and their ManCo.”

Hence, if we assume that the market is correct in its valuation of ARC, then the ManCo’s fees of 1.75% of NAV is actually closer to about 6-7% of ARC’s market cap. And, in this case, ARC is an exceptionally expensive HoldCo.

Most other holding companies don’t have external ManCos that charge fees based on a director-determined NAV. For example, HCI and PSG board and management both hold very large amounts of their own scrip and their cost structure sits within the companies that they are managing. More disturbingly, says McLachlan, ARC’s ManCo fee is determined as a percentage of NAV and the directors are the ones that value the majority of this NAV. This means they have an incentive to inflate the valuation as high as possible as they will literally be charging a percentage of it to shareholders.

“Hence, if we assume that the market is correct in its valuation of ARC, then the ManCo’s fees of 1.75% of NAV is actually closer to about 6-7% of ARC’s market cap. And, in this case, ARC is an exceptionally expensive HoldCo.”

The trouble is, ARC has invested in three major start-ups: digital bank TymeBank, phosphate mining business Kropz and data network company Rain, and it’s difficult to pin a value on them, particularly as investors haven’t had a full line of sight. These early-stage businesses make up about 43% of the value of the portfolio.

It valued its 20.7% stake in Rain at R3.1-billion at the end of June due to a fair value write-up of R479-million, with the increase partly attributed to a surge in online activity during the Covid-19 lockdown. At almost 28% of the fund’s value, Rain is its biggest investment.

That would imply a value north of R14-billion for Rain, and Jacobs believes it’s worth closer to half of that. McLachlan concurs, saying he would be deeply sceptical of this valuation within the current macro and sector context.

“Where is the sustainable profit or cash flow to say it is worth R14-billion?

“It’s been an accepted norm that these investment companies charge fees on their NAV but I think that unfair because it’s misaligned,” says Jacobs.

“Shareholders are getting the value on the basis of the share price, not the NAV.”

I don’t think Remgro or anyone else has ever entered a rights issue at this sort of discount to NAV. It’s like punching you when you’re down.

While other investment companies, including PSG and Remgro, trade at discounts, neither discount is as large as ARC’s, as there is more trust in the value of their assets. Remgro has risen above its historical 12-18% discount, largely because of the unbundling of listed investments such as FirstRand.

“I don’t think Remgro or anyone else has ever entered a rights issue at this sort of discount to NAV,” Jacobs says. “It’s like punching you when you’re down.”

Jacobs believes a fairer comparison is with Brimstone, another black-empowered investment company that also trades at a big discount to its underlying assets that include the likes of reinsurance group Aon Re Africa, property fund Equites, apparel manufacturer House of Monatic, fishing group Oceana and Sea Harvest, and a stake in private hospital group Life Healthcare that it’s busy exiting. It also owns a chunk of shares in the empowerment vehicles of MTN and MultiChoice. For many years Brimstone management actually received fees for shareholders from Nedbank and Old Mutual for services rendered.

Over and above its normal operating costs, there’s no additional charge to investors. Directors are aligned as they rely on dividends as the main source of income together with potential share price appreciation, although that’s been tough to come by in SA of late.

“That’s a fair structure; at least their assets have done well and the maximum running costs you had in any one year is maybe R10-million to R20 million and they have far more assets than ARC but they are not charging on the NAV,” Jacobs says.

ARC is naturally disappointed with the performance of its share price since listing. Apart from the discount that investment holding companies typically trade at, it believes the market is signalling that it doesn’t attribute much value to its investments in the three start-up businesses as they are not, with the exception of Rain, generating positive cash flow.

“We believe this will change over the course of the next 18 months as these businesses expand their client base, gain more operational traction and generate significant revenue and therefore cash flow,” ARC says.

It maintains that the gap between the NAV per share and the ruling share price does not translate into a reduced operating expense. In fact, management may have to work harder to close this discount, so there may very well be increased operating costs to incur.

“The unlisted holdings in ARC… who knows what they’re worth?” says Jacobs.

“If they were worth a lot there would be great cash flows and dividends coming back to shareholders now or in the near future. Time will tell.” DM/BM