Police minister demands an eye for an eye, hoping he himself won’t be blinded 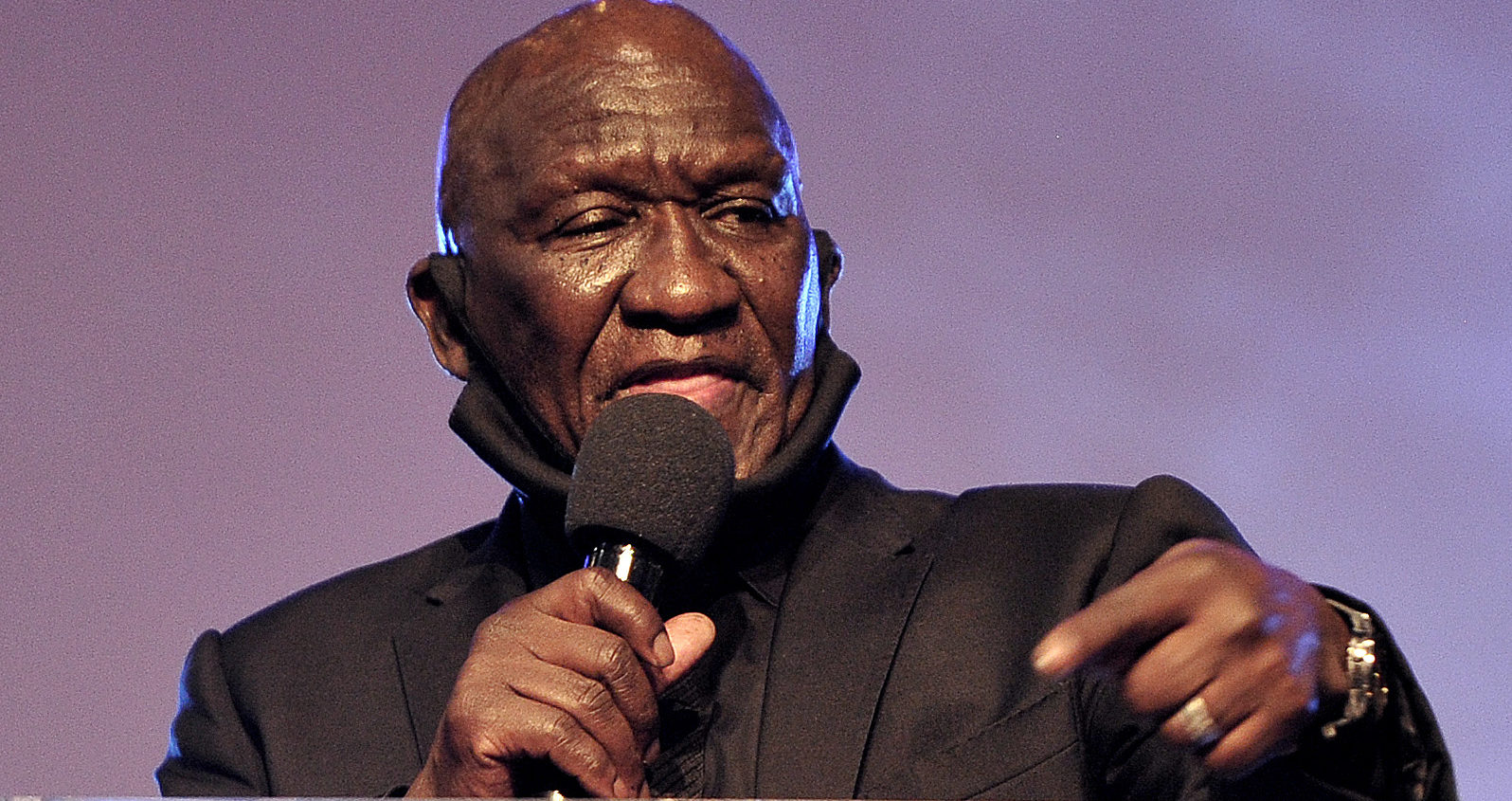 Minister of Police Bheki Cele. The Kinnear case has been elevated to the highest priority category of investigation. (Photo: Noor Slamdien)

The funeral service for Anti-Gang Unit Section Head, Lieutenant-Colonel Charl Kinnear, served not only as a platform for remembrance, but a public firing of the first shot by Bheki Cele in a ‘war’ against criminals and corrupt cops.

The much-decorated and loved Lieutenant-Colonel Charl Kinnear, who was investigating the entanglement of corrupt gun-running cops and criminal syndicates, was assassinated outside his house on 18 September 2020. He was buried on Saturday 3 October.

Minister of Police Bheki Cele is an idiosyncratic funeral orator. He speaks with no notes, from the heart, and the listener must allow the mind to glide like water into the various tributaries that flow from his mind.

One thing he did make clear, however, at the official funeral of Kinnear at the Every Nation Church in Goodwood on Saturday, is that a tipping point had been reached.

The audacious assassination, said Cele, was the equivalent of a declaration of war.

Deputy National Commissioner Bonang Mgwenya represented the SAPS, with most of the police top brass in attendance.

He had heard what had been preached earlier about seeking justice rather than revenge. He read his Bible, said Cele, and he preferred the Old Testament way of doing things — “an eye for an eye, a tooth for a tooth”.

“What luxury do you have to take my eye and you stay with your tooth,” he challenged. “If I have fingers, I will take your eye off… No police is going to rest here until we know what happened to Charl,” Cele promised family, friends and colleagues.

That everyone in this brutal and vicious battle might end up blind, including himself, is a risk Cele is prepared to take.

Cele directly asked Western Cape Provincial Commissioner Yolisa Matakata to launch a “full investigation” not only into Kinnear’s death, but the ongoing claims of deep corruption in the Western Cape SAPS.

“Heads must roll. I agree. Starting with Cele’s head. Nothing should spare my own head,” said Cele.

Corrupt officers who colluded with gangsters had a choice — “be here, or be there” adding, “if you join the war, let it be”.

But Cele must surely understand that it is the job of the Independent Police Investigative Directorate (IPID) to investigate the serious charges Kinnear made in a more than 50-page complaint he sent to the directorate in 2019.

The SAPS cannot investigate the SAPS — particularly not in a matter where so many members have been implicated and compromised by the murdered detective.

IPID, under Robert McBride, succeeded in pursuing many cases against corrupt cops. These are cases which are only now making their way to the courts. The pushback McBride faced was concerted, underhanded and desperate.

But McBride kept chipping away, even under the extraordinary added pressure of being illegally suspended by Police Minister Nathi Nhleko, reappointed and then booted out by Cele himself.

It was Cele who engineered McBride’s exit from IPID. Cele and ANC members of the police portfolio committee viciously turned on the IPID executive director.

The decision by McBride to accept a “settlement” in February 2019 has been challenged in the SCA by the Helen Suzman Foundation and will be heard on 6 November 2020.

McBride was also investigating the matter of the alleged illegal procurement of a listening device – known as a grabber — by top SAPS members, including Crime Intelligence and politically connected individuals, at the inflated price of R45-million before the ANC’s elective conference in Nasrec in 2017.

The political stakes in uncovering the real extent of the rot and the horror are high.

Cele is as idiosyncratic a minister as he is a speaker and his future role in saving the SAPS from itself is not clear.

The funeral of Kinnear gave those who attended and those who watched it streamed on social media a rare insight into a side of the SAPS that seldom makes headlines or reaches the media.

So much so that Cele himself remarked:

“I have never heard so much talk about the police in South Africa.”

And it was about the best of South African policing… not the worst.

It was heartening to hear SAPS Deputy National Commissioner Mgwenya deliver a no-holds-barred tribute “to one of our most decorated officers and detectives in our organisation”.

Kinnear’s murder, she said, had left a void “not only in the Western Cape, but the whole country”. The SAPS had been robbed of “vast knowledge and skills that can never be replaced”.

“Everything we stand for,” said Mgwenya, “starts with public safety.”

“The way in which he [Kinnear] died is a dishonour to the life he lived. The civility of our society balances on a knife’s edge. Our brave SAPS members are just ordinary people, men and women who believe in making this a safer, better world.”

Those who committed “this evil deed”, she said, would feel the “might of the law”.

Human Rights Commissioner Chris Nissen revealed that Kinnear had been the investigating officer in a matter involving the murder of two of Nissen’s brothers.

“He brought justice to many people and the cases that he investigated brought comfort to those who lost brothers, sisters on the Cape Flats,” said Nissen.

“We live in a dysfunctional society. Everyone saw, but no one wants to talk. The time has come to stand up and speak out. Tomorrow it will happen to you.”

Nissen called for justice and told those who had plotted and executed the murder of Kinnear that they could run, but they could not hide.

All agreed Kinnear’s deep roots in his community and his dedication to his oath of office would remain as a lodestar for those left behind to fight another ghastly day on the mean, crime-ridden streets of South Africa.

Cele said the fightback against crime and criminality in the SAPS had now begun; “this is our last mile, or it could be the first mile”.

Gangsters and criminals in South Africa, said the Minister of Police, were “an unelected government” and “we cannot co-govern with crime”.

Kinnear represented one of the best on the thin blue line.

It is a line that those who serve with honour keep in order to prevent society from sliding into violent chaos.

The thin blue line in South Africa is indeed thin, if not utterly ragged, and now perhaps all the weaker for Kinnear having been so violently removed from its ranks. DM