Charl Kinnear killing: ‘There is a war where we are going to get bodies,’ warns Cele 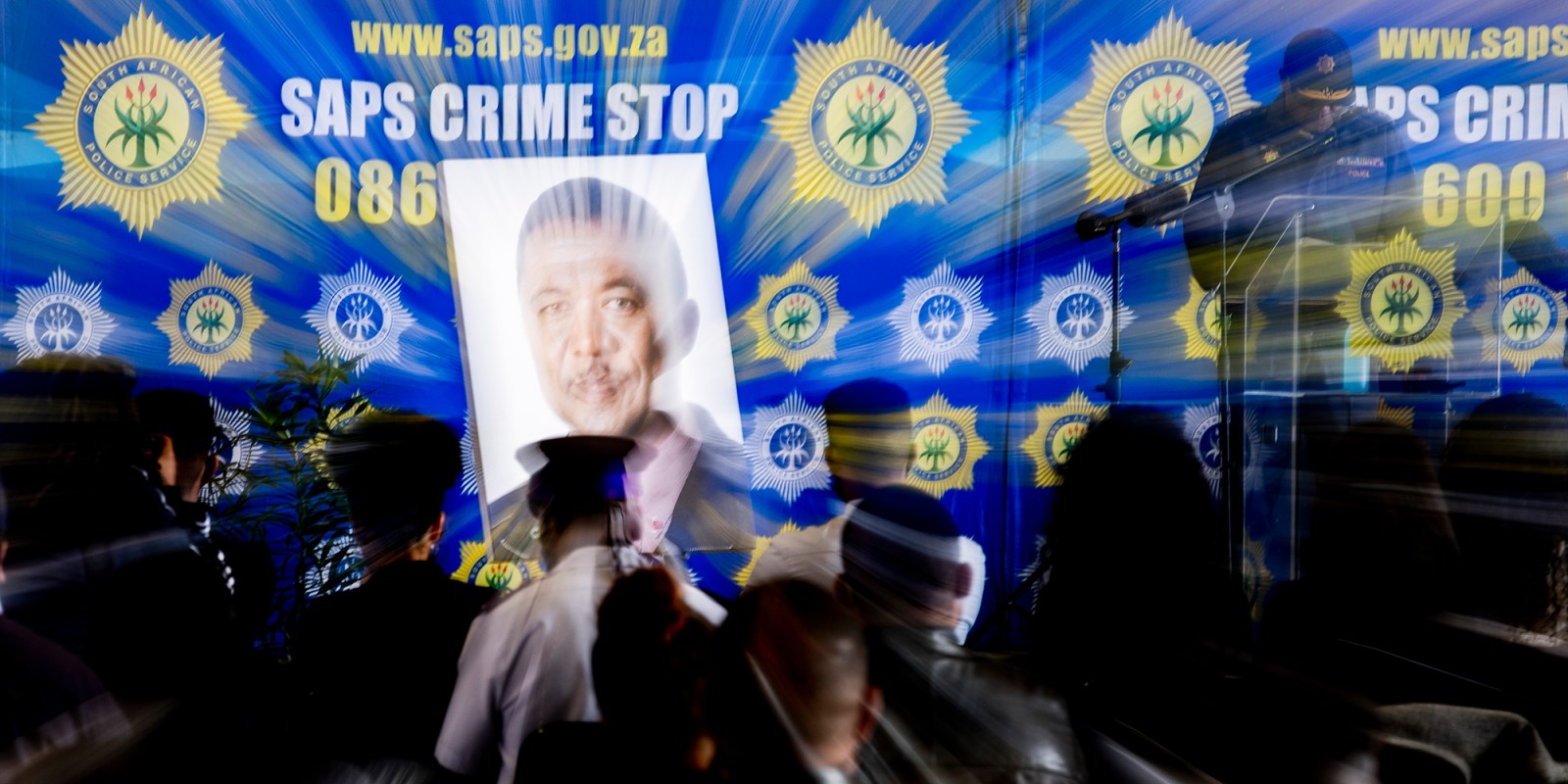 Investigators at Kinnear’s funeral confirmed to Maverick Citizen that a person of interest had been identified and police nationwide were on the hunt for the individual who is an alleged underworld hitman.

They will need to unravel the extent to which police officers colluded with underworld figures and criminal kingpins, some of whom are in prison and who appear to still be issuing orders.

A team incorporating all of South Africa’s intelligence agencies needs to conduct interviews, check databases of known underworld figures and relentlessly follow up every lead, no matter how small or apparently trivial.

The Kinnear case has been elevated to the highest priority category of investigation.

This is what Police Minister Bheki Cele has demanded and it is an order that was supported at an emotional funeral service held for Kinnear at Every Nation Church in Goodwood, Cape Town, on Saturday 3 October.

Kinnear died a national hero and this was exemplified by the national flag draped across his coffin and the police special service held in his honour.

A possible starting point for investigators would be to re-examine events that unfolded in 2018 when a Gauteng woman, whose husband was allegedly killed by hitmen from the Gauteng mafia, contacted Kinnear.

The woman is believed to have informed Kinnear that her husband was involved in a massive gun racket involving army officials at an infantry base, corrupt police officers, bikers and hitmen who colluded with a nationwide syndicate.

This is one element that set in motion the gun-licensing racket investigation that resulted in the arrests of several Gauteng police officers, along with alleged underworld kingpin Nafiz Modack on 16 June 2020.

On Saturday, investigators at the funeral confirmed to Maverick Citizen that a person of interest had been identified and police nationwide were on the hunt for the individual, who is an alleged underworld hitman.

Cele’s spokesperson, Lirandzu Themba, confirmed that three people had been taken in for questioning but were released later.

A Maverick Citizen investigation has revealed that the person of interest was seen twice outside the Cape Town Magistrates’ Court during hearings attended by Kinnear.

The time has arrived that politics is put aside and we deal with the welfare of the people. You see these criminals, they don’t want any political cards and they have declared war against humanity and human beings. I love to read my Bible and the Old Testament, and believe in an eye for an eye.

The arrest of this person of interest might lead to the identities of those behind the plot that claimed the life of Kinnear on Friday 18 September in front of his house at 10 Gearing Road, Bishop Lavis, Cape Town.

He was shot at point-blank range by a gunman who casually strolled towards his car at around 3pm with the clear intention of killing Kinnear.

Killian faces a charge of murder, conspiracy to commit murder and the illegal interception of communication. The State will argue he was part of an orchestrated plot.

At Kinnear’s funeral, Cele underlined that murderers and “bad guys” had operated with relative impunity for considerable time. This reign of terror and corruption could not be allowed to become a permanent feature and the SAPS had to get rid of the rotten apples in its ranks.

“The time has arrived that politics is put aside and we deal with the welfare of the people. You see these criminals, they don’t want any political cards and they have declared war against humanity and human beings. I love to read my Bible and the Old Testament, and believe in an eye for an eye.

“Therefore, no member of the police here is going to rest until we know what happened. Be assured that no criminal is going to kill our police and go and sleep in his house. There is a war where we are going to get bodies, and this [referring to Kinnear’s coffin] is evidence,” the minister said.

Cele also touched on the issue of internal police squabbles in the Western Cape and echoed earlier sentiments that a full investigation was needed and that “heads would roll”.

We know Kinnear was involved not only in  dealing with the criminals but also dealing with our own criminality. We really have to move the bar up among and between ourselves. It’s painful and it’s going to be painful.

“We cannot allow men and women in blue to be butchered and don’t know what happened,” said Cele.

To corrupt police officers, Cele said: “Men and women in blue who join them are criminals. There are no criminal police, you are cut off. If you decide to join them let all of us know if you plan to join the war that is declared against us.

“We know Kinnear was involved not only in  dealing with the criminals but also dealing with our own criminality. We really have to move the bar up among and between ourselves. It’s painful and it’s going to be painful.”

In his sermon, Dr Llewellyn MacMaster said, “Kinnear was tempted. I’m sure he was approached like any good policemen by people to follow them. But he listened to the text that sin is crouching at your door but you must master it. The information that came through to us clearly indicates that some of Charl’s brothers did not heed the warning… They have completely missed the mark and have not done what is right.

MacMaster urged corrupt officers with their hands “full of blood” to “wash yourself, make yourself clean”.

Kinnear’s son Casleigh said: “My dad woke every morning after 4am when some of you were still sleeping. My dad would sometimes come home at midnight and even later and type his dockets till 2.30am, and at 4.30am he was ready to leave. That was the kind of commitment and dedication my dad had. My dad believed in his values.

“We as a family believe the passing of my dad will be the birth of a new generation of police officers. Not the lazy ones who sit in their office.”

The saddest moment of the funeral was when everyone left the graveside and a sobbing Nicolette Kinnear stayed to say her final farewell to her childhood sweetheart and the husband she had been married to for 26 years.

On Monday 5 October Killian will be back in the Bishop Lavis Magistrates’ Court. His defence lawyer is ready to bring a bail application, which the State will vehemently oppose. DM/MC