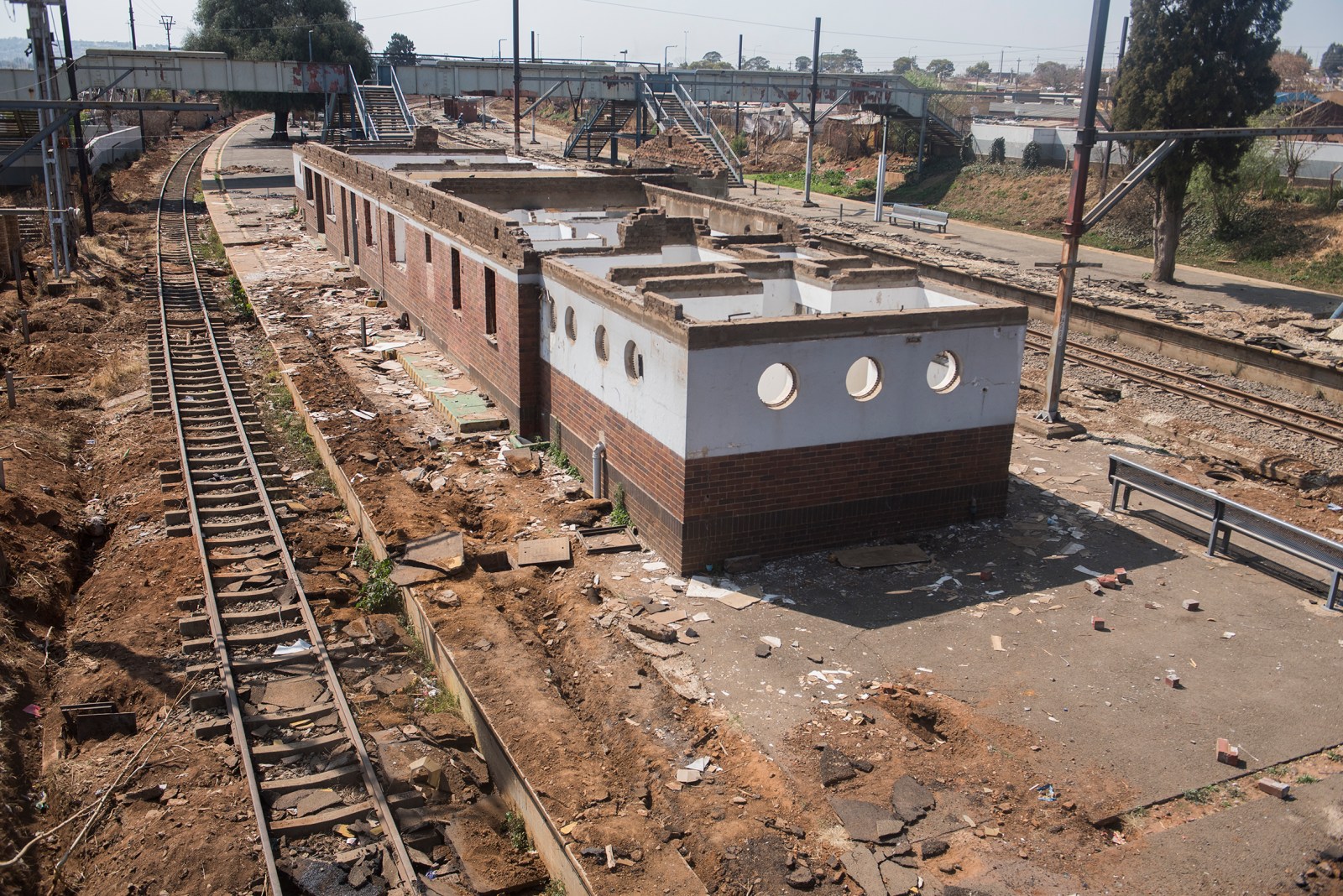 A barren Kliptown train station in Soweto after it was stripped bare by thieves. (Photo: Shiraaz Mohamed)

Over months of lockdown with little or no security at depots and train stations because of contract cancellation, is there anything left at Prasa to fix?

The Passenger Rail Agency of South Africa (Prasa) was in a crisis long before the national lockdown in March 2020.

Vandalism and arson had cost Prasa almost a billion rand in damaged infrastructure between 2017 and 2019 – during a time when Prasa had contracted out its security services.

“Even when there was security, there was still vandalism,” Transport Minister Fikile Mbalula told journalists at a press briefing last month.

But this rationalisation cannot hide the wanton destruction that the termination of security services by Prasa in April 2020 facilitated during the lockdown.

Click on the train icons in the map below to see some of the damage perpetrated before and during the lockdown.

After the rail authority failed to award three prior security contracts, it announced last month that it would insource its security, adding 3,100 protection officers for a total force of 5,600 to protect passengers and existing Prasa infrastructure, including 2,280km of rail.

Mbalula explained that Prasa had decided against contracting out security in favour of employing people “accountable to Prasa”.

Prasa had the same security contractors since its launch in 2009.

In the Western Cape, Judge John Hlophe ruled in favour of the contractors and ordered Prasa to continue to use their services on the original contracted terms, pending the completion and implementation of a security tender or adequate contingency plan.

The court expected Prasa to implement the plan by February 2020, but this was delayed to September.

Mbalula has since tried to rope in the South African Police Services, the Hawks, the National Prosecuting Authority, Metro Police, and the Railway Safety Regulator to help deliver on Prasa’s “beefed-up” security plan.

In Gauteng, security companies also challenged the November 2019 contract terminations, but according to Prasa’s acting security head, retired Brigadier-General Tebogo Rakau, the judge in that case granted permission for the termination of the contracts on one month’s notice.

Accordingly, contracts in Gauteng were terminated in March 2020 and ran out at the end of April.

The conflict between the judgments has added to the confusion.

“From the end of October [2019] up until today, no private security contractors have worked at Prasa,” she alleged.

A report in the Cape Times quoted Adiel de Bruyns, managing director of one of the companies, as saying, “No explanation was given as to what has come of the 2019 tender… The entire procurement process is being conducted in under two weeks… This process is flawed.”

The court ruled in favour of the security companies on 7 August and said Judge Hlope’s order was applicable nationally.

“Prasa could not go out to tender until it had satisfied the conditions of Judge Hlope’s order,” Rakau said.

Prasa spokesperson Makhosini Mgitywa explained: “[Security] contracts were extended to 30 April where a [memorandum of understanding was agreed] with the police to look after the railway network while Prasa worked on a contingency plan. However, SAPS was reprioritised during lockdown, leaving Prasa vulnerable.”

Prasa had also struggled to pay its existing security contractors because of its budget deficit, he said.

Rakau said Prasa was in the process of meeting its deadline for a full security complement by the end of October.

Prasa was meant to transform the way South Africans travel. Instead, commuters using its Metrorail service have dwindled from 543 million paying passengers a year in 2013 to a mere 147 million passengers in 2019. 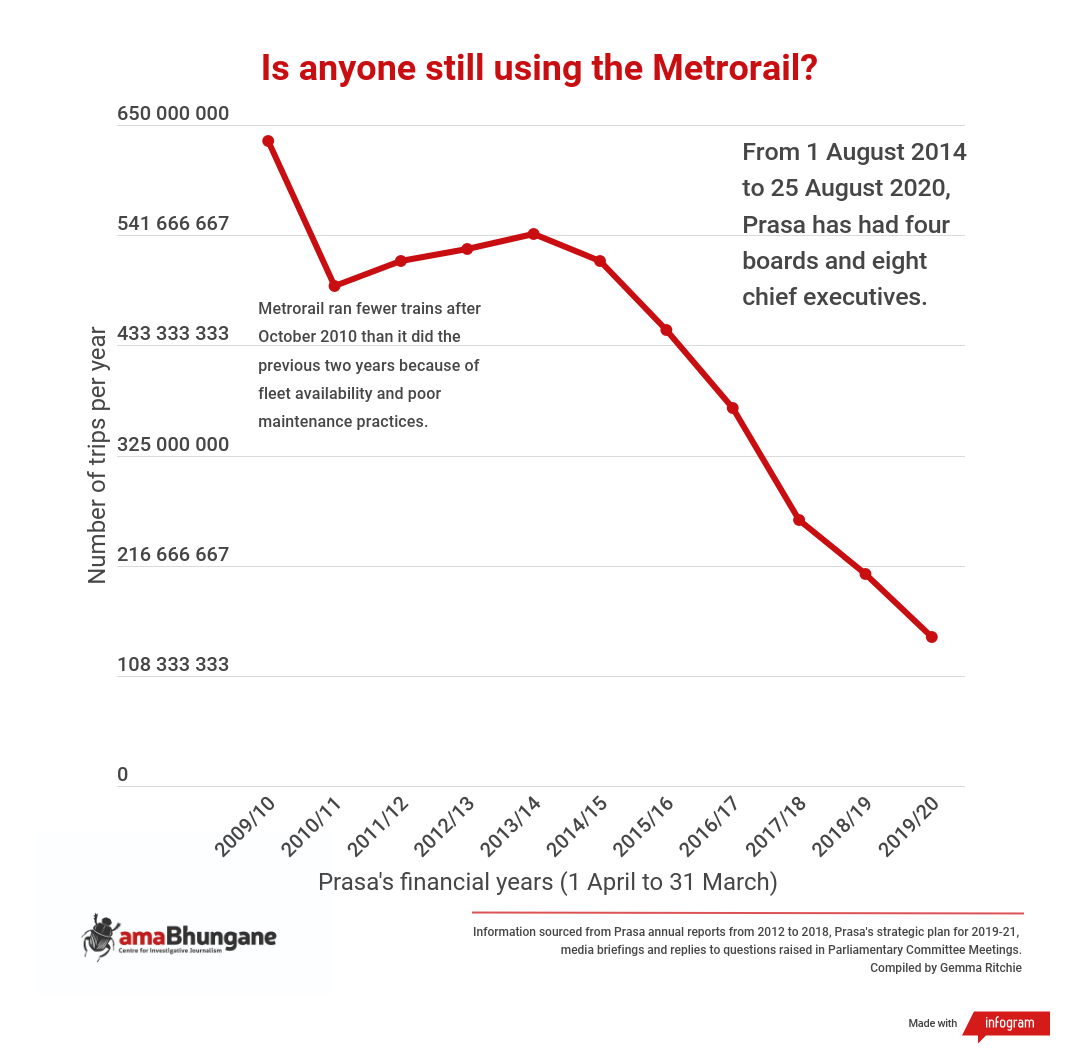 The lack of security at Prasa and the wanton destruction of its infrastructure have forced millions of commuters to dig into their purses to pay for taxi trips 500% more expensive.

“There is no political will to make good on the promises at Prasa,” said Carsten. “Each new broom sweeps clean and presents a new plan, but the plans never reach implementation.” DM

See Daily Maverick’s special report on the looting of the rail network here: