Mkhwebane vs Gordhan: The gloves are off in the latest legal wrangle over Ivan Pillay’s early retirement payment 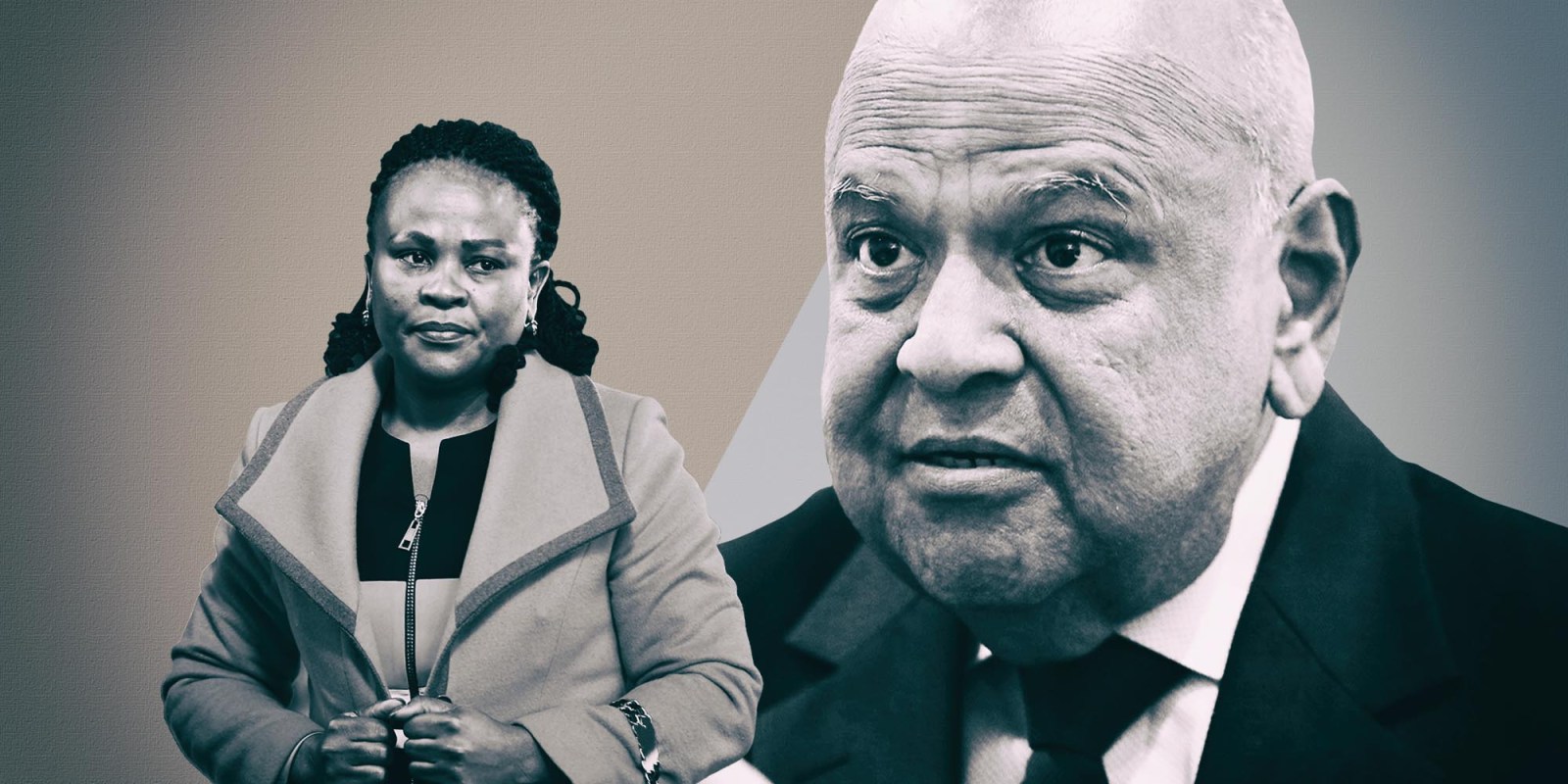 It is a battle that has come a long way. From 2016, to be precise, the year Busisiwe Mkhwebane was appointed to the Office of the Public Protector. And this time it’s personal, it’s political, and a fight to the last legal barricade.

Its origins and development are contained in screeds that have been written, towers of legal files thumbed, court judgments handed down and endless records of commissions that have sat for hours listening to testimony.

In the arena are two public officials fighting for their political life and reputation – Minister of Public Enterprises Pravin Gordhan and Public Protector Busisiwe Mkhwebane – and it is a fight to the last legal barricade.

In 2016, more than five years after former SARS Deputy Commissioner Ivan Pillay successfully applied for an early pension payout in 2009, an “anonymous” complaint plopped into Mkhwebane’s inbox. And so it began.

Although the prescribed two years for lodging a complaint with the Public Protector had expired, Mkhwebane has argued consistently that “special circumstances” existed and that “the harm allegedly caused is continuous and still present”.

The battle continued this week from 30 September to 2 October 2020 in the North Gauteng High Court, where Gordhan and the Public Protector faced off in round number 8 765 or 9 876.

The all-star political heavyweight cast are familiar regulars. There is leading man Gordhan, of course, the Office of the Public Protector, Mkhwebane (as herself), the President of the Republic of South Africa, current Commissioner of SARS, former Deputy Commissioner Ivan Pillay and former Commissioner Oupa Magashula.

This time, apart from opposing Gordhan’s application to have her report and remedial action into Pillay’s retirement set aside, Mkhwebane has applied for Gordhan to face a R40 000 fine or time in the slammer for “insulting her”. In other words, this time it is personal.

Punishing Gordhan would prevent any further potential attack on her office by “other persons found to be on the wrong side of the law by the Public Protector”, she added.

What irked the Public Protector is that Gordhan, in his application, had accused Mkhwebane of releasing her report to score political points. Advocate Wim Trengove, for Gordhan, set out how on 24 May 2019, “one business day” after receiving his submissions, “and the day before the inauguration of President Cyril Ramaphosa as Head of State”, the Public Protector had released her report into Pillay’s pension payout.

“On the same day, 24 May 2019, the Public Protector released other reports, notably clearing the Deputy President, Mr David Mabuza, and prompting speculation that she had timed the release of these reports so as to influence the Cabinet selection process,” argued Trengove.

The “political stakes” were subsequently confirmed “when opposition party the Economic Freedom Fighters immediately issued a statement claiming that Minister Gordhan was somehow unsuitable for reappointment to Cabinet because of the report”, said Trengove.

In her papers Mkhwebane said although “examples of unacceptable conduct and language” adopted by Gordhan and other respondents in their papers “are too numerous to list exhaustively”, she highlighted one. This was Gordhan’s insult, said Mkhwebane, that she had enabled “a renewal of the ongoing political campaign” against him by “opponents of State Capture and defenders of corruption”.

In doing so Gordhan had suggested that Mkhwebane was “guilty of the crime of treason, punishable by death in some countries”. “A bigger insult against the Public Protector is very hard to imagine.”

That Gordhan had included in his court papers various references to scathing court judgments against the Public Protector also clearly enraged Mkhwebane. She asked for all comments by judges in these matters to be struck from the current record.

The inclusion of “long and irrelevant passages from unrelated court decisions” [read judicial tongue-lashings], said the Public Protector, was deployed to “demonstrate, inter alia, my ‘stunning incompetence’ in the performance of my duties”. Judgments of “other courts”, she said, constituted mere “opinions”, some of which, she reminded all, were still clogging up the appeal courts.

When it came to Gordhan’s application seeking personal costs against Mkhwebane on a punitive scale, the Public Protector reached for Chief Justice Mogoeng Mogoeng’s minority judgment in the Public Protector vs The South African Reserve Bank. The majority decision in that matter, penned by Justice Sisi Khampepe, held that there was no sound basis to justify an interference with the high court’s decision to award personal and punitive costs against Mkhwebane.

Mogoeng, on the other hand, asserted that vigilance was needed in making personal cost grants against state functionaries that might have a “chilling effect” on their work. “To err is human,” Mogoeng quoted the old proverb.

Gordhan has faced down a Directorate for Priority Crime Investigation led by Berning Ntlemeza and an NPA headed by Nomgcobo Jiba and Shaun Abrahams. The Pillay and the “rogue unit” matter has been unpacked at the Nugent Commission and various other court actions, and has been endlessly recycled. And here we are. Years later inching towards the next legal barricade.

The court had not handed down judgment in the latest matter at the time of writing. Whatever the outcome, for the Public Protector, the battle is not over, as her next round might be facing a parliamentary inquiry into her fitness to hold office. As for Gordhan, he lives to fight another day. DM168