Garden reveals secret sculptures and a chef with a vision 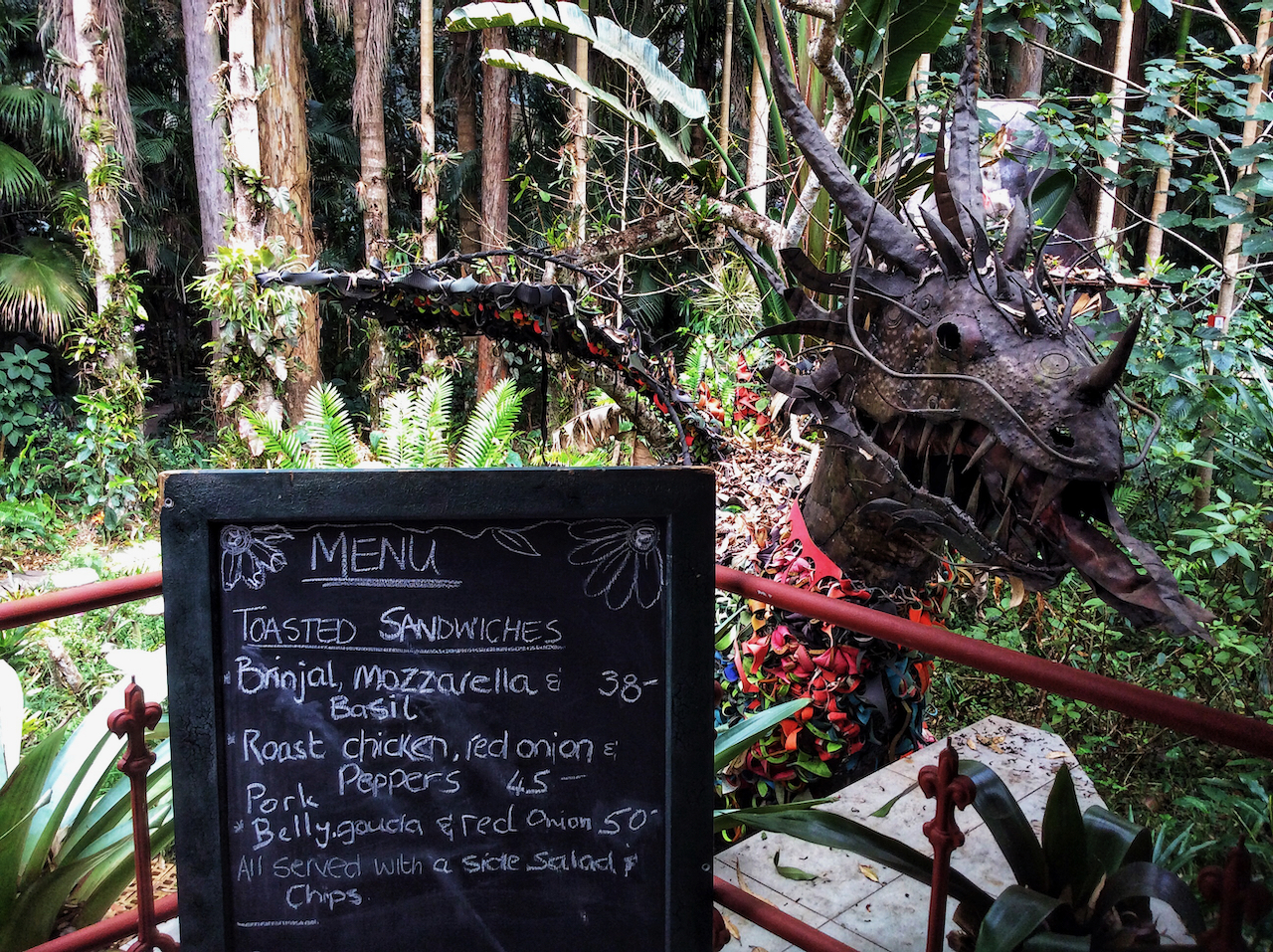 Keeping a dragon’s eye on the menu. (Photo: Wanda Hennig)

A fantastical garden. A café as its beating heart. A gallery home for Durban sculptor Andries Botha’s 40 years of art. Be gobsmacked.

And on the seventh day…

Didn’t I read a story somewhere, sometime, that someone, on the seventh day, after setting up something pretty significant, rested?

I can tell you who it wasn’t. Hein Lottering, proprietor-chef at the Pavilion Café, who is dishing up light lunches, cakes and coffee and overseeing the phenomenal adventure that is a work in progress at the AmmaZulu Gardens and Sculpture Precinct. Quite a mouthful, to use the full, formal name.

“It’s my seventh day open,” he tells us when – under the other-worldly gaze of a hollow-eyed artfully recycled dragon – we settled down to bite into a simple, delicious, beautifully prepared pork belly, Gouda and red onion sandwich (my friend’s) and an equally simple, delicious, beautifully prepared brinjal, mozzarella and basil sandwich (my choice). In each case served with pretty decent chips and a salad garnish.

The first three days he opened (Friday to Sunday from 10am till 3pm at this point), “I had no idea if there would be any customers so I was doing everything myself. I burned the sandwiches. The chips were soggy. But can you believe it, nobody complained.”

Yes, I can believe it. They were, I expect, like my friend, Pieter Scholtz, once-upon-a-time drama professor at University of KwaZulu-Natal (UKZN) and now, among other things, the curator of a monthly soirée held, these Covid-19 days, outdoors, with social distancing and masks, in the garden at Durban’s St Clements restaurant, “gobsmacked” and too busy saying “wow”. Both these words being direct quotes, each uttered with expletive-like intensity and multiple times.

On this, the seventh day, given that numbers have exceeded expectations, Lottering has enlarged his team of helpers. Up from one assistant on day four to three on days six and seven.

He reckons the café will be “the beating heart” at the AmmaZulu sculpture garden, a vast and “sprawling abundance of plants, artifacts and objects” and a “wild wonderland”, to quote the garden’s creator, Peter Amm.

Amm is also founder-creator, in a collaboration with fellow-architect Kevin MacGarry who actualised Amm’s vision, of the just as fantastical and wildly imaginative art-themed Ammazulu African Palace, in another part of Kloof, which runs as a boutique hotel and events venue overlooking Krantzkloof Nature Reserve.

The sculpture garden property is where Amm grew up. What he has set up as a non-profit trust (hence the long and formal official name) so it can be an ongoing, permanent destination, a public facility to be shared now while he is still involved and working in the garden every day. Also when he is long gone, aka in perpetuity.

This garden is where his passion was spawned for orchids and cycads and ferns and nature. And where he first heeded the advice of his late dad: to never throw anything away as it might have a use later.

Which counsel is expressed in many of the fanciful installations and constructions created by Amm, interspersed along meandering garden paths with purchased work, much of it by South African and Zimbabwean artists, which reveal themselves from amidst the abundance of sub-tropical, tropical, exotic and indigenous plant life.

The AmmaZulu sculpture garden, besides being a whimsical surprise-filled and art-intense wonderland, is also the new permanent home of the sculpture collection spanning 40 years of acclaimed South African artist Andries Botha, who also has his studio here and who has been the collaborating presence and co-visionary with Amm on the creation of the sculpture precinct.

Four of his elephants, representing his Human Elephant Foundation project and including Nomkhubulwane, the elephant sculpture made using recycled tyres and named by the late Dr Ian Player, which previously toured North America and was exhibited in The Hague, will welcome visitors in the courtyard near the café.

Don’t be surprised if you’re reading for the first time here about the sculpture garden, the Pavilion Café, Botha’s curated exhibition, the elephants in the courtyard – plus a cluster of soaring light-infused creative exhibition spaces where shows will be held and sculpture residency artists’ work displayed.

The official opening will be soon. By then the numbered plants and installations – around 150 and counting – should all be curated into an app and the WiFi installed so visitors can walk the paths and virtually engage with what they’re seeing.

Give it a couple of years, if that, and if all goes to plan, expect this to be a destination for art, artists, nature lovers, locals and tourists. And, if Lottering has anything to do with it, a culinary destination of note.

He intends to keep things simple for the first three months. Stick to sandwiches. Introduce home-made cakes. Once Lottering has established his core clientele, he will introduce brunches. Later will come a craft brewery, a distillery and an artisan bakery. This is the vision.

Lottering’s roots are in what he calls “anything Camdeboo”. He grew up in the Karoo. His gran was an enthusiastic cook, lamb not surprisingly being her speciality. They lived in Graaff-Reinet. “I worked at the Drostdy Hotel through high school. They sent me to chef’s school.” What at the time was Wits Technikon.

He completed his diploma, decided he wanted to be an actor, so moved to Cape Town and did a performance diploma and a BA drama. Then worked in the city for a couple of years, mainly in TV and doing a lot of German and Dutch commercials.

They were heady days. “Mandela had just been released. There was this great feeling of anticipation; of freedom. This amazing energy and volatility, like anything was possible.” It seemed it was. But then, “I had this terrible quad-bike accident.”

He broke his back. His stage work had been physical. “I had this long recovery and couldn’t do any of that anymore.” He turned to directing “because I could sit in a chair”.

Then he moved to Joburg. On the food front he ran a lunchtime café for a couple of years but mainly worked in TV as a producer/director.

In this capacity with a Scandinavian media company he worked all over Africa including Accra in Ghana where he was based when his second physical disaster struck. In 2013, he fell off a scaffold and crushed his hip.

The life reassessment and readjustment that followed saw him move to the KZN Midlands, where he started farming organic chickens and vegetables.

Lottering moved to the Kloof property in February. The plan was to open as soon as possible. Then Covid-19 came. “Had we opened when we should have, we’d not have been nearly as well prepared. We spent the whole of lockdown working on the restaurant, the studios and the garden.”

A work in progress, yes. And much to do. But it so happened that I was there twice during the latter part of last year, one of those times shown around by Botha after sitting in on a meeting with Amm where plans were being bounced around and the vision taking shape. Whew. Looking at the evolution, a quote from architect Frank Lloyd Wright seems apt: “I know the price of success: dedication, hard work and an unremitting devotion to the things you want to see happen.”

Why I was there this time, on what happened to be Lottering’s seventh café day, with Pieter Scholtz, was to show Scholtz the garden so he could ask Botha to come share stories about it at a soirée. Scholtz was blown away. Botha agreed.

But no rest anticipated for Lottering. And seeing he worked such culinary miracles the first seven days, he may as well keep up the pace. Turn water into wine and loaves into fishes, or something like that, so we can all go eat, drink and be gobsmacked. DM/TGIFood