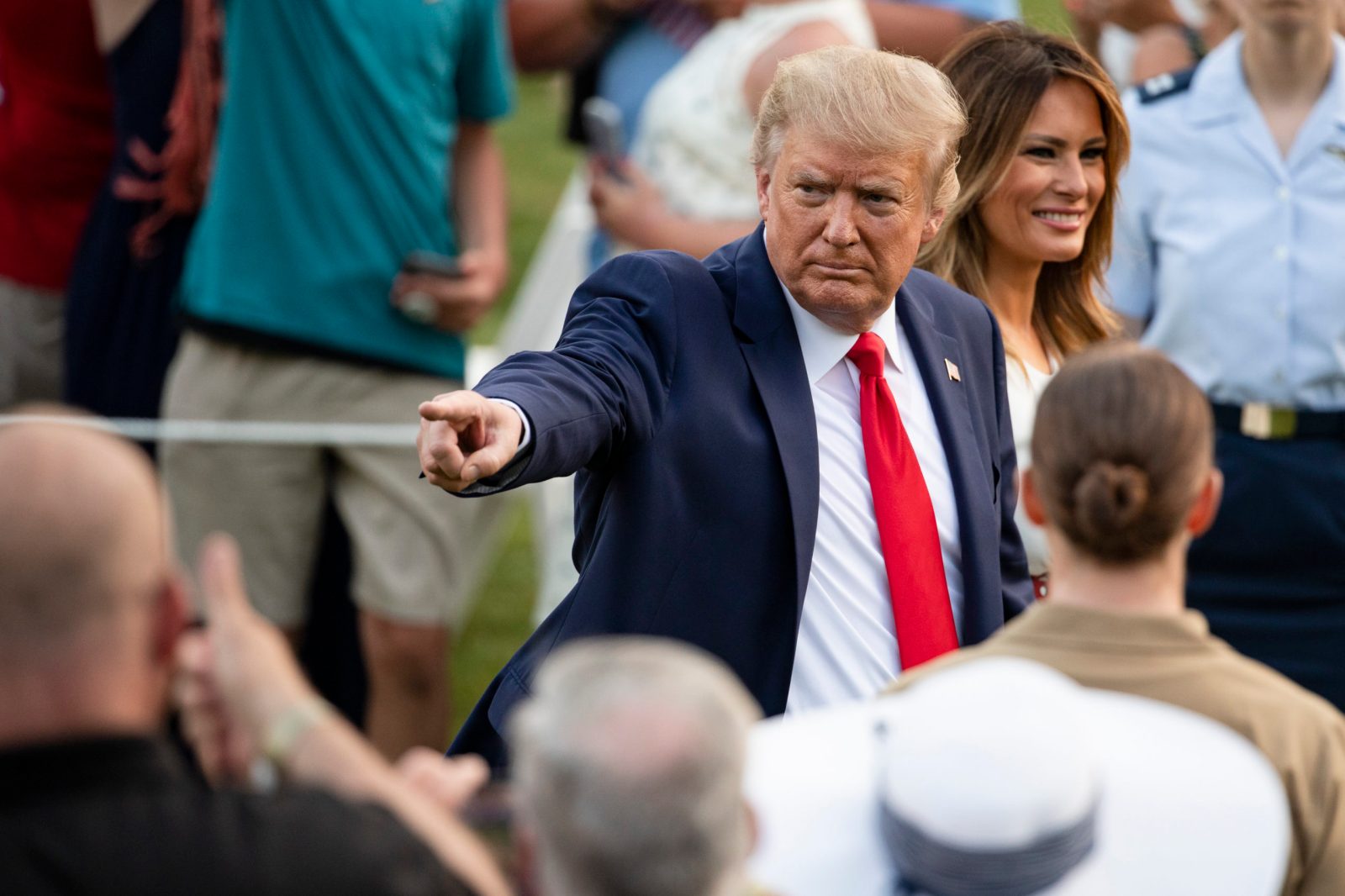 US President Donald Trump and First Lady Melania Trump attend the Fourth of July 'Salute to America' event in Washington, D.C., USA, 04 July 2020. Trump pushed forward with his planned Fourth of July celebration, even as many officials urged the public to stay home and avoid gathering in large crowds due to the ongoing Coronavirus pandemic. EPA-EFE/SAMUEL CORUM

President Donald Trump, who minimised the threat of the coronavirus pandemic for months, said on Friday that he and his wife Melania had tested positive for Covid-19 and were going into quarantine, upending the race for the White House.

“We will begin our quarantine and recovery process immediately. We will get through this TOGETHER!” the president said in a tweet early on Friday morning.

Trump, 74, is at high risk with the deadly virus both because of his age and because he is considered overweight. He has remained in good health during his time in office but is not known to exercise regularly or to follow a healthy diet.

Trump minimised the seriousness of the pandemic in its early stages and has repeatedly predicted it would go away. He rarely wears a mask and criticizes people, including Democratic presidential nominee Joe Biden, who do.

More than 200,000 people have died from Covid-19, the disease caused by the virus, in the United States alone, with the elderly and those with pre-existing conditions especially hard hit.

Trump, a Republican, urged U.S. states to re-open shuttered economies even as the number of cases continued to soar and knocked Democratic governors for putting tough measures into place to bring the virus under control.

Trump’s positive test means that others at the highest levels of the U.S. government may have been exposed and have to quarantine, too.

A White House official said contact tracing was under way.

Trump’s physician, Sean Conley, said he expected the president to carry out his duties “without disruption” while he recovers.

“The President and First Lady are both well at this time, and they plan to remain at home within the White House during their convalescence,” Conley wrote in a memo that was distributed to the press.

Biden has criticised Trump sharply for his response to the pandemic, while the president has praised himself and his team.

Trump has held indoor and outdoor rallies with thousands of people in recent weeks in the run-up to the Nov. 3 election, despite warnings from public health professionals against having events with large crowds.

On Thursday night, shortly after the president said the pandemic’s end was in sight, news broke that Hope Hicks, a top adviser and trusted aide, had tested positive for the virus. Hicks traveled with the president on Air Force One on Tuesday and Wednesday.

CHANGE IN THE RACE

The White House issued a new schedule for Trump’s activities on Friday that did not include a planned trip to Florida. Biden is scheduled to campaign in Michigan on Friday. Both states are swing states that could help decide the U.S. election.

The president’s condition is likely to bring the pandemic back to centre stage in the race, after the death of Supreme Court Justice Ruth Bader Ginsburg and Trump’s subsequent nomination of Judge Amy Coney Barrett to fill her seat, developments which had shifted the campaign’s emphasis.

Trump, who has been criticised for questioning the efficacy of wearing a face covering, produced a mask from his pocket in the first presidential debate on Tuesday and said, “I wear masks when needed. When needed, I wear masks.”

He then ridiculed Biden for putting one on regularly: “I don’t wear masks like him. Every time you see him, he’s got a mask. He could be speaking 200 feet away from them and he shows up with the biggest mask I’ve ever seen.”

Health professionals say that face coverings are key to preventing the virus from spreading.

Trump has held regular rallies around the country to drum up enthusiasm for his candidacy against the former vice president, who has eschewed campaign events with large numbers of people. Trump has taken pride in his big campaign rallies, with crowds of people who do not wear masks or maintain social distance.

He is likely to chafe at having to remain at home with only weeks to go before the election.

Futures for the S&P 500 fell 1.8% in Asian trading after the news of Trump’s positive test, extending earlier losses, while barometers of risk sentiment, such as the Australian dollar and Treasury yields, dipped.

“Trump has been trailing behind Biden and he has clearly failed to narrow the gap after the first debate … I suspect markets will lean towards the view that Biden will likely win the election,” said Naoya Oshikubo, senior economist at Sumitomo Mitsui Trust Asset Management. “What I am worried is that he will become even more aggressive against China after he caught the virus himself.”

British Prime Minister Boris Johnson kept working in isolation for a little over a week after testing positive in late March, but then fell gravely ill and was rushed into intensive care. He spent several weeks recovering before returning to work.

Canadian Prime Minister Justin Trudeau went into quarantine in March after his wife was diagnosed with the coronavirus. Brazil’s President Jair Bolsonaro called it a “little flu” after being infected in July. DM