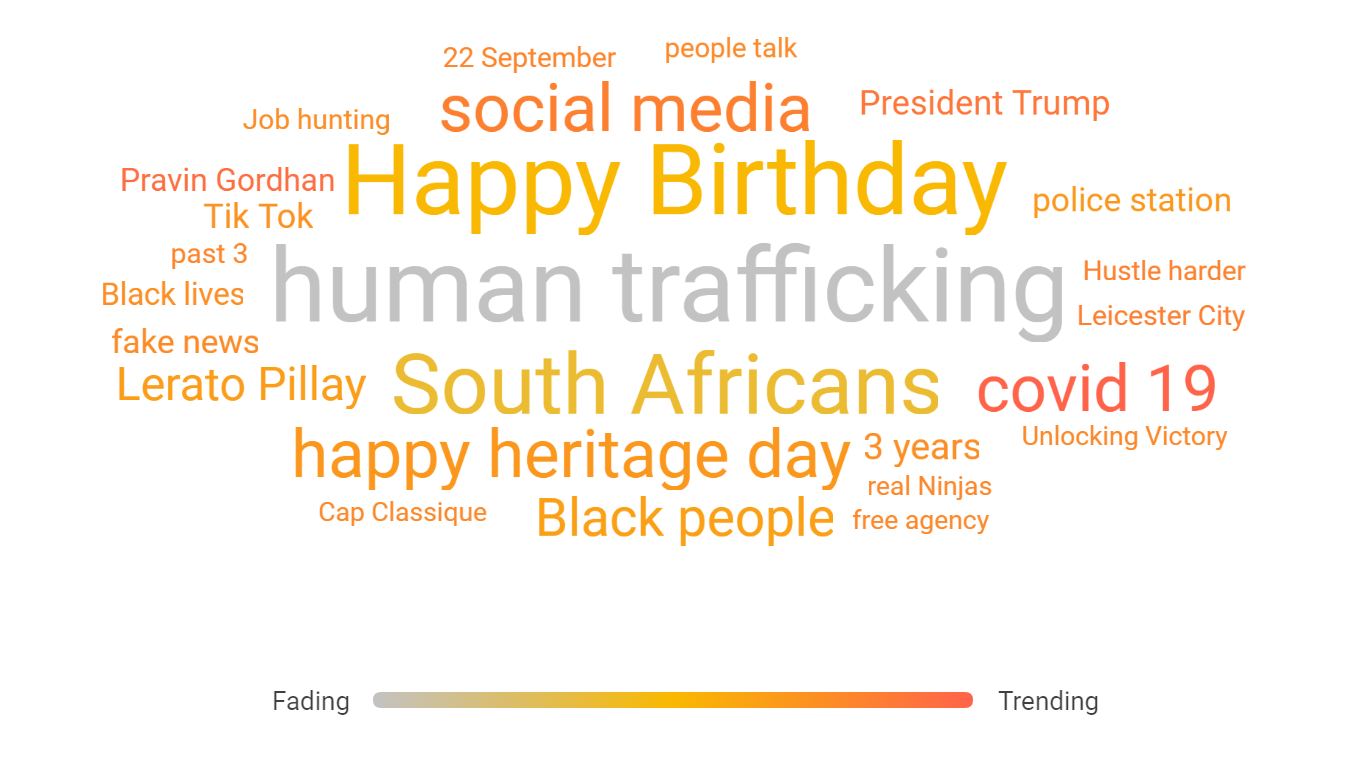 This is a summary of the trending, highest impact, and most active themes and their narratives related to social cohesion and division in South African public-domain social media conversations between 23 and 30 September 2020.

Xenophobia posing as nationalism, and concerns for public safety, loomed large this week as social media became a battleground between fact and fiction.

A coordinated movement incited distrust of foreigners and urged the public to join their protest outside the Nigerian embassy on 23 September. They claimed they were going to “Clean SA” of Africans from Zimbabwe, Somalia, Nigeria and Malawi.

Most South Africans did not buy the divisive narrative that the #putsouthafricansfirst movement had spun. 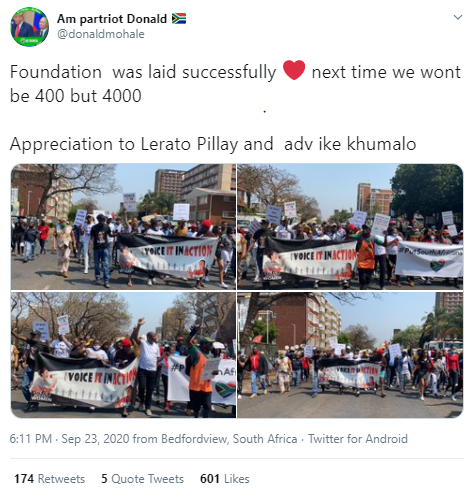 The turnout at the protest was weak.

But this did not deter the movement from trying to spin the poor turnout. Ike Thami Khumalo tweeted that “more crowds were expected”, and then presented an unconnected argument that Jewish people made up a small percentage of the population, yet dominated the economy of every country. Presenting such unfounded claims as fact has become a typical tactic of rightwing, nationalist movements that use unverifiable statements to confirm prejudices people may harbour.

Displaying an image of anti-apartheid struggle hero Winnie Madikizela-Mandela, @uLerato_Motaung tweeted: “I stand with Lerato Pillay.” It was recently revealed that Lerato Pillay is the virtual persona of Twitter account holder Sifiso Gwala, a dismissed former member of the SANDF. The unrelated use of the struggle stalwart’s picture appears to be an attempt to attract attention.

Meanwhile, the Lerato Pillay account has deployed a tactic used by US president DonaldTrump’s reelection campaign: when rigorous fact-checking by the media contradicts your unfounded claims, simply demonise and ridicule the media as corrupt.

On 24 September @Lerato_Pillay posted: “We must allow no one to silence us, not even corrupt SA MEDIA.” This post was retweeted more than 200 times and had close to 800 likes.

@MrHandsome_ZA, a Twitter account holder who calls himself a pyramid schemes investor in his bio, said of Lerato Pillay: “It can’t be that someone who speak for South Africans is victimized so much, while people who are committing crimes are not given any trouble. I’m just glad he owns a gun.”

@bamakhani79 responded: “Supporting faceless account is dangerous on its own. I support real people like Marawa, Nyovest, Marven, Tau etc.”

Conversations about GBV, human trafficking and kidnapping featured prominently over the past week, with several attempts to use these emotional topics to promote xenophobia. 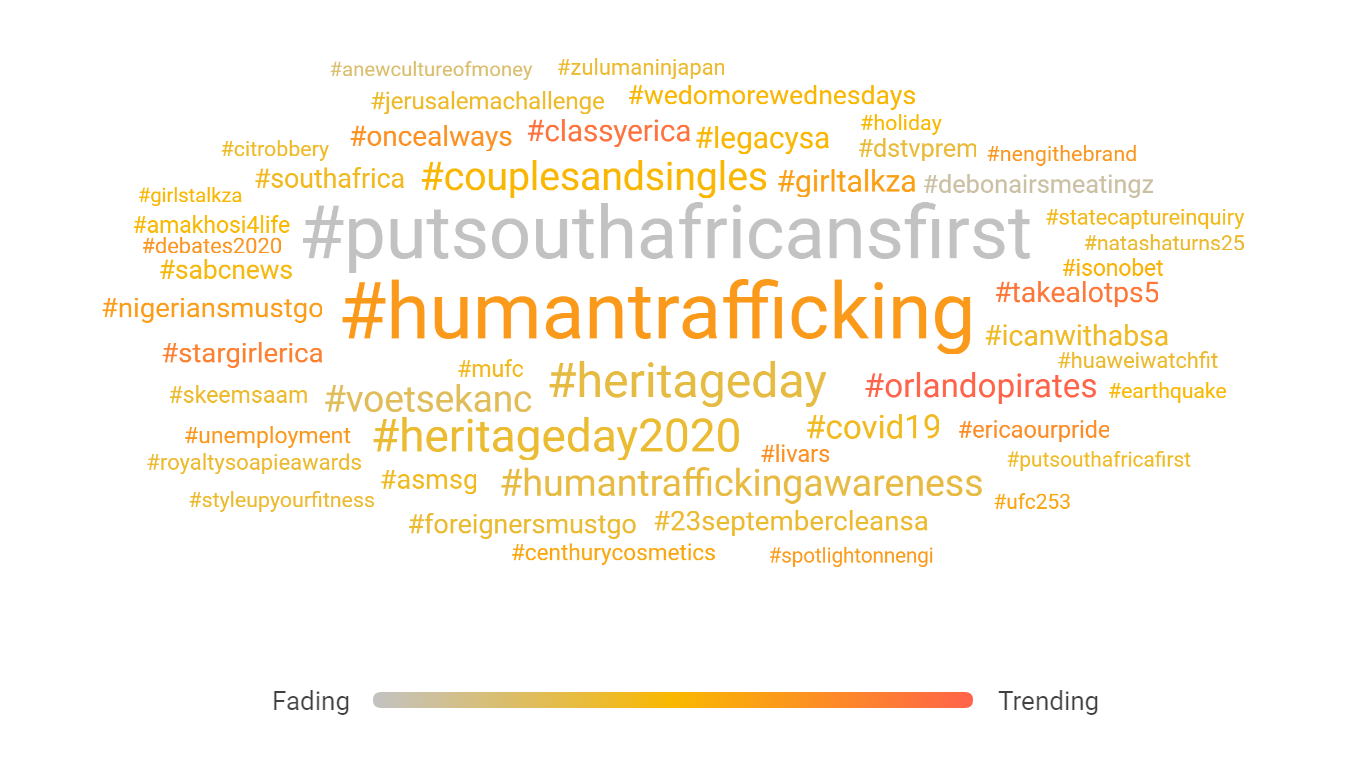 While many tweets expressed genuine concerns, a wave of posts blamed African foreign nationals for crimes, albeit with no evidence.

On 24 September @aman_madixx posted this tweet: “This guy is a kidnapper, be careful accepting requests around Auckland Park from him. He drives a stolen vehicle. As a female if you have to request alone use Uber, @Boltapp_za has had numerous complains about kidnappers but they don’t do anything about it.”

This was followed by an attack on businesses like Uber and Bolt, implying that it was dangerous for women to use these services. This post was retweeted close to 2,000 times. The tweet presented a picture of a man named as “Farah”, who does not appear to be the same man in the initial image that was tweeted.

Another tweet that received more than 700 retweets and close to 400 likes identifies a man as “Alexandro South” and accused him of human trafficking in Rustenburg. The post alleges that “South” is a Nigerian, but a review of the Facebook account that was tweeted revealed that the person in the image was actually from Cameroon.

Despite these tell-tale inconsistencies, some angry responders threatened “South” with violence. Others demanded that the person making the xenophobic tweets must stop. 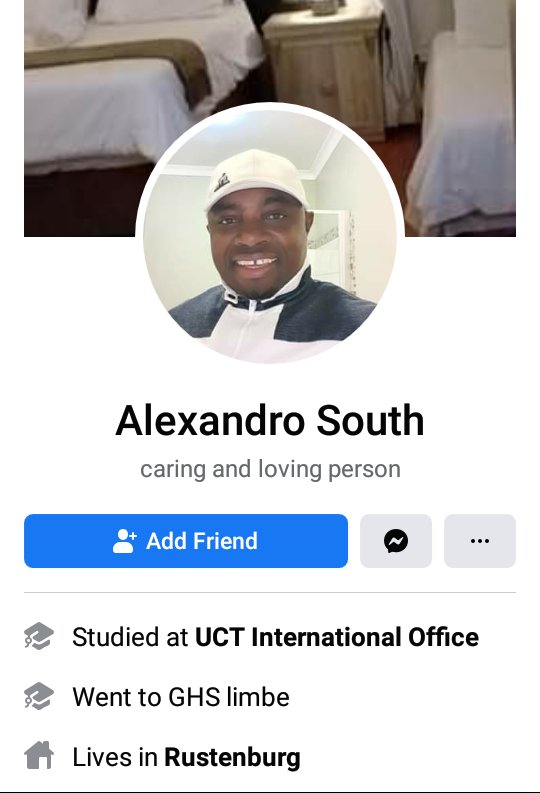 The bio of the profile that tweeted the first post in this thread, @Thuto43689122, included the hashtag which has become central in the xenophobic conversation: #PUTSOUTHAFRICANSFIRST.

Conversations about racial inequality and black identity gained traction in the past week as several users accused President Cyril Ramaphosa of neglecting the interests of black people.

Infamous parody account @TracyZille tweeted: “While the likes of Chris Hani were busy fighting Apartheid this Ramaphosa was busy negotiating the selling price of Black people. Ramaphosa came out of the struggle with billions in his pockets and Chris Hani came out with a coffin and bullets in his body. #RamaphosaSoldMandela.”

Then Msigi_Emotion tweeted: “Get well soon Mr President, white people are nothing without you!!” This tweet received nearly 700 retweets and over 2,500 likes.

Other users interrogated the systemic racism that affected black people. @ThabileMpe shared a tweet about agricultural economics that demonstrated racial disparity and how “food is political”.

Adding to the discourse, @MoanerLeaser tweeted: “I struggle with the ‘Black people do not want to buy books’ in relation to book sales in this country, I think there’s a lot that needs to be addressed, starting with unemployment statistics versus book prices and the general content within said books.” This tweet received nearly 300 retweets and 462 likes.

Conversations about South African politics ranged from unemployment and corruption to the economy and the registration of political parties.

The construction of 50 low-cost houses by the Free State housing department raised eyebrows after @goolammv claimed that each unit had cost R28-million. This was retweeted 400 times and received 626 likes.

Later, @ricardomackenzi criticised the disgraced Andile Lungisa for continuing to receive a salary while behind bars.

Many tweets condemned the government for the unrelenting unemployment.