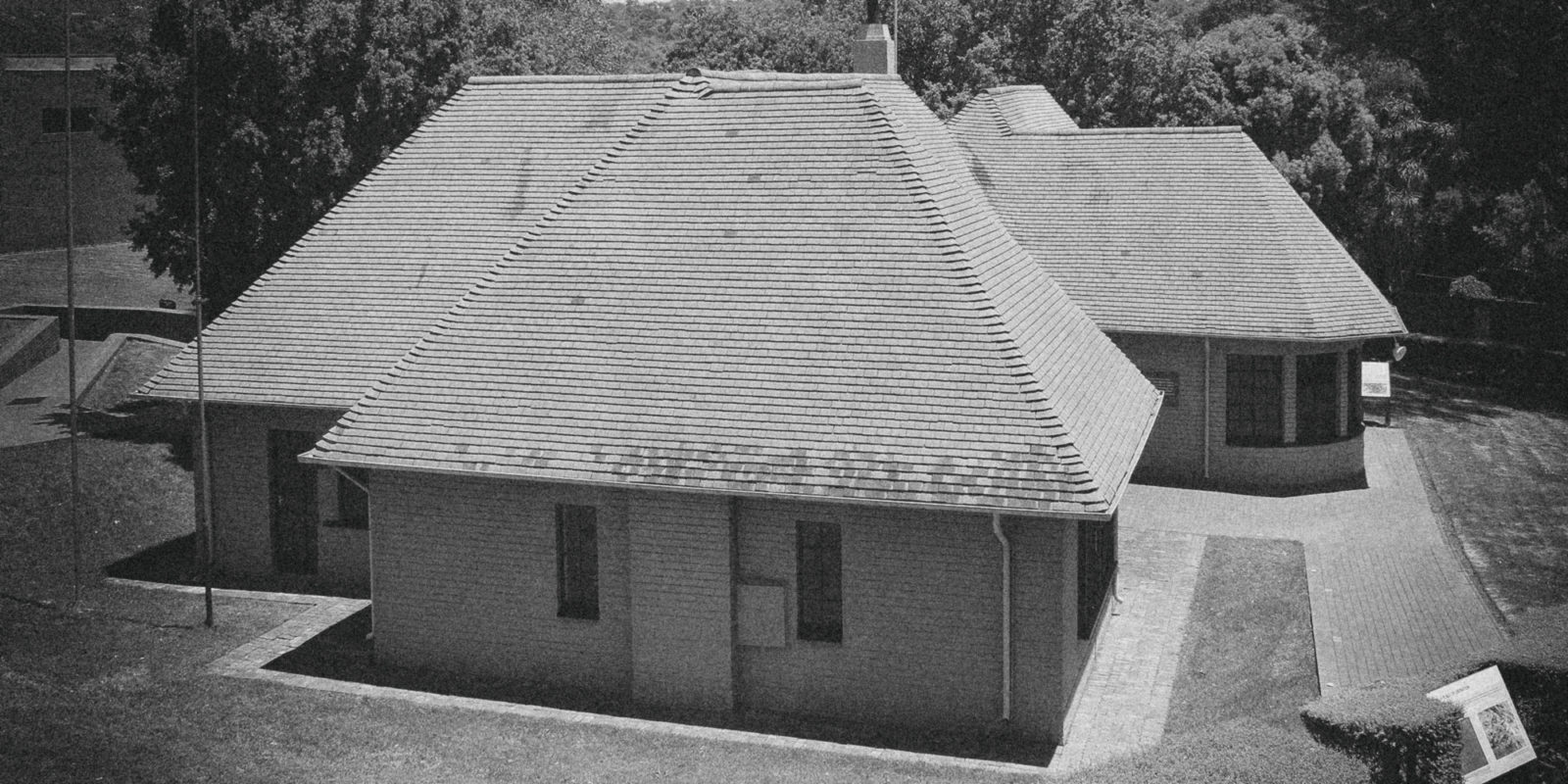 Lilliesleaf, a homestead in a wealthy area on the outskirts of Johannesburg that was an ANC safehouse. (Photo: Wikimedia)

The social milieu from which I emerged into anti-apartheid politics was rather different from that of my comrades in the Congress of Democrats. Even those who also came from Germiston came effectively — and literally — from the other side of the tracks in that mining and railway hub. And that proved to have advantages that were, perhaps, not understood.

As a school-leaver journalist, I supported the Germiston Callies soccer team. And that meant fairly regularly drinking with other supporters and various residents from the far-from-salubrious surrounds of Driehoek and Georgetown.

It was a classic white working-class pub, presided over, occasionally with a degree of menace, by the bulky frame of Johnny Eccles and where the elderly barman was known only as Wireless because of the large hearing aid he wore. This was an environment where the jokes were crude and usually sexist, the politics simplistic and racist; where anything vaguely to the left of Genghis Khan would be dubbed communist and verbally despised as much as bosses, capitalists, supervisors and foremen.

One of the regulars was a young railway police constable who lived in the area, but was based at Park Station in Johannesburg. He was a bit of a loner and the butt of jokes along the lines of how many trains he had caught that day.

But he could respond in kind. And, because we were all “chommies” (mates) this was treated as harmless banter. Besides, if he was greeted at all when he entered, it would be as “Constable”, stressing his lowly rank. It must also have been obvious that we did not regard railway police as real police.

But on Wednesday 3 July 1963, when the railway police constable walked into the Kings, he was keen to boast that the railway police at Park Station had been given special status. Their “chief” even had a “special direct line” to “Lang Hendrik” (Security Police boss Hendrik van den Bergh).

If anything, this provoked a yawn among everyone except me. For the first, and only, time I sat beside the constable and bought him a drink. And then another. And another. By closing time, I had ascertained that the railway police at Park Station had been given a “confidential briefing” by their bosses to be especially alert. They had also been told about the direct link to Van den Bergh.

Crucially, however, the word was that there was a “big meeting” about to take place in Johannesburg — “kaffirs, coolies die hele fokken lot” — and that one of the “communists” would be coming up from Cape Town in disguise, by train. The constable seemed to think the group would be arrested that weekend.

Loose talk, but, I thought, crucial. After closing time and after seeing the constable off, I drove immediately to Johannesburg to Jean Strachan as the person we in the Congress of Democrats (COD) were supposed to report to. She was not impressed at being woken up close to midnight, but listened as I stressed the importance of the message.

There was a small general store near where we had been dropped. We collected what money we had and, while the other seven stayed hidden in the undergrowth, I went to the store and bought Coke, polony and bread, which we consumed with great gusto. Eventually, our lift back to Johannesburg arrived.

Throughout the following weekend I was on tenterhooks and, when no police action was reported, felt I might have played a part in averting a major setback. But on the following Friday, the news broke that the MK underground leadership had been arrested at Rivonia. I went straight to Jean to try to find out what had happened, only to have her admit she had not passed on the message. “There were just so many scare stories going around,” she said.

General, open meetings, non-racial coffee bars and now this. I was shattered and confided in Joe Kajee of the Fordsburg group and Mike Ngubeni from Soweto. We agreed that, while we would continue working with the existing structures, we would have to do our own thing. But we also agreed we needed guidance, training.

Reg September, whom I had met in Cape Town, had fled to Swaziland and we assumed he might be the person to help us. That was how five would-be revolutionaries — four Indian Youth Congress members and I — squeezed into my small car and drove, via one farm gate, over the mountains into Swaziland.

Reg September was not only not impressed, he was furious and ordered us to “get out”. We could hardly do so in broad daylight. So, after a day cruising around trying to look inconspicuous and an evening wallowing in the then undeveloped natural hot springs outside Mbabane, we drove back into South Africa at midnight to plan our next move.

Because we obviously needed storage for materiel we hoped to make or steal and that could double as a hideout, I suggested taking a small combined group on a two-day, overnight, route march in the Magaliesberg mountains north of Johannesburg. There we would search for suitable caves while, at the same time, I, a former Boy Scout, could provide some bushcraft instruction. A trusted supporter from Fordsburg would provide transport in a minibus.

The volunteers, two from Soweto, three from Fordsburg and, accompanying me, a known COD member we all trusted, Paul Trewhela, all turned up at the separate pick-up points. But the bus was more than four hours late. So when we bundled out into the thick undergrowth near the Hartbeespoort Dam overflow, careful not to be seen, it was into afternoon heat. And, halfway up the mountain when I called a water break, I realised that I had neglected to tell anybody what a route march entailed. “Nobody told us to bring water,” was the common refrain. So we shared the water in my bottle and continued up the mountain.

There was some food and everyone had at least brought a blanket. But we were in high spirits and, after some desultory exercises in tracking and bushcraft and animated conversations around a campfire, we settled down as best we could on the rocky ground. Before sunrise, everyone was woken by a slow and steady drizzle of rain.

When the sun came up, in that splendid sudden blaze of the highveld, it revealed numerous pools of water. We drank, splashed our faces, filled my bottle and hung out clothing and bedding to dry. Life was good. Issy Dinath, to emerge half a century later as the executive chair of the Krugersdorp/Mogale City Council, declared that we were the start of the revolution.

However, if this was supposed to be a revolutionary exercise, I think we all realised that we were still in kindergarten. But we promised to be fast learners and epic revolutionaries. Unfortunately, because of prison, exile and early death, I don’t think any of us got the chance to prove that point.

It was also wasps that put paid to the Magaliesberg venture. Dried off and having drank our fill, I roped up to climb around the corner of a cliff to explore a potential cave. As I reached around a corner, my left hand hit some crumbling matter: a wasp nest. I shrieked and clung on, trying to keep still as the angry insects stung my hands and neck.

When the wasps retreated I was hauled to safety by the others, amid great mirth, tinged with evident relief. It seemed a suitable ending to a disastrous episode. So we crept down the mountain and trekked through the undergrowth, aware that a group such as ours would arouse the wrong sort of interest.

There was a small general store near where we had been dropped. We collected what money we had and, while the other seven stayed hidden in the undergrowth, I went to the store and bought Coke, polony and bread, which we consumed with great gusto. Eventually, our lift back to Johannesburg arrived.

We went our separate ways to pursue perhaps more prosaic means of forwarding the revolution. But some of these eventually resulted, for me, Paul Trewhela, and many others, in detention and interrogation at the notorious Compol security police headquarters in Pretoria. DM