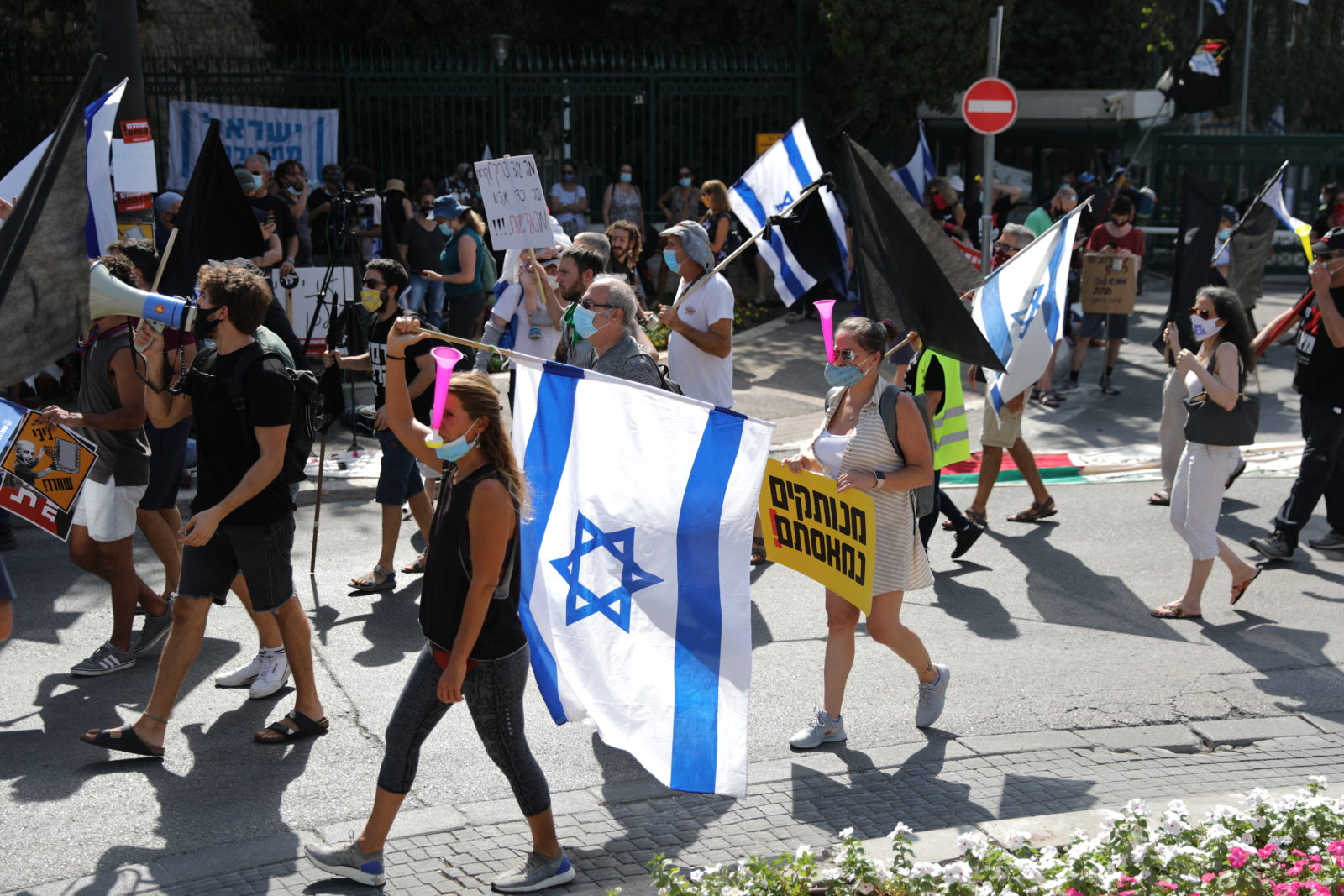 epa08705648 Anti-Netanyahu protesters demonstrate outside of the Knesset (Israeli Parliament) during a national lockdown in Jerusalem, Israel, 29 September 2020. An Amendment to the Coronavirus law is on the floor of the Knesset plenum which, if passed, would limit the anti-Netanyahu protesters to those who live within a Kilometer from his official residence in Jerusalem during lockdown. Netanyahu faces an on going trial with indictments filed against him by the State Attorney's Office on charges of fraud, bribery and breach of trust. EPA-EFE/ABIR SULTAN

JERUSALEM, Sept 30 (Reuters) - Israel's parliament approved a government-backed edict on Wednesday likely to stifle protests against Prime Minister Benjamin Netanyahu over alleged corruption and his handling of the coronavirus crisis.

The legislation, ratified after an all-night debate in the Knesset, bans Israelis from holding demonstrations more than 1 km (0.6 miles) from their homes, a measure the government said was aimed at curbing COVID-19 infections.

Critics of the new measure, which becomes part of Israel’s second national lockdown that went into effect on Sept. 18, said it was really intended to block protests near Netanyahu’s official residence in Jerusalem.

“What’s the next step? Banning the opposition leader from addressing parliament?” Yair Lapid, who heads the opposition in the legislature, tweeted about the vote.

For weeks, thousands of demonstrators have gathered to call for Netanyahu’s resignation.

Opinion polls show only about a quarter of the public has confidence in the way he has dealt with the pandemic, which had largely subsided during a March-May lockdown.

Hours before the vote, hundreds of Israelis protested outside parliament, calling the protest limit a blow to democracy.

Israel’s lockdown, which closed schools and limited business operations, was imposed after new COVID-19 cases climbed to around 7,000 a day in a population of 9 million, overtaxing some hospitals.

Netanyahu says Israel has handled the health crisis relatively well and that he has no political motive in seeking to prevent protests. He denies any wrongdoing in three corruption cases against him.

But with infection rates still high, especially in ultra-Orthodox Jewish neighbourhoods where social-distancing compliance has been lax, Netanyahu said on Tuesday that lockdown measures, scheduled to last three weeks, might have to be extended for at least a month or longer.

Israel has reported 234,060 infections and 1,516 deaths from COVID-19, the respiratory disease caused by the coronavirus. (Editing by Gerry Doyle)