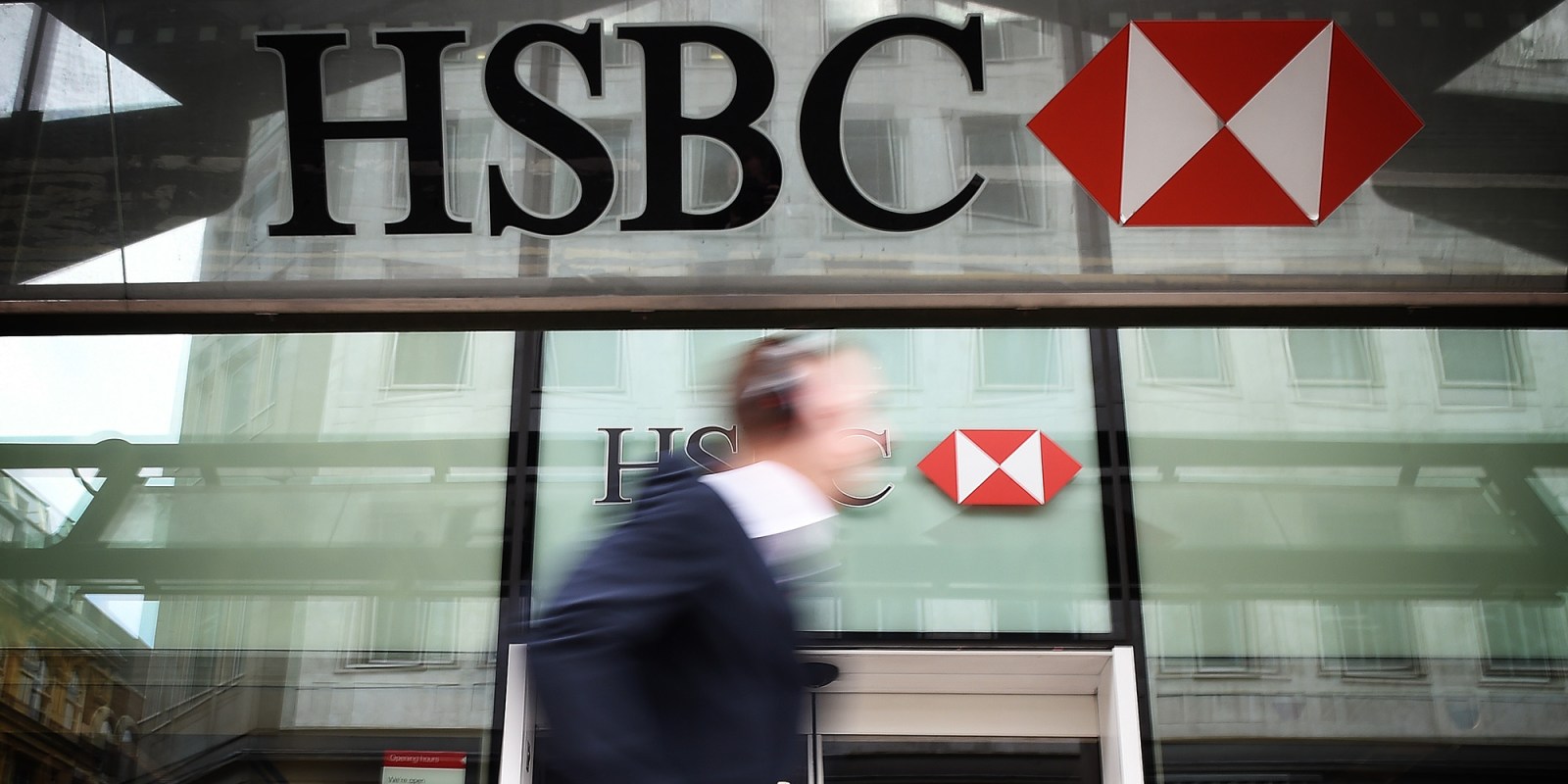 HSBC is just one of many banks that should have to answer questions before the Zondo Commission, say the writers. (Photo: EPA-EFE / Andy Rain)

Banks are an essential cog in a global money-laundering architecture that enables the corrupt and criminal to disguise and hide the proceeds of their crimes.

New revelations from the US reveal the depths of the problem of banks laundering money and the urgent need for accountability. They also remind us of the urgency of holding to account the global and local banks that enabled State Capture in South Africa.

Last week the International Consortium of Investigative Journalists (ICIJ) and Buzzfeed released a trove of documents showing how for nearly two decades the biggest global banks, JPMorgan Chase, HSBC, Deutsche Bank, Bank of New York Mellon and Standard Chartered, laundered money for organised crime groups and kleptocrats across the world. The documents consist of 2,100 “suspicious activity reports” filed by these banks with the US Treasury’s Financial Crimes Enforcement Network (FinCEN).

The FinCEN files reveal how these banks approved more than $2-trillion worth of transactions from 2000-2017, which their employees flagged as being potentially criminal in nature. The banks fulfilled the bare minimum reporting required by law, but did nothing more to stop or curb the flow of illicit cash from kleptocrats such as Isabel dos Santos and the cryptocurrency scam artist Ruja Ignatova.

If FinCEN did not follow up, the banks were happy to continue to profit from the transactions. For example, JP Morgan facilitated a $1-billion transaction for a company through a London account without even finding out who owned the company. It later turned out the probable owner was a mob boss on the FBI’s “most wanted” list.

One of the banks implicated in the FinCEN files is global giant HSBC. Reports indicate that despite repeated warnings from its own compliance department, HSBC facilitated vast transactions linked to a notorious Ponzi scheme through its Hong Kong accounts. In a cruel irony, this was while HSBC was on supervised probation as part of an agreement with the US government to escape prosecution for laundering money for the notorious Sinaloa and Norte del Valle drug cartels. It had also paid a relatively paltry fine of $1.9-billion and promised to clean up its act and institute tighter anti-money laundering controls.

HSBC routing dodgy cash through Hong Kong will sound familiar to South Africans. In March, Open Secrets wrote about HSBC’s role in laundering kickbacks from the Transnet locomotive deal. Transnet was one of the key sources of extraction for the Gupta enterprise, and Transnet’s procurement of 1,064 locomotives was a bonanza. The Chinese state-owned CRRC group of companies agreed to pay a staggering R9-billion in kickbacks to Gupta fronts in order to win the R42-billion contract.

Initially, the kickbacks were paid via two Dubai-registered companies, JJ Trading and Century General Trading (CGT); traders of scrap metal, rice and beans which had taken an odd foray into locomotive consultancy. HSBC facilitated the money flows, and did eventually flag suspicious transactions that had flowed between CGT and JJT and other shell companies. However, it did so three years too late and after billions had been laundered.

From 2014, a significant amount of the kickbacks was laundered through two Hong Kong-based front companies: Tequesta Group Limited and Regiments Asia. Both companies were set up by Salim Essa on the same day, 20 June 2014. Both companies were banked by HSBC. These companies would go on to launder billions more in money looted from the South African public.

These accounts should have raised numerous red flags at HSBC. It was obviously suspicious that a newly formed company with a single director and no discernible infrastructure would suddenly be paid huge sums from a Chinese state-owned rail company. Moreover, by 2016, Essa was publicly known to be closely linked to the Gupta family enterprise; this would have rendered him a politically exposed person (PEP) and should have been flagged by the bank. Finally, the actual movement of the money in and out of the companies’ accounts was suspicious and indicative of money laundering; R1.3-billion was paid to Tequesta and Regiments and then quickly paid into other Gupta-owned offshore companies in different jurisdictions.

Former UK Cabinet minister Lord Peter Hain alleges that HSBC’s compliance department did flag the above transactions as suspicious, yet the accounts continued to operate for years. This would fit the pattern of conduct identified in the FinCEN files.

This is why Open Secrets and Shadow World Investigations (SWI) submitted evidence to the Zondo Commission and urged the commission to summon HSBC to appear and answer questions about its role in laundering money looted from Transnet. HSBC should have to account for why no attempt was made to shut the accounts promptly.

What about South African banks?

HSBC is just one of many banks that should have to answer questions before the Zondo Commission. All South Africa’s large banks are accused of facilitating hundreds of suspicious transactions for Gupta-linked entities during State Capture. Several have refused to say whether they submitted suspicious activity reports to the Financial Intelligence Centre. Yet, if they did, they filed the reports and kept the suspicious accounts open for years.

Standard Bank and FNB both provided banking facilities to Estina, the Gupta front company that was used to steal money meant for farmers in the Free State. When asked by SWI, these banks refused to provide any details on whether they had reported suspicious transactions linked to the accounts, or to explain why they had not taken steps to close the accounts earlier. As was the case with HSBC and Transnet, there were numerous red flags that any diligent bank would have noticed. Why was a small company headed by a computer salesman suddenly receiving large sums from a Free State government department and then dispersing most of it to Dubai, leaving little operating balance in the account? FNB was still facilitating these transactions a year after it had been publicly confirmed that Estina’s contract had been cancelled due to irregularities in the procurement process.

Open Secrets has also written about Nedbank’s role as the Bank of Baroda’s correspondent bank while Baroda was the Guptas’ bank of choice for laundering the proceeds of corruption. Nedbank has also been accused of entering into a dubious interest rate swap with Regiments Capital, which used the deal to fleece Transnet. Absa is implicated in facilitating suspicious transactions linked to an Eskom employee who received vast payments from an Eskom contractor and then withdrew millions in cash over a few days.

The common theme in all of these cases is that none of these banks has had to publicly account for their alleged role in facilitating these crimes. All we do know is that recently, the South African Reserve Bank’s Prudential Authority fined Standard Bank, Absa, Nedbank and FirstRand a total of R157.5-million for failing to comply with anti-money laundering legislation between 2014 and 2019.

Not only are these fines paltry compared with the banks’ profits, and unlikely to discourage repeated conduct, there is no transparency about which specific cases the fines relate to. The banks get a slap on the wrist, and the South African public is left in the dark.

It may well be the case that, just as the FinCEN files reveal about global banks, South Africa’s banks simply reported suspicious transactions and then continued to facilitate them despite thinking that they were most likely criminal. If they did this without taking further steps, they made the choice to profit from crimes that have devastated South Africa. They must urgently account for their role in corruption to the South African public, and be held accountable where they have broken the law. DM

Mosiana and Marchant are researchers at Open Secrets. www.opensecrets.org.za