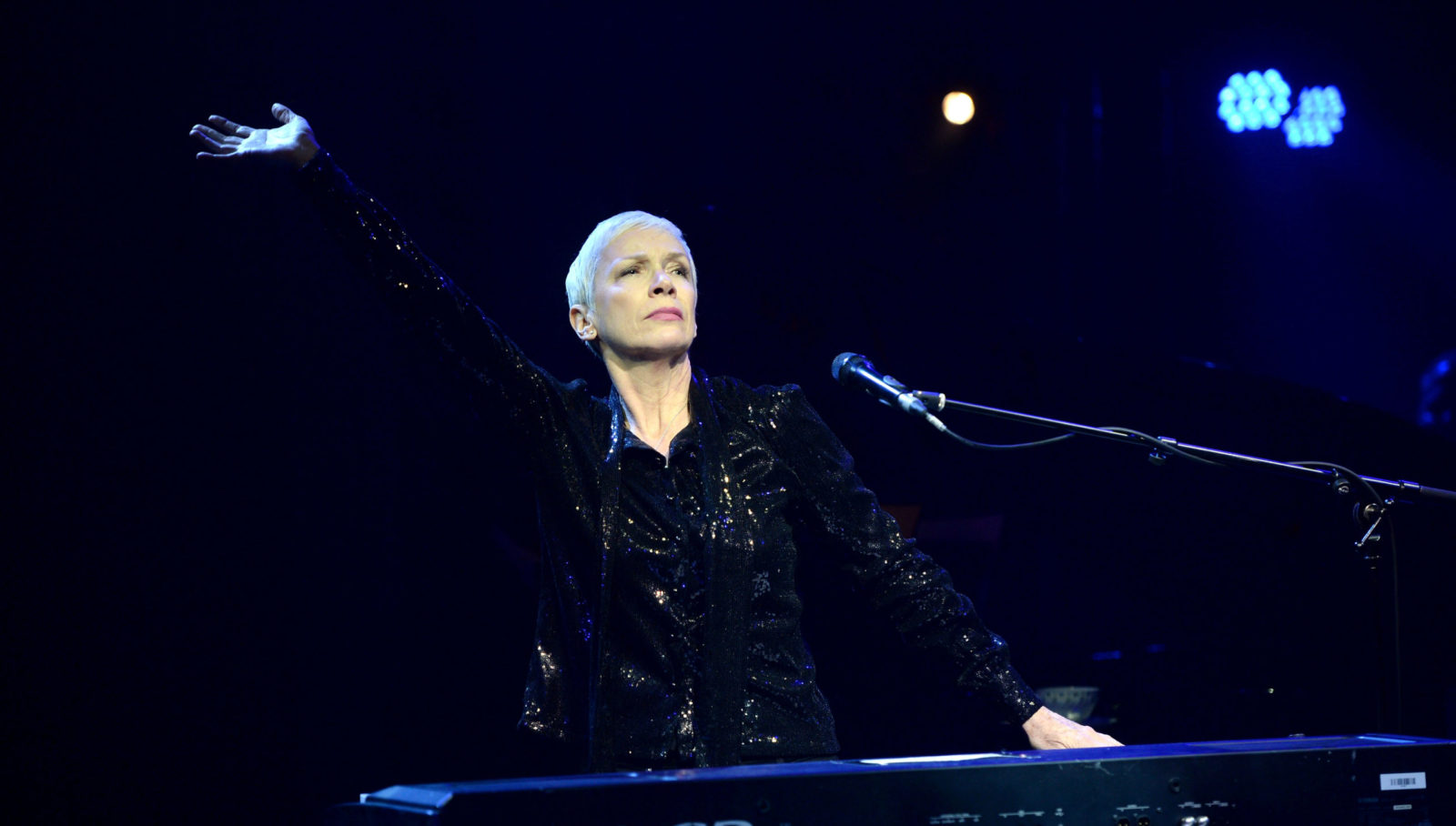 When countries around the world went into lockdown, Annie Lennox decided to switch to online to meet people she loved. The result? Raw and inspiring conversations.

Scottish songwriter and former lead singer of the band Eurythmics, Annie Lennox, is sitting in her cupboard. It’s barely 10am in Los Angeles and in times of interviews still mainly done via Zoom calls and Google hangouts, this is not unsurprising – she was looking for a quiet space and as it happens, that space was in her closet; it’s a walk-in closet with turquoise walls, neither too big nor too small, and as she sits down, the soft sea colour of the walls reflects on her face gently, tainting the conversation with an aquatic feel (although on Zoom, colours cannot be trusted).

Even though America is no longer in lockdown – at least not at the time of the interview – she has been spending time at home, having conversations with people from around the world she finds interesting.

One of her conversations is with Anele Mbane – a young South African she met while spending time in Cape Town.

“I’m very interested in that generation because I feel like they were born in the moment where there was such great hope for change, where the opportunities were shining…”

Lennox’s relationship with South Africa goes back to the Nineties and her involvement with the 46664 campaign that created awareness around HIV Aids; but for the last eight years, she has also been spending time in Cape Town with her husband, Dr Mitch Besser, who founded the organisation called Mothers2Mothers in 2001. His idea was “to employ former patients who had successfully accessed and adhered to treatment and given birth to an HIV-free child as peers called ‘Mentor Mothers’ to help others walk this same path”. And it worked, 19 years later, M2M “operates at hundreds of health centres and communities in ten African nations, and has reached over 11 million pregnant women, new mothers, and children”.

It was on one of her visits to Cape Town that Lennox met Mbane. “One day, I went into this really sweet shop where they made beautiful custom-made shirts and blouses and little things that were absolutely beautiful. And I was kind of bowled over by the quality and the beauty of the things they were selling. I went in there and browsed around and there were two really great guys. One of them was the manager of the shop, that was Anele,” she explains.

They started a conversation that led to coffee and today, to a Zoom recorded, free-flowing call across continents.

“He’s a young man for me, because I’m 65, anybody below the age of 40 is a very young person to me… He is the generation that were born just after the apartheid system was done away with. I’m very interested in that generation because I feel like they were born in the moment where there was such great hope for change, where the opportunities were shining, where South Africa would be a freer country, would be a more equal country, would have opportunities for the kids,” she says.

“They’re going to grow up in a better society, going to have access to education, better housing; it is going to be great. And to me, that was what you would call ‘Rainbow Nation idealism’, and the hope that equality would start to happen and that South Africa would be a beacon of hope, over despair,” Lennox explains; as she does, her head tilts to the side, eyes lifting up as if to grasp the image of our rainbow nation for a moment, as if to not let it go.

“And it would be the place everybody would look to as a model country, where the transformation took place, the white and black and brown and yellow and every colour of people would be living in, it would be fantastic. I used to speak to Anele about this in the shop.”

More conversations followed, and when the pandemic shifted the world’s order, and everyone found themselves at home, Lennox decided to bring those chats online.

“I’m a human being on this planet. I have lived and looked around and seen such disparity, and such madness and such pain, the cruelty, the brutality of warfare that comes up, the injustice against women, the racial injustice that has gone on for time immemorial.”

“I just started wanting to have conversations with people and wanting to record them because… Celebrity culture is just so toxic, and you have reality TV, sure… I just wanted to have conversations with people that are meaningful, [conversations] from the heart and with connection and kind of organic the way that conversations are. Conversations are two-way events; both people speak; both people listen, and you don’t really know… you don’t sit down and say, let’s have a conversation about x y z, you just organically flow and if you have an exchange, it’s really satisfying. You try to solve the world that is so insolvable around you, but you feel better for it because it’s human connection…”, she adds.

She posts each conversation – with people she met, from around the world and from different backgrounds and walks of life – on her Instagram; the videos are raw, genuine, and for a moment, it feels a bit like eavesdropping on the nearby table’s conversation, while sitting at a bistrot sipping on red wine – social distancing, lockdown and the pandemic blurring in the background.

Annie Lennox has this power: blurring reality a little. Talking to her, it’s hard not to remember the global multi-awarded star and activist she is, and the artist behind the recent exhibition Now I Let You Go… where, according to Jillian Steinhauer, she presented “a roughly 8-foot-high and 65-foot-long mound of earth containing nearly 250 objects she acquired during her life” at MASS MoCA. And yet, with her wide smile, flicker in her eyes and that irresistible energy, her back against a turquoise wall in a cupboard, she blurs the celebrity aura and smashes any presumption one may have on stardom.

“I’m a human being on this planet. I have lived and looked around and seen such disparity, and such madness and such pain, the cruelty, the brutality of warfare that comes up, the injustice against women, the racial injustice that has gone on for time immemorial.”

Lennox stresses the urgency for us to gather and together, act – before it is too late.

“And you look at the planet and you say, what? Why has this? Why can’t we solve this? I’m one of the people that wants to see the solutions. And I see all the NGOs coming and doing incredible life-transforming work. I see leadership in politics that is disastrous, simply disastrous, self-seeking, arrogant, disconnected, with a lack of empathy for the people, with lack of justice, with lack of so many things. And it’s heart-breaking. You’re just left with a sense of hopelessness and despair, quite frankly. Charity is a great thing, but it’s not the solution to anything whatsoever. Solution has to lie in systemic change, that has to come from the people that were elected to lead the parties. And they just turned out to be so rubbish. And you’re just left with your jaw… Why are we so bad at this?

“You sort of look around the world and you recognise that these practices go on everywhere. And it’s so disheartening, you know, as an ordinary person… I’m an ordinary person, and I’m just like, my God, where do you take your ideals? Should you have ideas any more?”

And so, she talks – through conversations come ideas, opportunities, movements and possible change. DM/ ML