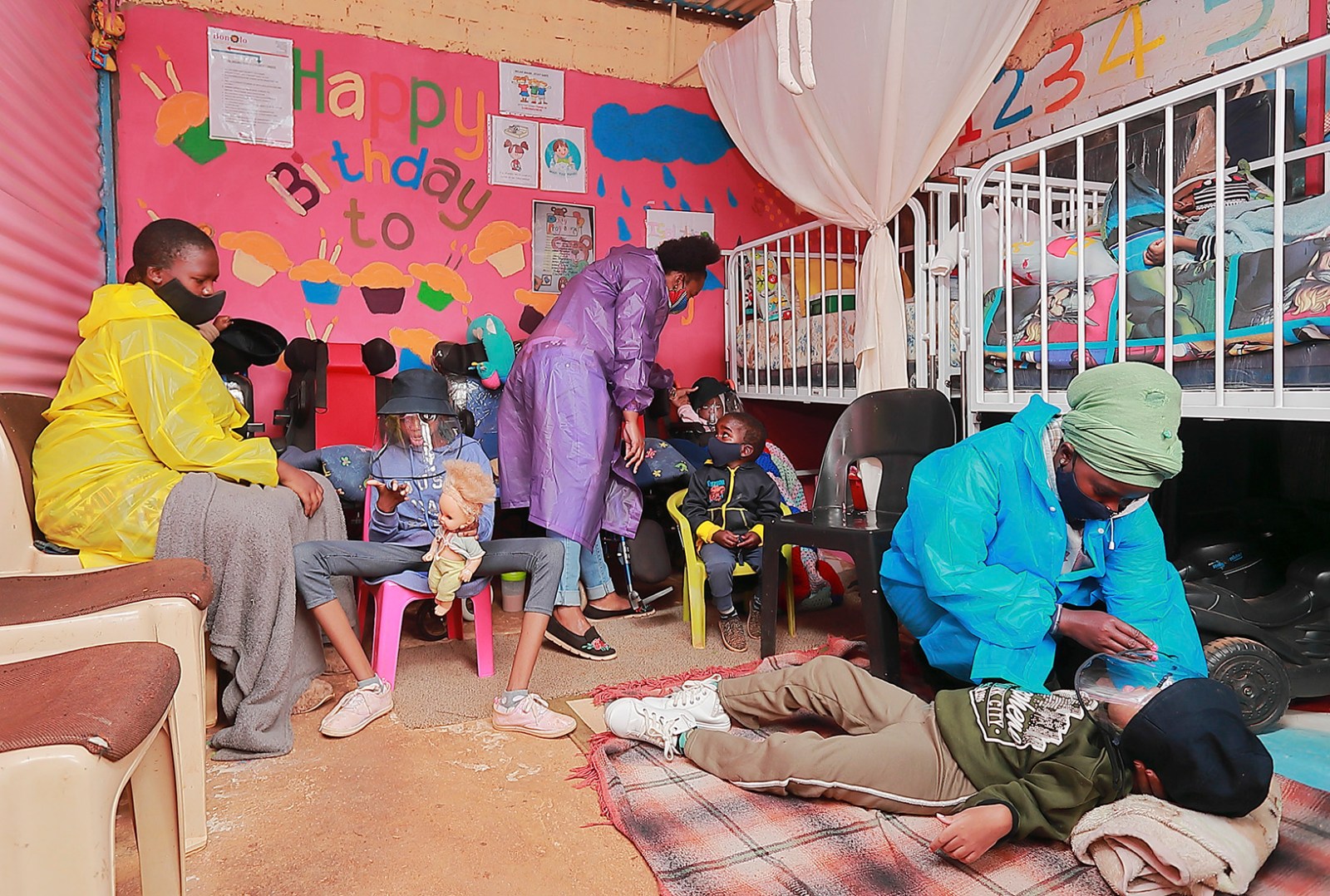 SOWETO, SOUTH AFRICA - SEPTEMBER 22: A general view of Bonolo Day Care Nursery For Disabled Children on September 22, 2020 in Soweto, South Africa. The day care aims to provide children with disabilities with a place where they will be kept safe, be loved, protected and nurtured. (Photo by Gallo Images/Fani Mahuntsi)

Women made up 67% of individuals who lost their jobs during the beginning of South Africa’s national lockdown, but what about those women who kept their jobs: how have they been affected? New evidence from the NIDS-CRAM shows that wage inequality between low-earning men and women has substantially widened as a result of the lockdown, and is likely driven by disproportionate childcare responsibilities.

Wage inequality between men and women is a systemic issue that has plagued countries around the world. The gender wage gap, as it is known, is a measure of how much lower a woman’s wages are, on average, relative to a comparable man’s wages. In South Africa, recent estimates of the gender wage gap show that for every R100 the average man earns, the average woman earns between R65 and R84. This is more or less comparable with estimates from America and Germany, where the average woman earns approximately R80 for every R100 earned by a man.

However, these estimates are all from before the onset of the Covid-19 pandemic. Evidence from around the world has shown that the pandemic is likely to disproportionately affect the economic outcomes of women relative to men. Evidence of this gendered effect in SA has come through in early research using the NIDS-CRAM data. Women made up two-thirds of job losses during the early stages of the national lockdown, and, due to school closures, they also took up the brunt of additional childcare responsibilities.

In our research using the two available waves of NIDS-CRAM data, we consider how the lockdown affected gender wage inequality among those who remained employed. Similar to the above, we find that women’s wages were more severely affected relative to men’s. According to our estimates, average gender-based wage inequality is persistent and, concerningly, seems to have grown between February and June 2020. However, the effect is not equal for all wage earners. In fact, wage inequality has grown most among those at the bottom of the wage distribution.

We find that for every R100 earned by the average man for a given hour of work, the average woman earned R70 before lockdown in February and R66 in June – indicative of a deepening gender wage gap. Of course, wages vary by a number of different factors, such as occupation, area and province of residence, highest education level and marital status. After taking these factors into account, we still find evidence that the average gender wage gap was 46% – 73% higher in June 2020 than its pre-lockdown level.

Of course, the use of averages hides potentially interesting information about what is happening along the rest of the wage distribution. When we examine the gender wage gap across people at different earnings levels, a slightly different story emerges. Gender wage inequality, at least for monthly wages, has deepened by a factor of almost five among the poorest 40% of workers. To put this into perspective, workers at the bottom 40% of the wage distribution earn less than R5,000 per month. On average, women in this bracket were earning R75 for every R100 earned by men in February, decreasing to R43 for every R100 in June.

Statistical evidence doesn’t give much support to the claim that there has been a deepening of gender wage inequality among high-wage earners. In fact, in some cases, our estimates suggest the opposite: wage inequality is at times decreasing between high-earning men and women. 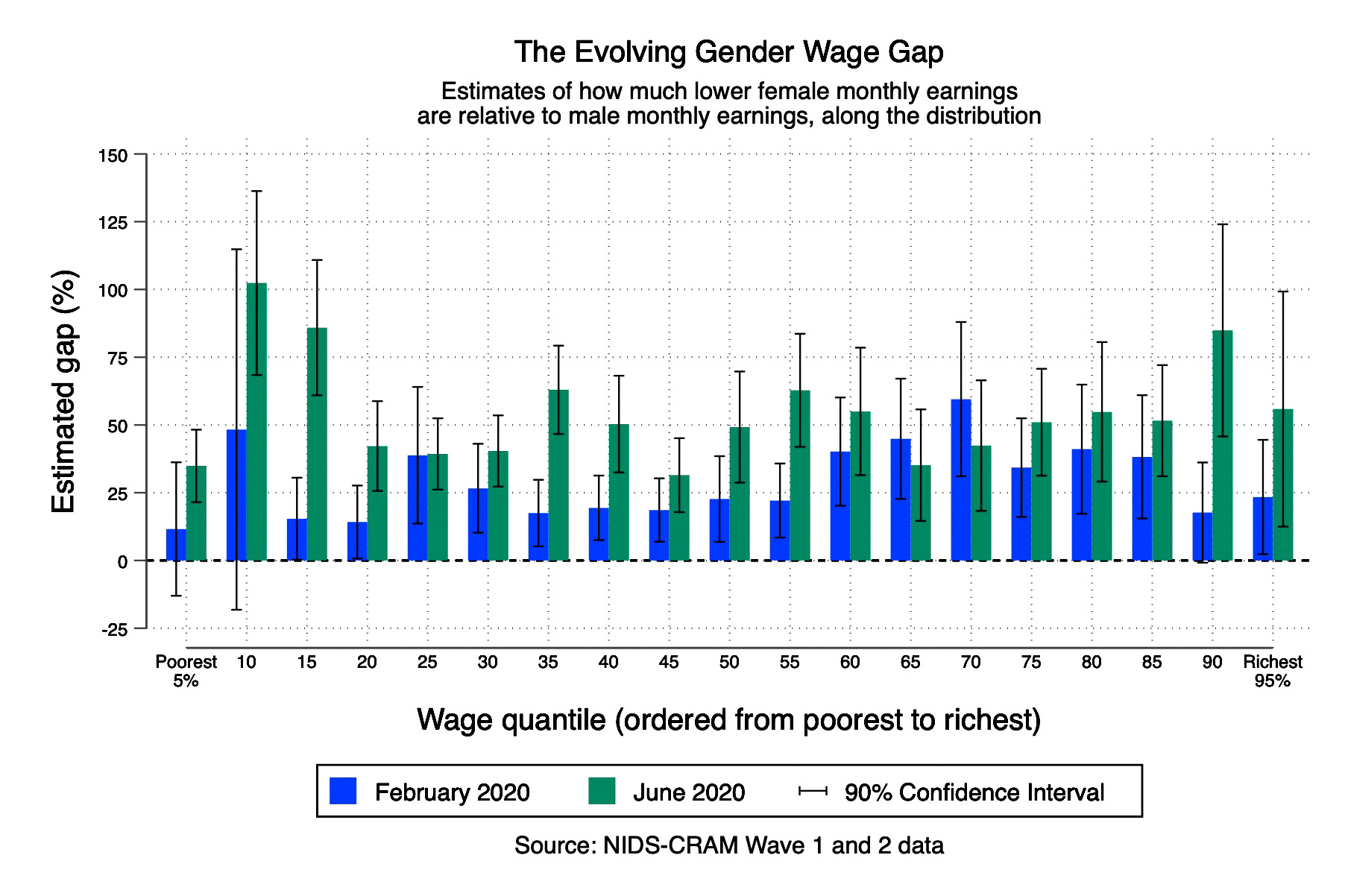 On the other hand, when we conduct this same analysis for hourly as opposed to monthly wages, our results show a broadly insignificant change along the entire wage distribution. Together, these findings suggest that a driving cause of increased wage inequality must be linked to working hours. Specifically, women – particularly those in the poorest third of the wage distribution – have decreased their working hours more than men in the same part of the earnings distribution.

This may be because women have had to pick up the lion’s share of childcare responsibilities during the lockdown period, reducing their available working hours. Alternatively, women may be employed in jobs that are less amenable to working from home than jobs in which men are employed.

The widening of the gender wage gap among poorer earners is of particular concern for policymakers, given that this speaks to deepening inequality among an already vulnerable group.

Government can assist in fighting gender wage inequality by providing targeted income support to such workers at the bottom of the distribution. Considering the child support grant is progressively targeted, and that about 98% of recipients (caregivers) are women, this grant might be an optimal mechanism to provide such support.

Policymakers ought to consider extending the duration of the top-ups to the grant system beyond its cessation in October. If this is not feasible, perhaps a provision of subsidised childcare programmes at schools would assist women to redirect their time from childcare to labour market activities, ultimately assisting in decreasing gender wage inequality. DM/MC

Robert Hill and Tim Köhler are both junior researchers and PhD candidates at the Development Policy Research Unit based in the School of Economics at the University of Cape Town.