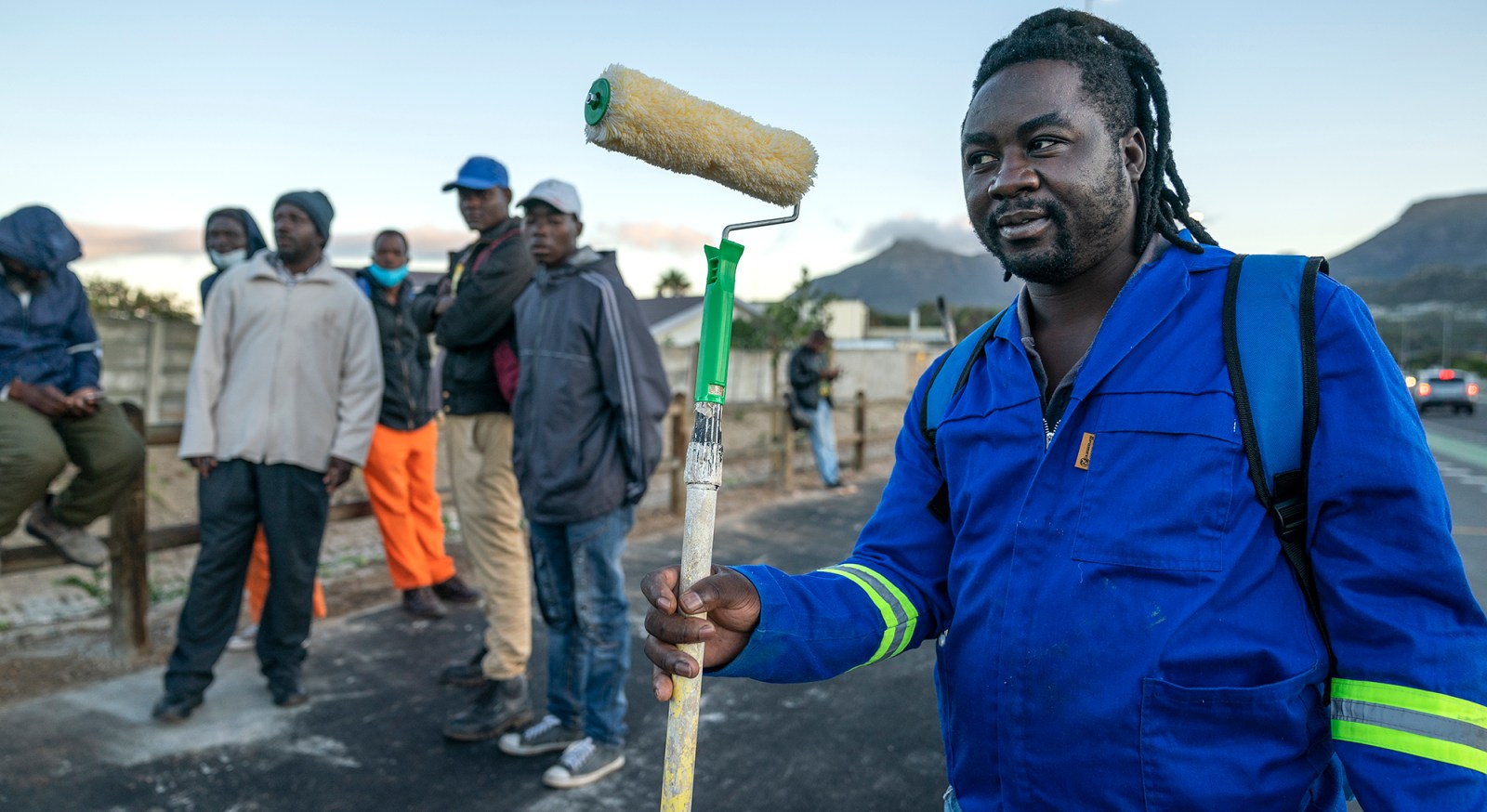 Painter Emanuel Chisiya waits for work in the informal sector with about 200 other jobseekers at a road junction in Cape Town, South Africa. (Photo: EPA-EFE / NIC BOTHMA)

The introduction of the Social Relief of Distress (SRD) grant seems to have contributed substantially to the poverty-rate recovery. We find that the SRD grant cushioned the poverty impact on job losers, with approximately one third living in a household with at least one SRD grant recipient.

By April this year, the Covid-19 pandemic had devastated the South African labour market, leading to large increases in poverty. Unfortunately, the labour market rebound that was hoped for following the relaxation of lockdown legislation from May onwards, has been incomplete. The loss of approximately three million jobs in April persisted into June, representing a loss of one fifth of February employment. Top-ups to social grants and the new “Social Relief of Distress Grant” did, however, offer some relief and moderated the poverty impact of this enduring labour market shock.

These are some of the key findings of our analysis of a new round of survey data from the National Income Dynamics Study: Coronavirus Rapid Mobile Survey (NIDS-CRAM), in which we investigate the extent and the magnitude of the economic and labour market recovery between April and June. This survey has tracked thousands of South Africans since the start of the pandemic, allowing us to make inferences about the broader population.

In our analysis of the first round of NIDS-CRAM data, we divided adults into those who were actively employed (green bars), on paid leave (yellow bars), temporarily laid-off (orange bars), and those without any employment relationship (red bars). The figure shows that net active employment declined by 21 percentage points (about six million jobs) between February and April. About half of this drop could be attributed to increases in paid leave or temporary lay-offs, but the other half (about three million jobs) was the result of terminated employment relationships.

However, this partial recovery is almost entirely accounted for by a large decline in the number of adults on paid leave or temporarily laid-off (yellow and orange bars). By contrast, the increase in fully severed employment relationships, which we observed between February and April, persisted into June (red bars). It appears that the most serious aspect of the Covid-19-related labour market impact – the loss of three million jobs – has endured.

While the figure documents net changes in the employment categories, there was also substantial reallocation of jobs – 40% of April’s “temporarily laid-off” workers, who expected to return to their jobs, reported no longer having any kind of employment relationship in June.

What happened to poverty over the Covid-19 period?

In our previous analysis, we estimated large increases in poverty for those who lost jobs during the hard lockdown in April.

Between April and June, however, active employment partially recovered and the government rolled out grant top-ups along with the new Social Relief of Distress (SRD) grant. By comparing April incomes to June incomes for the same individuals (all working age adults), we estimate that adult poverty rates decreased by approximately three to six percentage points (one to two million individuals) over this period, depending on the poverty line used. We cannot say how poverty in June compared to pre-Covid levels, as household income data was not collected for February.

The introduction of the SRD grant seems to have contributed substantially to this poverty-rate recovery. We find that the SRD grant cushioned the poverty impact on job losers, with approximately one third living in a household with at least one SRD grant recipient.

More generally, out of all adults in the bottom half of the income distribution, 10% had received the SRD grant in June, and 17% had successfully applied for the SRD grant by the time of interview in July/August.

The SRD grant also demonstrated generally progressive targeting, with poorer job-losers, those formerly in manual occupations or informal employment, receiving better coverage. However, some potentially less favourable features of the SRD grant design and implementation need to be kept in mind.

Women were disproportionately excluded from the SRD grant, likely due to the ineligibility of those who receive other assistance such as the child support grant. Implementation of the SRD grant was also slow and remains incomplete. We estimate that the vast majority of eligible adults had not been approved for the SRD grant by July/August.

Forthcoming waves of NIDS-CRAM will allow us to evaluate whether the labour market recovery continues to build momentum, or whether job losses endure. DM/MC