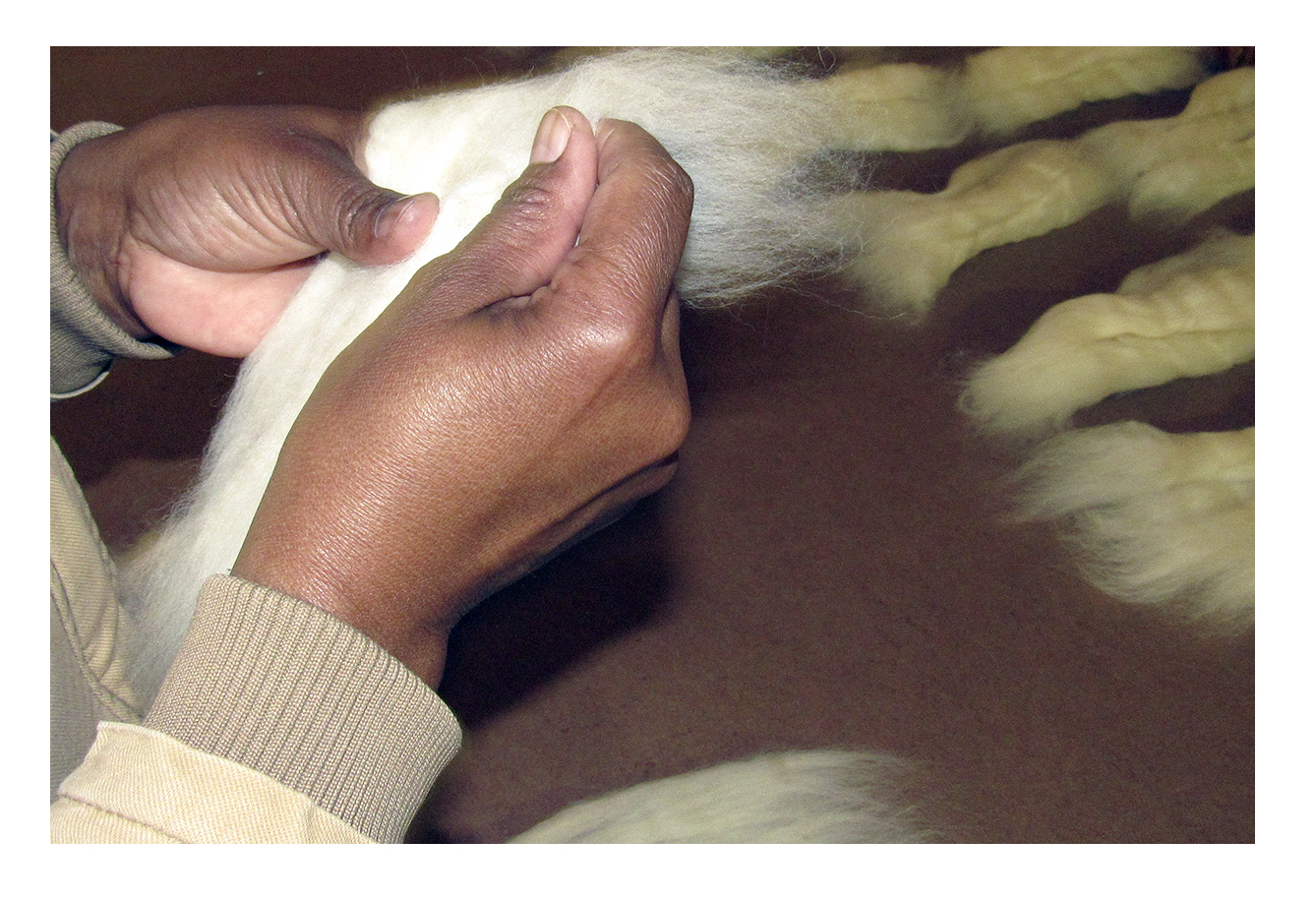 When he was 14, Aubrey Williams’ grandmother Lil taught him to sew on her old Singer sewing machine. Nearly thirty years later, these skills came in handy when Williams and his husband Lionel Millard turned their old Victorian Karoo Hotel into a wool duvet factory under lockdown.

Aubrey Williams and Lionel Millard moved from Johannesburg to the Northern Cape town of Richmond in 2019. With ten years’ experience in Joburg hospitality, their plan was to renovate and re-open the town’s historic hotel that had been partially damaged by a tornado while standing abandoned for decades.

A year later, Covid-19 hit. Under lockdown regulations, their brand-new Richmond Karoo Small Hotel was forced to shut its doors.

“We didn’t know where the hell we were going to get money, basically to just feed ourselves,” Williams tells Maverick Citizen.

“So, we were like, what can we do? Well we’re in the middle of sheep country, so we sourced around and found a supplier for wool that was still operating. We got a fabric supplier and started making duvets, and, ja, it took off like rockets. It was absolutely phenomenal. I mean, in three months, we were making more turnover with the duvets than we ever did with the hotel.”

And so, the Richmond Karoo Small Hotel became a wool duvet factory, with operations based in its grand wood-paneled dining room. The hotel is one of two double-storey buildings in Richmond, the tallest building in the town apart from the church spire.

“During hard lockdown, I was sewing and sewing,” recalls Williams. “I roped Lionel in and so he was separating wool and packing it out, so, ja, it was a big change from making breakfast and socialising with guests.”

Williams and Millard are both 44. They have been a couple for 16 years, after meeting on the internet.

“When we started out the duvets, I was working on this really old Empisal machine,” says Williams. “But we’ve plowed profits back into the business. Now I’ve got two industrial sewing machines and we’ve gone from a hundred stitches a minute to 3,700. Man, it’s like going from a lawn-mower to a Ferrari.”

What’s more, after the initial hard lockdown, the hotel’s two housekeepers were redeployed as duvet makers.

“We had to let our two staff members go with the initial level five lockdown. In that time we sold, I think it was about ten duvets, of which we basically did everything ourselves. But as the orders started picking up, we said to them: ‘Ryna, Jacqui, okay come back!’ We were like: ‘Masks on, here is the hand sanitiser.’ We were observing all the protocols.”

“Actually, all we’ve done is to launch a little Facebook page,” says Williams, modestly. “Our Facebook page, it’s not really a marketing thing. We just tell our story, you know, for example how we only switched off the sewing machines at one o’clock in the morning. It’s more to take people along on our journey. I launched the website too, which I built myself because that was my background before going into hospitality. I was service delivery manager for the Standard Bank Group; my team built all their websites across the globe. So I have a bit of web design experience.”

Their duvets, available in different sizes and weights, are priced between R750 and R8,100.

“So right now we have Ryna and Jacqui working every day,” says Williams. “Then with big orders, we bring in one or two temp ladies. The wool comes in these long, long strands that we have to separate, pack into little parcels and then put onto an industrial scale. So it’s very labour intensive. Obviously, I’m in the factory, I do all the sewing myself. We’ve really honed our process now. We used to be able to get one duvet out every three days, now we’re doing four duvets in a day. And, Lionel, before he joined me in the hospitality business, was with Discovery Health as their training coordinator handling logistics behind all their training. So, for our new business, he does the admin — the orders, the packaging, liaising with the couriers, ordering all of our supplies, and so on. Basically, he’s our admin backbone.”

How did they manage to be successful, so quick? Williams pauses to think, taking a drag on a menthol cigarette.

“Well we’re one of three wool duvet providers in South Africa, the others are in Cape Town and Chrissiesmeer,” he says. “Clients say their allergies have disappeared. They’re not sweating anymore. Basically it’s just down to the product, I think.”

Surrounded by arid plains and koppies, Richmond is a seven and a half hour drive from Joburg and seven hours from Cape Town – the perfect cross-country halfway stop, says Williams.

“Look, we rely predominantly on passing trade from the N1,” he says. “We’ve got a whole lot of guest houses here and it decimated them. I don’t know if some of them are going to open again. It’s been really, really tough.”

In the far-flung town, Karoo Creations has become a beacon of inspiration; an example of entrepreneurial pivot in a time of economic collapse. While bookings at the Richmond Karoo Small Hotel are picking up again, the husband-team remains committed to their budding wool duvet business.

During the interview, Williams refers to sustainability several times. No sheep are harmed in the making of their duvets, he says.

“Sheep have to be shorn once a year, especially here in the Karoo with the [high] temperature,” he explains. “Obviously it’s done by hand. And what a lot of people don’t realise is this: the shearer, as soon as they nick a sheep or give a sheep a cut, that fleece cannot be used because of the blood that’s on it. So it actually affects the shearer’s pocket if he hurts the sheep, as the farmer will not pay for that wool. So given that their pocket is affected, they go for quality instead of speed.”

He adds that many of the local shearers are trained at the Herding Academy, South Africa’s only sheep-shearing school funded by the billionaire Rupert family near Graaff-Reinet, 130km to the south.

Richmond consists of a few restaurants and guesthouses; a Spar, a bottle store, a hardware store and a Standard Bank, clustered astride an underground river next to the N1. This is slow living.

“It’s a very different type of life,” says Williams. “When you take a walk to the Spar, which is about 200m away, it takes an hour because everybody stops to talk. You sit and have a coffee with this person on their stoep, then you see that person in the street, then you bump into another person at the Spar.

“The town was established in 1847, so it’s a very old town with all of that beautiful Karoo architecture. I mean Loop Street, which is sort of the main street, has beautiful gentrified houses and restaurants. We’ve got the Vetmuis Plaaskombuis, which is right next door to our hotel. They offer traditional Karoo food, absolutely stunning gifts and beautiful confectionery, and just amazing service. Then we’ve got Die Krip Restaurant, an old horse and cow barn. So when when you sit at the bar there you’re actually sitting on old horse saddles, and it’s got the original crypt where the cows used to eat.”

Williams points out that the town’s NG Kerk is believed to have the most elevated pulpit in South Africa. “When our dominee preaches on Sundays, he is the highest dominee in the country,” he says, laughing. The dominee, Theo Badenhorst, happens to be the father of Afrikaans rock star Francois van Coke. Badenhorst moved to Richmond shortly after Williams and Millard.

It was a tragedy that sparked the couple’s move into the Karoo. Two years before, criminals held up a wedding party at their luxury lodge on Johannesburg’s West Rand. It was time for change. Now both their parents are moving to Richmond, too.

“Obviously our first few months here was epically stressful,” says Williams. “It was an adjustment and the hotel was very damaged. But now that we’re into this way of life, I honestly would not change it for the world. Even going to Graaff-Reinet for shopping, when we go through a traffic light and there’s a bit of traffic congestion, I get stressed out! I get stressed out with the crowds.”

Richmond has changed the couple’s priorities. “There’s no such thing as ‘Ooh, who’s wearing what and, ooh, who’s driving what car?’ Look, it might not be for everybody. But I think when you hit that midlife crisis in your forties, this is the life,” says Williams. “It’s totally blissful.” DM/ ML/ MC