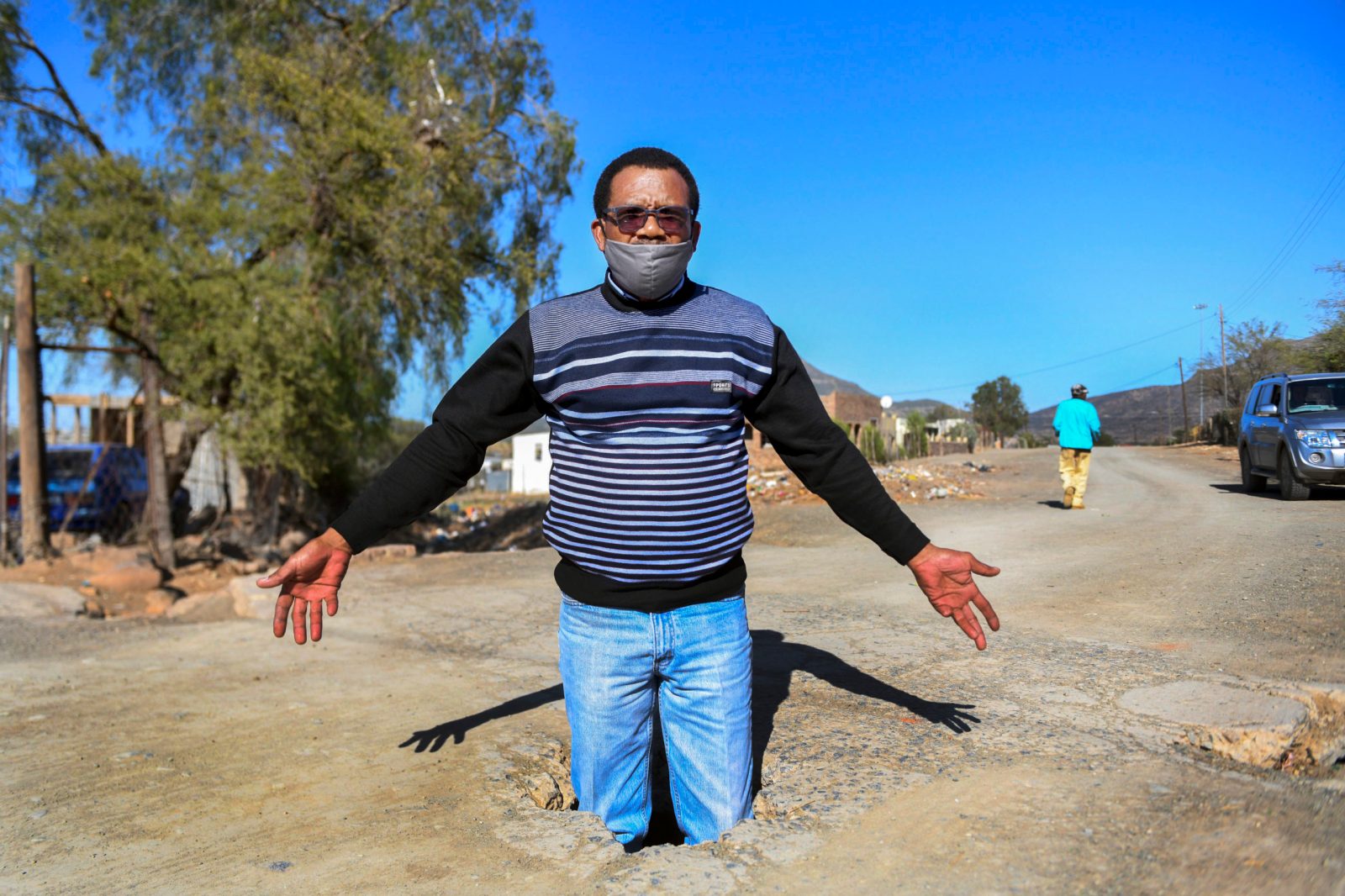 In what resembles a bad cut and paste job, an analysis of the Dr Beyers Naudé Local Municipality’s annual reports since 2016 has shown that little progress has been made in improving the region’s roads — with potholes in the dusty streets of the Karoo town Graaff-Reinet becoming the stuff that legends are made of.

From small children to teenagers and old people, all know the pothole in Merino Street in Kroonvale, a suburb of Graaff-Reinet. From a small crack in the road, it has now become so wide and deep that a grown man can stand in it. For many residents it has brought an evening of praise and worship at a nearby church to an abrupt halt, many have fallen into it, several were badly injured and many car tyres have been destroyed by it.

“It is completely unacceptable,” community leader Sias Smith said. “This pothole was reported in October last year (2019). It was a small pothole back then.”

The Merino Street pothole is one of many in Graaff-Reinet.

“We came here in 1975. The dust roads are still here. Not a single road has been tarred since I moved in here,” he said. “Boog Street still looks the same… When it rains, the road gets so bad that people have to drive on the pavement,” Smith said.

Juanita Holland, who was paralysed after being shot in the back, said the many potholes made it difficult for her to get around in her wheelchair.

In a petition to the Mayor of the Dr Beyers Naudé Local Municipality Deon de Vos, delivered in March, the Action Committee for the Southern Areas, Kroonvale and Vrygrond asked for improved road services.

This came after the municipality began a project in Kappertjie Street, Booi Nompondo Street and Vygie Street – but then stopped.

“It has become difficult for residents to leave their homes,” the petition said.

In its response, the municipality said that upgrading roads and stormwater drains was a high priority.

“But it is important to mention that funds are limited and that it will not be possible to build and complete all the streets in one year. Ninety percent of all the streets in the Dr Beyers Naudé Local Municipality need upgrading,” the municipal answer reads.

The municipality ignored several requests to answer questions on the upgrading of roads in Graaff-Reinet.

In a Facebook post, however, De Vos said road projects for the 2019/2020 financial year could not be completed because of the Covid-19 lockdown.

“Roads projects for the year 2020/21 include paving of Booi Nompondo in Ward 14, Top Street in Ward 4, Vygie and Kappertjie in Ward 3. These were projects planned for 2019/20 year but due to Covid-19 lockdown, these could not be completed. Currently, potholes are also being attended to in all areas,” De Vos said.

The two annual reports issued for 2016/2017 and 2018/2019, however, paint an almost identical picture of roads in the municipality, that also includes Nieu-Bethesda, Jansenville, Steytlerville and Klipplaat.

According to the two reports, there were 198km of gravel roads in the municipality and 114km of tar roads, and these were all “maintained.”

The original 2016/2017 report, which came under severe criticism from the Auditor-General, stated that the municipality was paying R18.9-million in salaries for employees maintaining roads. In the latest annual report, this figure remained mainly unchanged — with the municipality saying it is spending R25-million on roads as “total operational expenditure”.

Lynne Moseley of the Graaff-Reinet Ratepayers’ Association analysed both reports and in a letter to the municipal manager and De Vos, questioned how the municipality could claim that all households in the municipality had access to roads and stormwater drains.

“A hundred percent for roads and stormwater drainage is totally implausible. Stormwater drains are never even cleaned, let alone repaired, and there are many roads that have not had any attention for years.”

Moseley said the report was incomplete and inaccurate.

“Several statements are superficial, unsubstantiated and riddled with the same old excuses brought out annually.”

“What is really staggering is that the draft annual report for 2018-2019 was adopted by the council on 31 January 2020. How can a document so marred with inaccuracies pass the scrutiny of the brains trust of the Dr Beyers Naudé Local Municipality?”

In its Integrated Development Plan, the municipality says it must develop a master plan for roads management, but needs money for this.

The plan also says the municipality must make “adequate provision for street maintenance in the operational budget as this is currently done during ward-based planning.

“The systematic upgrading of gravel roads by means of labour-intensive methodologies as implemented under the Expanded Public Works Programme has created much-needed job opportunities, for example, concrete paving bricks were utilised instead of conventional methods of pavement surfacing,” the report said.

“Many are of the old Macadam surfacing technique and are badly cracked as the binder has dried; resulting in potholes forming every time it rains. Many roads have reached their useful life and extensive re-construction is required. Maintenance on district roads (gravel) needs to be undertaken on a continual basis. Funding for the development of a Roads Management System as well as an Integrated Transport Plan is required. All households have access to a minimum level of service.”

“The major strategies are: To develop a roads management system (master plan) of all urban roads in order to determine the extent as well as a maintenance plan. Funding is however required to identify and implement suitable projects. This is done annually based on ward-based planning of the IDP Process. Wards identify projects according to their needs. To make adequate provision for street maintenance in the operational budget… The successful systematic upgrading of gravel roads by means of EPWP principles using concrete paving blocks instead of conventional surfacing, is creating much more job opportunities. Surfaced roads require urgent resealing. Many are of the old “Macadam” surfacing technique and are badly cracked as the binder has dried; resulting in potholes forming every time it rains… Funding for the development of a Roads Management System as well as an integrated Transport Plan is required. All households have access to a minimum level of service.” MC