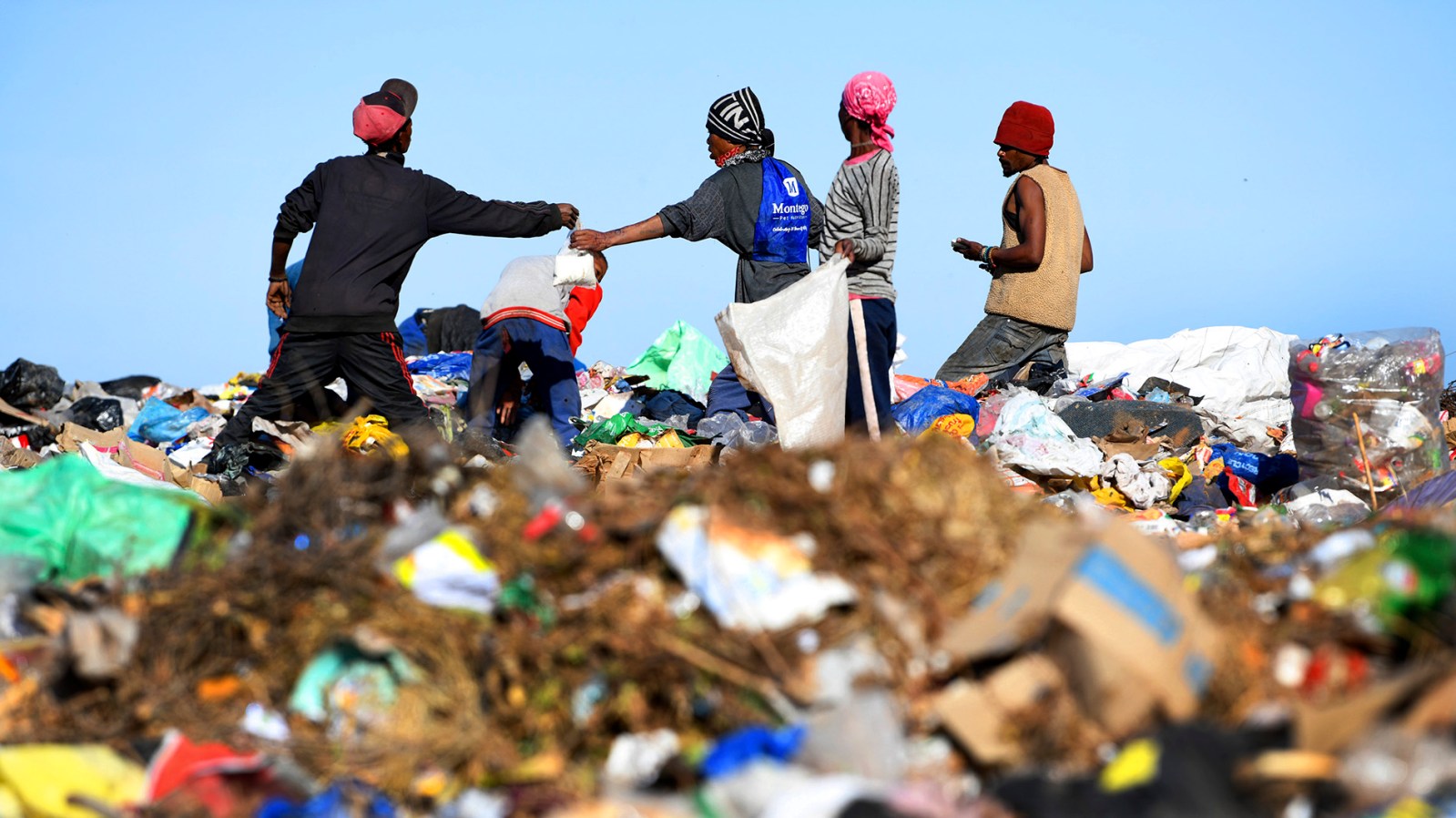 Waste pickers at the municipal dump in Graaff-Reinet with no municipal official in sight. (Photo: Theo Jephta)

With its waste transfer station being closed for 18 months, and the official landfill technically full, rubbish and plastic bags are piling up near Graaff-Reinet with no municipal officials in sight, no official plan to deal with waste and little control over what gets dumped. Officials have also admitted that illegal dumping has spiralled out of control, and have promised a clean-up campaign.

With rubbish littering the streets of many of its suburbs, a waste site plagued by fires with nobody on duty there and hazardous waste permits being issued but not controlled, municipal waste services in the Dr Beyers Naudé Local Municipality seem to have descended into disarray.

Sidewalks in Kroonvale, Asherville, Santaville, Riemvasmaak, Vrygrond and Umasizakhe are littered with rubbish including medical masks, mattresses, hundreds of plastic bags, broken bottles and human waste in some instances.

Only informal waste pickers work at the waste site where no municipal official and no security guards were visible during Maverick Citizen’s visit.

The new landfill site, complete with an office and gate for access control, was completed 15 months ago in a joint project between N1 Construction, the Graaff-Reinet Economic Development Forum and the municipality.

The office has since been vandalised and no municipal officials were on duty.

Despite being given more than a week to answer questions on the seemingly chaotic waste services, or lack thereof, municipal officials have not responded, but Mayor Deon Vos on Friday published a Facebook post insisting that a “massive clean-up operation has been launched… All areas in towns will be cleaned and awareness campaigns have commenced together with Covid-19 awareness to ensure communities are educated in keeping their environments clean, stop littering, and report illegal dumping while it is happening.”

“Unfortunately, this is the second clean-up operation for the year, and it is disheartening to notice that residents are still not keeping their areas clean. The cooperation of the communities needs to be obtained to stop this cycle of pollution, which is not only an ugly sight, but poses a health threat to humans and animals.

A waste transfer station just outside town was closed in February 2019 after municipal waste piled up and the municipality did not remove it.

Graaff-Reinet Recycling, a private company, pays waste collectors for recyclable material they collect at the landfill.

In the municipality’s annual report the following is stated:

“All of the towns are experiencing problems with the management of their landfill sites. Some do not have the vehicles or machinery to compact and cover the waste, which is meant to be done on a regular basis; other sites are not properly fenced and paper and plastic bags cannot be contained within the sites during strong gusts of wind. Most towns do not have staff on site.

“Whereas in the past the municipality rendered a service of removing garden refuse and building rubble, these services are no longer available and some community members are dumping this refuse and rubble wherever they please. Many households are unable to store their waste, due to lack of suitable refuse containers; some areas are prone to littering and illegal dumping; resulting in unhygienic and hazardous conditions. A few of the remote settlements do not have proper waste management in place,” the report said.

The municipality admits in its latest integrated development plan that it must develop a new Integrated Waste Management Plan for Dr Beyers Naudé Local Municipality and review it regularly.

“A few years ago, the Munniks Pass landfill outside Graaff-Reinet was decommissioned and rehabilitated and a new one was constructed a little further away, south of Adendorp towards Kendrew. It was taken into use upon the completion of a waste transfer station, just off the N9 next to Wolwas,” this report says.

“The new landfill site contained only one cell and reached full capacity in a very short space of time. More cells are required. The waste transfer station requires redesign and extension for incorporation of proper recycling facilities; currently the bulk of recyclable material is ending up at the landfill site, exacerbating the existing problem. The public feels the municipality should be playing a more prominent role in recycling initiatives and lead by example,” the report says.

Henlein Bertram, who runs a business collecting and removing waste in Graaff-Reinet, said as municipal services deteriorated he could see an increase in demand for his business.

“The waste transfer station started about four years ago, but closed two years later. The municipality did not have enough trucks to remove the waste to the landfill and after a while, rubbish had piled up as high as the roof of the waste transfer site’s offices.

He said business tries to recycle where it can and drops off plastic, glass, steel and paper at Graaff-Reinet Recycling.

“The landfill is far out of town so there is a lot of illegal dumping. It is not being managed well,” he said.

“After N1 Construction cleaned up the landfill site it was so clean. But now it is so bad some days that you can’t even enter the landfill. We have had regular fires at the landfill. One time a bulldozer burnt (out),” he said.

“You almost never see a municipal official there,” Bertram said. “Anyone can dump anything there. If I have to dump hazardous material, like old dog food or maybe rotten fish, the municipality will give you a permit, but there is nobody to supervise.

“My one driver was attacked at the landfill the other day. He was stabbed with a knife. You do sometimes see a security firm there, but not always.”

Juanita Holland, who lives next to an open field in Graaff-Reinet, said for a long time there had been no clean-up operations and no prevention of illegal dumping.

“I see they have started cleaning up recently,” she said.

Holland, who is in a wheelchair after being shot in the back, said everything blows into her yard.

“If you go to the municipality, they treat you with contempt. Things are dumped in that field that is very dangerous for the children in our community. They have even found dead, rotting animals there.

“I have given up hope that they will get this right. Sometimes they don’t come to fetch the rubbish at all. I think the only thing that helps is if you go there and cry,” she said. DM/MC