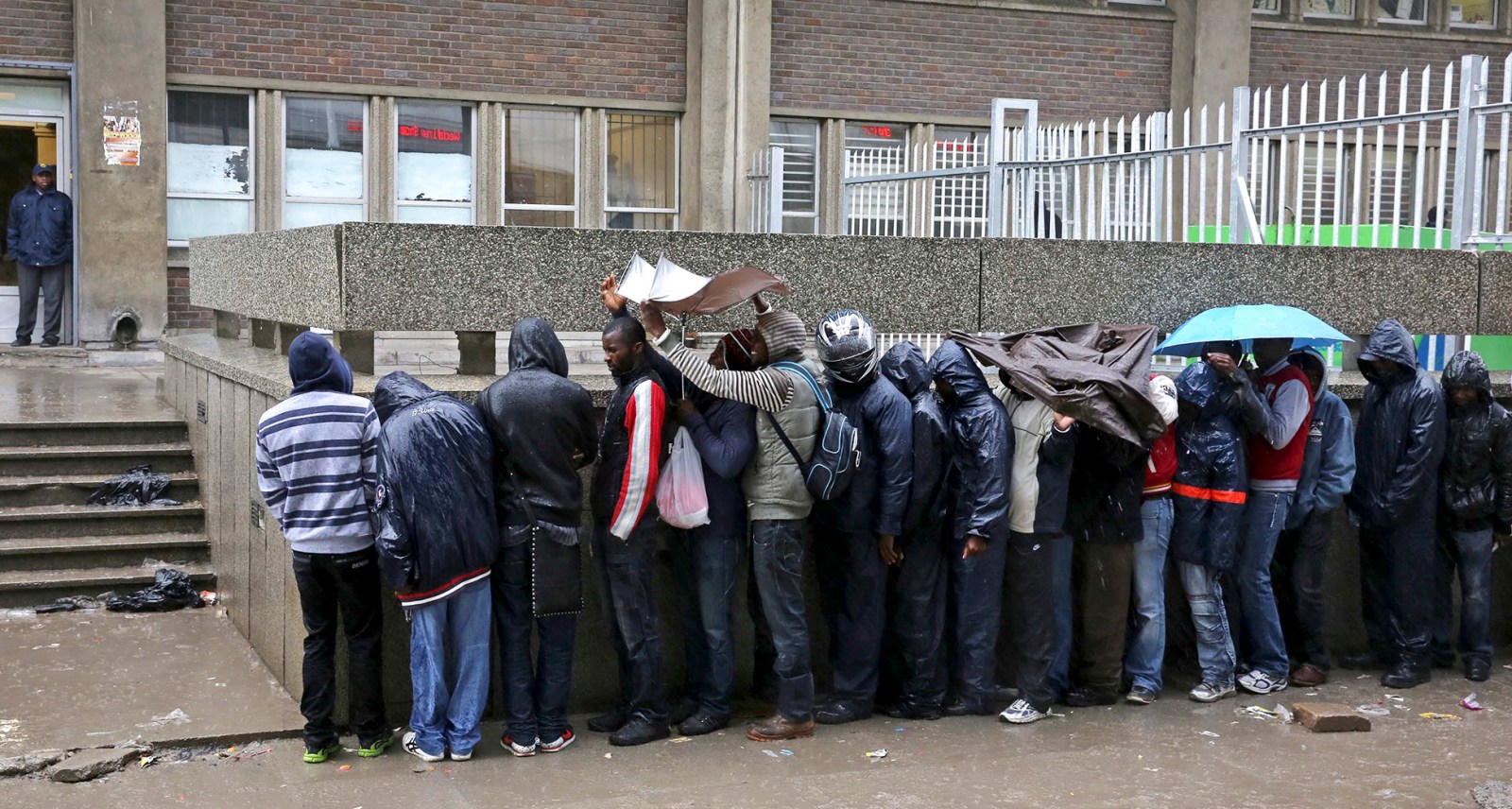 Asylum seekers queue outside the Customs House building in Cape Town. As of May 2020, it was estimated that there were 188,296 active asylum files and 80,752 recognised refugees in South Africa. (Photo by Gallo Images / Nardus Engelbrecht)

The report shows how corruption is endemic in the South African Home Affairs system, as well as the various players that perpetuate it, such as the police, and metro and Home Affairs officials.

Singh said it was important for corruption to be understood against the backdrop of the rule of law and what it meant in a constitutional democracy. He said that the issue was about systemic governance weaknesses when it came to asylum seekers and that there was a need to intensify advocacy and law reform. Singh suggested that Home Affairs needed to strengthen its internal integrity systems. “We sit with a deep accountability deficit,” said Singh.

According to the report, “Corruption has historically posed a substantial challenge to the implementation of the Refugees Act – and thus to the wellbeing of refugees and asylum seekers themselves. The systemic failures in implementation of the Refugees Act and limited capacity within the DHA [Department of Home Affairs], have therefore rendered the system vulnerable to abuse – by both desperate asylum seekers as well as by officials seeking to take advantage of this vulnerability. As a result, many people seeking asylum cannot secure proper documentation, resulting in their displacement and increased vulnerability to exploitation.”

The report said that as of May 2020 it was estimated that there were 188,296 active asylum files and 80,752 recognised refugees in South Africa. It went on to say, however, that because of barriers in the system and Refugee Reception Offices (RROs) being closed as a result of the Covid-19 crisis, there were likely to be more refugees and asylum seekers in the country. The main focus of the survey was the interaction of respondents with the South African Police Service (SAPS), their experience at RROs and their general South African experience over the past five years.

The report’s research was conducted through surveys of 263 people aged 15-60, the majority being 26 to 30 years old, with males representing 63% of the group. The surveys were conducted in Johannesburg, Pretoria, Cape Town, Durban and Musina, and the respondents were predominantly from the Democratic Republic of Congo and Ethiopia. When crossing the borders (which is where the asylum-seeking journey begins), 10% of respondents reported being asked for bribes by border officials to gain entry into South Africa. The amounts ranged from R700 to R2,500.

The report explains that immigration officials are required to give refugees crossing into SA a five-day asylum transit permit to grant them time to get to an RRO and apply for asylum. Those who enter the country unofficially are under law protected from arrest if they declare they are seeking asylum and are supposed to go to an RRO immediately. However, 11% of respondents said they had been arrested by the SAPS for not having correct documentation before they were able to get to an RRO, despite being protected by the Refugees Act.

Respondents also reported that there were impediments to getting into RROs, such as security guards not letting them in without a bribe, very long queues and interpreters soliciting bribes. Once respondents made it into the RROs, Home Affairs officials accounted for 62% of the bribery soliciting.

The fact that asylum seekers have to return to RROs every three months to renew their documents made them vulnerable to police harassment when they were found with expired documentation. Thirty-five percent of respondents had to make multiple attempts to enter the reception offices – one respondent reported trying for three years. Respondents were required to pay fines for lost or expired documents or face arrest.

During the discussion, Gander said that the report could be used as a tool to assist with the effective implementation of the Refugees Act, which would help Home Affairs discharge its asylum-seeker duties effectively.

Gander mentioned that although the number of applications seemed to have dropped since 2014, this was not because people were no longer seeking asylum, it was because they were frustrated by the barriers in the Home Affairs system. She said that there needs to be amnesty for people who have been trying and failing to get documentation for five years through no fault of their own.

The report said that Home Affairs’ massive backlog created fertile ground for corruption. Its key recommendations were for:

The report also recommended the establishment of a safe and easy way for people to be able to report corrupt officials and the creation of an independent body to deal with this corruption.

Closing the discussion, Ekambaram said that acts of xenophobia cannot be separated from the failed asylum system and that the call for strengthening institutions of democracy was not only for refugees and migrants, but that it is also about South Africans. DM/MC