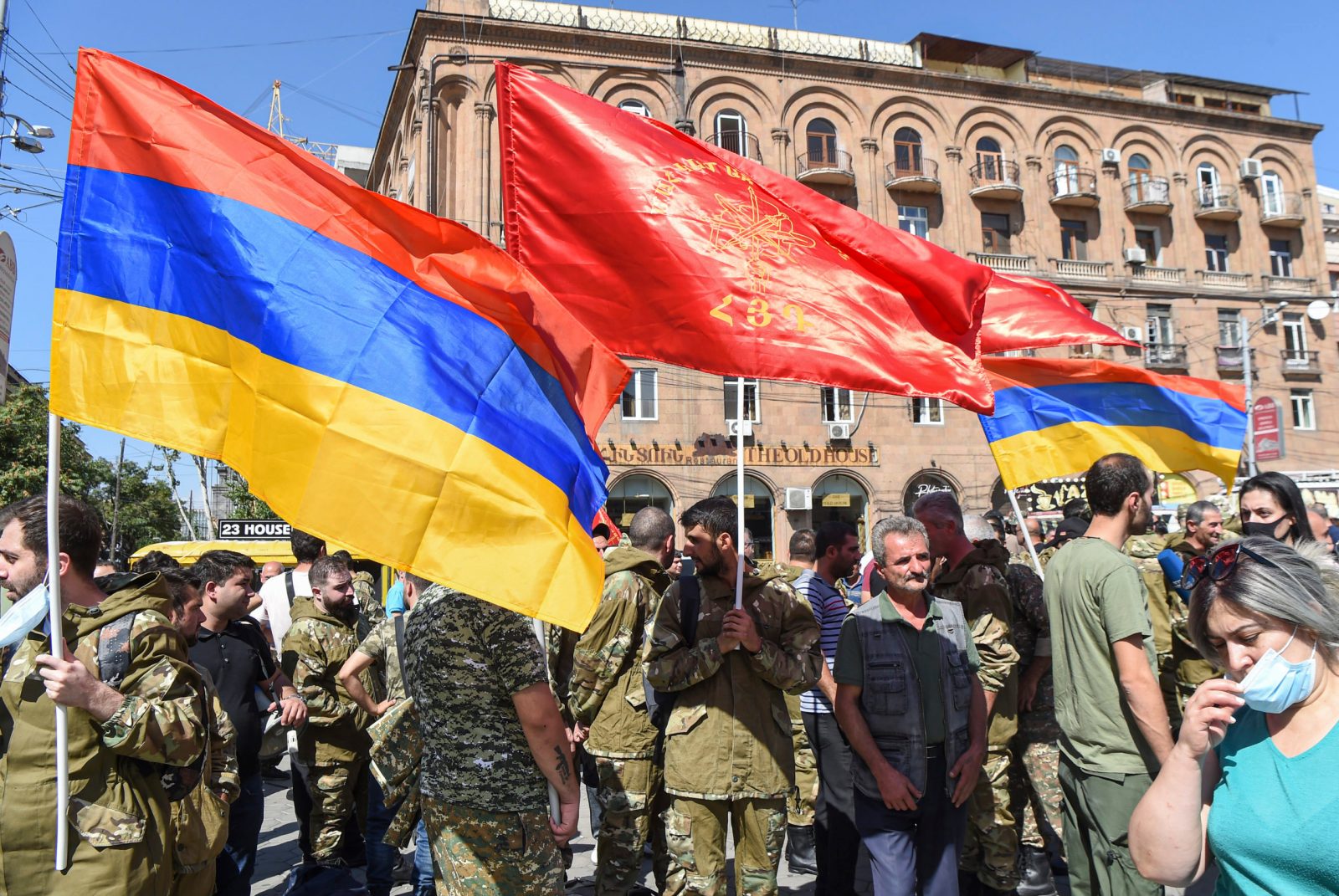 epa08700769 Volunteers of Armenian Revolutionary Federation gather to leave for Artsakh (Nagorny-Karabah region), where martial law has been declared near Aram Manukyan?s statue in Yerevan, Armenia, 27 September 2020. According to media reports, Armenia has imposed martial law and total military mobilisation after clashes have erupted in the territorial conflict between Armenia and Azerbaijan in Nagorno-Karabakh Republic, with both sides reporting civilian deaths after shelling, artillery and air attacks along the front. EPA-EFE/MELIK BAGHDASARYAN

YEREVAN/BAKU, Sept 28 (Reuters) - At least 21 people were killed on Monday in a second day of heavy clashes between Armenia and Azerbaijan over the territory of Nagorno-Karabakh that reportedly involved air power, missiles and heavy armour.

The fiercest fighting in years between the two former Soviet republics has revived concern over stability in the South Caucasus, a corridor for pipelines carrying oil and gas to world markets.

Any move to all-out conflict could drag in major regional powers Russia and Turkey. Moscow has a defence alliance with Armenia, while Ankara backs its ethnic Turkic kin in Azerbaijan.

Angela Frangyan, a documentary film maker living in the Nagorno-Karabakh capital Stepanakert, said residents had taken cover in bomb shelters and constant shelling could be heard. All shops were closed and hardly anyone was in the streets, she said.

Majority Christian Armenia and mainly Muslim Azerbaijan have come to blows periodically in their decades-long conflict over Nagorno-Karabakh, a breakaway region that is inside Azerbaijan but run by ethnic Armenians.

Turkey’s President Tayyip Erdogan demanded Armenia immediately withdraw from Azeri lands he said it was occupying and said it was time to end the Nagorno-Karabakh crisis.

Armenia’s parliament condemned what it said was a “full-scale military attack” by Azerbaijan on Nagorno-Karabakh that was receiving Turkey’s help, adding Ankara’s involvement could risk destabilising the region. Azerbaijan denied Turkey was taking part in the fighting.

“Missile, artillery and air strikes are being applied to the enemy’s positions, which forces the enemy to surrender the held positions,” he said, adding that several important strategic heights around Talish village had been taken.

Evyazov also said Lernik Babayan, commander of the Armenian military’s airborne assault battalion, had been killed near Talish. It was not immediately possible to verify the report.

The clashes have spurred a flurry of diplomacy.

China urged both sides to show restraint. Russia called for an immediate ceasefire and Turkey said it would support Azerbaijan.

Under international law, Nagorno-Karabakh is recognised as part of Azerbaijan. But the ethnic Armenians who make up the vast majority of the population reject Azeri rule.

They have run their own affairs, with support from Armenia, since Nagorno-Karabakh broke away from Azerbaijan in a conflict that erupted as the Soviet Union collapsed in 1991.

Although a ceasefire was agreed in 1994, Azerbaijan and Armenia frequently accuse each other of attacks around Nagorno-Karabakh and along the separate Azeri-Armenian frontier.

(Reporting by Nvard Hovhannisyan in Yerevan and Nailia Bagirova in Baku; writing by Tom Balmforth and William Maclean; Editing by Mark Heinrich and Gareth Jones)