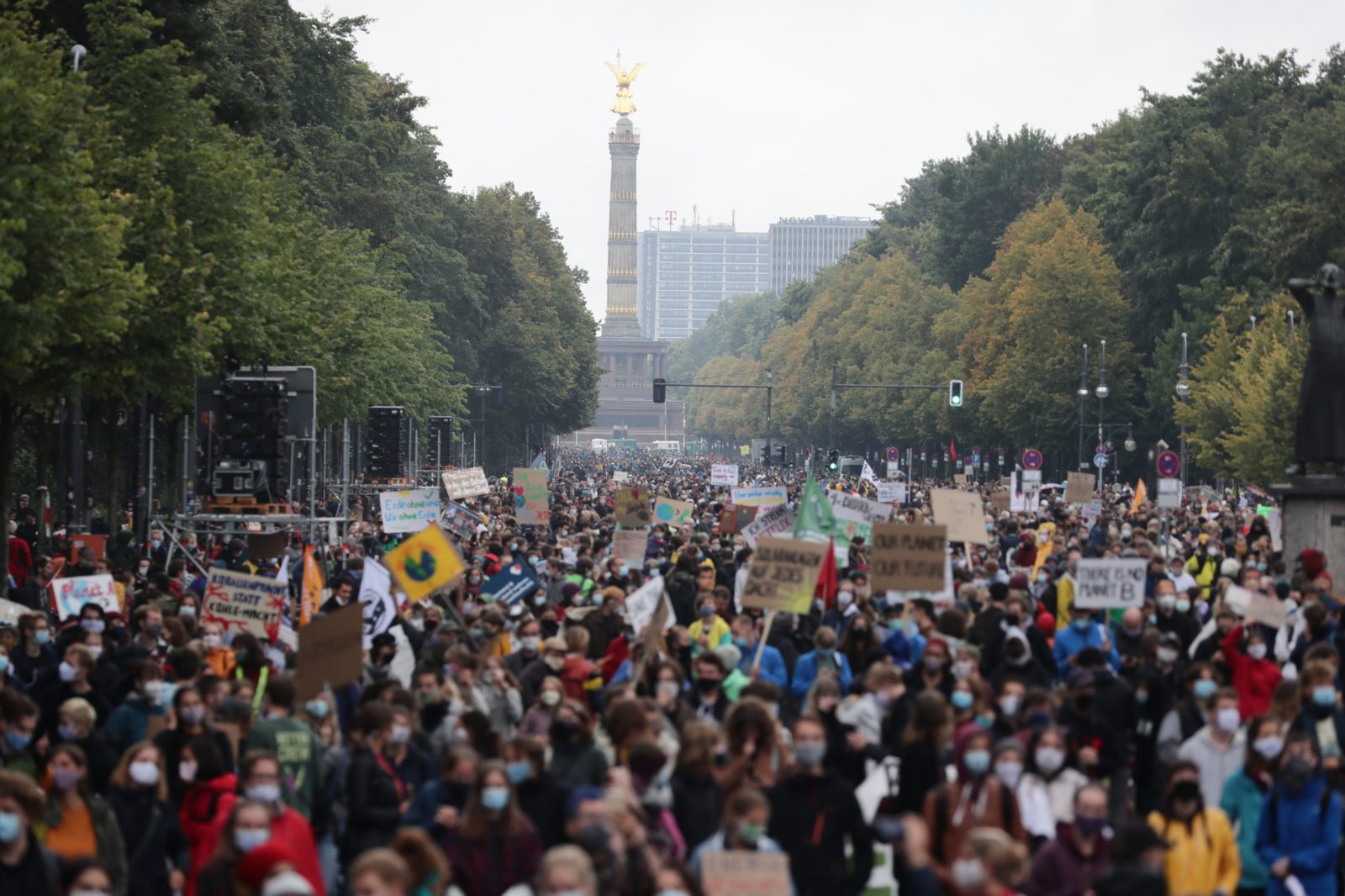 epa08696094 Supporters of school strike movement Fridays For Future demonstrate during the global climate action day in Berlin, Germany, 25 September 2020. According to a press release of the organization it is the first global cation day in 2020, due to the Covid-19 pandemic larger protests were inappropriate earlier this year, Fridays For Future stated. EPA-EFE/HAYOUNG JEON

With wild weather wreaking havoc across the world – from fires ravaging the U.S. West, to abnormal heatwaves in the Siberian Arctic and record floods in China – organisers said their aim was to remind politicians that, while the world focused on COVID-19, the climate crisis was more acute than ever.

Demonstrations were planned in more than 3,100 locations, though with pandemic-related curbs limiting the size of gatherings, much of the action shifted online.

In Stockholm, Thunberg and a handful of members of her group, Fridays for Future, assembled outside parliament with signs bearing slogans including “Stop Denying the Climate Is Dying”.

A year ago, two global strikes drew more than six million people pour onto the streets, in what organisers said was the biggest climate mobilisation in history.

For Friday’s protests, participants were asked to post pictures on social media and join a 24-hour global Zoom call – though mass gatherings were expected in Germany, notably Hamburg, where a court overruled a bid by local authorities to limit numbers, paving the way for more than 10,000 to attend.

ON THE FRONT LINES

Friday’s focus was on communities that have contributed little to greenhouse gas emissions, but are on the front lines of devastating climate threats including violent storms, rising seas and locust plagues.

In the Philippines, Mitzi Jonelle Tan, a 22-year-old Fridays for Future activist, said recent flooding had wiped out a local COVID-19 testing centre and caused a tree to fall on her home.

Her government was failing to protect people from both climate change and the coronavirus. “They are still prioritising the rich over the poor, they are still not listening to the science,” she said.

People in the global South were dying because of climate change, said 19-year-old Belgian activist Anuna De Wever ahead of a planned protest in a Brussels square.

“As one of the richest continents, we (Europeans) have the biggest responsibility to fight climate change in the most ambitious way possible.”

Mya-Rose Craig, an 18-year-old Briton, travelled to the Arctic – one of the world’s fastest warming regions – with Greenpeace to stage the most northerly protest on an ice floe.

In Germany, large numbers were scheduled to gather in Berlin and Bonn as well as Hamburg.

In the capital, where police had said they also expected 10,000, protesters cycled in groups to Brandenburg Gate. Hundreds sat in face masks, observing social distancing and chanting: “Strikes in school, university and companies. That is our answer to your politics”.

Activists in Bogota, Colombia, said they would use the event to urge their government to ratify the Escazu Accord, enshrining protections for those working on environmental justice.

In Australia, thousands of students earlier took part in about 500 small gatherings and online protests, to demand investment in renewable energy and oppose funding for gas projects.