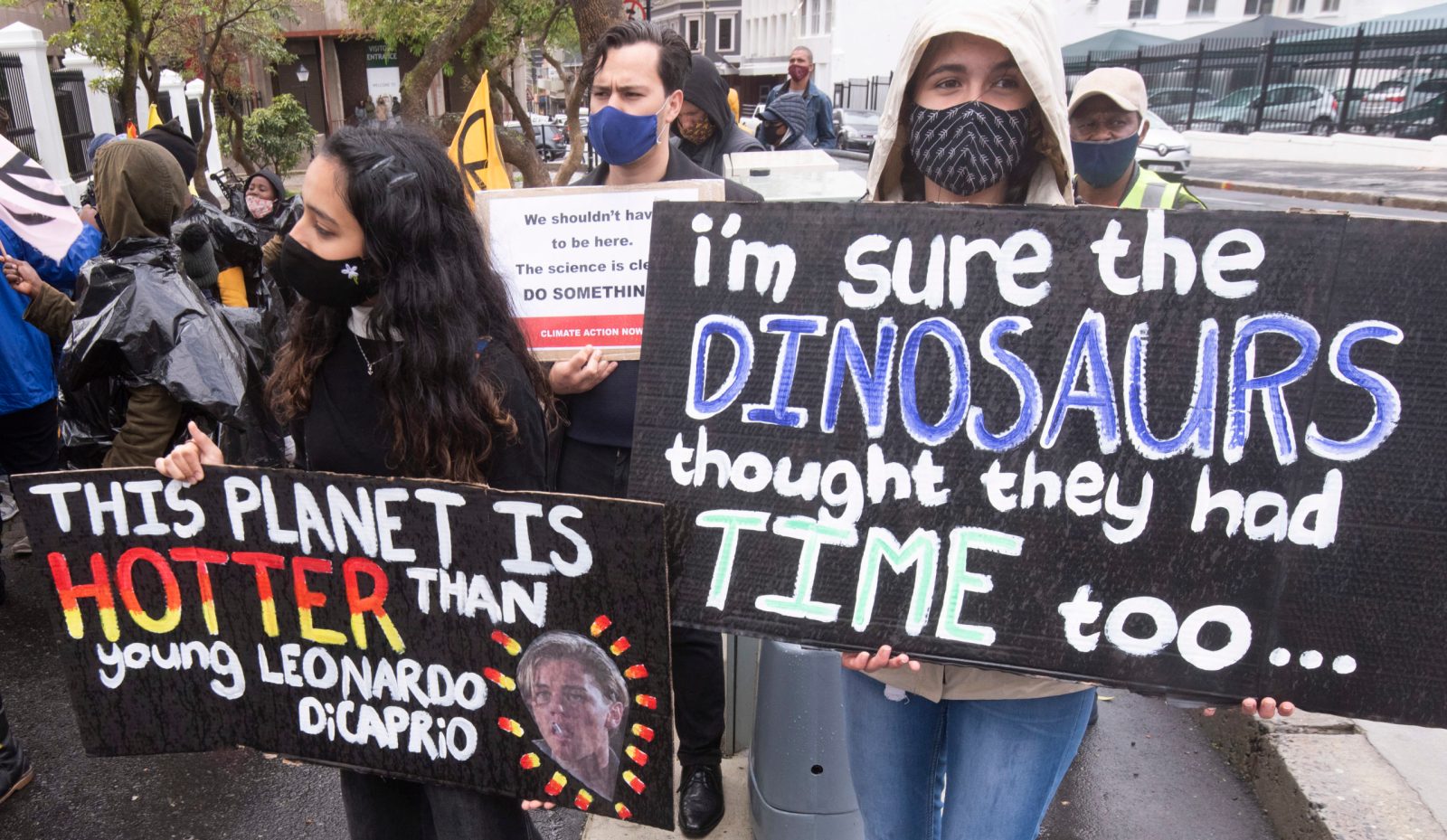 A small crowd gathered in the rain infront of parliament for the 6 th global climate strike calling for climate action and climate justice as well as an end to the social injustices .Picture Brenton Geach

In cities around South Africa, young people gathered to demand climate justice as part of a global climate strike. They are calling for a green, new Eskom which favours renewable energy and protection for vulnerable communities who may be disadvantaged by the shift from fossil fuels.

Young people across the country took to the streets on Friday to join the sixth global climate strike. The protests, organised by Fridays for Future, a climate justice movement sparked by Swedish activist Greta Thunberg in 2018, are the movement’s first major protest in 2020.

Strikes were announced in about 3,000 locations around the world including Germany, the Philippines, Australia and Sweden.

In South Africa, protests demanding “climate justice and a just recovery from the Covid-19 pandemic” took place in Tshwane and Cape Town, with additional protests announced for Durban, Port Elizabeth, Klerksdorp, the Harmony Gold Mine in Welkom and outside the Medupi Power Station in Limpopo.

Climate Justice Coalition – the organisers of the local pickets – are a collective of over 20 union, civil society, and community-based organisations.

The coalition put forth a list of demands to the government centred on the call for a “green new Eskom”, for which a campaign was recently launched. The list of 17 demands includes:

“At the core of the campaign is the demand for a just transition to a more socially owned, renewable energy future, providing clean, safe, and affordable energy for all, with no worker and community left behind,” the document read.

Alex Lenferna, one of the organisers of the Tshwane demonstration, said the memorandum of demands was handed over to the Department of Mineral Resources after protesters had marched from the Union Buildings. From the Department of Mineral Resources, the group moved to the Ministry of Finance to deliver a separate memorandum “calling for investment in the low-carbon infrastructure that we need and also into our communities who are facing the brunt of climate change”, said Lenferna.

In Cape Town, close to 100 young people gathered in the rain outside Parliament. Some held placards which read, “We shouldn’t have to be here. The science is clear. Do something”, and “Respect existence or expect resistance”.

Organiser Gabriel Klaasen from the African Climate Alliance (a member organisation of the council) called on the government to take ambitious climate action:

“We can no longer have an economy powered by coal, which drives gross inequality when coal generators continually fail, waste water, pollute the air and emit CO2,” he said.

Speaking at the event, 19-year-old Valentino de Klerk from Elsies River, called climate change “an emergency”: “It’s been predicted that in the future there won’t be a world if we don’t do something about it now. There won’t be for us a future and for our children.”

De Klerk is from the working-class suburb Elsies River. His younger brother, Geronimo felt that poorer communities like Elsies River bear the brunt of pollution and other environmental issues.

Other protests in Cape took place outside the Isivivana Centre in Khayelitsha and the Little Wood Primary School in Mitchells Plain.

A digital climate strike was also held, where participants posted photos and videos in solidarity using the hashtags: #SystemChangeNow, #ClimateActionNow, #SystemChangeNotClimateChange and #FightClimateInjustice.

The memorandum raised concerns that the Risk Mitigation Independent Power Producers Procurement Programme is designed in a way to favour fossil fuels over renewable energy. The programme is meant to procure roughly 3,000 MW of electricity to assist Eskom with its supply shortages.

Further concerns were raised that the Integrated Resource Plan for Electricity did not make sufficient provisions for renewable energy but rather favoured coal. “It does that despite coal being more expensive and polluting options  – despite the climate science being clear that we cannot afford new fossil fuel infrastructure,” the document read.

Last year the Global Climate Strike was held from 20 – 27 September, ahead of the United Nations Climate Action Summit in New York. It was the biggest climate strike in history where over 7,6 million people gathered around the world. DM