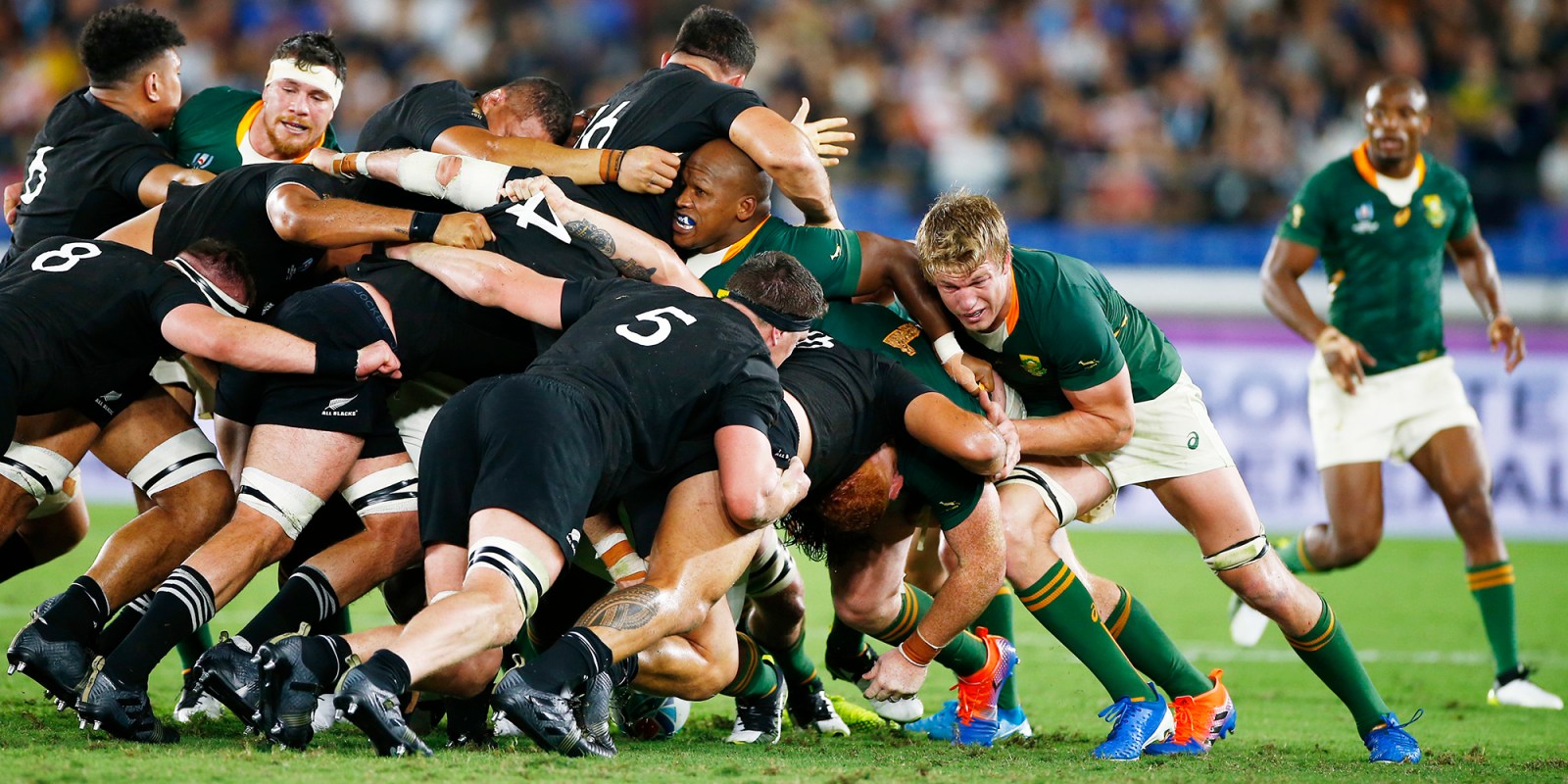 It looks increasingly likely that the Sanzaar alliance will collapse after 2025 if SA Rugby’s ambition to have the Springboks play in the Six Nations is realised. (Photo by Steve Haag/Gallo Images)

The 2020 Rugby Championship schedule was released on Thursday, but it is far from guaranteed that the Springboks and the All Blacks will be in Australia for the tournament.

South Africa, New Zealand, Australia and Argentina Rugby (Sanzaar) has become an increasingly toothless organisation that exists in little more than name. Sanzaar is a membership body and most of its members are doing their own thing.

On Thursday a press release from Sanzaar landed with optimism in inboxes across the world, detailing the Rugby Championship schedule. Brisbane, Newcastle and Sydney will host the southern hemisphere’s most important tournament in a Covid-19 safe biobubble. But before anyone could crack open the bubbly, New Zealand Rugby (NZR) expressed unhappiness, while SA Rugby maintained stony silence.

“It has taken a lot of hard work to get to this point, but we are delighted that we can now confirm the match dates and venues for the Rugby Championship 2020,” said Sanzaar chief executive Andy Marinos.

“The six double-header Saturdays are a first for the tournament and will produce an exciting feast of rugby for spectators at the venues who will actually be getting two world-class international tests for the price of one entry ticket. Thanks to our committed family of broadcasters, this action will also be delivered to the living rooms of our overseas rugby fans, providing a rugby feast similar to what we experienced a year ago with the rugby World Cup.”

The NZR, which has basically withdrawn from Sanzaar and going it alone, declared unhappiness with the schedule, which starts on 7 November and ends on 12 December. Sanzaar appears to have drawn up the schedule after consultation with only Rugby Australia after the initial plan to hold the championships in New Zealand fell through due to Covid restrictions.

The NZR wanted the tournament played over five weekends, and not six as has been outlined. Its reasoning is that due to New Zealand’s Covid-19 protocols, which require a 14-day quarantine period, returning All Black players would miss Christmas with their families.

“We had a scenario that we’ve been focused on of New Zealand and Australia being able to play the tournament across five weeks, and it would have been the same had it been played in New Zealand,” said NZR chief executive Mark Robinson.

“We were committed to the Australians being back at home with their families before Christmas. Clearly, over the past few days there have been some developments that mean the commitment to that [idea] wasn’t as strong, and we’ll keep working through that with Sanzaar and Rugby Australia. I think there are some commercial considerations at play.”

The final match of the series is the Wallabies against the All Blacks in Sydney. Robinson did not rule out the All Blacks pulling out of that fixture so players could be home in time for Christmas, although that clearly remains a last resort.

“We’re looking at a whole lot of different options at the moment,” he said. We’ll keep working with Rugby Australia and Sanzaar on those. We’ve raised a lot of those during the past few days.

“We need to just take some stock now, go back to our people, and have a conversation with the team and management and see where it sits with them, and then take things from there.”

South Africa still not sure about participation

After six months of lockdown, SA Rugby would have been forgiven for sending out a gushing media release about the “excitement” and “honour” players were feeling about the upcoming Rugby Championship. But there was nothing, and not because it was a public holiday. It was because there are still many debates raging on at SA Rugby Plattekloof headquarters about sending an underprepared and inexperienced squad to defend the world champion Boks’ honour.

European-based, World Cup-winning Bok players have been felled like unattended tackle bags in recent weeks. World Cup star flyhalf Handre Pollard is out for six months with a knee injury, as is lock RG Snyman. The latter might actually be out of action for nine months and is in a race to be fit for the British and Irish Lions series in July. Fellow locks Lood de Jager and Eben Etzebeth are also out with long-term injuries.

Back in South Africa, locally based Bok hopefuls are only playing their first match in six months this weekend. The Stormers squad had a 60-minute contact practice match last Friday and it was obvious, despite the welcome physicality on display, that SA’s best players are well off full-match fitness. New Zealand and Australian players have been taking contact practice for more than three months already.

Potential Bok players couldn’t be in worse shape. Collectively, the Boks would battle to beat an egg at this exact moment, let alone the All Blacks.

Saturday’s post-Covid-19 friendlies at Loftus Versfeld – or in marketing speak, Superfan Saturday – will give an indication of just how far behind the players are. Bok coach Jacques Nienaber will be an interested and worried spectator as he has his first look at players in months.

“The last games our players were involved in was back in March, and there has been a lot of change in the world since then,” Nienaber told Daily Maverick.

“New Zealand will definitely have the advantage. Resting does have its advantages, but no player has become better by not working on their game.

“It’s one thing to freshen up a body, which is necessary, but it’s another thing to stay on top of your game, develop your skills and become stronger and fitter while you are sitting around. New Zealand players are getting better because of the competition they have had.

“Obviously the situation is not ideal, purely because we had everything planned out for a four-year cycle in terms of our strategic goals,” Nienaber said.

“Those goals will stay the same, but the method of how we get there has to change. We will have to adapt on the run to reach those goals.” DM