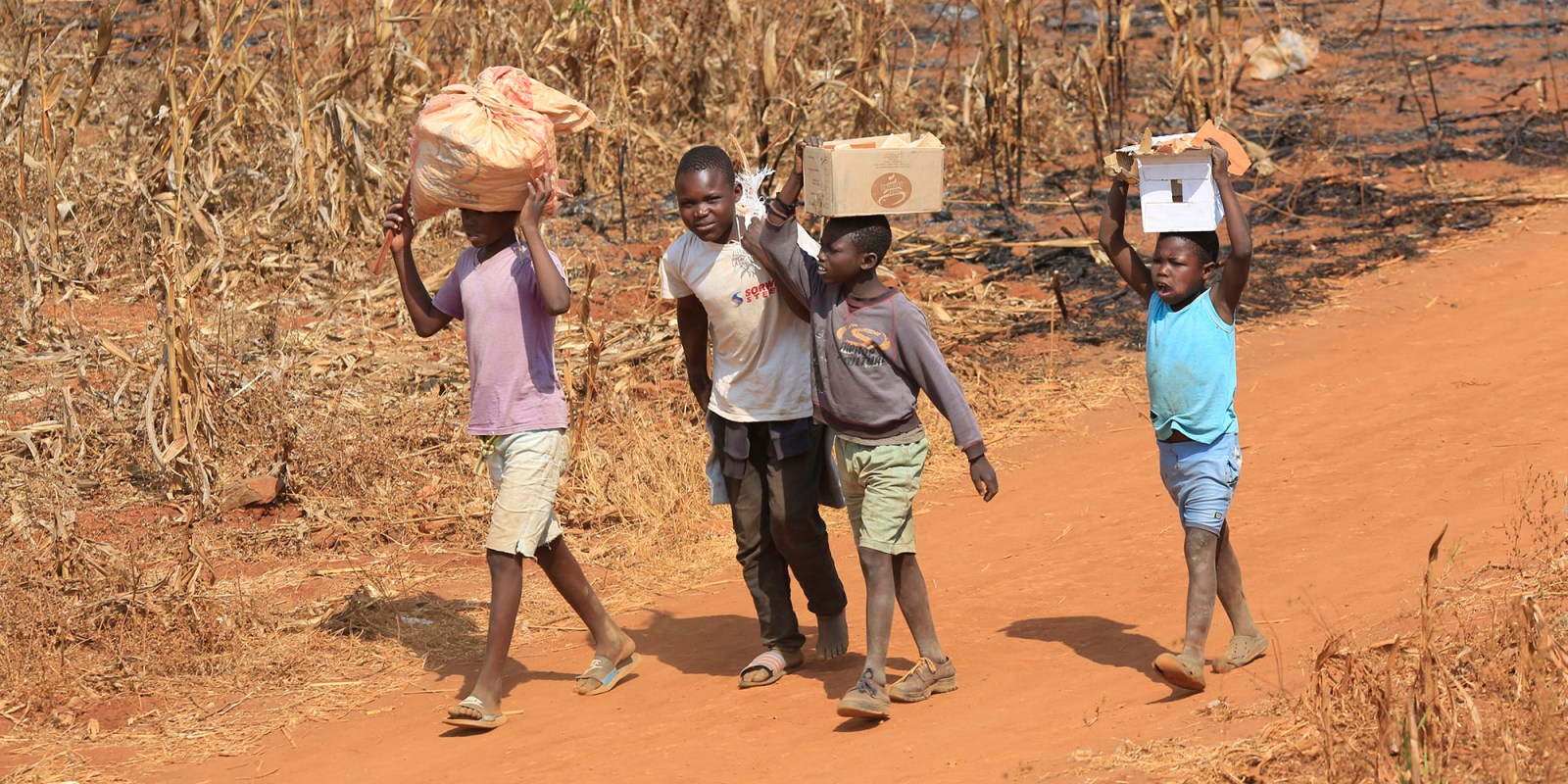 After Emmerson Mnangagwa’s 22 September announcement that schools would reopen, his government is on a collision course with teachers’ unions who have declared their members will not return to work. Among their demands are better pay, adjusted working conditions and allowances – not surprising considering teachers in Zimbabwe are earning the equivalent of $40 per month in local currency.

Zimbabwean students sitting for their final examinations this year could return to class on Monday without their mentors as the country’s teachers are threatening to boycott classes if the government fails to meet their demands.

President Emmerson Mnangagwa’s administration announced on Tuesday 22 September that students sitting for Grade 7, Ordinary and Advanced Level Zimbabwe Schools Examinations Council (Zimsec) examinations would be required to return to class on Monday 28 September to start preparations for their final examinations. Other non-examination classes would then return to schools in phases as the government eases Covid-19 restrictions, according to Zimbabwe’s information minister Monica Mutsvangwa.

Schools and other businesses in the southern African country had been closed since March this year as one of the measures put in place by Mnangagwa’s administration to contain the spread of Covid-19.

Following the government’s announcement to reopen schools, nine teachers’ unions declared that their members would not return to work, demanding better pay and an adjustment of working conditions and allowances, putting government’s preparations for the examinations in jeopardy.

“Reaffirming the position that the economy has fully redollarised, with prices of most goods and services pegged in US dollars, including those offered by government itself (and) aware that all teachers are financially crippled and have no capacity to return at their respective schools on 28 September, we urge the government to urgently expedite consultations with all teachers’ unions with a view to sharing ideas on the way forward before the opening of schools. This is informed by the fact that teachers’ unions are a key stakeholder in the education sector and represent the very people who are implementers of government policies,” reads part of the joint statement from teachers’ unions.

Primary and Secondary Education minister Cain Mathema told state media that he had consulted (Govt to announce schools opening dates this week – ZBC NEWS ) the teachers’ unions over the reopening of schools – a claim that the unions have denied. Teachers also called on Mnangagwa’s administration to restore the purchasing power parity of teachers’ salaries pegged at $500 to $550, implementing meaningful education sector-specific allowances commensurate with teachers’ responsibilities and status.

Raymond Majongwe, general secretary of the Progressive Teachers Union of Zimbabwe, told the Daily Maverick that Zimbabwean teachers were earning an equivalent of not more than $40 a month in the local currency.

“We are not charity workers but professionals who deserve decent salaries, not this current situation where one’s salary is determined by his or her physical fitness. How can a soldier who spent six months of physical training earn more than a qualified teacher who spent years in training? This discrepancy must be addressed going forward,” said Majongwe angrily.

Apart from better pay and an adjustment of working conditions, the educators are also demanding that they be paid a Covid-19 allowance that would be a product of negotiations between government and teachers.

“If schools reopen during this Covid-19 period, it entails that teachers will be frontline workers who deserve a meaningful Covid-19 allowance.”

The statement sets government on a collision course with teachers whose fellow civil servants were given an allowance of $75.

Some parents, like Tendai Mukonoweshuro, whose 16-year-old twins are expected to sit for their Ordinary Level examinations this year, said Zimbabwean authorities should put all their systems in place before allowing children to return to school.

When ZCTU called for nationwide protests over fuel hikes in January 2019, the Mnangagwa administration responded by deploying armed police and soldiers, resulting in several protesters being arrested while others were shot: Zimbabwe protests after petrol and diesel price hike.

“They (government) must explain to us all the measures they are putting in place at schools so that our children are not exposed to Covid-19. We also want them to deal with their standoff with teachers because it is painful to lose our hard-earned money to pay school fees when our children are going to school to sit in the sun or play in the school grounds,” said Mukonoweshuro.

Health minister Constantino Chiwenga, who doubles as the country’s deputy president, was not available for comment. However, information minister Mutsvangwa assured Zimbabweans that authorities were doing all they could to ensure that learners returned to a safe environment.

“Progress has been made on the comprehensive logistical plan for the coordinated, accelerated completion of the schools’ WASH project, the supply of and distribution of personal protective equipment, hygiene kits, disinfectants, and infrared thermometers to all public schools. Most of the districts are reporting improved levels of preparedness by schools,” said Mutsvangwa.

Research secretary of the Amalgamated Rural Teachers Union of Zimbabwe, Gerald Tawengwa, told this publication that Zimbabwe’s once-vibrant education system was already troubled before the Covid-19 pandemic as a result of multiple crises, including the impact of Cyclone Idai, the austerity measures under the country’s Transitional Stabilisation Programme, corruption and persistent droughts. According to the Zimbabwe education sector cluster report, issued before the outbreak of the novel coronavirus, more than 3.4 million children of schoolgoing age required emergency and specialised education services in 2020.

“Access to education was severely compromised since Zimbabwe has no remote learning policy, no supporting infrastructure and teachers are incapacitated to deliver remote learning as students have no required gadgets and access to internet, especially in rural communities,” said Tawengwa.

While teachers have declared incapacitation, the country’s main labour body, the Zimbabwe Congress of Trade Unions (ZCTU), is also threatening mass action to demand wages above the poverty datum line.

“We went around the country and all workers are clear that we must engage in mass protests because they are failing to cope with what they are earning. We had initially planned to hold these protests at the beginning of the year but we couldn’t get into the streets when the Covid-19 pandemic came. Now that the government is removing the restrictions associated with the pandemic we will be in the streets as soon as possible to demand living wages,” said ZCTU general secretary Japhet Moyo.

“We have a government that has a minister that when we sit with him at the Tripartite Negotiating Forum (TNF) as government, business and labour, we agree on something but when he returns from cabinet meetings he will be singing a different tune,” added Moyo.

When ZCTU called for nationwide protests over fuel hikes in January 2019, the Mnangagwa administration responded by deploying armed police and soldiers, resulting in several protesters being arrested while others were shot: Zimbabwe protests after petrol and diesel price hike.

Meanwhile, Zimbabwe’s labour minister Paul Mavima (who represents government at the TNF meetings), says he would soon engage business and labour with a view to hearing their concerns.

“We had not had a chance to meet (with business and labour) at the Tripartite Negotiating Forum due to the Covid-19 pandemic but we will convene a meeting soon to deal with all the outstanding issues,” said Mavhima. DM

Frank Chikowore is a journalist based in Harare. He contributes to several international media houses.