By Centre for Analytics and Behavioural Change• 24 September 2020 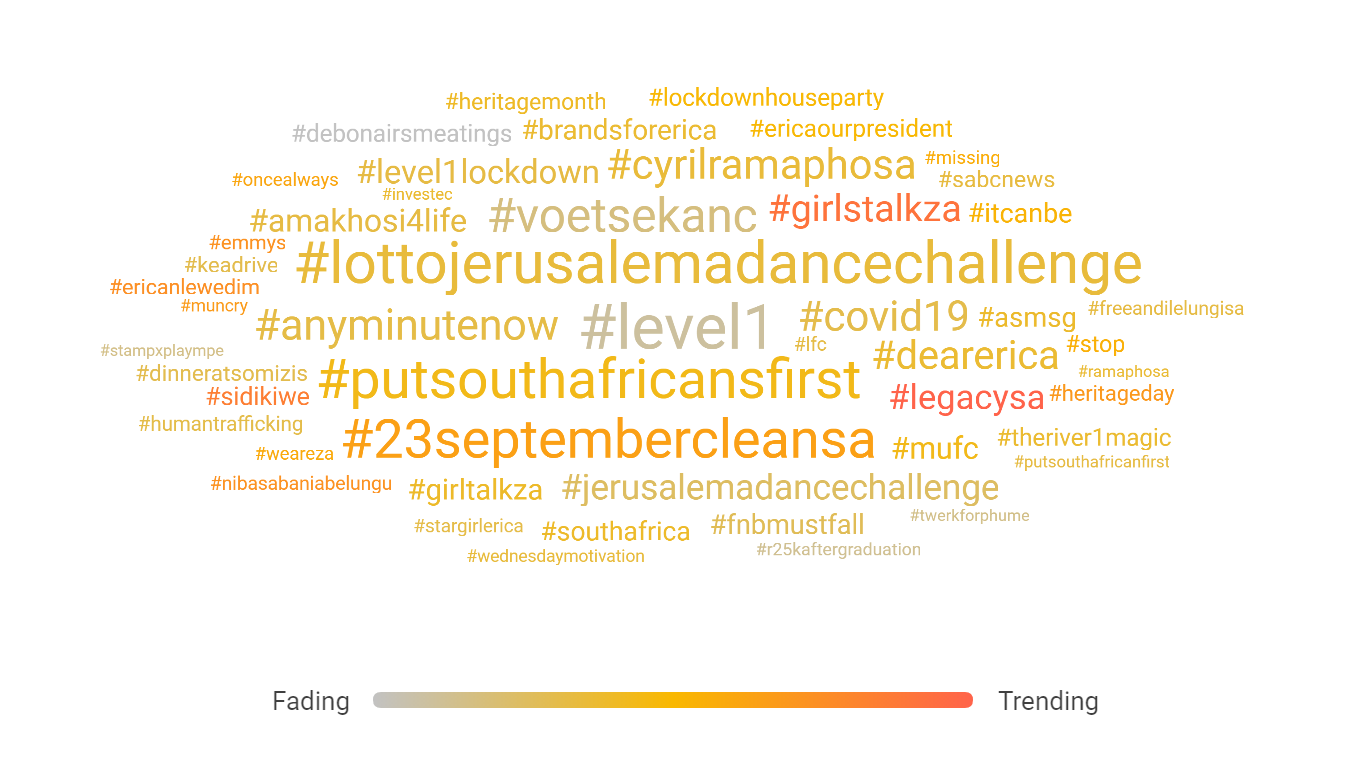 This is a summary of the trending, highest impact, and most active themes and their narratives related to social cohesion and division in South African public-domain social media conversations from 16 to 22 September 2020.

Two hashtags drove a mass of xenophobic conversations on Twitter leading up to a protest march in Pretoria on 23 September.

#23septembercleansa and #putsouthafricansfirst featured first and third respectively in the list of top 10 trending hashtags for the week.

Many of the tweets that used these hashtags presented unproven allegations or totally inaccurate information to support their xenophobic statements.

@landback_ , who also goes by the name “Make South Africa Great Again” was the top contributor to tweets that included the hashtag #putsouthafricansfirst.

Last week the account tweeted a post by @SAPoliceService who reported that “Durban #Hawks seize about R154 MIL worth of drugs at Simbithi Eco Estate on Tuesday, 15/09”.

Publicly available information about the drug bust did not identify the occupants of the up-market house. But @landback_ immediately blamed African foreigners, tweeting: “Dear President @CyrilRamaphosa Look what your African brothers are feeding our kids! Why must we accept this nonsense in our country? Deport these things NOW! #PutSouthAfricansFirst”. 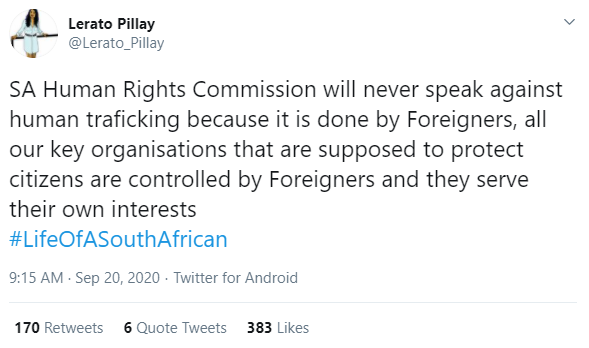 This account tweeted and retweeted more than 30 times on 22 September, using hashtags like #PutSouthAfricansFirst, #NigeriansMustGo, #XenophobiaSeMoer, #Sidikiwe and #23SeptemberCleanSA. The account tweeted: “WE WANT OUR COUNTRY BACK!” along with a video of men with weapons protesting aggressively. But just four hours before this post, they had tweeted: “Patriots I want to urge everyone who will be attending the march tomorrow to remain peaceful throughout the march and afterwards. Tomorrow’s march has nothing to do with attacking foreigners. We are only fixing our great Country. No to violence! #PutSouthAfricansFirst”.

The march was scheduled for 23 September 2020. Protestors were expected to march to the Nigerian embassy. By midday on Wednesday, the marchers were on their way to the embassy.  (After all the hype, a Daily Maverick reporter on the scene counted about 50 people taking part in the march).

The twitter account that contributed the most posts that included #23Septembercleansa for the week was @MB_Khumalo.  This account retweeted a post that read: “Politicians are long on talk and very short on action when it comes to protecting the interests of South Africans. They’ve failed us, so it’s up to citizens to fight the immoral amongst us #23SeptemberCleanSA”. Then, 10 hours later the account began warning protestors: “#23SeptemberCleanSA police will be attacking South African citizens who will be marching tomorrow”, followed at 22:23 by this tweet: “#23SeptemberCleanSA movement is under attack for fighting for our own country. They are planning to destroy the March tomorrow, BE CAREFUL…”.

Account @lerato_pillay, who has been responsible for spreading much of the xenophobic conversation on Twitter recently and has now been identified as an expelled SANDF member, urged protestors: “#23SeptemberCleanSA will happen dark or Blue, and going forward everyday there must be action”.

@tracy_zille, who has frequently tweeted socially divisive posts, tweeted images of incomplete buildings, saying: “Foreigners in this country brought us nothing but insults and humiliation! Massive destruction to our infrastructure. What in the world of humanity is this nonsense!? #23SeptemberCleanSA #VoetsekNigerians #VoetsekSAMedia.”

First National Bank came under fire this week for discriminating against black people after the bank closed accounts that were raising funds to help Public Protector Busisiwe Mkhwebane pay her legal fees. The bank claimed that they were exercising their contractual right to terminate its banking relationship with her. 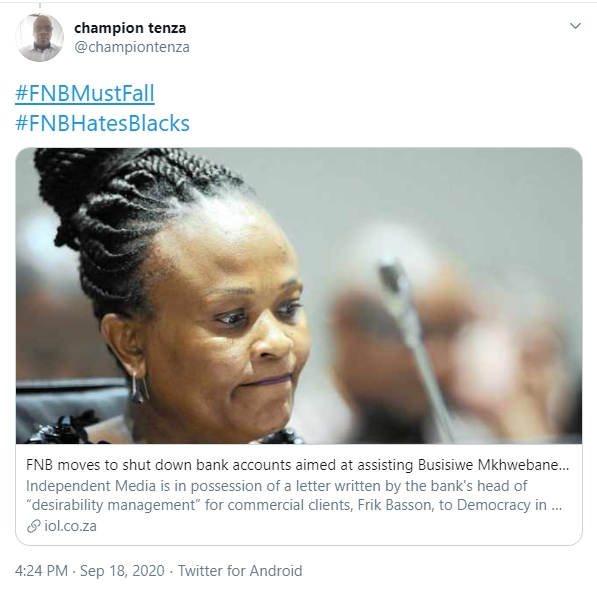 @hostilenativ pointed out that FNB held the accounts of several racist organisations such as AfriForum, but shut down the account of the protector of Black people.

@Championtenza claimed that FNB was managed by politically corrupt people who had the tendency to discriminate against black people. @Championtenza shared a series of articles on how the bank discriminated against Black people through malpractices like unfair interest rates.

@tshpamotshewa shared a video of Julius Malema talking about the benefits of having a State-owned bank. The post was retweeted 575 times and liked 1 200 times.

@RADIOCEDRIC commented that a State-owned bank would only benefit politicians, not black people. 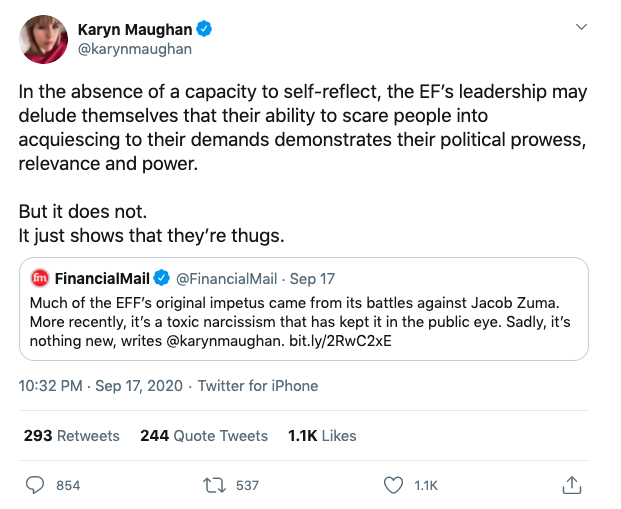 Journalist Karyn Maughan sparked controversy on Twitter with a tweet referring to the EFF as delusional “thugs.” Her post gained moderate traction with 1 100 likes and 300 retweets. EFF Secretary General Marshall Dlamini commented on the post, writing: “you are a racist pig.” EFF MP Naledi Chirwa tweeted: “This is exactly how white women call on the police because they see Black men in ‘their’ neighborhood. We’ve seen countless videos of Karens doing this. Painting Black people as thugs when thuggery is in their DNA.” The post, which garnered modest traction, included an offensive racial slur. DM