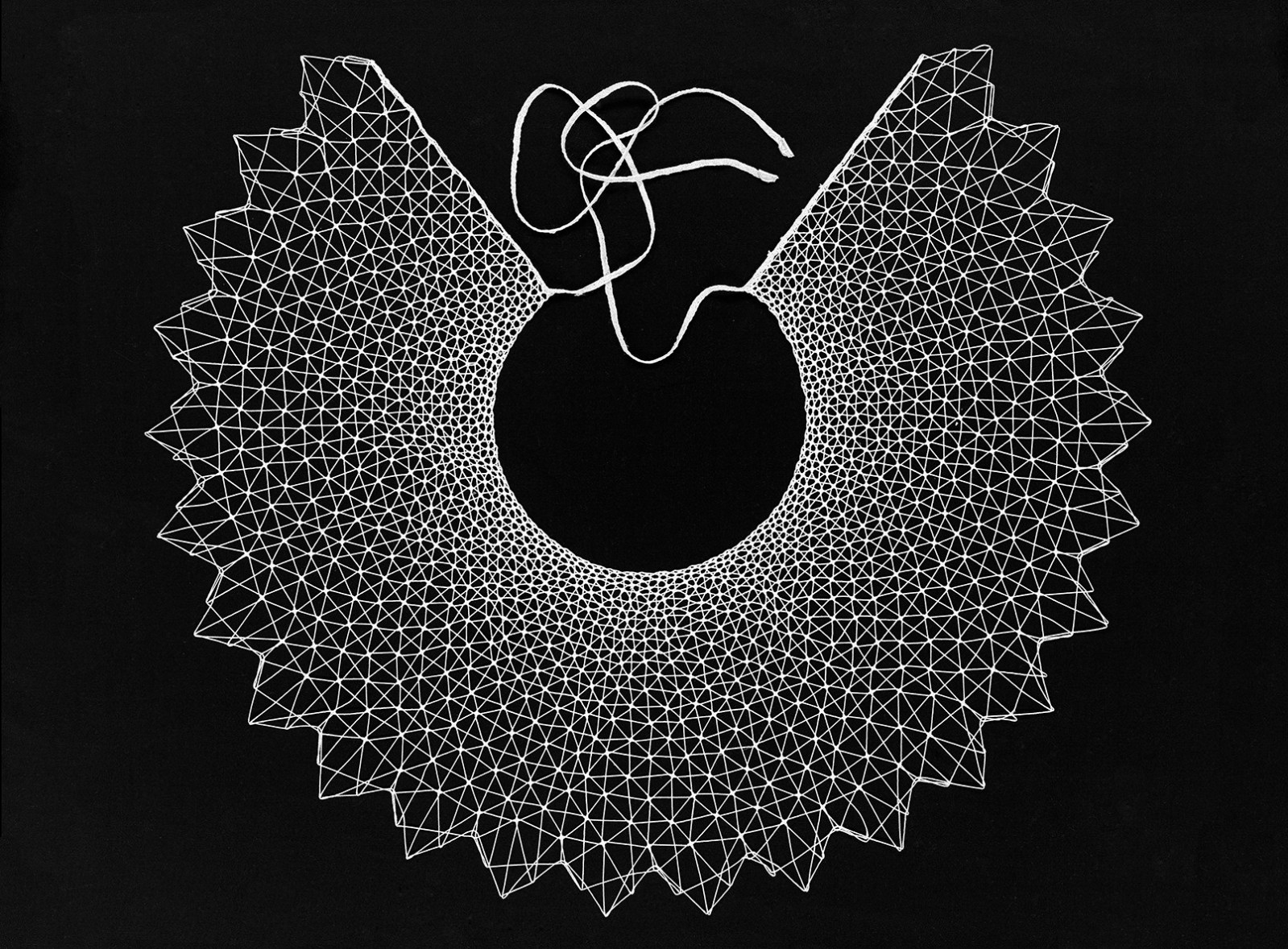 The bobbin-lace collar made by Lieberman for Ruth Bader Ginsburg, which former Constitutional Court Judge Albie Sachs handed to RBG when he visited his friend in Washington two years ago. The collar is made from white silk thread with silver tips. (Photo supplied)

A contemporary handmade lace collar connects South Africa’s brilliant Constitution to the towering figure of Ruth Bader Ginsburg, connected friends for one last time, and connects the importance of art and symbols in the fight for what’s right.

For a long time, Joburg conceptual artist Kim Lieberman has been thinking about what makes some people true leaders. She’s also been thinking about lace for more than a decade, because her artistic curiosity about interconnectedness and what passes between people – post, money – led her to the arcane art of lacemaking, which she now uses in so much of her work.

When she came across history about laws from the 17th and 18th centuries that made it illegal for European peasants to wear lace, she wondered about the qualities that made good leaders. In her opinion, these qualities weren’t necessarily passed along in bloodlines. What she considered to be “royal thought worth framing” were qualities of honesty, integrity, ethics and morality.

Since lace collars frame the head, the supposed seat of thought, she wondered “Whose heads are we framing now, here in Africa?” and “Whose head would I frame?”

The resulting – and ongoing – work is a series called Why the collar? in which the silhouetted heads of people she admires have antique or handmade lace collars placed below them in a contemporary fashion. Not all of the people she has chosen are well-known.

Two years ago, while wallowing in a warm, healing mudbath on an island off the coast of Sicily, Lieberman met a woman who, when she found out what work she did, asked her whether Lieberman was aware of Ruth Bader Ginsburg’s relationship to her famous and varied collars.

Much has been written – and repeated in the past week since her death – about RBG’s relationship to her jabots, the ornamental frills, or decorative pieces, she was famous for wearing around her neck over her black judge’s robe. It had become a statement, a kind of raised fist for the integral place of female thinking at the highest levels of society.

Lieberman’s mind went into overdrive. She contacted Albie Sachs, whom she knew via an artwork called Constellations that she’d made for the Constitutional Court in 2008, to find out whether he had any ideas how she might be able to get a lace collar to RBG.

What she didn’t know was that Sachs and Ginsburg were friendly. Nor did she know that RBG had written the introduction for the book called Art and Justice: The Art of the Constitutional Court in South Africa, in which Constellations had featured.

RBG was, in fact, an outspoken admirer of the South African Constitution.

“It was August 2018,” Lieberman said. “Albie was going to the States in November and he said he’d ask RBG whether he could visit her in Washington where she lived so that he could deliver the collar into her hands himself.”

Work began on the ancient craft, which Lieberman calls an “extreme craft”, of making the lace collar. She designed it, using the complex mathematical formulae on which the creative work rests, and then wove the lace herself, using her wooden bobbins.

A distinguishing feature of Lieberman’s lacemaking is that she works with what is called “wild” or “chaotic” ground.

The “ground” in lace is the background net that traditionally holds the more dominant features of the lace together. Usually, these are regular, but Lieberman is attracted to the “less static” pattern of wild ground, which she says provides a dynamism and movement to the final piece.

“The ground of the lace is the background and I liken it to the background that goes on in our lives. It’s the matrix. It’s also about the flow of invisible information that goes between us, and the way we’re connected. Wild lace. Wild ground. Wild thought.

“I used the same pattern, which is the one that makes visual and conceptual sense to me, for RBG’s collar because I wanted to insert some of myself into the gift, but I also wanted to represent her wild integrity.”

By “wild integrity”, Lieberman means “somebody who is so hardcore, so radical, that they just persevered single-mindedly – or I should say expansive-mindedly – in doing to the right thing”.

Lieberman said: “I loved a quote I read earlier this week, that RBG pushed open doors and left them open.”

The well-known Africans whose heads Lieberman framed – Thuli Madonsela, Yvonne Mokgoro and Albie Sachs – all share a certain inability to be “tamed and controlled” with Ginsburg.

“And that ‘non-controlled’ and ‘untamed’ has been very beneficial to humankind.”

In an interview in 2015, RBG said that her favourite collar was a white beaded one from Cape Town. Three years later, she was handed another from South Africa, when Sachs went to deliver it to her at her home not long after she’d fallen at her office at the Supreme Court and broken three ribs.

Sachs, after this visit with Ginsburg, wrote Lieberman an email.

“I told RBG it was great to see her in such good form, that even the strongest non-believers were praying for her recovery, and that in South Africa the news of her mishap was reported so widely you would have thought it had been the Fall of the Roman Empire,” Sachs wrote.

In the email, Sachs said he gave RBG the gifts he’d brought and, after explaining Lieberman’s interest in using lace in her art, he gave her “the last object in the soft dark packing”.

“She gasped,” he writes, “literally gasped, as did her secretary and her step-grandson, who is a law student. She felt and touched the necklace, placed it around her neck, and put it back on the soft dark cushion. She said she wasn’t sure if she would wear it or display it as an art artwork.”

Lieberman says that it struck her, now that RBG had died, that she’d been able to facilitate a last meeting between Sachs and Ginsburg.

“As a friend said to me, it’s extraordinary that by making this collar, I was woven so delicately into their friendship.” DM/MC