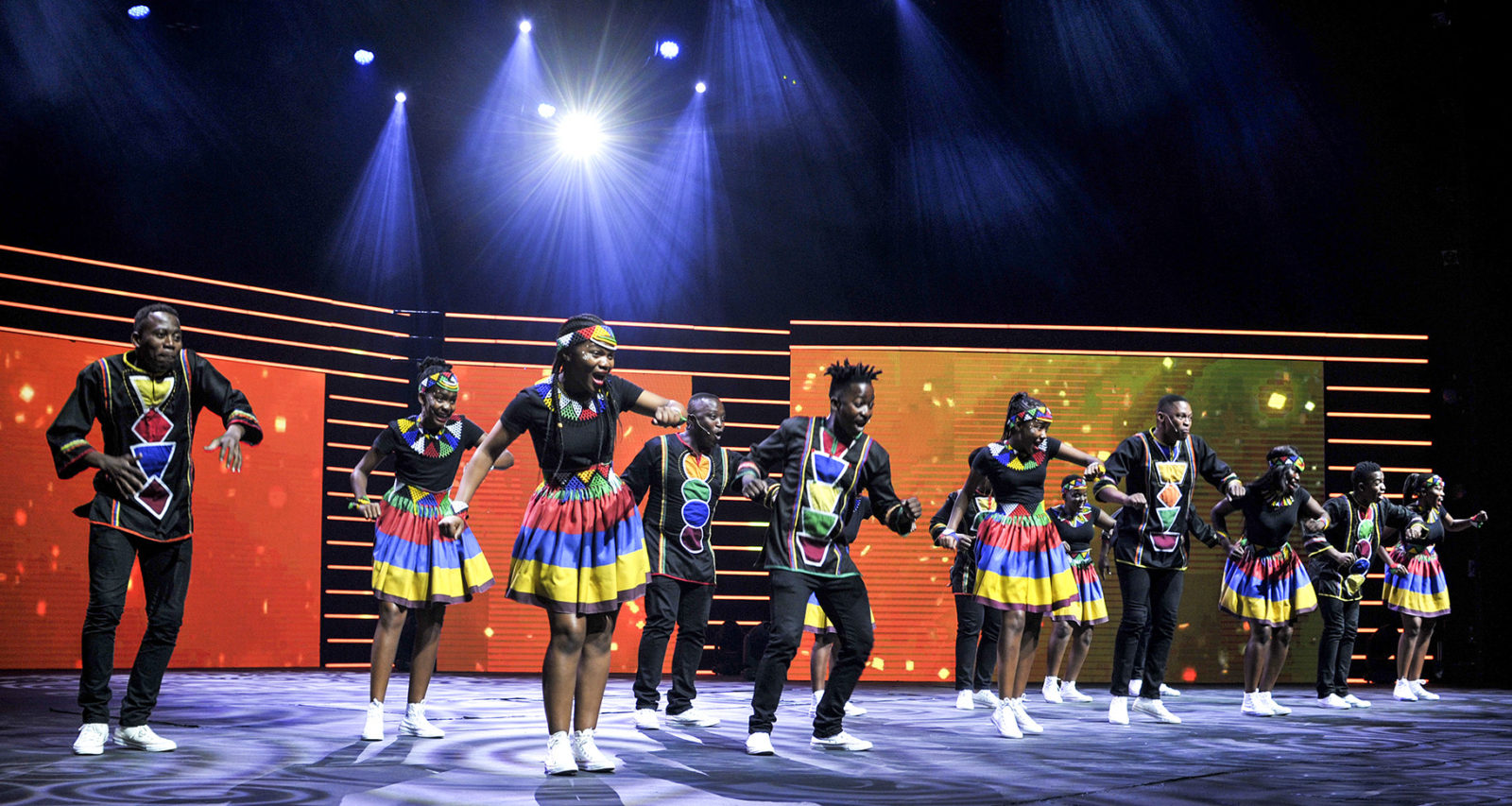 The Ndlovu Youth Choir famously stole the hearts of the America’s Got Talent judges and audience in 2019 with their moving rendition of ‘My African Dream’. (Photo by Gallo Images / Darren Stewart)

Something special is happening at Constitution Hill (ConHill), something that is bringing together South Africans from across our country’s landscape, crossing cultural, class and racial divides. That something is called ‘We, the People’.

“We, the people” is the rousing call of South Africa’s constitutional preamble, and the title of ConHill’s latest campaign, which was ignited with a T-shirt collaboration between ConHill and Tshepo the Jean Maker, an emerging South African designer.

It was followed by the launch of the “people’s version” remake of the legendary Hugh Masekela song Thuma Mina. On 24 September, ConHill Trust will launch “Our Struggle, Our Freedom, Our Constitution”, an online exhibition and archive of the story of the making of the Constitution and the Constitutional Court. To crown this historical, cultural, musical, visual and creative honouring of heritage will be a rendition of the preamble to the Constitution by the Ndlovu Youth Choir (NYC).

The Ndlovu Youth Choir famously stole the hearts of the America’s Got Talent judges and audience in 2019 with their moving rendition of My African Dream. The choir is 43 members strong, and their ages range from 14 to 29. Maverick Citizen spoke to two members of the choir, 26-year-old Sandile Majola and 28-year-old Rachel Mahlatse, both from Elandsdoring in Limpopo. The choir’s offering for this campaign is that of meshing the preamble and national anthem together into a melodic expression of diversity and inclusion.

Majola said, “Being part of such a prestigious event at Constitution Hill was very important and I feel very privileged. It’s very important for young people to know their history, so that they know where they’re coming from. And then they’ll know where they’re going. If you know your story then you’ll know how things should happen with your life and your future and how you plan everything.”

He said reciting the words of the preamble was an emotional moment and that hearing the story of Winnie Madikizela-Mandela was “so powerful, so painful. I got a chance to live the history, standing there in that cell. And, you know, knowing what happened, what actually went down, and to tell those stories now, years later, it was very beautiful, and I feel very, very honoured that Ndlovu Youth Choir made it, we are part of history.”

Majola said he felt he was representing young South Africans from across the country by being part of the campaign.

Lauren Segal, who coordinated the choir’s involvement on behalf of ConHill, said: “We were immensely excited when the NYC agreed to be part of our project to bring the preamble to the Constitution to life and ensure that it enters the hearts and minds of all South Africans. Who better to perform it than a group of young teenagers and adults from a disadvantaged community in Limpopo who represent the very best of South African talent and the ability to succeed on an international stage?

“The choir’s energy and vigour when performing, their astonishing voices and their incredible unity on stage are exactly the qualities that we wanted to imbue for the performance of the preamble. Ralf Schmitt, the group’s musical director and their producer, has injected an incredible passion into the production through his musical arrangement. To see the choir singing at Constitution Hill and in the Constitutional Court has been a highlight in our journey so far.”

A rather shy but excited Rachel Mahlatse told Maverick Citizen she joined the choir because she finds comfort in singing. Mahlatse said she found the immersion into the story of the Constitutional Court interesting, before they started filming their rendition of the preamble. She said the experience of singing the preamble made her emotional, and that she wished more young people could get to know more of South Africa’s history and where we come from.

Bringing the musical elements of the story of ConHill to life is film director Lindokuhle (Lindo) Langa, 23. Langafirst visited Constitution Hill when he was just 10 years old, with his grandfather, the late Pius Langa who was chief justice of South Africa from 2005-2009. The first time he saw a professional camera was when his grandfather was being interviewed at the Constitutional Court. He said up until now that had been his last interaction with the court and that he never thought he would get to do work where his grandfather had also dedicated years of his life. He describes being a part of this campaign as a personal “full circle” moment for himself and his family.

Approached by Laurence Horwitz of Mama agency with the concept, Langa says that working on Thuma Mina had to be approached with “a headspace of positivity and unification and to really take the spirit of the song and imbue it into the work”.

He says this was because it was during a period of great uncertainty – it was shot during the Covid-19 crisis peak. The idea of shooting the video at ConHill seemed to flow naturally because the precinct contained all the historical context needed for the song as well as the visual associations.

He says his was a job of “being the communicator between the visuals and the song itself”, as he worked with musical giants Vusi Mahlasela, Thandiswa Mazwai, Zwai Bala and Abigail Kubheka. He was also alive to the fact that the song needed to have generational appeal while still doing justice to the original. Maverick Citizen can attest to the show-stopping visuals and overall goose-bumps feel of the reimagined Thuma Mina.

Speaking of the preamble, Langa says, “We the people, united in our diversity… is quite a beautiful juxtaposition of a space that was for a very long time a symbol of separation and oppression, and so for us to be able to flip the script on that is something that I feel is very important… in the same way that when the Constitution was crafted and my grandfather was there, they had to take a force that was used to oppress people and do the opposite, do away with some things and keep some things, it is a very powerful evolution.”

He says that after having done the tour of Constitution Hill a couple of times, “You can feel the heaviness and reverence of the buildings.”

Having seen what Langa had done with Thuma Mina, Segal approached Langa to work on the preamble with the Ndlovu Youth Choir. He says the brief was to have a more cinematic approach to the preamble and that it made sense to have it in song, as South Africans are a very musical nation, and whether we are happy, angry or sad, music gives expression to our emotions. He describes the preamble as “flowing like a poem”, and incorporating elements of sound into it with the choir added the interesting textural elements of marrying sound and visuals.

Discussing the video, Langa says: “Thematically we wanted to tell a story of the history of our country, so we start in the Women’s Jail and work our way to the outside of the court and then into the court, to show from the oppression of the past into the democracy of the future.”

He said what really brought the spirit of the campaign home for him was working with members of the choir, who are all young, and it illustrated to him that the Constitution is for everyone and not just for the old.

“Working with these young performers felt like repackaging a gift from our elders to our contemporaries and that’s where the heart of the job lies for me,” said Langa.

Something special is indeed afoot and it is sure to unite us all in our diversity. DM/MC

We will need to learn how to socialise safely, says Dr Anthony Fauci

Family ‘dumped’ in Wellington can’t travel to work and school

Liezl Human for GroundUp • 10 hours ago

PATH and SAMRC and CSIR • 4 hours ago